The Guardian view on Poland’s challenge to EU law: crossing a line 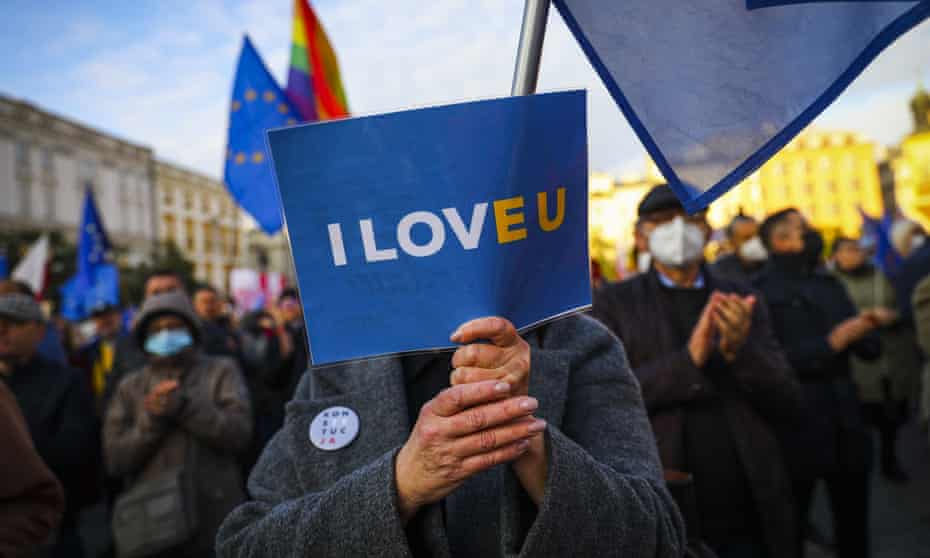 “We are staying!” – that was the slogan of choice for more than 100,000 protesters who marched through Warsaw on Sunday, expressing their fury at the idea of a possible “Polexit” from the European Union. For now, there is little reason to doubt that they are right about that. An overwhelming majority in Poland support EU membership, and the economic benefits enjoyed since it joined in 2004 are both unarguable and substantial. Even a conservative-nationalist government that specialises in grandstanding and confrontation would see taking the country back out as political suicide.

Provoking a serious, open-ended crisis of relations is another matter, however. The decision by the Polish prime minister, Mateusz Morawiecki, to challenge the compatibility of EU law with the country’s constitution has far-reaching implications. Mr Morawiecki asked Poland’s constitutional tribunal – which has been packed with pro-government judges – to make a ruling on the subject, having made it clear that he disputed Poland’s obligations under EU law. Last week, the tribunal’s judges duly found that on issues such as human rights and minorities, cooperation between member states, and the status of the European court of justice, the national constitution had primacy over the EU treaty that Poland signed up to in 2003. The ruling amounts to a brazen attack on the legal underpinnings of the EU’s common system of values. This is why France’s Europe minister, Clément Beaune, has said that Poland is running the risk of a “de facto exit” and others have judged that the Polish government is “playing with fire”.

European leaders must search for a way to respond robustly without fanning the flames and handing Poland’s nationalist politicians a cause célèbre with which to stoke resentment. It seems likely that the European Commission will continue to stall on the disbursement of EU recovery fund money to Warsaw. There is also a suggestion that regional development aid could be halted. Any attempt to suspend Poland’s EU voting rights would founder on the requirement for unanimity among member states – impossible while Viktor Orbán’s Hungary is around to say no. The pragmatic course of action for Brussels is to tighten its purse strings and hope that in elections due in 2023, Jarosław Kaczyński’s Law and Justice party will finally be thrown out, after eight years in power. In the meantime though, if the ruling is put into effect, it will deepen and consolidate Poland’s status as a rogue EU state benefiting from membership while rejecting some of the most important rules of the club.

The precedent set would come at a time when other high-profile challenges to EU law have either taken place or are being mooted. Calls to repatriate powers from the ECJ have become a theme in the French presidential election campaign. Michel Barnier, the EU’s former chief Brexit negotiator and a centre-right hopeful, has called for the restoration of France’s legal sovereignty on issues related to immigration. The consequences of the post-crash rise of the nationalist right are still rippling through the European body politic. It is a delicate balancing act, but EU leaders cannot allow Poland to up the ante without meaningful consequences.

It’s Boris Johnson’s path or Rishi Sunak’s way: the Tories can’t have both

Our society is troubled. Beware those who blame it all on big tech

The Guardian view on coral: sea creatures with charisma

The Guardian view on the Welsh heartlands: invest in their future