FOXBORO, Mass. — It’s not hard to spot Matt Patricia. He’s the only Patriots coach who wears a red hat. The whistle around his neck matches. And, of course, there’s the pencil tucked above his right ear. He’s usually standing a few yards behind the line of scrimmage with a play sheet in one hand and a walkie-talkie in the other.

There’s a lot to watch for as Patriots training camp rolls on — especially with the first preseason game on the horizon. The cornerback battle is important. The wide receiver depth chart, too. But eyes naturally flocked to Patricia on Monday. He’s the orchestrator of the reboot of this offense that remained in disarray.

All three Patriots quarterbacks — Mac Jones, Brian Hoyer and rookie Bailey Zappe — threw an interception. All three were under constant pressure. The running game struggled. The receivers didn’t get open. The incompletions mounted.

But at this point, it’s fair to wonder: Should we be worried about the Pats’ offense?

“Every day is a challenge,” Bill Belichick said when asked about the installation of the new offense. “We just try to build on yesterday and do what we can do today to get better and then build on it tomorrow. At different points in time, we kind of take stock in where we are and decide whether we want to add more in this area or add more in that area or whatever it happens to be. And so we try to do the things that we think are most important, most necessary that will help us win. And that’s just kind of what we do.”

On the one hand, it’s still early in training camp, still a few days from the first preseason game Thursday night against the Giants. The Patriots are replacing an offensive coordinator who held the position for the last decade. So, naturally, it was going to take some time as the offensive scheme was tweaked. And, let’s not forget, they’re facing a defense that finished among the top five in the league in every meaningful stat last year.

On the other hand, issues like this don’t typically fix themselves overnight, and the problems aren’t at one specific spot. The running game can’t get going as the line struggles to open holes in a scheme utilizing more wide-zone rushes. The passing game can’t get going because of some combination of leaky pass blocking and lack of receiver separation. There might also be some frustration from Jones, who had to throw the ball into the dirt a few times Monday to get out of poor plays. There’s only one more practice before Thursday’s exhibition opener. If the unit struggles on Tuesday and then against the Giants, the level of concern will ramp up.

The Patriots seem to recognize that. After a futile practice for the offense Monday, center David Andrews, a captain of this team and a stalwart on the line, let his teammates hear it, voicing his frustration.

“That’s just part of this,” Andrews said of the struggles. “There’s ups and downs. It’s training camp. Gotta go in, learn from it, see what we can do better. Can’t let today or any day derail anything in the future.”

On most plays in the Patriots’ 11-on-11 drills, Belichick stood right behind the offensive huddle, close enough to hear the play call Jones yelled out. He’s the one who concocted this idea to bring back Joe Judge and Patricia after failed head coaching stints and assign them roles on the offensive side of the ball. Judge is handling the quarterbacks, while Patricia leads the offensive line (and, to date, the play calling).

At some point, if these struggles continue, will Belichick second-guess that decision? Judge was a well-respected special teams coach. Patricia was a defensive whiz during his last go-round with the Pats, the mad scientist who became Belichick’s right-hand man. But now the two of them are tasked with replacing one of the best offensive coordinators in the business, suddenly running an entire side of the ball where they’ve had little experience.

Perhaps, then, hiccups should have been expected. After all, the offense is facing an impressive defense each day. Matthew Judon is regularly in the backfield. Jalen Mills is smothering.

But, still, Monday’s practice was far from what Patricia and Judge must have imagined when this installation began in the spring. While Day 10 of camp may have been the offense’s worst session yet, it’s not like the others have been so overwhelmingly successful.

Jones was sacked five times on 20 plays in full-team reps. He was intercepted once. Almost all of his completions came within 5 yards of the line of scrimmage. More than once, there were clear miscommunications that led to passes where no one was within 10 yards of the ball. 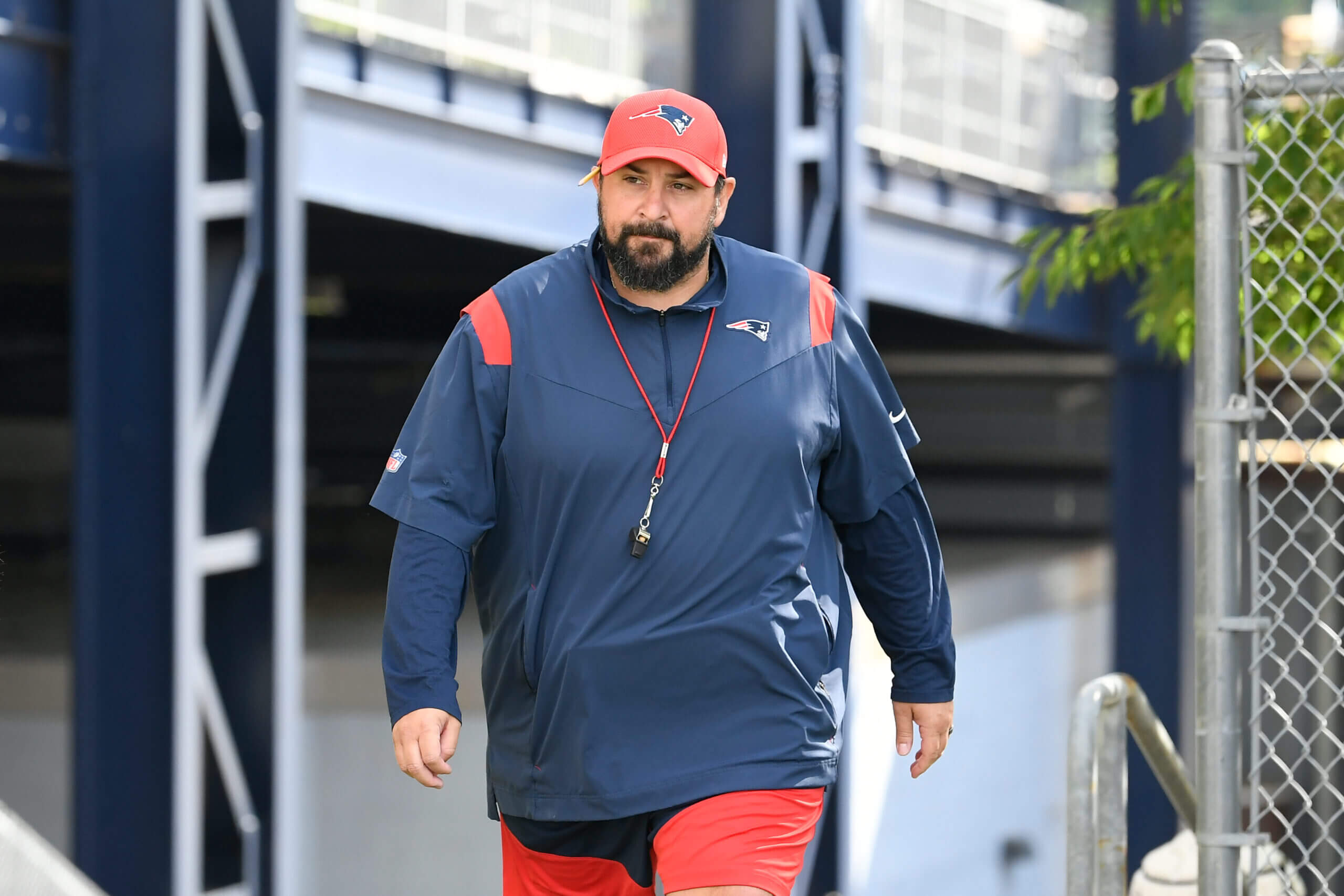 Perhaps the first few days of offensive struggles were easier to dismiss. There was the new coaching staff, the stout opposition it was facing, the fact that defenses often open ahead of the offense in those late July days.

But the concern is that the offense doesn’t seem to be improving as August carries on and the Sept. 11 season opener in Miami approaches.

Maybe Monday’s futility was partly due to the heat and humidity on the sun-soaked field, even during an evening practice. Maybe it was the wind. Maybe it was just one really bad day. Maybe Jones will get a few reps on Thursday against the Giants, the first-team offense will hum and these August concerns will be laughed off.

But the start of training camp at least opens the door for questions and apprehension.

Two coaches with little experience on offense are trying to install aspects of a scheme that’s sweeping the NFL thanks to coaches who have spent a lifetime studying it. There’s still time for everything to click for the Pats’ offense, but the point of concern is nearing.

Before Monday’s session, Belichick was asked if he’d abandon something that wasn’t working. Of course, he said. It wouldn’t matter if it were in training camp or during the season.

“If you’re spending time on something that’s not productive,” Belichick said, “then you need to change it or find something else.”

Why am I so tired and when is it time to see the doctor about it? A GP explains