Son Heung-min won the penalty for Tottenham’s first goal of Thursday’s north London derby, took the corner for their second and then scored their third at the start of the second half. But arguably his biggest contribution to his team’s 3-0 win was his triumph in his personal battle with Arsenal centre-back Rob Holding.

Son and Holding tangled repeatedly during the 32 minutes the Arsenal defender was on the pitch. Holding was booked for fouling Son after 25 minutes and then got a second yellow for sending Son to the turf seven minutes later. With Arsenal down to 10 men, they had no way of sustaining their fast start and it was easy enough for Spurs to pick them off and then shut down the game in the second half.

That in itself is a testament to Son’s own nous and skill. “I think we showed our experience, the experience in our squad,” Harry Kane said afterwards.

But Son’s success over Holding was part of an intricate team plan. All game Son kept making the same movement — dropping deep for the ball, by the left touchline, trying to tempt Holding forward out of position to challenge him. Son would turn, run infield and forwards, backing himself to beat Holding and exploit the space he had opened up.

It looked like a classic Conte “automatism”, a repeatedly drilled movement that the players have learned so they can manipulate their opponents around the pitch. A perfect little piece of Conteball.

And what was so striking about how Spurs did this was that before the games there were big worries about their build-up play. Everyone knows how important Cristian Romero is to Spurs, effectively a deep-lying playmaker on the right of their back three. Everything they do in possession goes through him, and so the news that he would be out with a hip injury, replaced by the less creative Davinson Sanchez, was clearly a blow.

But on Thursday evening, especially in the first half, much of Spurs’ best play came down the left hand side instead. And it fell to Ben Davies and Ryan Sessegnon to find Son in those positions where he could tempt Holding out of his position.

Tottenham could barely get a foothold in the game in the first 10 minutes, but the first time they did anything good was through precisely this move… 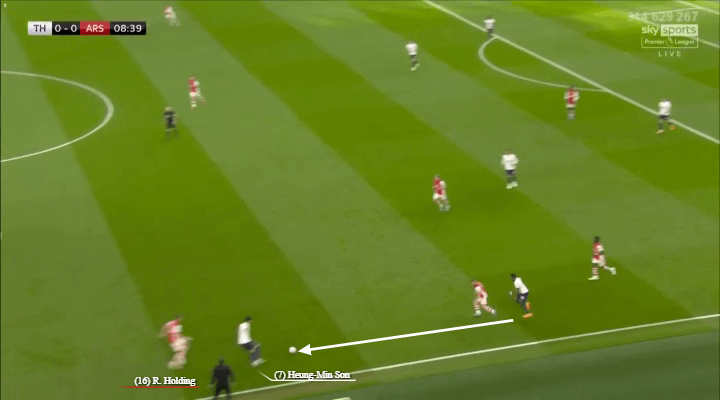 Son, for the first time — but not the last — came short for the ball wide on the left, dragging Holding out of defence to come to him. Sessegnon, at left wing-back for Spurs, fired the ball into Son’s feet… 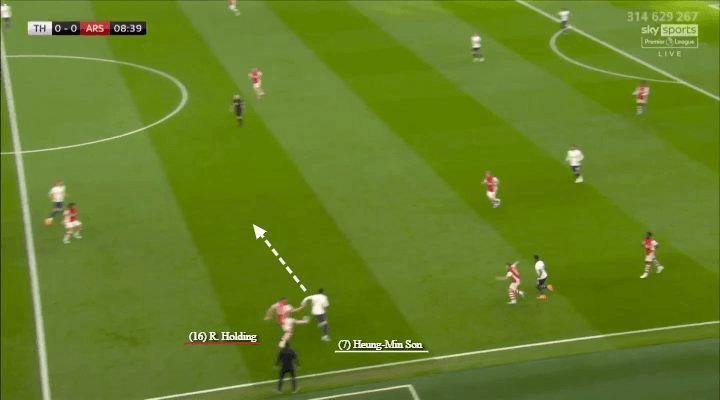 Holding comes to engage Son but he is not quite quick enough. Son turns inside and breaks infield into empty space — the run that he makes so often… 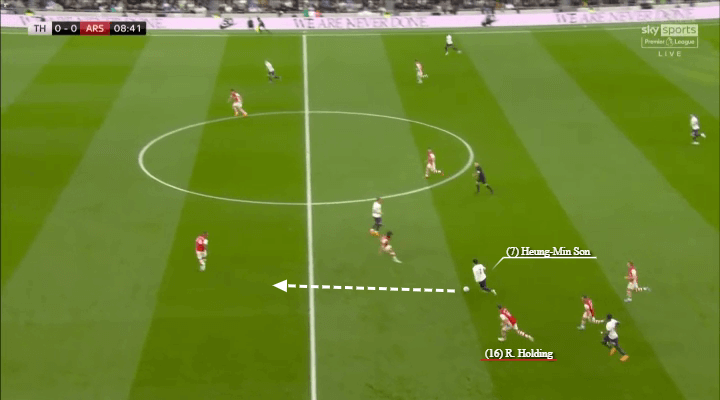 And then, as Son turns to face the Arsenal goal, he has a huge space in front of him to attack — the space where Holding was meant to be. Holding tries to recover, but Son is too quick for him. And even though the attack fizzled out into nothing, it was an early omen of that battle between Holding’s aggression and Son’s athleticism. 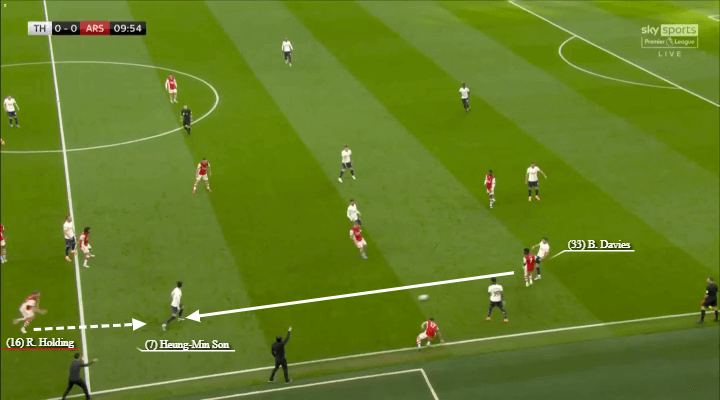 One minute later Spurs tried the same move again. Son came short, wide on the left. This time it was Davies, with added creative duties in the absence of Romero, passing the ball to his feet. And again Holding pushed up aggressively to try to challenge Son, trying to avoid the same outcome as last time… 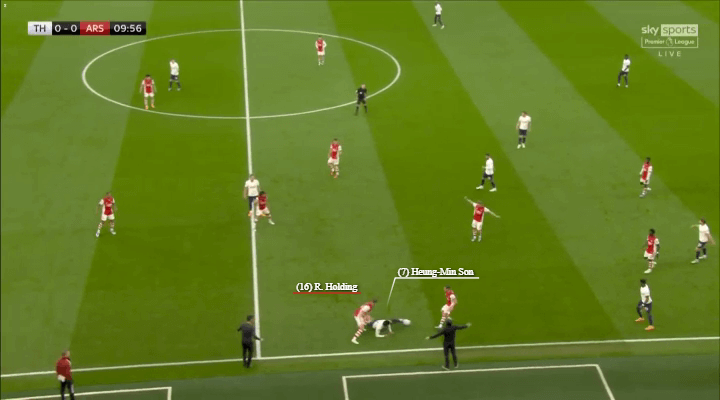 Holding, whether frustrated by the first incident or just clumsy, runs straight into the back of Son, giving away a free kick. It is a painful collision for Son, and Holding follows through with his knee as well. There is no card for Holding. It looks as if he is trying to unsettle Son with a bad challenge, but it was a risk for him to take given the possibility that the incident would be reviewed by VAR.

It is a reminder of what we learned one minute previously: that this is the most important physical battle on the pitch. 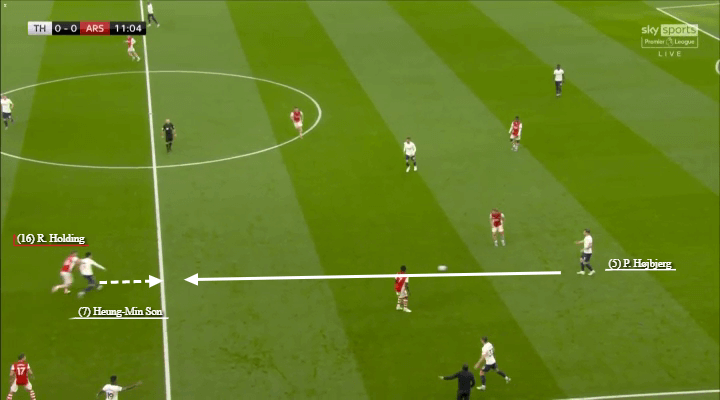 Just one minute after that, we get a third tussle between the pair. This time it is not Sessegnon or Davies but Pierre-Emile Hojbjerg who plays the pass into Son, again coming short for the ball, slightly more infield than in the first two incidents. Yet again, Holding is as tight as he possibly can be, and the two men fight for the ball on the halfway line. 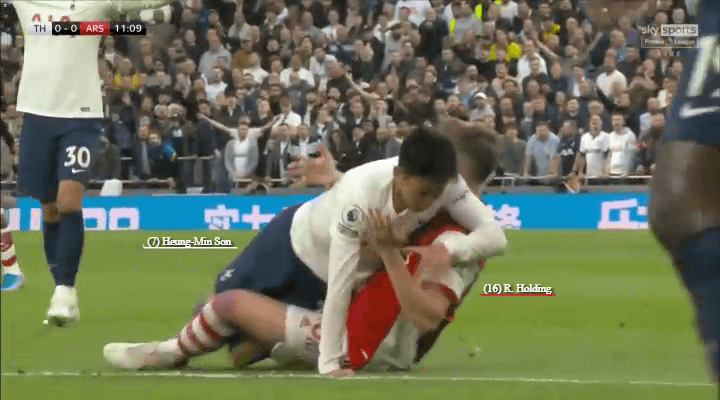 The tangle sees both men go to ground. Son catches Holding with an elbow, and like Holding with his knee earlier on, he is perhaps fortunate that the incident avoids further scrutiny. Holding then wrestles Son to the ground. Neither player is punished, but this battle is bubbling over and the referee will surely not allow it to go on like this indefinitely. 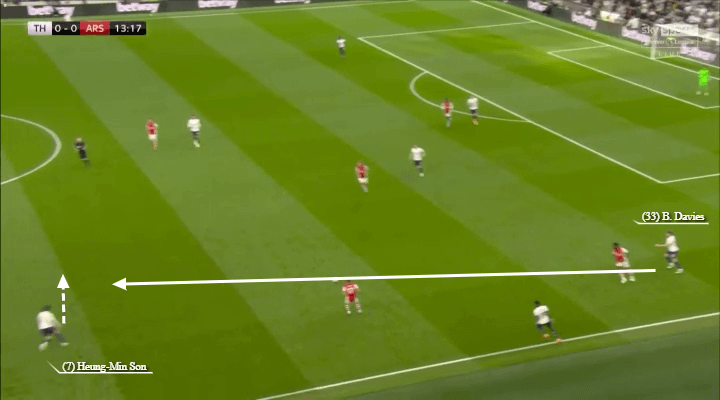 Two minutes later Son makes his signature dart infield again, and Davies finds him with another pass out from the back. 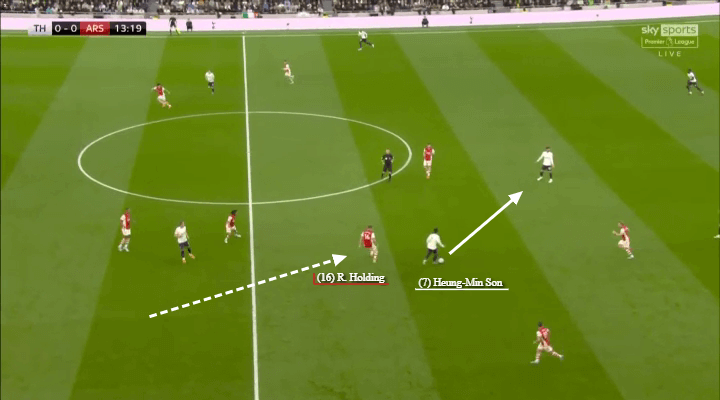 Holding comes out yet again to get close to Son. But, perhaps wary of their recent tangle, decides against a physical challenge. And rather than take him on, this time Son just rolls the ball back to Rodrigo Bentancur in midfield. It almost feels like a truce of sorts between the two players. 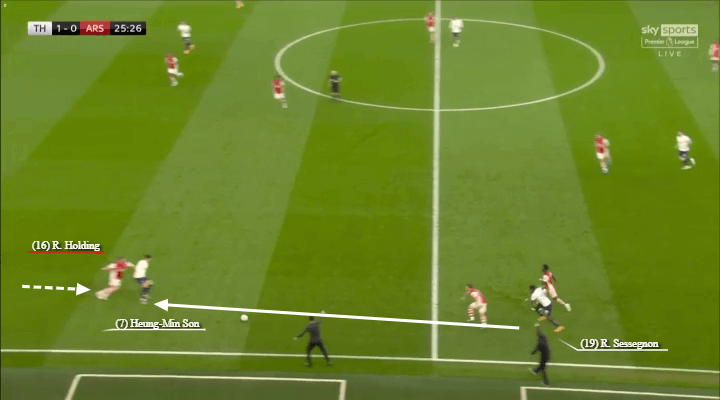 By the next time the two players meet, Spurs are already 1-0 up after Kane converted a penalty that Son won from Cedric Soares. This time it is Sessegnon rather than Davies who finds Son wide on the left, this time inside the Arsenal half. Holding, trying to get Arsenal back into the game, runs forward and engages Son. 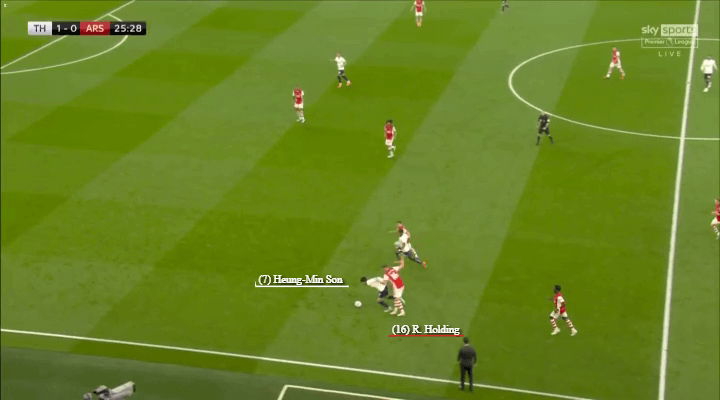 Son tries to wriggle away from Holding but he is brought down. And Holding, after repeatedly tangling with Son, is this time booked by referee Paul Tierney. Son has a decisive upper hand in the situation now. 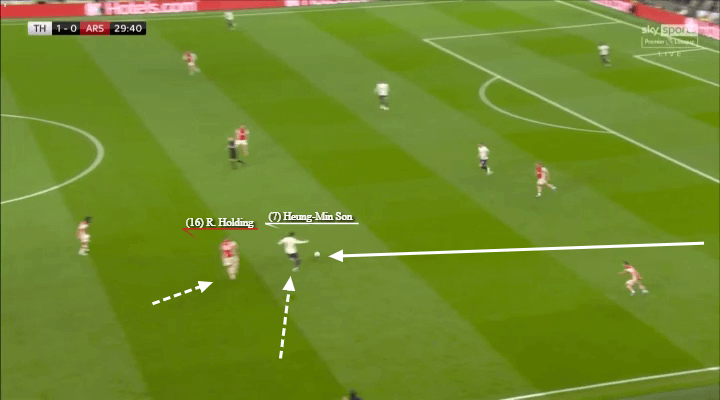 Still, Arsenal want to play an aggressive game. It is still 11-v-11 and it is only 1-0. So when Son comes deep to take another pass from Davies, Holding still pushes all the way up, deep into the Spurs half, to challenge him. This time he won the ball. The move came to nothing but clearly Holding, on a yellow card, is in a mood to take risks. 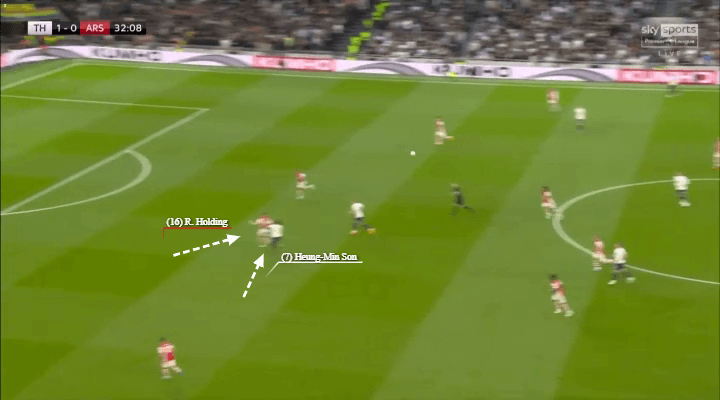 The decisive moment in the game came three minutes after that.

Rather than Davies or Sessegnon playing a low pass into Son’s feet, this came from Eric Dier hitting a long ball over Son’s head. Son makes his classic out-to-in run but he does not look like a favourite to win the ball. But Holding, looking far too keen to physically impose himself on his opponent, clatters into Son leading with his upper arm.

It is a bad foul but also a seemingly pointless one. And dreadfully costly for Arsenal. 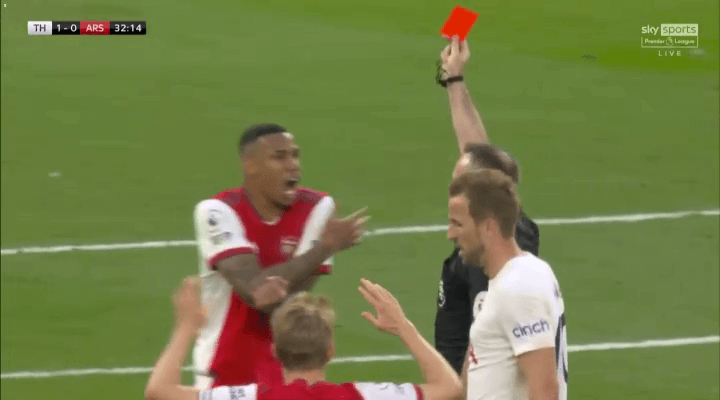 Tierney shows Holding a second yellow card and then a red. He is off and Arsenal are down to 10 men. Five minutes later Spurs have their second goal, from a corner, and the game is pretty much over.

Son’s intelligent movement had clearly been too much for Holding. He wanted to be aggressive but could not get the balance right. On another day he might have been punished by the referee even earlier than he was.