When the concept for “The Woman King” was but a glimmer in Maria Bello’s eye (yes, that Maria Bello, the film is the long-time actress’ first writing credit), “Black Panther” had not yet become a global smash, Gina Prince-Bythewood had not yet shown her action movie chops with the Netflix hit “The Old Guard,” and Viola Davis had only been nominated for two Oscars. In short: it was a very different time. The journey from then (2015) to now has only taken (ha, only) seven years, but Hollywood has changed immeasurably in the interim.

And while celebrating the creation of something like Prince-Bythewood’s “The Woman King” — a crowd-pleasing action epic that just so happens to center a group of African female warriors — is necessary, it also can’t help but come with a button: in 2022, this should not be the exception. Hollywood should have been making films like “The Woman King” for many years. It should not have been a hard sell in 2015. It should not be a remarkable event in 2022. And, yet, it is.

“The Woman King,” while based on a lesser-known segment of West African history during a decidedly fraught time in history, makes for a hell of a time at the movies, a seemingly “niche” topic with great appeal, the sort of battle-heavy feature that will likely engender plenty of hoots and hollers. And if it seems a bit Hollywood-ized, complete with glossy twists and a touch of the soap operatic to boot, perhaps that’s part of what makes it so special. You’ve never seen a movie about this that looks, well, so funnily familiar. If that’s what it took to get made, so be it. In this climate, in this world, stories like this are too precious and special to stay hidden. Bring them into the light.

Kicking off in 1823 and with a “Star Wars”-esque crawl to set the scene — see! Hollywood epic! for everyone! — Prince-Bythewood’s “The Woman King” instantly brings us into the world of the vibrant and thriving kingdom of Dahomey, the only place on the African continent that employs a full coterie of female warriors, the Agojie. But Dahomey is under constant threat, with enemies both domestic (including a variety of other local tribes) and foreign (white men and their insidious slave trade). Its young King Ghezo (John Boyega) is still unsure of how to rule — the large assortment of lieutenants and capos and even wives who he likes to gather on a regular basis don’t speak so much to a love of different opinions, but a worry over forming his own — but his most skilled general Nanisca (Davis) has plenty of ideas about what’s right for her, for her troops, for Dahomey. 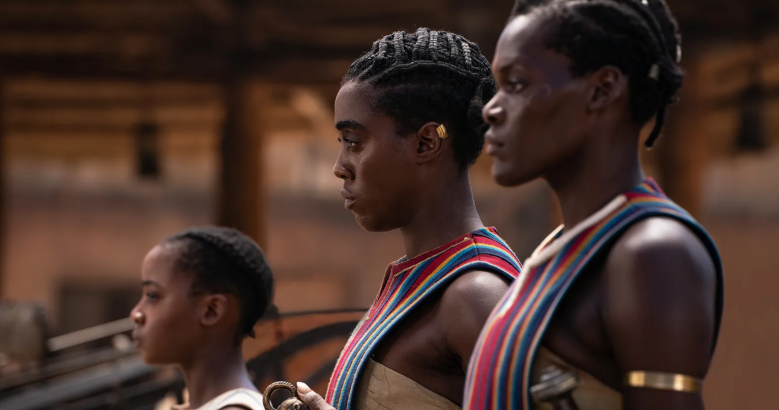 Nanisca is a fierce warrior and an impressive leader, but she’s grown tired of violence, or at least of the things that make it feel necessary, like slavery. (Davis is, of course, perfect casting for a role that requires both gravitas and deep empathy.) More than anything, she wants King Ghezo to see the possibility of a Dahomey that does not need to engage in the slave trade — yes, they sell to the white men; no, “The Woman King” does not turn away from this part of history — to be prosperous. That it does not need to sell any Black body to get ahead.

But Nanisca’s high ideals are coming to the fore at a terrible time. The other tribes are moving in close. The Agojie are training a fresh batch of newbies (including the young brawler Nawi, played by the wonderful Thuso Mbedu). War is on the horizon. Slavery is inching closer. What can the Agojie do? Turns out, just about everything, thanks to meticulous training (much of it led by Lashana Lynch as the wonderful Izogie), a strong sense of self, and a little bit of ingenuity.

No wonder the Agojie are treated with a profound reverence that also serves to keep them sequestered from the very people they are protecting — commoners can’t even look at them when they return from battle, they live in a special area of the palace where no one else can tread — but Prince-Bythewood and her cast strive to make these women feel like fully realized people, not simply super-soldiers with a panache for machete-wielding. (Ditto for the kingdom of Dahomey, shot on location in Africa, which benefits immensely from rich production design from Akin McKenzie, delightful costumes from Gersha Phillips, and functional and fun hairstyles from Louisa V. Anthony’s department.)

Which is why the choice to not include more backstory as to how and why the Agojie became such a part of the very fabric of royal Dahomey life grates in an otherwise rich tale. Dana Stevens’ script (she and Bello are both credited with the film’s story) turns away from historical deep dives into both a soap opera-level contrivance that links Nanisca and Nwai beyond their warrior family, and a flat attempt at a love story that feels like the product of truly misguided studio notes (“what if this film about chaste virgin female warriors included a heterosexual romance, and then also the Fabio-esque male love interest used it as an opportunity to learn about the horrors of slavery?”). But if these details are what it takes to bring this film to the big screen, from a major studio and with a full theatrical rollout to boot, perhaps it was worth it. The Hollywood treatment should extend to any stories with this much inherent value and appeal.

And still, the film is bursting with remarkable elements: a vivid and fully realized setting, eye-popping battle sequences (pushing that PG-13 rating to wild ends), richly drawn characters, and wonderful performances from everyone. Good luck picking a standout performance, because while both Davis and Mbedu are the obvious draws, Lynch and Sheila Atim also turn in star-making supporting work, while Boyega makes off with a complicated portrayal of the young king, and Jayme Lawson steals the show every time she appears on screen as one of Ghezo’s more ambitious wives.

If this is what a Hollywood-ized and -sized blockbuster looks like in 2022, bring it on. Bring them all on. They’re worth the fight.

“The Woman King” premiered at the 2022 Toronto International Film Festival. Sony releases it in theaters on Friday, September 16.