“It is not about saying words, it is about doing the things.”

That is what Thiago said in his first interview after joining Liverpool from Bayern Munich in September 2020.

“The things” may well refer to winning trophies but it felt like Thiago’s way of describing his skill set. Last weekend in the Community Shield win over Manchester City, he was string-puller in chief and reminded us of how gifted he is and what those skills are.

In the first 21 minutes of the game, he attempted the same pass three times. Given his obsession with searching for the unpredictable, it felt unusual. But with City leaving plenty of space for Mohamed Salah and Trent Alexander-Arnold on the right wing, it was the perfect place for Thiago to chip into.

His first go was a fired cross-field pass into Alexander-Arnold, who was sprinting into the unoccupied zone on City’s left. 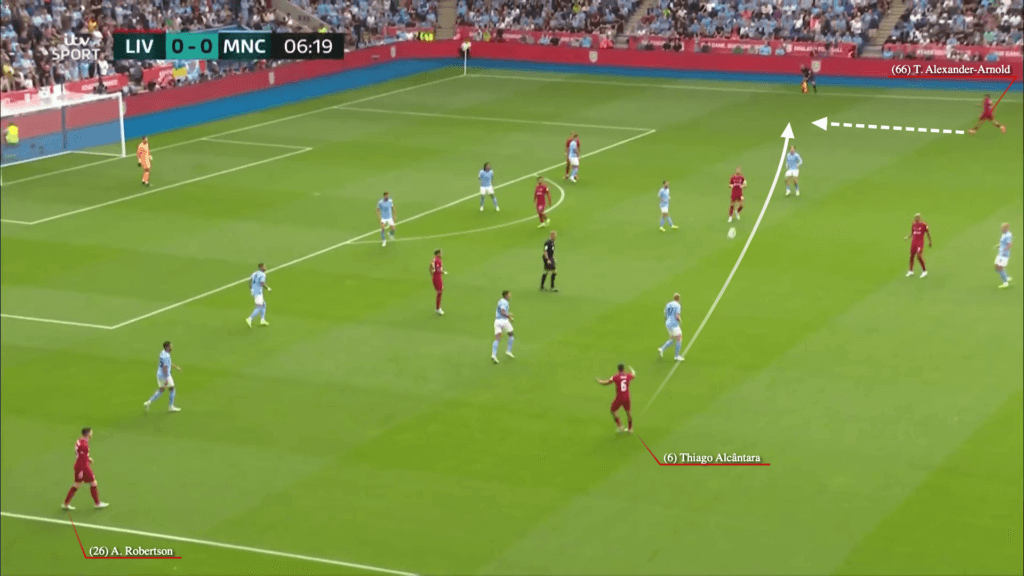 Thiago knew where he wanted it to go and as soon as he hit the ball, he knew it wasn’t going where planned. With the ball still in mid-air, he put his hand up to apologise as Alexander-Arnold began to back peddle to collect it. 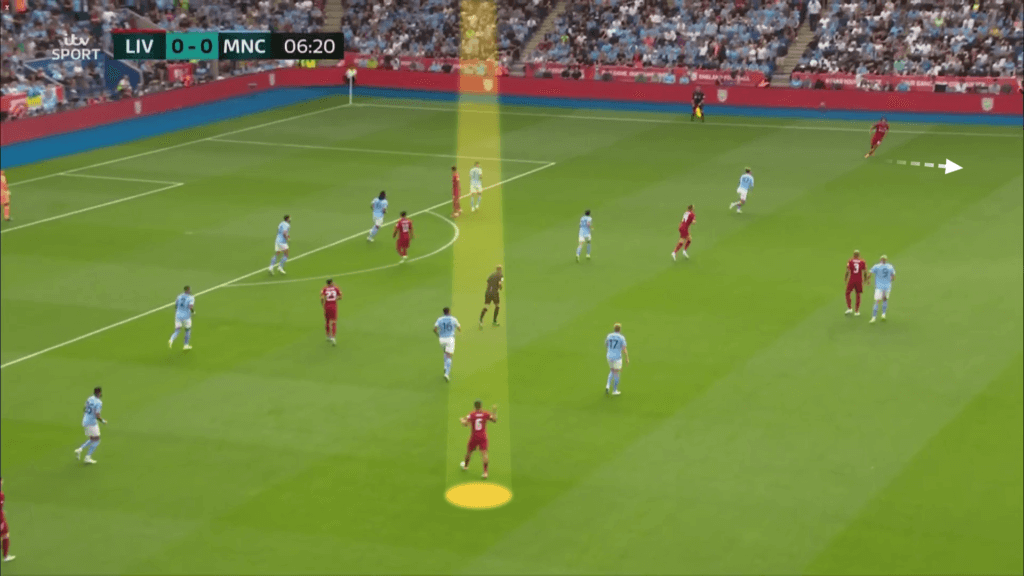 He then raised his hand again this time to the other full-back, Andrew Robertson, who had been calling for a pass himself. 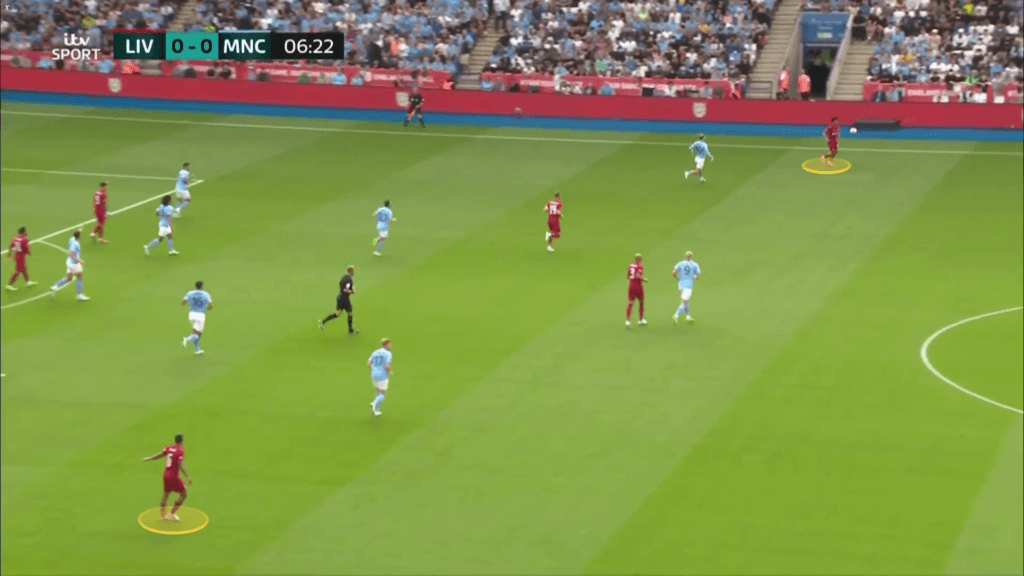 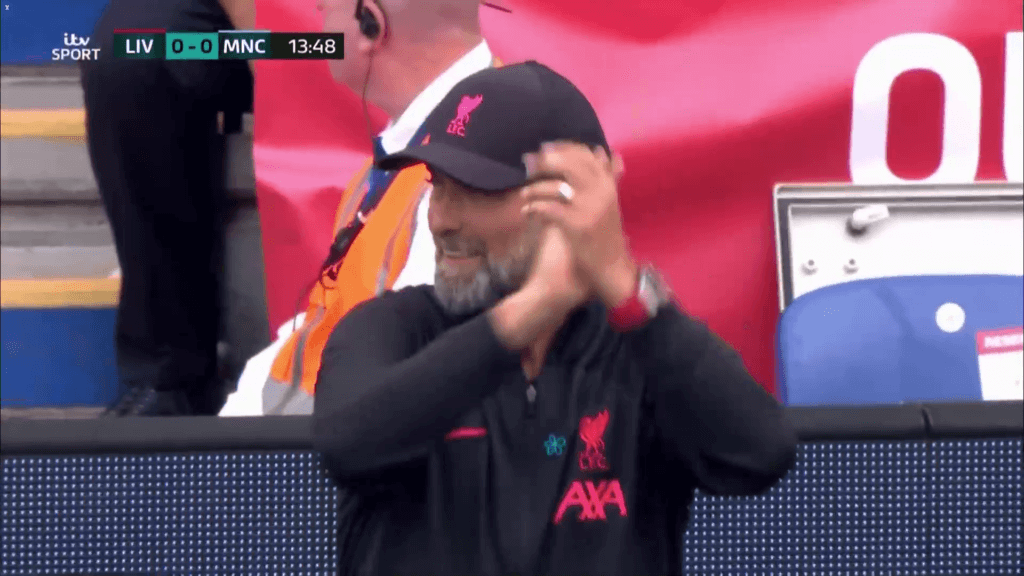 After hitting another stunning lobbed pass to Salah, Thiago charged into the box. 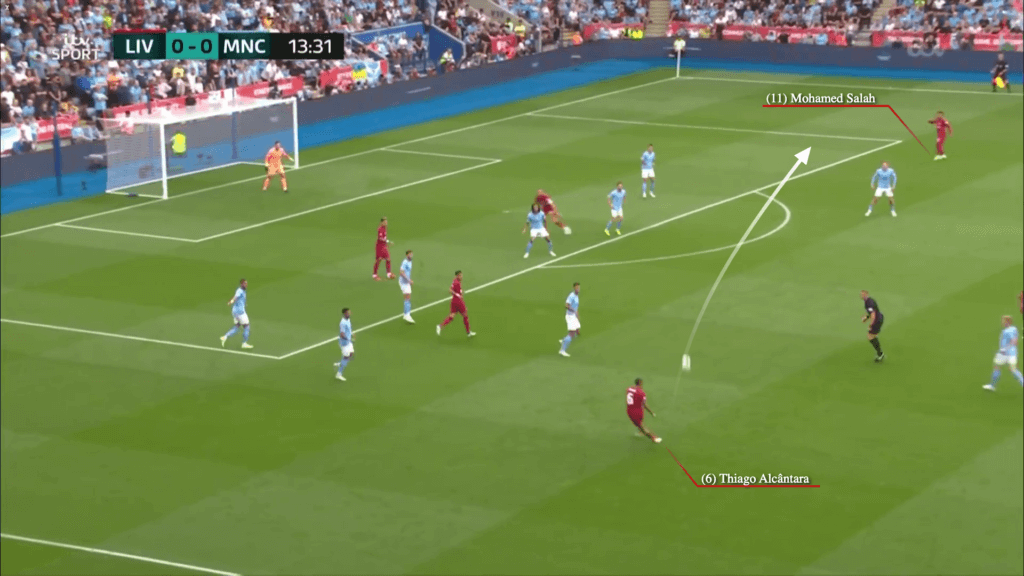 As he was on the move, Salah passed to Alexander-Arnold and the right-back curled a cross into the back post… 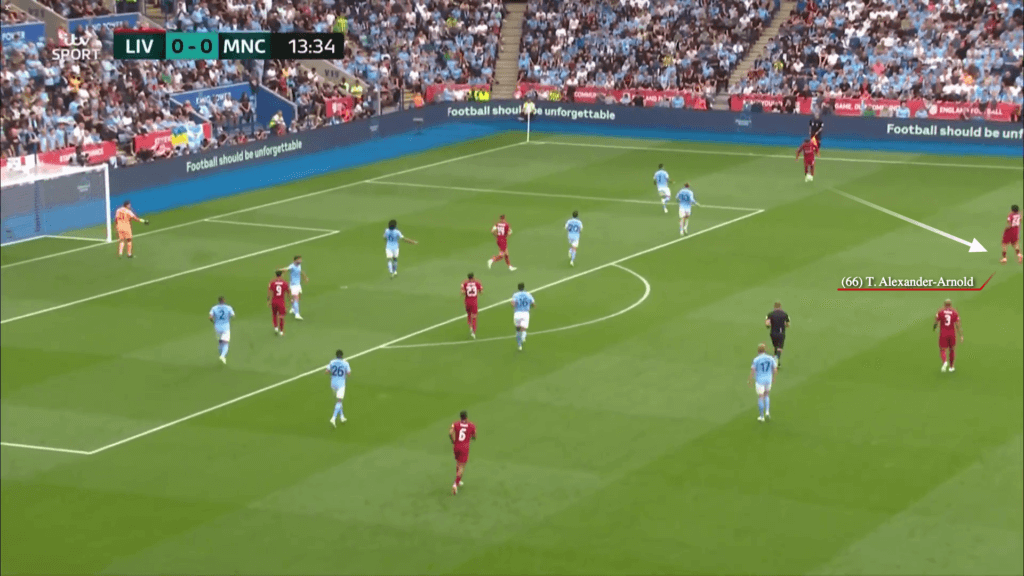 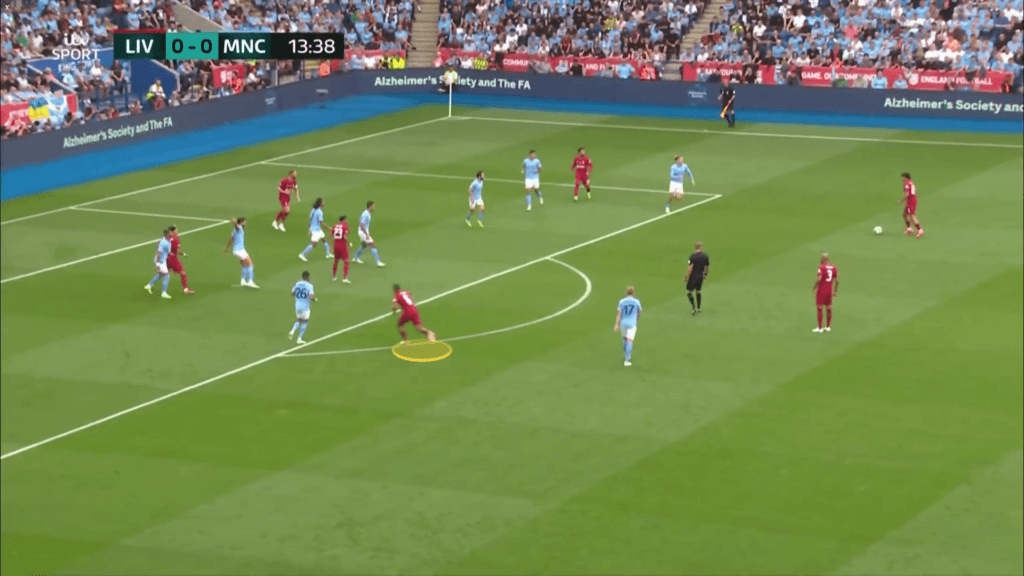 …but it was Robertson whose header hit the post as the Spain international was finding space between Kyle Walker and Ruben Dias. 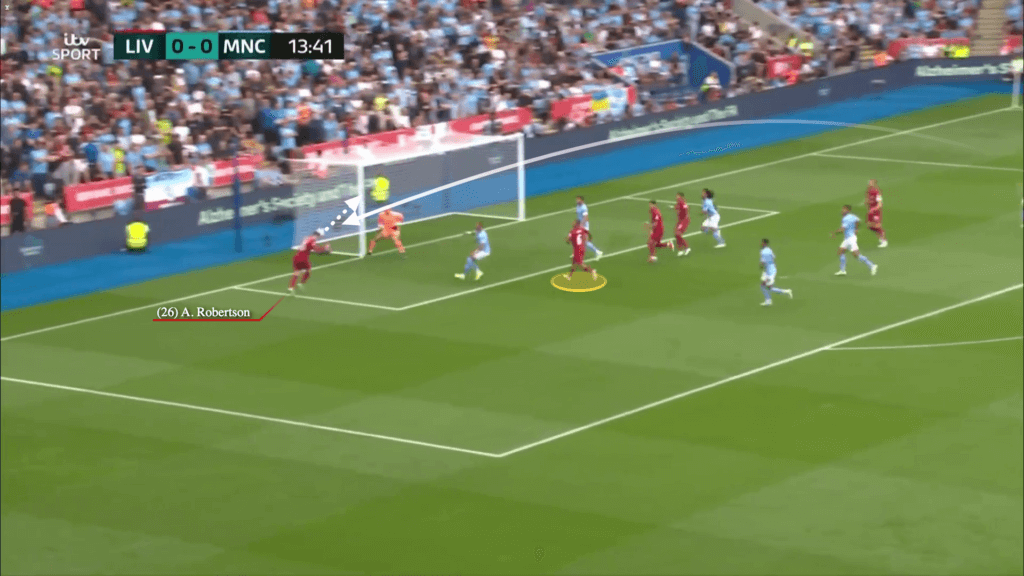 For pass three, Thiago, a bit closer to the box this time, played a similar ball over to Salah. 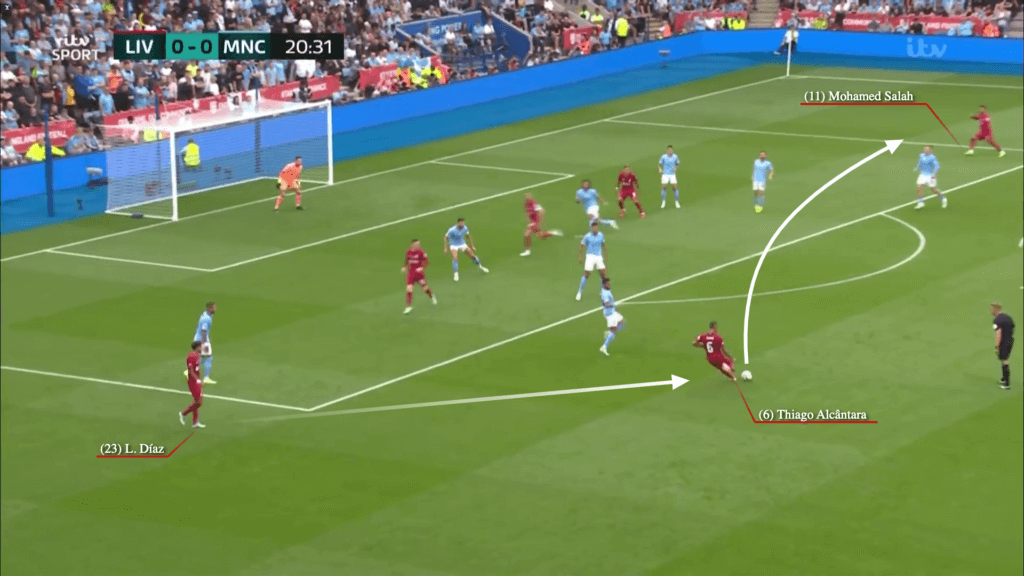 The Egypt forward took control of it before laying it off to Alexander-Arnold who rifled his shot beyond Ederson. 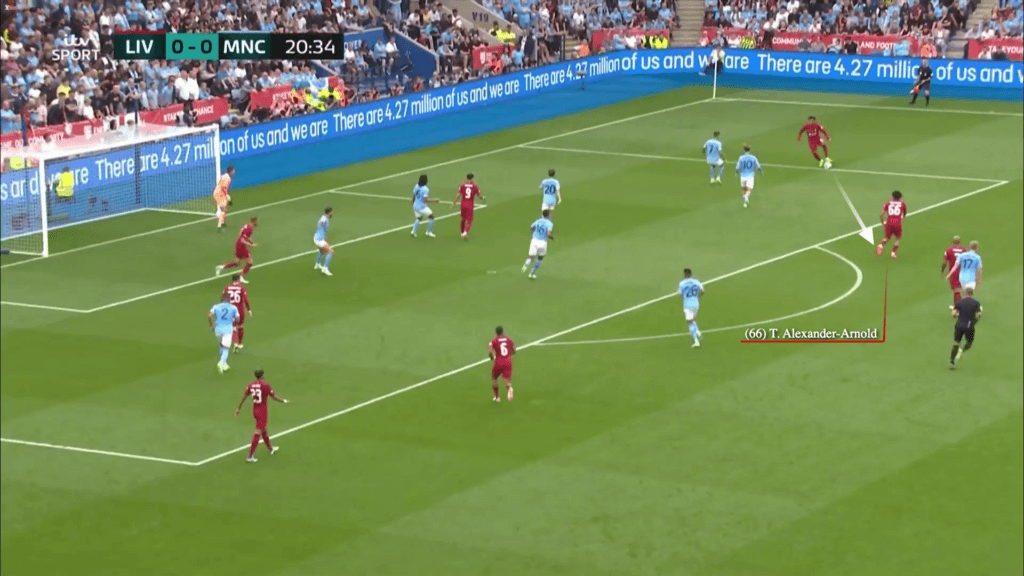 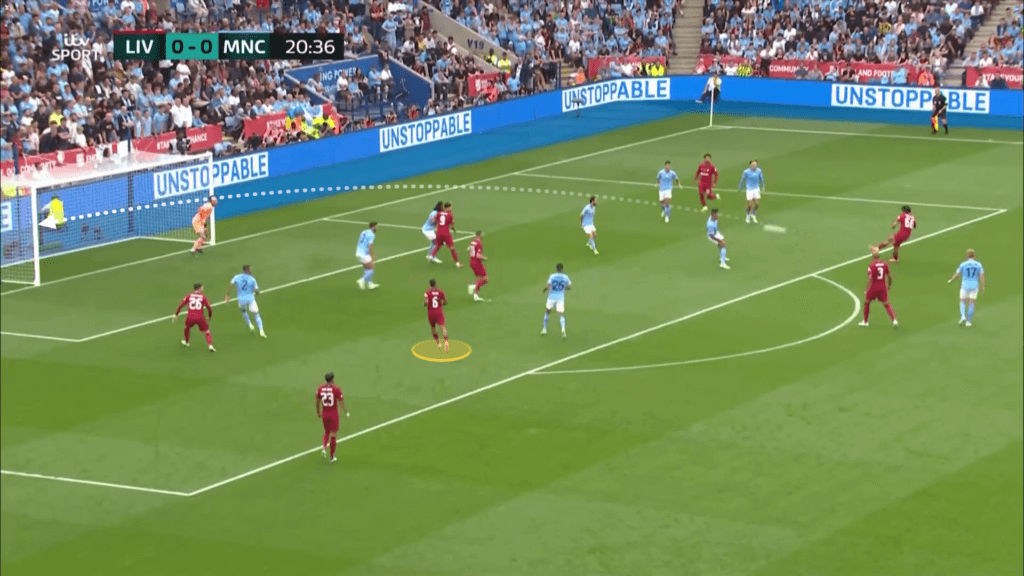 It was nice timing from the advertising hoarding as Thiago pulled the strings from midfield. He often leaves spectators audibly gasping at his audacity and technique and he did so in the 32nd minute when he weaved in and out of danger.

When Adrian played a pass to Virgil van Dijk, Thiago was glancing around mapping out the space and structures. 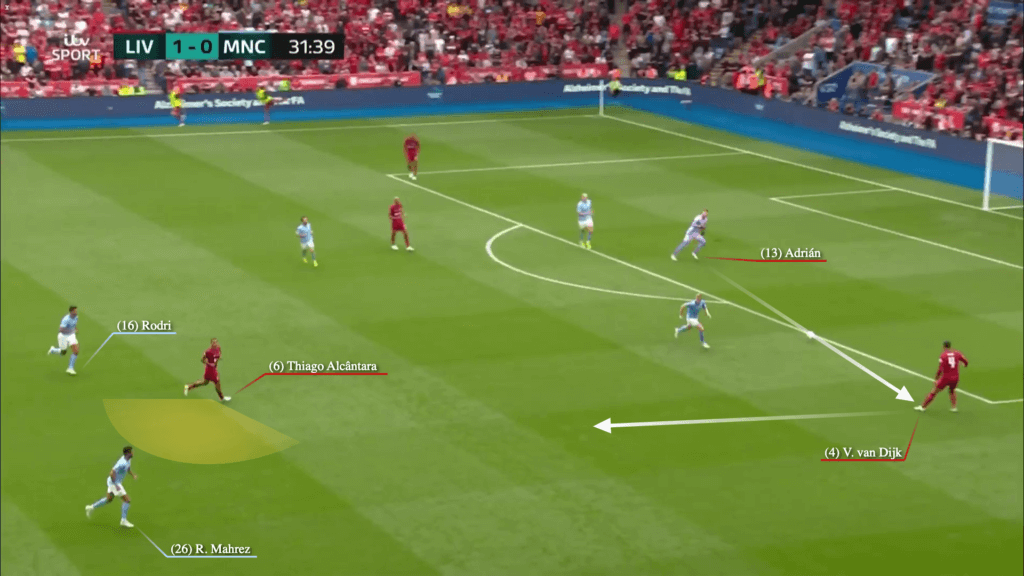 His reading of the game meant he knew the pass was coming to him before it even got to Van Dijk.

When it did arrive, Rodri pressed him only for Thiago to hold him off while having several touches.

There was one point when Thiago was down on the ground and it looked like Rodri was going to steal in but somehow the No 6 and his dancing hips prevailed. 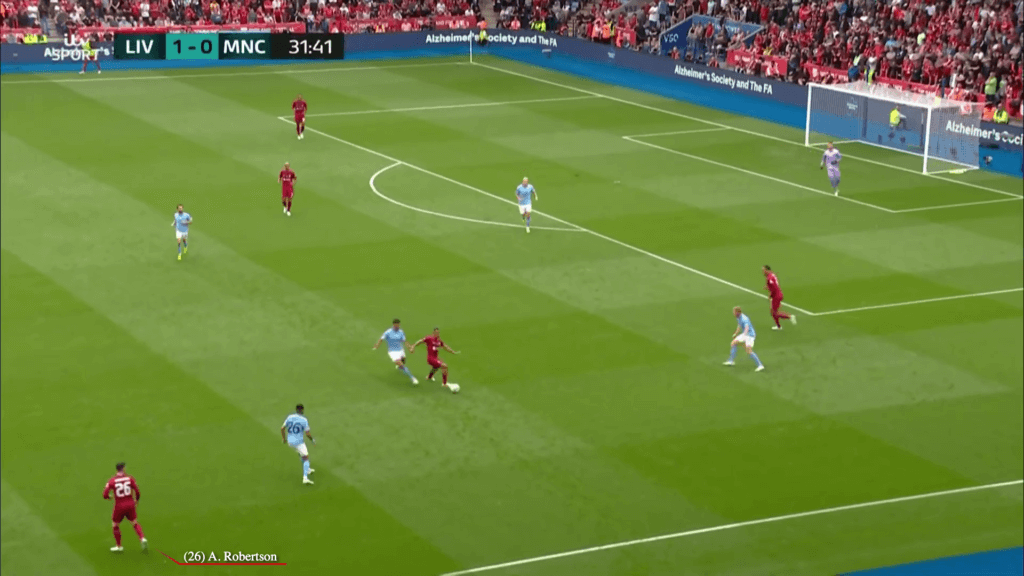 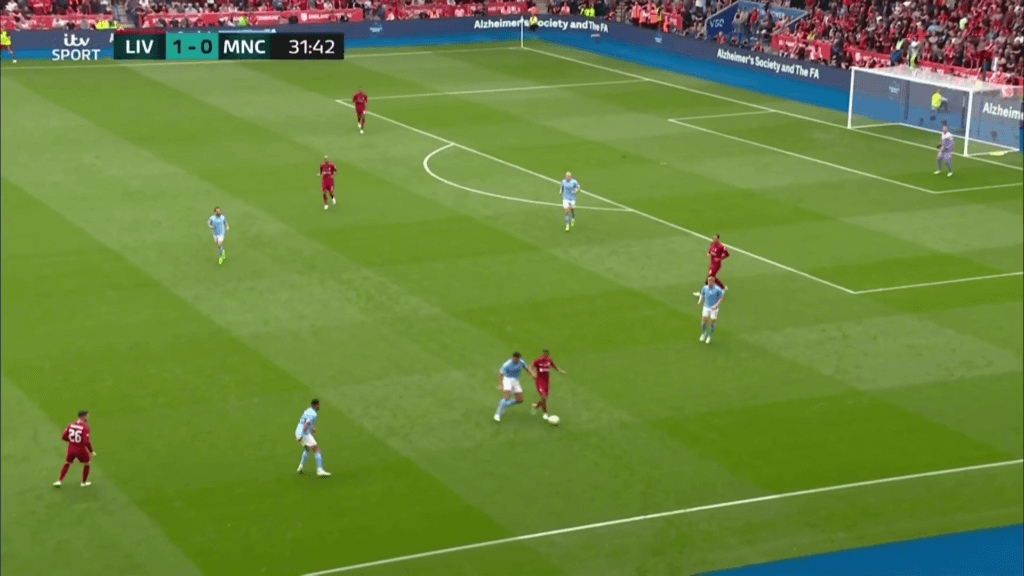 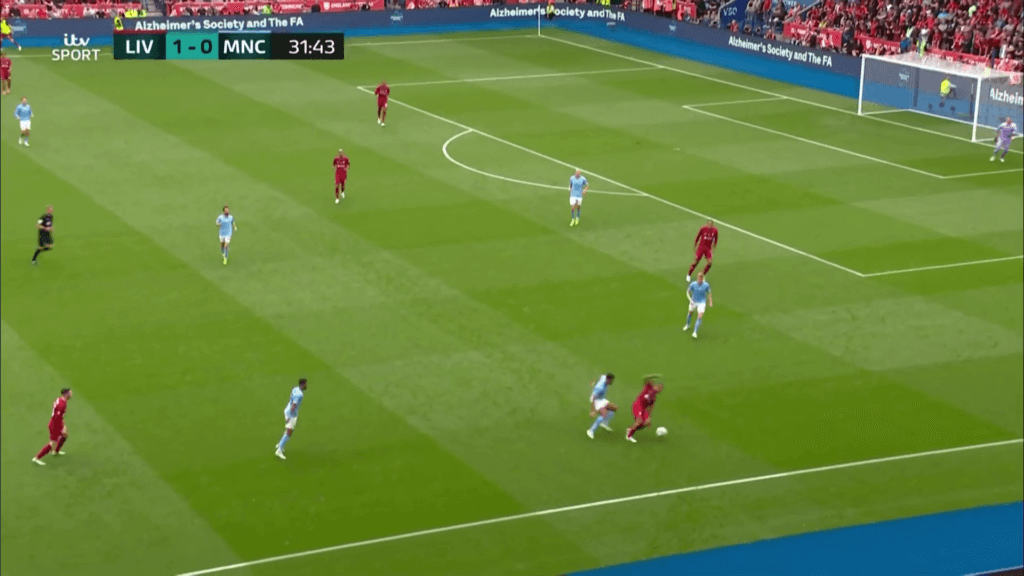 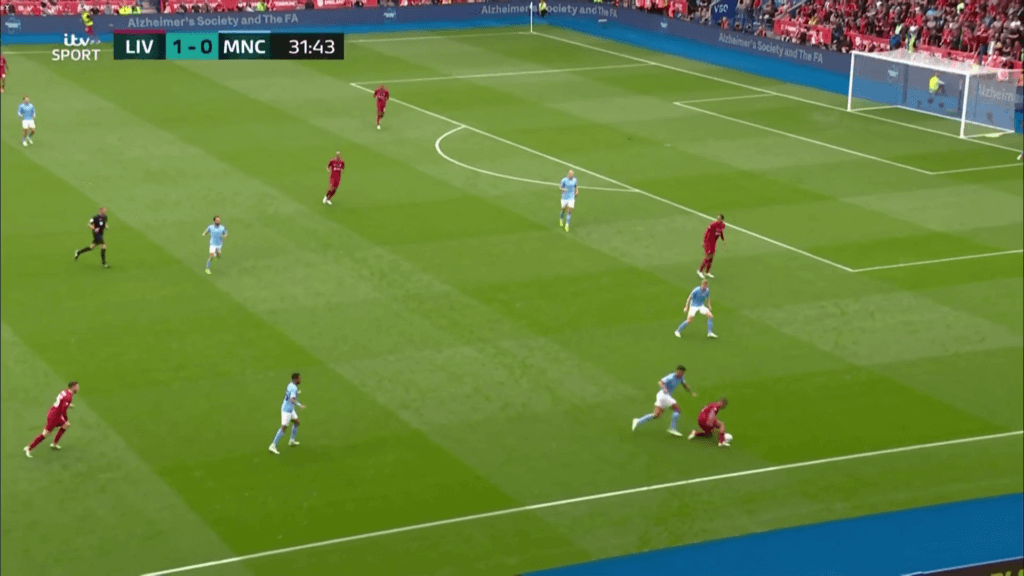 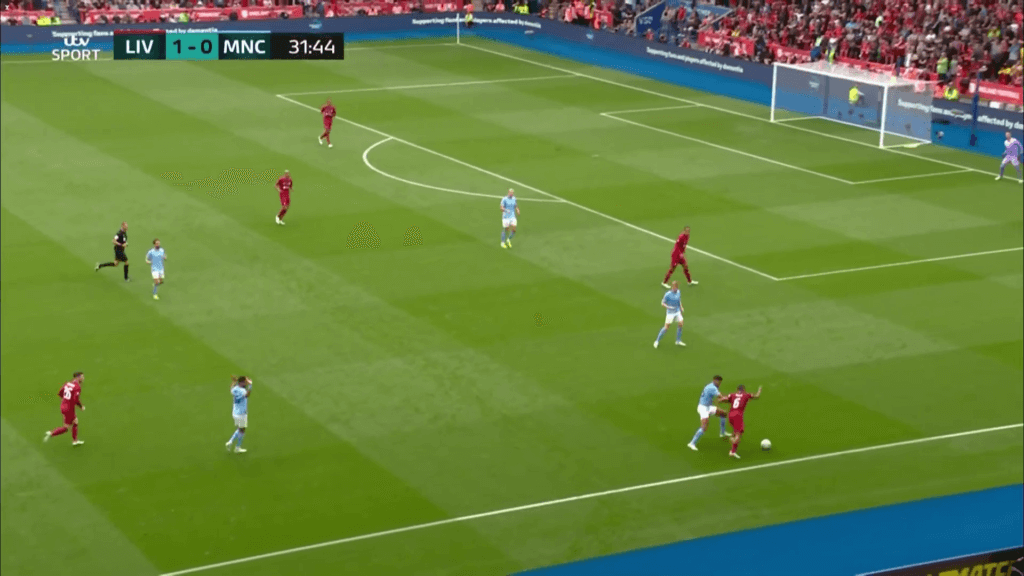 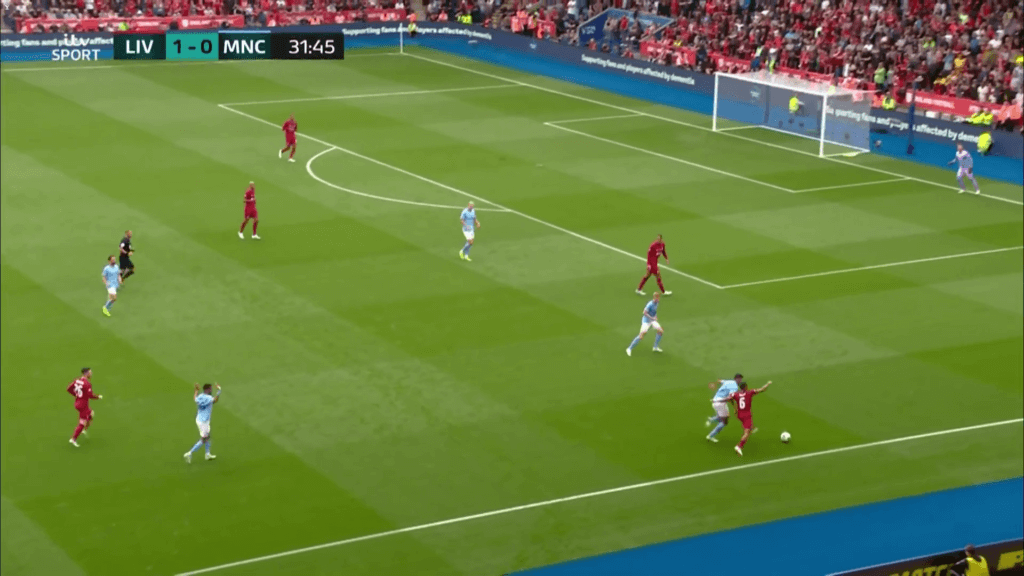 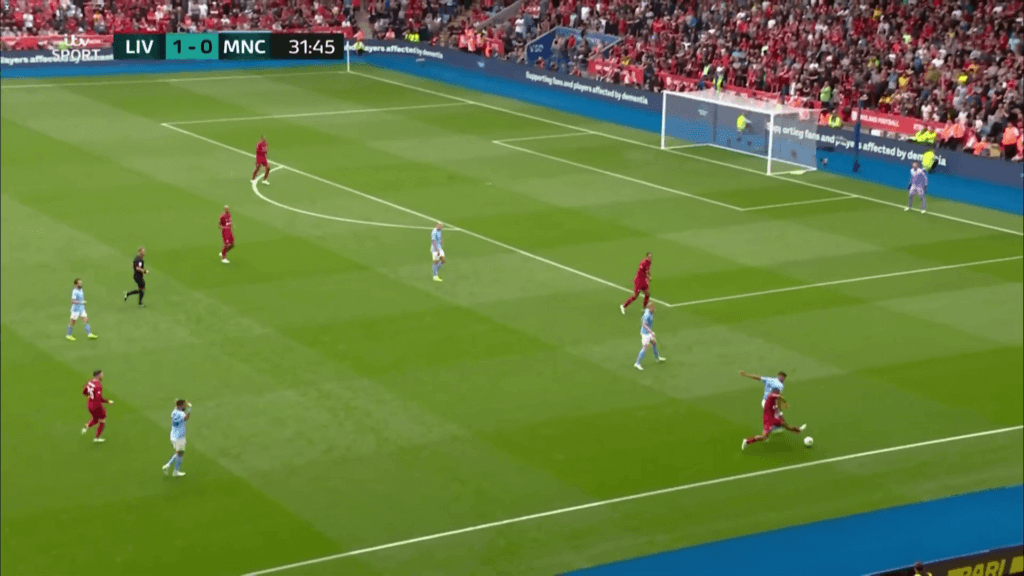 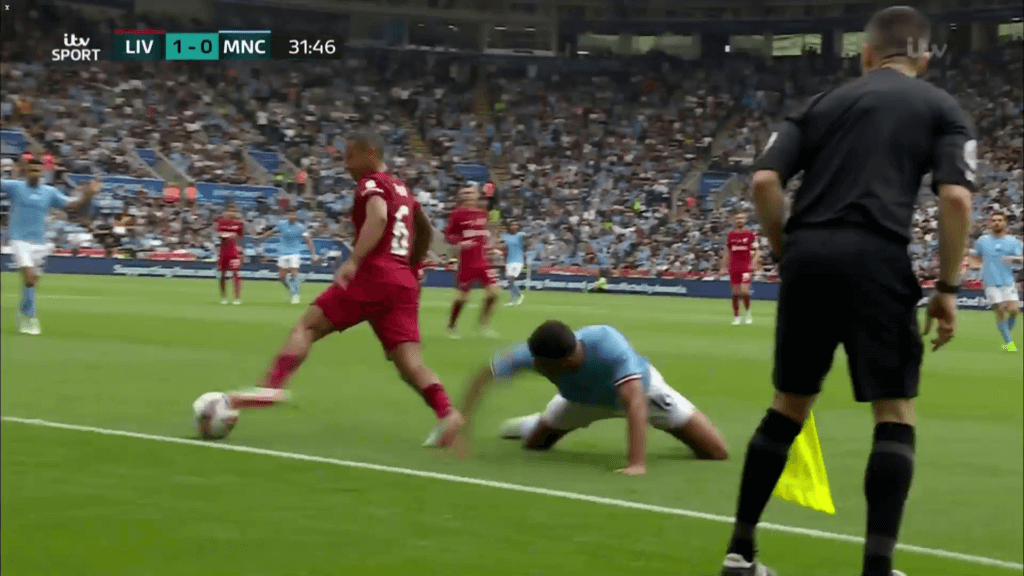 When Thiago skipped free, Kevin De Bruyne plundered in — and this is where the magic, and the gasping, really happened. 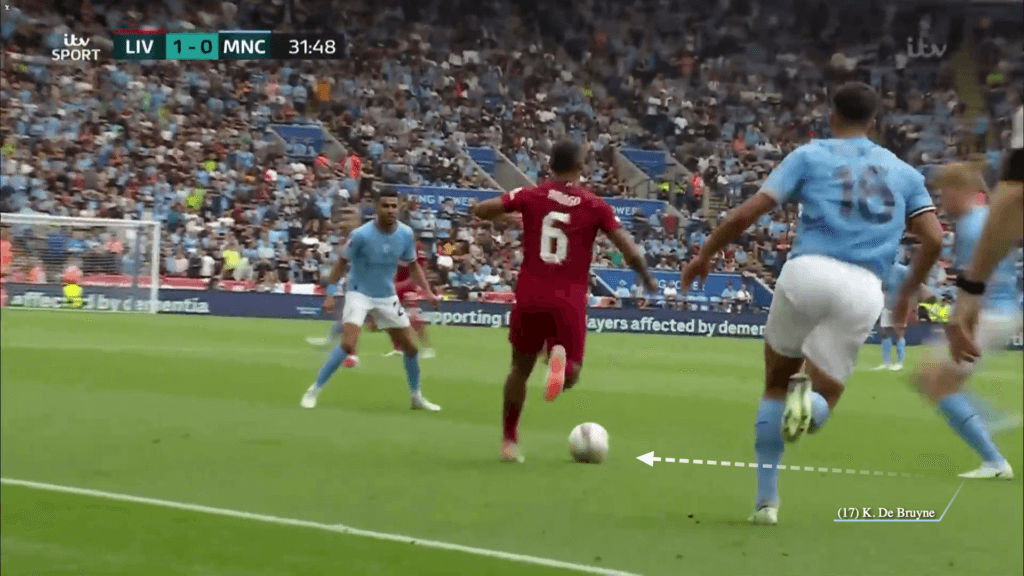 When De Bruyne stomped across to make a tackle, Thiago, at the last possible millisecond, caressed his right foot around the ball to boomerang it back toward him. 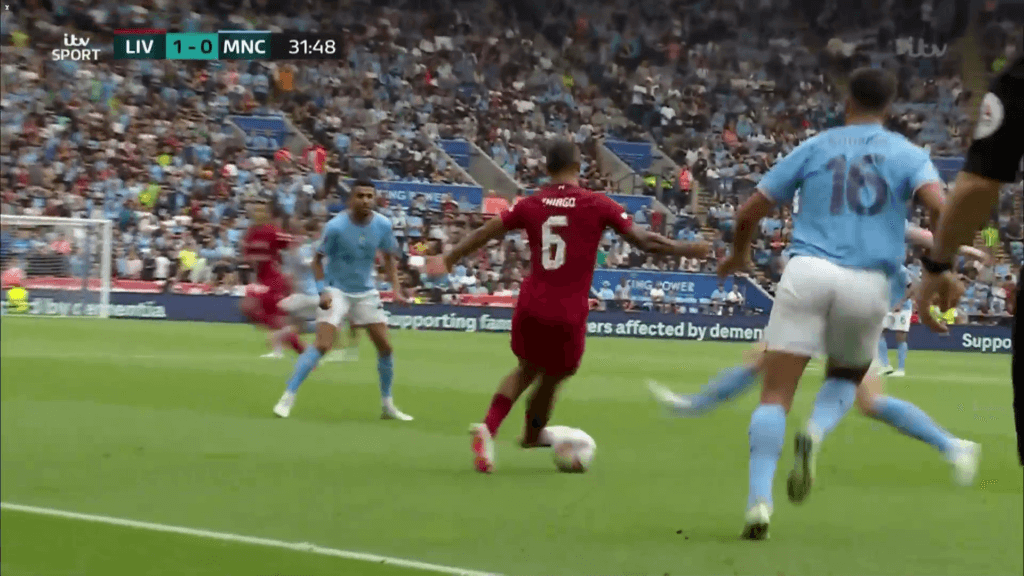 Rodri, who had returned to his feet, looked even more eager to put a stop to Thiago’s menacing. However, even with Erling Haaland lurking behind him, Thiago had other ideas and just as Rodri piled in, he contorted his body and the ball to sneak a pass back to Van Dijk. 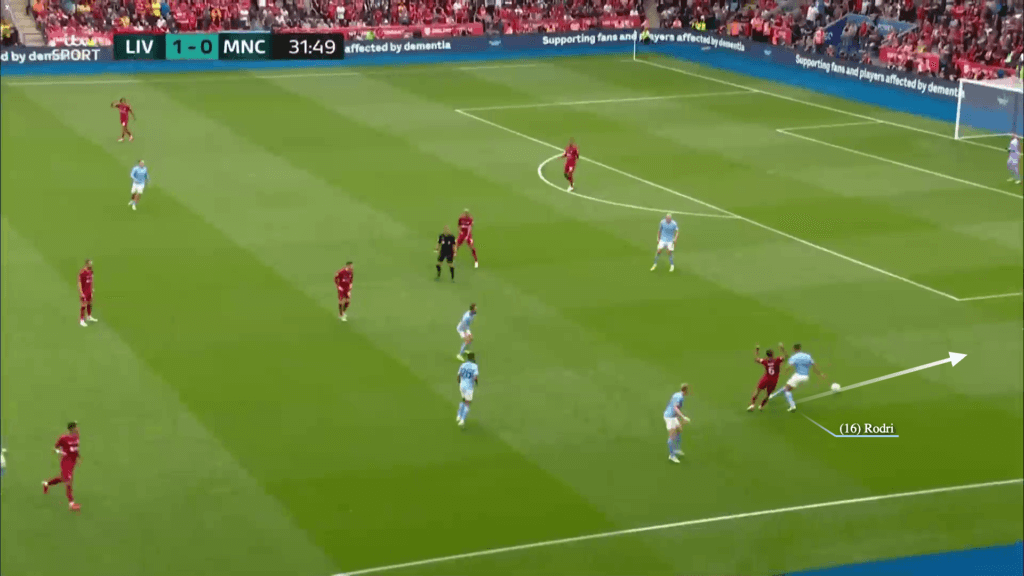 After Van Dijk returned the ball to Adrian, he turned to Thiago to applaud. The centre-back knew Thiago had just shown up two of the world’s best midfielders.

As Van Dijk looked over at him, Thiago, like the radar system he is, was re-mapping out the pitch. 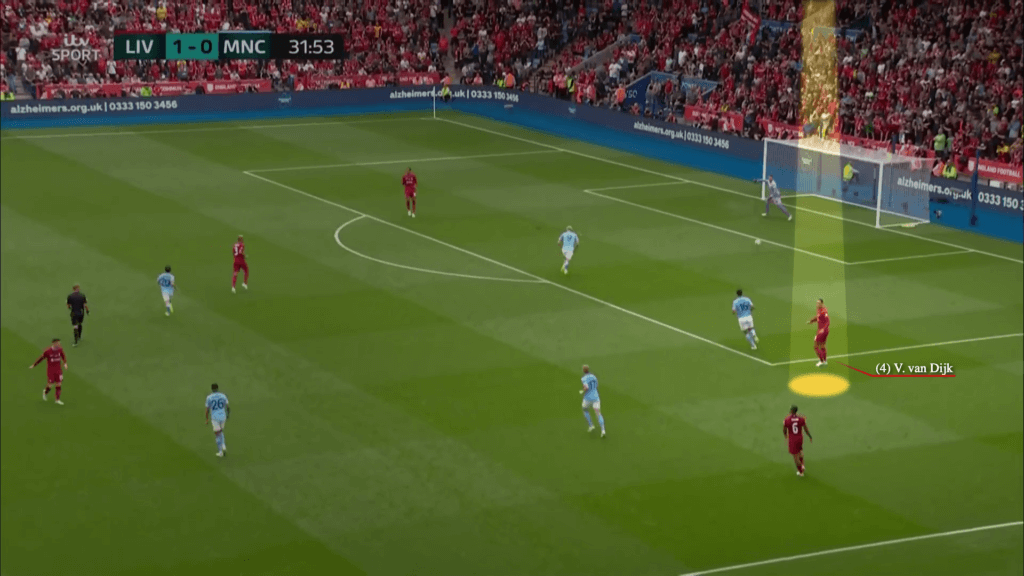 These are the things Thiago was talking about on his first day and they happen in every game he plays. The problem is Thiago is not always available for every single game.

When you look at his injury record and the number of matches he has missed over his career, it is clear he will be absent at times.

Liverpool played 63 games after reaching the finals of the Carabao Cup, FA Cup and Champions League, with Thiago featuring 39 times. Even though he does miss games, he made the third-most appearances in midfield behind Henderson and Fabinho.

During the warm-up for the Carabao Cup final win over Chelsea in February, Thiago left the pitch in tears after feeling a tight hamstring that ruled him out.

History almost repeated itself at the Champions League final in Paris.

Thiago, who had been recovering from an Achilles injury, looked set to start against Real Madrid. That was until during the warm-up he felt a twinge and returned to the dressing room for treatment. It looked as though Naby Keita would take his place in the starting XI.

Due to the chaotic scenes outside the ground, by the time the game eventually started at 9.36pm, Thiago had been deemed fit enough to start.

This has been an unwanted occurrence throughout his career. From the past eight seasons, he has hit the 30-game mark in the league just once. 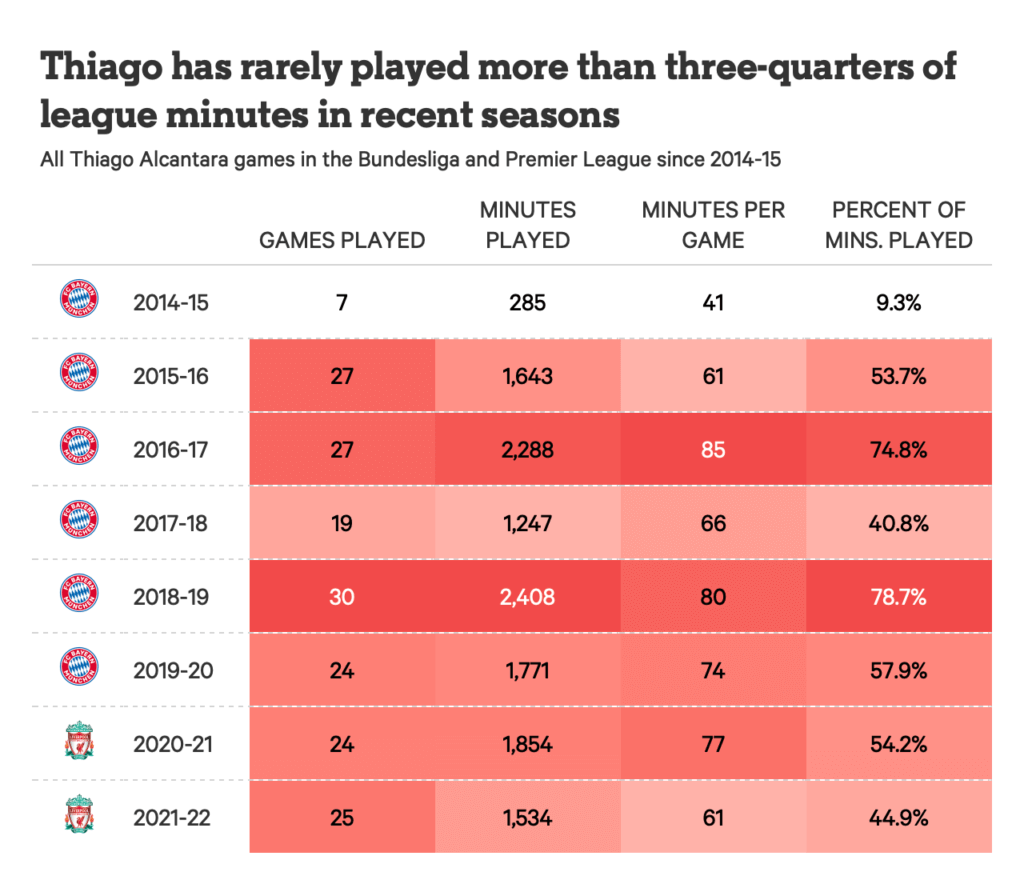 It is more about getting the best out of him when he does play, especially with Liverpool’s midfield options dwindling in recent weeks. Alex Oxlade-Chamberlain has been ruled out for up to three months with a serious hamstring complaint, Curtis Jones failed to feature in the friendly against Strasbourg on Sunday after picking up a knock while Keita missed the game through illness.

Liverpool have Jordan Henderson, Fabinho, James Milner, Fabio Carvalho and Harvey Elliott available, but it is still key Thiago can stay fit to add his uniqueness to the midfield.

When Liverpool signed Thiago at 29, it was a move away from their usual pursuit of players who were about to enter their peak years — he was in the midst of his.

Last season, that was seen in phases. “In the shape he’s in, he would play for each national team and would not only play for it, he would probably be the outstanding performer,” Klopp said before the Champions League semi-final with Villarreal.

“If he’s just in the right place physically then he would show everybody how good he is.”

Keeping Thiago in the right place physically will be fundamental to their fortunes over the next nine months.