CLEVELAND — The Detroit Tigers were cruising through the sky on the team plane when catcher Tucker Barnhart turned to speak to Tarik Skubal, the lone member of the team’s Opening Day rotation yet to suffer an injury this season.

“Dude, let’s get some bubble wrap,” Barnhart said. “We gotta get you away from everyone.”

That’s where the Tigers stand entering a three-game series against the Guardians: Injured, aching and ailing. As the team tries to dig itself out of an early season hole, things are getting worse before they get better.

Friday in Cleveland, Tigers manager A.J. Hinch became the latest symbol of the State of the Tigers. Hinch sat atop a dugout bench, face puffy, eyes drooping. He announced he would not manage Friday night’s game because of a non-COVID illness that has him feeling awful. Hinch arrived at Progressive Field and did some pregame preparation but eventually decided he was better off spending the night at the team hotel, leaving bench coach George Lombard to manage in his place.

“I feel useless, to be honest,” Hinch said. “Didn’t sleep a ton last night. The off day was spent in bed. I also don’t want to get anybody else sick.”

Already, the Tigers have been dealing with a bug going through the clubhouse. It left outfielder Austin Meadows ill and eventually led to an inner-ear infection, which eventually resulted in an odd case of vertigo that forced Meadows to the injured list.

Friday in a dimly-lit visiting clubhouse, several team members sat at their lockers wearing masks for the first time in a while. That’s because right-hander Will Vest — an ascendant member of the team’s bullpen in 2022 — did test positive for COVID and is on the IL as a result.

Before heading back to his hotel for the evening to recuperate, Hinch said the Tigers have done testing and hope to have contained any potential COVID outbreak.

But even if health and safety protocols prevail, this team is already battered for a host of other reasons.

Earlier in the week, starter Eduardo Rodriguez was calling to the dugout during an ugly first inning at Tropicana Field, clearly not feeling like himself. Rodriguez is not yet officially on the injured list, but he’s dealing with pain in his left side, and an IL stint remains likely. Hinch said an MRI didn’t reveal any clear diagnosis. Nothing obviously wrong with the oblique. Nothing amiss with the intercostal muscles.

In some ways, that is good. In other ways, it means Rodriguez’s injury could be harder to properly treat.

“The initial review is very positive, that it’s minimal signs of trauma or any issue.” Hinch said. “The nerve-wracking part of it is that there’s no sign of trauma.”

The Tigers were already in need of a starter this time through the rotation, and Matt Manning, who had been rehabbing from a right shoulder injury in Triple-A Toledo, was on track to get a start next week against the Twins. But Manning left his rehab outing Thursday after only two innings, and it was natural to fear the worst — perhaps recurring pain or an arm blown out altogether. Already, young pitcher Casey Mize has suffered a setback in his recovery timeline, remaining at the Tigers’ team Florida facilities dealing with a right elbow issue that has already cost him several starts.

Manning, fortunately, was only dealing with dehydration despite a short outing that included diminished velocity. But as far as injuries go, the list goes on: 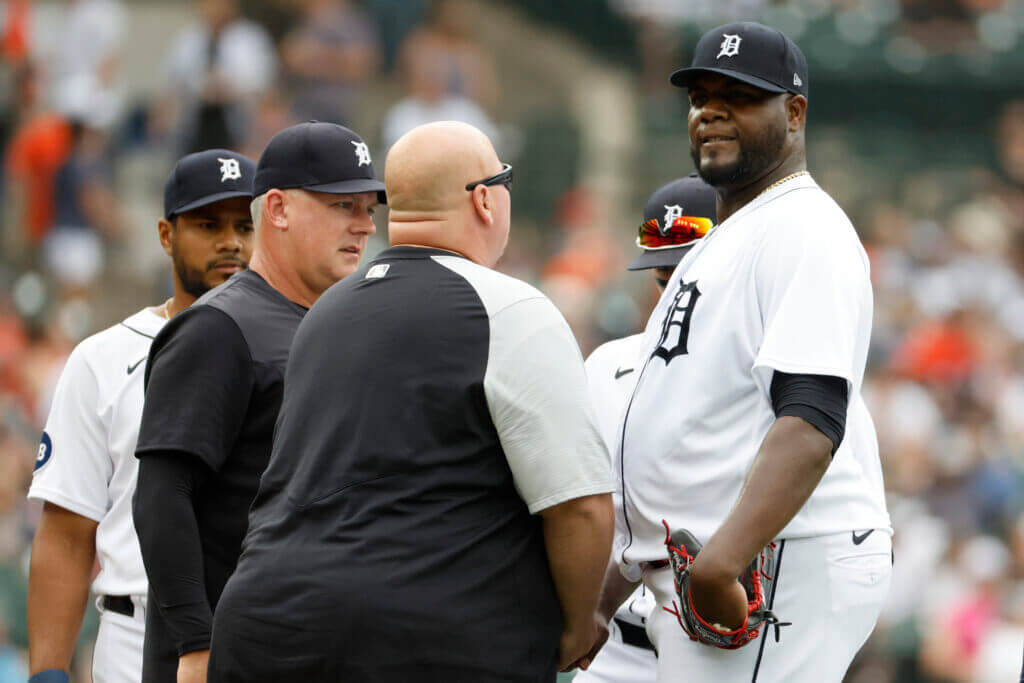 All this adds to the gloom that has come with a dismal 13-25 start to a season that began with high hopes.

“It sucks,” right-hander Michael Fulmer said. “No easy way to say it.”

Fulmer also added perspective. None of these injuries have been the type you simply rub some dirt on and play through. Fulmer pitched with knee pain in 2018 and arrived at the next year’s spring training wearing a bulky brace after an offseason surgery. His velocity was down, likely because of the knee, and as he reached back for more power from his upper half, he ended up tearing his UCL and missing the entire season.

“You want to save them for the longevity of their careers,” Fulmer said. “You’re thinking past this point. If it means a month or two (on the IL) now, it could save their careers at some point.”

The shortened spring training likely did not help the Tigers’ pitching health, but they’ve also had an incredible run of bad luck. There was Pineda, taking a hard comebacker right off the hand; there was Victor Reyes, pulling his right quad in his first game back from a left quad strain; there’s Meadows with the odd dizziness and nausea.

During the team’s Thursday off day, Barnhart was texting with Hinch when he learned the latest.

“I didn’t know if he was gonna be here today or not,” Barnhart said. “I knew yesterday he was feeling pretty shitty.”

That feeling, for one reason or another, seems to have hit almost everyone.

Samantha Jones: the former NHS nurse asked to bring order to No 10 | Politics

Glee in Russia and sadness in Ukraine as Boris Johnson quits

New Lakers signings: What we learned at their free-agency introductions

Who will replace Boris Johnson? The runners and riders | Conservative leadership