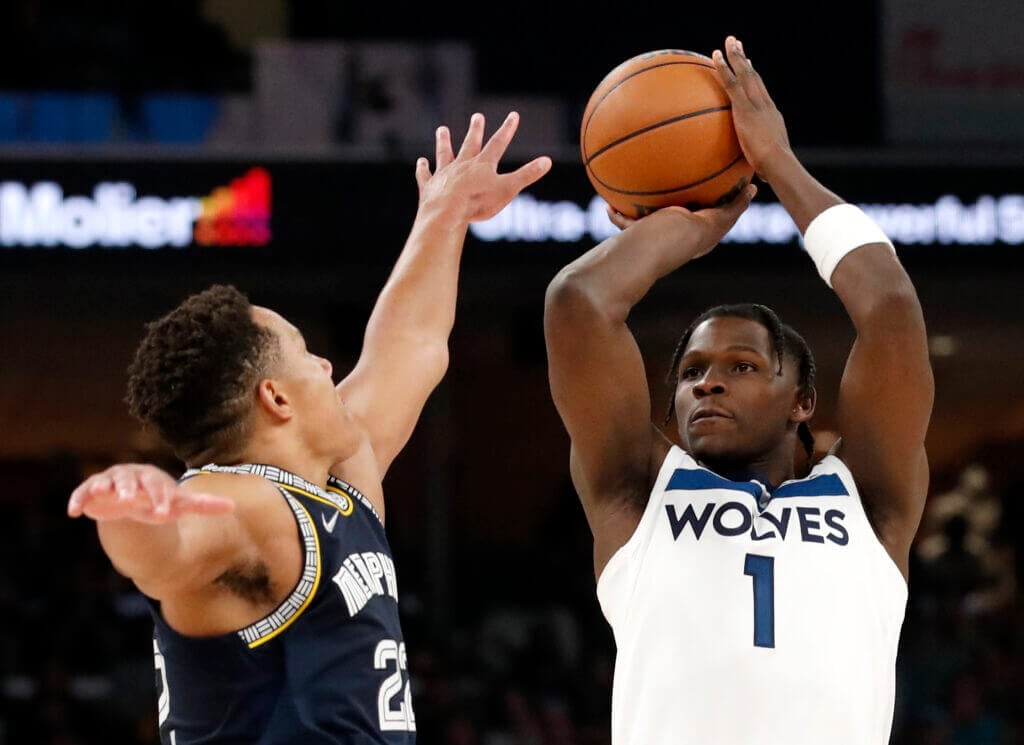 When a team makes a roster change as significant as the one the Timberwolves pulled off this summer, it can often take some time for the new players to figure one another out on the court and build the kind of chemistry it takes to be a factor in the Western Conference. The league released its schedule on Wednesday, and the way things unfold in the first month could help the Wolves find their rhythm.

The Timberwolves play five of their first six games, and nine of their first 12, at home, more than half of which come against teams projected to have a difficult time making the playoffs. They open against Chet Holmgren and the Oklahoma City Thunder on Oct. 19 at Target Center, play the rebuilding San Antonio Spurs three times and also have Houston at home in that stretch.

The carpet is being rolled out for them in what is becoming a highly anticipated season, and that could be important. The trade for Rudy Gobert has, at least to this point, been the biggest deal in the NBA this summer. The Wolves sent out five players in the trade. Three of them — Patrick Beverley, Malik Beasley and Jarred Vanderbilt — were critical parts of the team that surprised many to win 46 games and qualify for the playoffs last season.

Gobert’s presence changes everything for Minnesota. He is a traditional big who excels near the rim, blocks shots and sets screens. The Wolves haven’t had a player like him at that position, probably, since Nikola Peković was roaming the paint. And as much affection as everyone has for Pek, he wasn’t near the defender Gobert is.

Gobert’s arrival pushes Karl-Anthony Towns from center to power forward. It instantly morphs the Wolves from a team that was almost always too small in the previous several years to one that is oversized. A change that drastic could take some time for everyone to adjust. Another element of the home-heavy first 12 games that should help with that process: The Wolves have just one back-to-back, with two straight home games against Milwaukee and Houston on Nov. 4 and 5. That means coach Chris Finch will have some practice days to help work through the early kinks he sees from the big guys.

New president of basketball operations Tim Connelly added Kyle Anderson, Bryn Forbes and Austin Rivers as veterans to give the team depth. Throw rookies Wendell Moore Jr. and Josh Minott into the mix, and the Wolves will have five new faces in the locker room next season. It’s just a lot of change for a team that often pointed to the chemistry it had last season as a major reason for its success. Some time on the road in the preseason should help them start to come together, but not having to get on a plane every other day in October and November won’t hurt, either.

Perception, of course, also can always be dangerous. Even the bad teams typically play better early in the season than they do late, when the grind of the 82 games and the inevitability of a trip to the lottery take their toll. The Wolves play the Thunder twice in the first three games, including a trip to Oklahoma City on Oct. 23. They will not be in tank mode so early. Holmgren will be hyped to open his career in his hometown, Josh Giddey and the rest of a juicy young roster will be amped, and the Wolves will definitely face some pushback if they try to bully the kids.

If Donovan Mitchell is still in Utah to start the season, you can bet he will be ready to go at his former longtime teammate Gobert in the second game of the season Oct. 21 at Target Center. And if the Wolves are just a little shaky while they try to figure out this new look, things could go a little haywire.

But the Wolves couldn’t have asked for a much better start to the season than the NBA gave them. Things even out, and there will be some daunting stretches later in the season, including 17 of their final 26 games being on the road. If the season plays out like they believe it can, they will be pushing for home-court advantage in the first round of the playoffs by that point.

More thoughts on the schedule:

It will be hard to find a more intense two-game set in the Wolves’ schedule. This has nothing to do with playoff positioning or seeding and everything to do with old grudges being renewed.

First comes a date in Philly with the 76ers, where Joel Embiid will renew acquaintances with Towns. But this time, Towns will be bringing another friend with him in Gobert who has gone toe-to-toe with the big fella for years. Three of the four best centers in the league on the court at the same time, none of whom is afraid to talk a little smack. Let’s go.

Then, Jimmy Butler will come to Minnesota for the annual boo fest. The Heat haven’t fared well against Minnesota since Butler landed in Miami, and the increased expectations on the Timberwolves should only add fuel to that fire.

San Antonio traded All-Star Dejounte Murray to Atlanta in the offseason to jumpstart a rebuild, but the Spurs probably won’t be pushovers in the early going. I wouldn’t be surprised if two games against the Timberwolves last season stuck in their minds. The Wolves left Towns in the game at San Antonio in March so he could score 60 points. Then in April, coach Gregg Popovich did not seem pleased at the end of a Timberwolves win as Anthony Edwards chucked shot after shot looking for 50 but falling a point short.

Popovich usually doesn’t get involved in petty grudges for motivational tactics, but some of the players may remember the embarrassment they suffered and have a little extra mustard on their performances in the fall.

Gobert doesn’t have to wait long to see the team he spent the first nine years of his career with, but the bigger matchup will come Dec. 9 when the Timberwolves go to Utah for the first time. Gobert was a very popular player with the Jazz and was deeply involved in the community in Utah, so the emotions will no doubt be running high.

Even better, Gobert and the Jazz seem to have split on good terms. Gobert was understanding of the Jazz’s desire to pivot away from a Mitchell-Gobert core, and the Jazz were appreciative of the way Gobert handled his exit. There were no trade demands, no anonymous quotes trashing each other on the way out; just mutual respect all the way around. It should make for a more heartwarming reunion than LeBron James returning to Cleveland the first time or Butler coming back to Minnesota.

The home game against the Jazz in October will be a great chance to welcome back Vanderbilt, Beasley, Leandro Bolmaro and, provided he doesn’t relocate before then, Beverley. The Wolves no doubt will honor them with some in-game acknowledgement, which is exactly what they deserve.

The Gobert acquisition didn’t open the floodgates for national television games, but it did give the Wolves an uptick in appearances after the last few seasons of rare chances to play to a countrywide audience. The Wolves played 25 national games after acquiring Butler but are only slated for 16 so far this season. That is still a big improvement.

They are slated to appear on TNT four times: Nov. 1 at Phoenix; Feb. 7 at Denver; Feb. 28 at the LA Clippers; and March 7 vs. Philadelphia.

The remaining six are on NBA TV: Oct. 30 at San Antonio; Nov. 19 at Philadelphia; Dec. 23 at Boston; Jan. 27 at Memphis; March 26 at Golden State; and March 31 vs. the Los Angeles Lakers). The game against the Grizzlies in January is part of a new “Rivals Week” promotion the league is doing to try to add some spice to the regular season. Given the heated showdown in the playoffs, Memphis was a natural fit. The Nuggets might be the only other real candidate (the Heat and 76ers being Eastern Conference teams eliminates them from contention).

A couple of quick thoughts on the national schedule:

Several particularly daunting stretches during the season are packed with opponents that will put the Wolves to the test on a near nightly basis.

The schedule makers were kind to the Wolves early but did them no favors late.