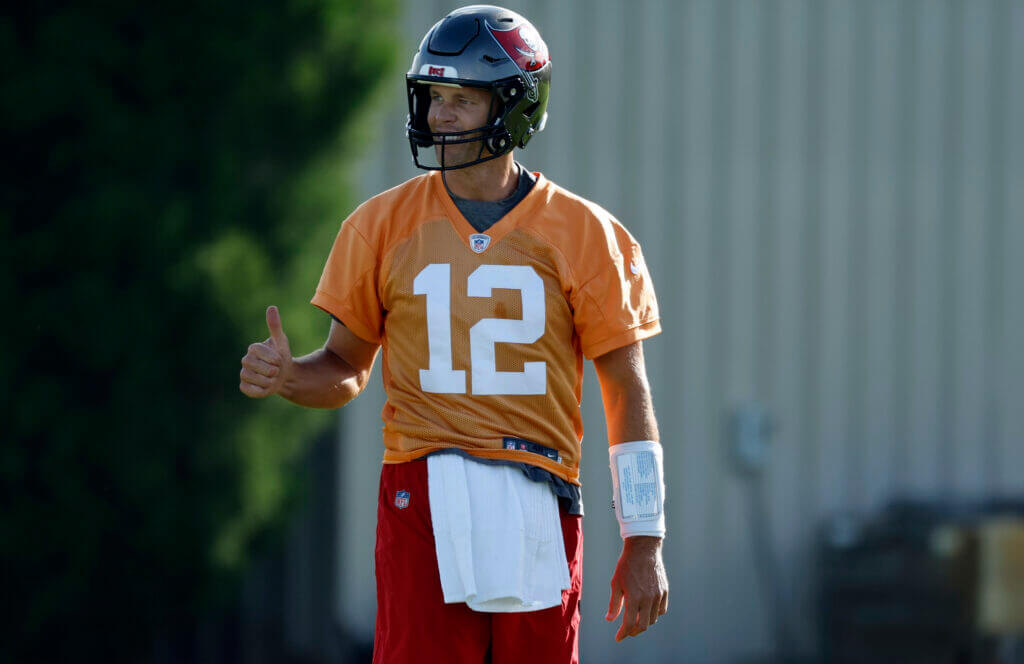 For all the uncertainty that an 11-day absence in the middle of training camp will naturally bring, Tom Brady was back at Bucs practice on Monday afternoon, a sense of normalcy returning with him to the franchise.

Brady has only taken questions from reporters twice since the end of last season, and might not do so until the middle of Week 1 in preparation for the opener at the Cowboys, as required for starting quarterbacks. So there are no details as to the “personal matters” that took him away from the Bucs, other than Bucs leadership saying they had agreed to an extended leave from the team before training camp even started.

Here it is: Tom Brady arrives at Bucs practice. pic.twitter.com/z8dA9nc0Bm

Brady appeared to take a larger number of reps than normal to get himself caught up on the rhythm of practice on a hot Florida afternoon. Tight end Cameron Brate said the quarterback seemed very much like his usual prepared self.

“Wherever Tom was, he was working out still and getting his reps in,” he said. “If anyone can get away from the 11-day break during training camp, it’s Tom. He came back firing on all cylinders again today. We’re all excited he’s back and ready to move on with that.”

Progress from injuries at receiver

Brady’s return Monday coincided with two other significant returns, starting with receiver Mike Evans practicing for the first time since he left drills Aug. 5 with a hamstring injury. Another receiver on the mend, Chris Godwin, took part in 11-on-11 drills while wearing a black non-contact jersey, another step in his recovery from knee surgery in January.

Three other veteran receivers — Russell Gage, Cyril Grayson and Breshad Perriman — remain held out with lingering injuries. Gage is limited by a hamstring injury but still has time to return healthy for the opener. Grayson and Perriman, who both caught game-winning touchdowns last season, are at risk of being cut if they can’t get back to practice soon. Their days might be numbered even if they’re healthy because of the Bucs’ strong depth at the position.

Other Bucs players are recovering as well: right tackle Tristan Wirfs, who strained an oblique Thursday and missed the Titans game, watched practice and is day-to-day, just “sore” according to Bowles. Safety Keanu Neal, who injured his arm in Nashville and didn’t play Saturday, was working on the side with trainers Monday. Cornerback Zyon McCollum, running back Gio Bernard and linebacker Grant Stuard remain sidelined with injuries that kept them out of Saturday’s game.

Will starters play Saturday vs. Colts?

Bowles said he still hasn’t decided how much or whether his starters will play in Saturday’s preseason finale at the Colts. The Bucs held 33 players out against the Dolphins and another 25 against the Titans, with running back Leonard Fournette and outside linebacker Joe Tryon-Shoyinka among the biggest names to see limited work in Nashville.

Brady has almost always made at least one preseason appearance in his 22 NFL seasons, and could benefit from live-game reps with new center Robert Hainsey, as well as new offensive weapons like receiver Julio Jones and tight end Kyle Rudolph. Bowles said he’ll wait until later in the week to decide who to play and for how long Saturday.

As a reminder of the risk of playing in preseason, the Bucs put two players on injured reserve Monday in guard Aaron Stinnie and outside linebacker Cam Gill, ending their seasons. Gill sustained a Lisfranc injury to his right foot against Miami, and Stinnie tore the ACL and MCL in his left knee in Saturday’s loss to the Titans.

The Bucs had until Tuesday afternoon to make five moves to get to the NFL’s 80-player roster cutdown, and they also cut safety Troy Warner, receiver Vyncint Smith and tight end Bug Howard to get there.

After losing Stinnie for the season, the Bucs could have made a move to bring in a veteran for competition, but they didn’t Monday. Rookie Luke Goedeke, a second-round pick from Central Michigan who started Saturday’s game but also had two holding penalties, was still working with the first team at left guard. His closest competition, Nick Leverett, worked as the second-string center, and Bowles said they have confidence in their young linemen.

How much of a move do the Bucs need to make to offset the loss of Aaron Stinnie? We look at staying in-house with youth, available signings and even a potential trade partner: https://t.co/O5NEfUAA8e

“We like our in-house options, but there’s got to be a player available for us to like to add a player,” Bowles said. “We’re not just going to sign one to sign one. There’s nothing out there for us to sign, but at the same time, we’re comfortable with the guys we have right now.”

Bowles said he’s “fairly close” to naming a Week 1 starter at left guard, saying he’ll look at the play in Saturday’s game and the building chemistry with the rest of the offensive line.