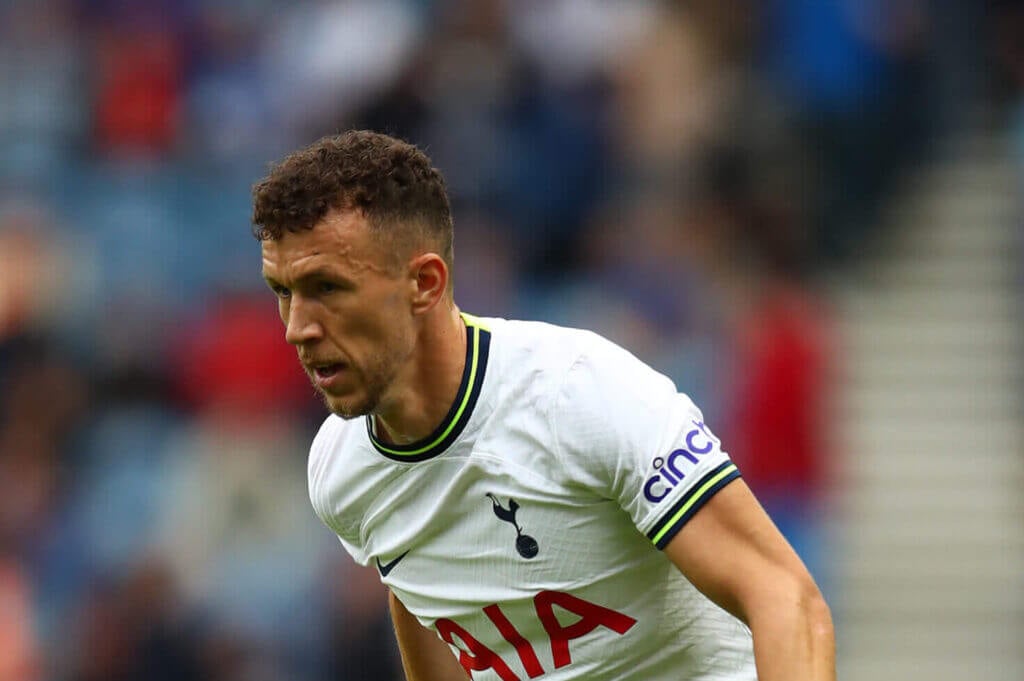 Within the first 25 minutes of Tottenham Hotspur’s friendly against Roma on Saturday night, Ivan Perisic and Matt Doherty did more attacking than Antonio Conte’s wing-backs managed in the entirety of some matches last season.

After five minutes, Doherty broke into the box from Eric Dier’s long pass and found Harry Kane. Shortly after Doherty just failed to get on the end of Pierre-Emile Hojbjerg’s cross from a few yards out. Doherty then dropped into the central attacking space we saw him in once he hit form between February and April last season, before being flagged offside as he had a header tipped onto the crossbar.

Making his first Spurs start, Perisic had been quieter up until this point, but in the 25th minute, he sprinted all the way across the pitch to the inside-right channel to nod a cross from inside the box back to Son Heung-min for a shot that went over.

We’ve waited a while, but with Perisic in the team, it looks like we might be seeing the kind of wing-backs Conte has wanted, but not really had, since taking over at Spurs. Doherty looks stylistically a good fit — the question is whether he has the quality. Djed Spence should be similarly well suited, with the question mark over him more about how long he’ll take to adapt to the Premier League.

It’s worth remembering, as head coach Conte was at pains to point out after his side lost 1-0 to Roma, that both Perisic and Doherty are a long way from being fully fit having each picked up serious injuries at the end of last season.

“Currently, we have two players, Ivan Perisic and Doherty, that have to continue to work and reach the peak of fitness because after a long injury, they are struggling a lot,” Conte said. “We need to have patience.

“He has to continue to work because at this moment he’s not the Ivan Perisic I know. That is normal though, but I’m happy because he reduced the time to recover from his injury. It was the same for Doherty. I hope to see him like last season.”

Even if he’s not yet completely recovered physically, you could see why Conte was so keen to sign Perisic. He knows from having worked with him at Inter how effective he is from wing-back, underlined by eight goals and seven assists in 35 Serie A games last season.

As the game wore on, Perisic started to have more and more of an influence. After 34 minutes, he smashed a shot over from long range, before coming a lot closer just after from a similar distance with a low shot that whistled inches past the far post.

He then worked a yard to get to the byline and hang up a cross that Rui Patricio held onto. It was the same kind of movement that led to a headed chance for Richarlison in the friendly win at Rangers the previous weekend. He finished the half by bamboozling Paulo Dybala with a clever stepover that drew a foul.

Perhaps the moment that best showed the wing-backs working in tandem came early in the second half when Doherty did well down the right and moved into the box on his left-hand side. It was reminiscent of the move that led to his goal for Wolverhampton Wanderers against Manchester City in December 2019.

On this occasion, though, he couldn’t quite get the shot away. But no matter, Doherty’s fellow wing-back was also in the box, and when it fell to him, Perisic cut inside for a shot that was deflected wide (though a goal kick was given). The shot came from Perisic’s right foot — the two in the first were with his left – and offered a reminder of how extraordinarily two-footed he is.

Just after the hour mark, Perisic was so advanced he was flagged offside after receiving Hojbjerg’s pass in front of the six-yard line. He then burst into the box from Son’s through ball and was denied only by Chris Smalling’s last-ditch tackle.

By the time Perisic was replaced after 75 minutes by Ryan Sessegnon, it felt as though he had put himself in pole position to start against Southampton on Saturday. Sessegnon improved a lot in the second half of last season under Conte, but Perisic genuinely does play like a winger (he was one for most of his career) and offers the kind of intensity in the position that Conte demands.

He also shares Conte’s relentlessness and winning mentality, having hoovered up titles throughout his career.

“He’s an important player because he’s really good,” Conte said of Perisic with characteristic bluntness after the game. “He moves forward, good in one-v-ones, and then he can use both feet.

On the other side, though, Conte still has a dilemma. Doherty looks like being the most suitable option while Spence acclimatises, but seeing Perisic in full flight was a reminder that when on the ball, Doherty lacks the explosivity to burst past players — especially as he edges his way back towards full fitness. His off-the-ball running is excellent though, and that may be enough for now until Spence is ready to start games regularly. Of the other options, Emerson Royal is limited going forward and Lucas Moura is still very new to the role.

It’s still a bit of a conundrum for Conte, as is the ongoing issue of a lack of creativity from midfield, which in the Roma game offered a good illustration of why Spurs want to sign an attacking midfielder. Though the very hot and humid conditions may have contributed to Spurs’ sluggishness, and the situation will likely be different once Yves Bissouma and Rodrigo Bentancur are partnered together. The latter replaced the former at half-time on Saturday night.

Either way, Conte can at least be satisfied that even when half-fit, Perisic looks like he will offer exactly what he wants from his left wing-back.