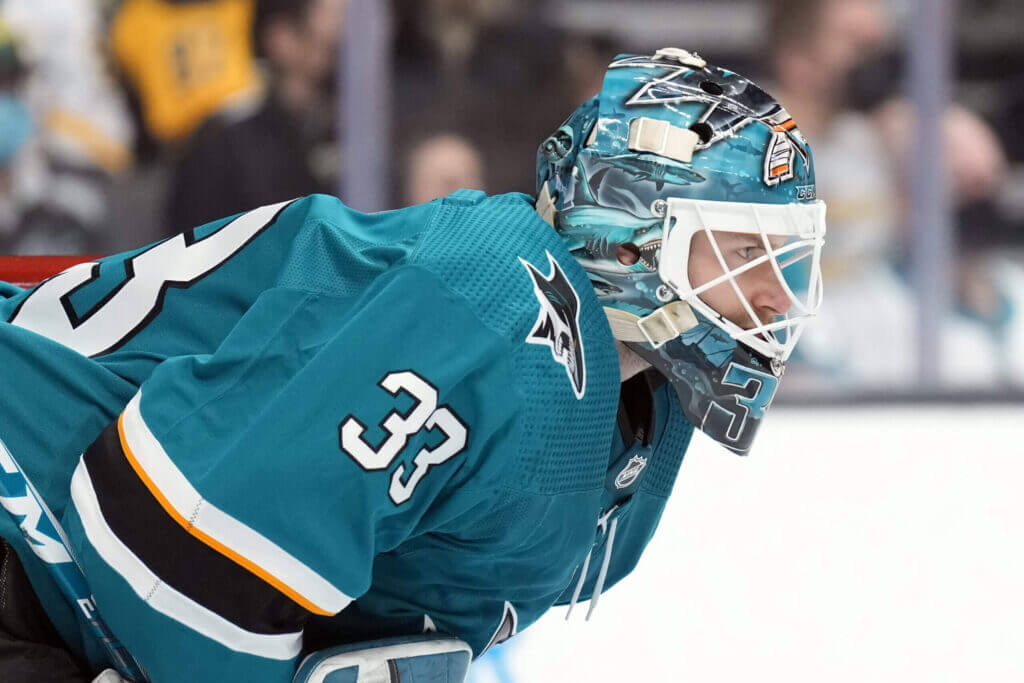 Adin Hill was on the eighth hole of a golf course, staring down a 30-foot putt, in his hometown of Calgary on Monday afternoon when he received a phone call informing him he’d been traded to the Vegas Golden Knights.

Hill quickly hit his putt, which he says missed by inches, and promptly walked off the course. The 26-year-old goalie, who was traded by the San Jose Sharks in exchange for a fourth-round NHL Draft pick, is excited to join the Golden Knights and compete for the job to backstop a team entering the season with high expectations for the first time in his NHL career.

Training camp is less than three weeks away, and the biggest competition on the ice at City National Arena this September will happen in the crease.

The news that Robin Lehner will miss the season after undergoing double hip surgery this summer shook up the Golden Knights in net. It was only a little more than a year ago that Vegas rode the ultra-talented duo of Lehner and Marc-Andre Fleury to Vezina and Jennings trophies in 2020-21, but the club now finds itself entering the season without a goalie who has served as a regular starter in the NHL.

With all viable starters in free agency already signed, Vegas opted to add Hill by trading a fourth-round pick in the 2024 draft to San Jose on Monday. He’ll join the goalie competition in Vegas that already includes Logan Thompson and Laurent Brossoit.

💻 Hill: I’m excited to join this team and make a run at the playoffs here. It’s an exciting time. pic.twitter.com/3CaPvZxGfC

The trade came less than a week after general manager Kelly McCrimmon declared he was comfortable heading into the season with Thompson and Brossoit, but he said the deal for Hill came together quickly.

“It’s just an example of how quickly things can change in our business,” McCrimmon said Tuesday. “This puts another really good goalie into our organization and into the mix. It gives us a lot more comfort in terms of the position heading into the year.”

Vegas now has three goalies with NHL experience — four if you count free-agent signing Michael Hutchinson — but none has served as a regular starter at the NHL level. It should make for an intense battle in net that could last into the season.

Brossoit has the most experience of the group with 106 career games, but he’s also coming off surgery this summer and it’s unclear whether he’ll be ready for camp or the start of the regular season. Here’s how Vegas’ top three goalies’ career stats stack up:

It’s a far stretch from when Vegas had the choice of Fleury and Lehner every night. Those are two elite NHL goalies with a much higher ceiling and floor. Even last season, when Lehner battled injuries and had one of the worst statistical years of his career, he finished 16th in the NHL in goals saved above expected, with 6.1.

For reference, Vegas’ three netminders heading into this season ranked 31st (Thompson), 35th (Brossoit) and 40th (Hill). That doesn’t necessarily mean one can’t rise to the occasion, especially if coach Bruce Cassidy can get the Golden Knights playing defense the way his teams did in Boston.

Hill and Thompson went to the same middle school and have known each other since they were young, and Hill believes that will fuel this fall’s camp competition to an even higher level.

“It’ll be fun,” Hill said Tuesday. “I can always say that some of the best goalie competitions that I’ve had are when you’re friends off the ice and you compete on the ice. It makes it a lot more fun. Hopefully, at the end of the day, you push each other to be better and that results in team success.”

McCrimmon said he believes Hill gives Vegas another NHL-caliber option in net, and with the way that injuries have ravaged this team over the past year, that’s a good thing.

Hill’s stats won’t impress you, but it’s important to consider the context. He has played on two struggling clubs in Arizona and San Jose and has faced high-quality competition, especially considering he’s never been a full-time starter.

“Size and athletic ability,” McCrimmon said when asked what he likes about Hill, who is listed at 6-foot-6, 214 pounds. “If you look at his body of work, he’s had a lot of starts over the last couple of seasons against top-10 teams. I don’t know exactly the rationale behind that, but that’s how it’s played out for him, and he’s played well in those situations. I think he’s got room left in his development curve to continue to improve and impress as a goaltender.”

Of Hill’s 44 NHL appearances over the past two seasons, 19 (43.1 percent) came against teams that finished with a top-10 record that year. In those games, he posted a less-than-stellar record of 5-14-0 with a save percentage of .900, but he has shown promise with some special performances when the team in front of him was overmatched.

Vegas’ defense lapsed last season, at least partially due to all of the injuries, but if the Golden Knights can return to the structured play that helped them to two straight conference finals in 2020 and 2021, it could help Hill improve drastically. Goalies’ statistics are often a product of their surroundings, and Hill hasn’t had any favors in that aspect.

“That’s not to speak of the two organizations that he’s played in, but I think when players switch organizations, that’s always something that you’re interested to see,” McCrimmon said. “What does the player look like in a new set of surroundings? We’ll see. That will be something that’s interesting to watch play out.”

For that reason above all else, Hill is excited to come to Vegas. He’s thrilled to compete for the job to backstop a team with aspirations for the Stanley Cup Final and then some.

“I know they’re a great hockey team,” Hill said. “You look up and down their roster, they’ve got a lot of good pieces. They want to make the playoffs and make a push for the Cup. I’m excited to be here and be a part of that. Hopefully, I can add to that.”