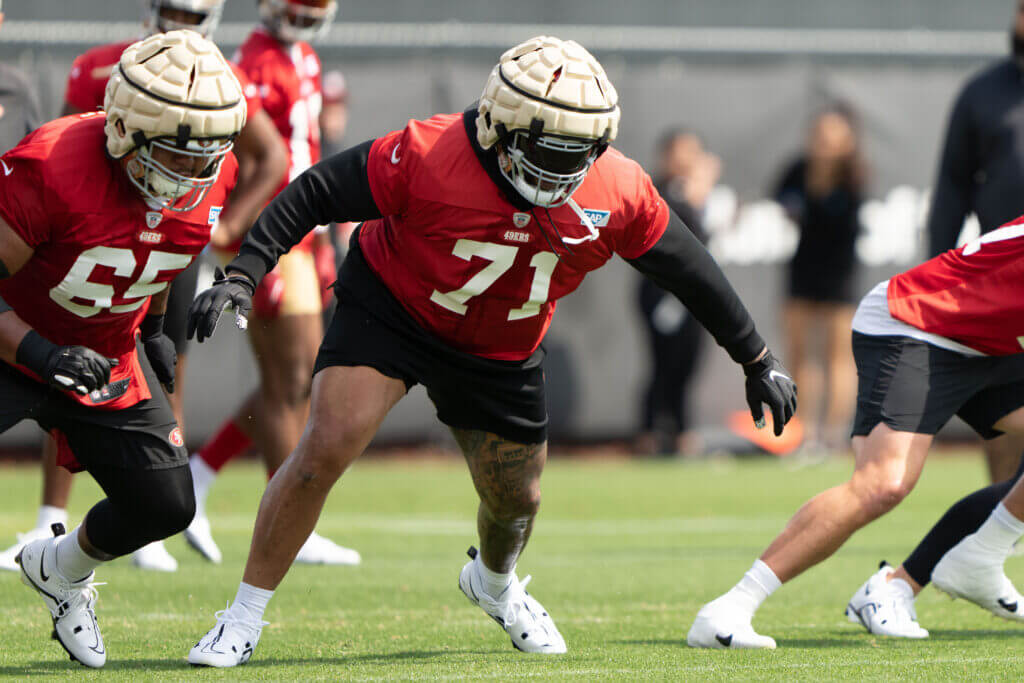 SANTA CLARA, Calif. — When it comes to offensive linemen, Trent Williams is NFL royalty while Jason Poe is … well, he’s an undersized, undrafted rookie guard who played at Mercer University.

It doesn’t get any humbler than that.

So you can imagine Poe’s surprise when he got a text from Williams in June inviting him to Houston to train with him during the month-long break between the 49ers’ spring practices and training camp. Poe wasn’t sure what he was reading at first.

“Because, you know, I’d talked to him a couple of times but not much,” he said. “Then (Williams wrote), ‘I want you to come down here. I see something in you — potential.’ And he brought me down there, put me under his wing and he trained me all summer until we got back.”

Williams invited another rookie, too, fourth-round pick Spencer Burford, who drove in from his hometown of San Antonio. The trio lifted weights at the gym Williams co-owns with former NFL running back Adrian Peterson, ran up hills and in sand, spent time at the track and practiced their boxing skills in an effort to sharpen their initial strikes.

They rehearsed firing off the line of scrimmage and running on an angle — essential for the zone-blocking plays in Kyle Shanahan’s offense. Williams also invited them to his home to learn more about the rookies and to offer advice on how to be a professional.

Their summer work appears to be paying off.

When spring practices ended, Poe was working at right guard with the third-team offense, exactly where you’d expect a small-school prospect to spend his rookie season. But he was elevated to the second team for training camp and he’s been playing on both the right and left side of that unit.

Jason Poe (62) has a decidedly lower profile than most NFL offensive linemen. But he’s handled himself well in camp so far and dominated his reps in 1-on-1 pass-rush drills Tuesday. pic.twitter.com/aACWeBcn0B

Burford’s leap has been even more dramatic. He was a second-teamer in June. So far in training camp, he’s taken every first-team repetition at right guard. With every solid practice, he becomes a more realistic option to start in that spot in Week 1 in Chicago.

Both players also stood out in Tuesday’s fully padded practice, the 49ers’ most grueling session so far. That was the caveat to their surprise roles to start camp: It was one thing to look the part during the initial, ease-in week and another to be competent when the pads go on and the rough stuff truly begins.

But neither rookie has cracked so far. Tuesday was the first day in which offensive and defensive linemen squared off in one-on-one pass rush drills. Burford was impressive in his four chances against Charles Omenihu (twice), Kevin Givens and Robert Nkemdiche. After stonewalling Givens, perhaps the 49ers’ quickest defensive tackle, Burford got an enthusiastic high-five from Williams.

Poe was just as impressive. The biggest question with him involves his stature. He’s 6-foot-1, 300 pounds, giving him the profile of a bowling ball. Talent evaluators wondered how a lineman who lacks length would fare in one-on-one situations.

On Tuesday, at least, the answer was: pretty damn well.

Poe’s combination of quick feet and low center of gravity proved impenetrable in the drill. He not only beat fellow undrafted rookie Kevin Atkins, but he also had two wins against nine-year veteran Akeem Spence and put Spence on the ground on one of his attempts. That also earned a hand-slap from Williams, who earlier walled off Nick Bosa on Bosa’s two attempts.

Williams said he could tell right away that Poe had talent. In fact, he could feel it. He said he was holding a blocking pad on the first day of the June minicamp when he felt a strong jolt. It was Poe.

“I was like, ‘Oh, damn, who is that?’” Williams recalled. “I didn’t even see his name on the back of his jersey or nothing like that. His first step off the ball, it’s extremely quick.”

He said Burford, who played tackle at Texas-San Antonio, also has good feet as well as uncommon confidence. Williams said even a 12-year veteran like himself will commit an error in a game and let that mistake nag him for the rest of the season. Burford is so young and eager that he doesn’t have that hindrance — not yet, at least — and that allows him to play freely and aggressively.

“So I was just impressed with how confident he was in using his technique, how explosive he was, how he plays with good hands, good body position,” Williams said. “So I knew he would be a great player. Obviously, he worked his way into the starting lineup. I think he deserved that, he worked pretty hard for it. And I’m rooting for him.”

Williams signed a $138 million contract extension last year. He owns Ferraris, eats at fancy steakhouses and once teamed with Peterson in a pickup basketball game against rapper Drake and his crew. (It was a one-sided affair.) But the rookie offensive linemen said it was all business and no glitz when they were with the veteran in Houston.

The one extravagance came when they were ready to head back to Santa Clara.

Burford flew back from his native San Antonio. Poe said he was ready to fly commercially, too. In fact, he’d found a ticket to the Bay Area on Delta. But he didn’t need it after Williams called him one day and told him he could hitch a ride on his private jet.

“I was about to ride back on a regular airline and he said, ‘You can ride with me.’ And I was like, ‘OK,’” Poe said with a laugh. “It was amazing. It was an experience of a lifetime. If you ever played GTA (Grand Theft Auto) that’s what it felt like — flying on planes, but it’s in real life.”

A kid playing with a ball next to a tank trap: Paul Lowe’s best photograph