That was the theme of Friday’s preseason opener, a 28-21 win for the 49ers over the Packers in which Trey Lance threw a touchdown bomb to a rookie, Danny Gray, in the first quarter and another rookie, Brock Purdy, tossed the go-ahead touchdown in the fourth quarter.

Who stood out in the game? Here are five choices, beginning with the only non-rookie of the group.

The 49ers’ 2022 quarterback starter was prominent before the game, during the first quarter and even after he’d been pulled out.

When Purdy hit Tanner Hudson for the game’s go-ahead touchdown with five minutes remaining, Lance was the first person off the sideline to congratulate Purdy with a flying chest bump. Then he ran into the end zone to fetch the rookie’s first NFL touchdown ball.

“I was just sitting on the bench and he was like, ‘Yeah, I got your ball, by the way,’” a glowing Purdy said after the game. “And I said, ‘What do you mean?’ Because Tanner threw it in the back of the end zone. And he booked it — Trey went and got it. I’m like ‘Dude, you’re literally the best.’ For him to go and do that — he’s humble and I look up to that dude a lot.”

Lance said he also retrieved Gray’s first-ever touchdown score. Why? Because George Kittle did the same for him last year after he threw his first touchdown pass, a deep ball to Trent Sherfield in the 2021 preseason opener.

“It’s a special feeling,” Lance said. “And I wanted the guys to experience that.”

Before the game, Lance broke down the team huddle. He was also the first 49er out of the tunnel when the team entered the field. And, of course, there was the in-game performance, including the calm, on-the-money throw to Gray that traveled 42 yards in the air.

“He could throw the ball real far,” he insisted.

Perhaps he could, but he didn’t do so often. In fact, Garoppolo only had one throw in the last two seasons — in Week 8 against the Bears — that traveled as far as Lance’s did on Friday.

Accuracy has been an issue for Lance in training camp practices. It wasn’t on Friday. He finished 4-5 for 92 yards and had a perfect passer rating of 158.3.

Last season no 49ers cornerback had more than one interception. Samuel Womack III had two against Packers quarterback Jordan Love, both in the second quarter.

On the first, he stuck with receiver Romeo Doubs on a sideline route, then stripped Doubs of the ball as they were going to the ground. Later in the quarter, Womack didn’t let slot receiver Amari Rodgers out of his hip pocket as he ran across the middle, then spun around just as Love’s pass was arriving. He made the catch and returned the ball 50 yards.

To this point, veteran Darqueze Dennard has been the team’s top nickelback. But Womack, the fifth-rounder, has taken some first-team snaps in practice, too, and Shanahan indicated the competition is ongoing. Rookie nickelbacks might be rare in the NFL, but Shanahan noted he was part of a team, the 2014 Browns, on which an undrafted rookie started the entire season. That player: K’Waun Williams, the longtime 49ers’ nickelback whom Womack is trying to replace this season.

Womack certainly looked the part against the Packers. He has the height (5-foot-9) of a typical nickelback but the arm length (32 inches) of someone taller. He had an impressive 46 pass deflections at Toledo and put his long arms to use on the strip-interception. He also was active defending the run. Womack finished with one tackle and served as a gunner on punt coverage.

Have we mentioned that Gray is fast? The one-time track star showed off his wheels by running away from both the coverage and the pursuit on the 76-yard touchdown from Lance. He got a free release, was past the safety after 1.5 seconds and created a no-brainer decision for the quarterback.

Nate Sudfeld also hit Gray on a deep crosser for 23 yards at the end of the first half. There also were two near-miss incompletions to Gray. Lance was a bit high and wide on a sideline throw at the end of the 49ers’ first possession. Gray made the catch but was pulled out of bounds. He and Sudfeld also couldn’t connect on a short throw over the middle in the second quarter.

He and fellow receiver Ray-Ray McCloud III were targeted a team-high four times. Gray led all pass catchers in the game with 99 receiving yards. 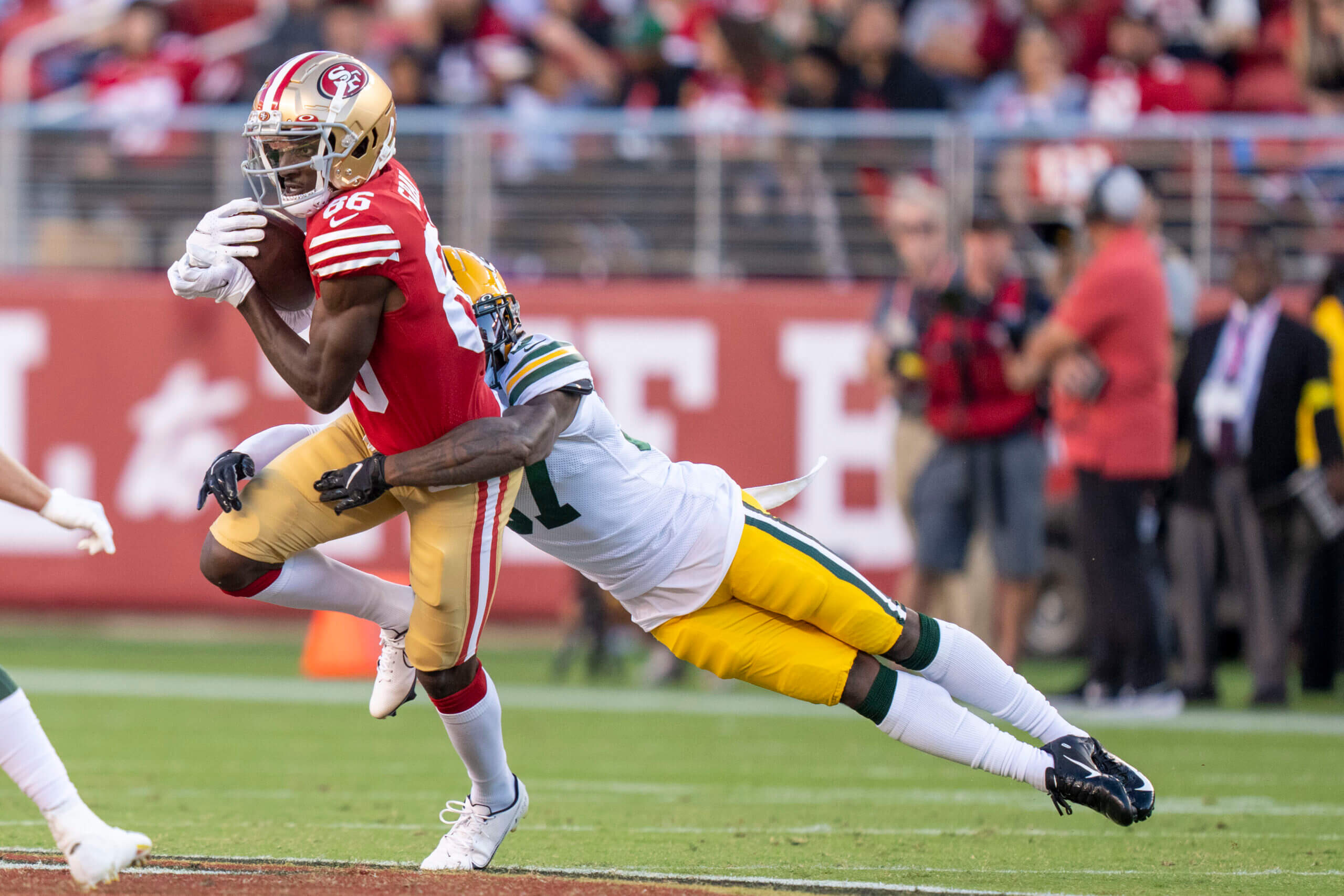 Danny Gray led all receivers on Friday with 99 yards, plus the touchdown. (Kyle Terada / USA Today)

Linebackers Fred Warner, Dre Greenlaw and Azeez Al-Shaair were among the 20 players who didn’t suit up for the 49ers on Friday. Starting in their place: Oren Burks, Demetrius Flannigan-Fowles and Marcelino McCrary-Ball.

Burks and Flannigan-Fowles weren’t surprises. The 49ers targeted Burks in free agency because they wanted some heft at linebacker and a stalwart on special teams. Flannigan-Fowles has been with the team since 2019 and knows the defense.

McCrary-Ball wasn’t a surprise either if you’ve been following training camp practices. The speedy undrafted rookie out of Indiana has made plays all over the field, including an interception of Sudfeld earlier in the week. He got his second interception of the summer at the end of the first quarter when he gathered in a tipped pass at San Francico’s 4-yard line, then showed off his speed by returning it 57 yards and setting up Sudfeld’s 39-yard touchdown to McCloud.

The 49ers probably will keep five linebackers on their active roster. Warner, Greenlaw, Al-Shaair and Burks, who finished with a game-high eight tackles, are locks if they’re healthy. The fifth guy? McCrary-Ball, who had three tackles on defense and another on special teams, seems to be challenging Flannigan-Fowles for that spot.

The fourth-round pick from Texas-San Antonio had one of the longest outings of any 49er. He started the game at right guard and was the only offensive starter still playing when the second half began. He was in for one series in the third quarter, then gave way to fellow rookie Jason Poe, who trained with Burford and veteran Trent Williams in Houston last month.

Burford didn’t have any highlight-reel plays, of course. Offensive guards rarely do. And Shanahan noted that the rookie made some mistakes in the game. But the team’s belief in Burford was reflected in how many snaps he played. The 49ers want to give him enough experience at right guard so that he — and they — feel comfortable with him in that spot against the Bears on Sept. 11.

The inexperienced triumvirate of Burford, Aaron Banks (left guard) and Jake Brendel (center) started the game. Banks played the entire first half. Brendel played all but the final series of the first half.

• The outing wasn’t as auspicious for the 49ers’ top rookie, defensive lineman Drake Jackson. He left in the first half with a shoulder injury that Shanahan said was initially diagnosed as a stinger but that would require further testing.

• Veteran defensive back Dontae Johnson left the game in the fourth quarter with a rib injury.

• Two 49ers, cornerback Charvarius Ward and running back Elijah Mitchell, are dealing with hamstring strains. Running back Jeff Wilson Jr. missed the game due to a personal matter.

Why I’m telling my Sikh ‘aunties’: come on in, the water’s lovely