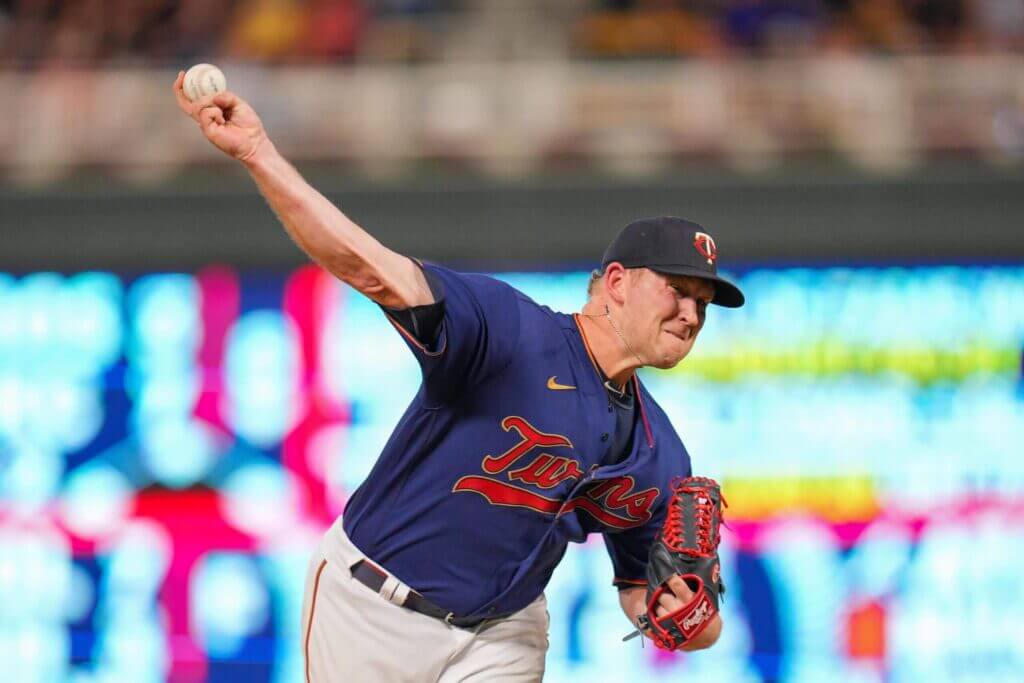 MINNEAPOLIS — The Twins got lucky Thursday night. Somehow, they didn’t lose their one-game lead in the American League Central despite a horrific performance from the bullpen.

Though Emilio Pagán, Trevor Megill and Tyler Duffey each got rocked in a 9-3 loss to the Toronto Blue Jays at Target Field, the Twins remained in first place, as Cleveland and Chicago lost.

But that consolation prize didn’t make Thursday’s blowup any easier to take.

Pagán followed five shutout frames from Sonny Gray by taking over with a one-run lead in the sixth inning and yielding three runs. After Megill pitched a scoreless inning, he returned for a second frame and gave up three runs before Duffey surrendered three more of his own.

“To see the game go in the direction that it did at the speed that it did, it’s tough to take,” Twins manager Rocco Baldelli said. “We have to pitch better.”

The Twins needed to do everything better on Thursday.

Facing All-Star pitcher Alex Manoah, the offense sputtered again. The Twins pushed across a run in the fourth inning when Manoah hit José Miranda with the bases loaded. But Manoah retired Jake Cave, who later homered, on a popout to shortstop.

Though the Twins scored a run in the sixth on Miranda’s RBI groundout to cut their deficit to 3-2, they left the tying run on and never got any closer.

Gray felt like he was close to a magnificent night but instead was off by a millimeter or so. The veteran demonstrated multiple times in his media session that he was just off the mark by holding his fingers close together as if to say he missed by only that much.

The difference he missed by resulted in five walks over five scoreless innings. Gray limited Toronto to a single and made pitches when he had to, including retiring Vladimir Guerrero Jr. on a bases-loaded groundout to escape a jam in the fifth.

“I feel like if maybe I could have brought it into the zone a little bit more, then I’ve got a potential to go really deep into that game,” Gray said. “I just felt like I was missing by that much all night.”

Still, Gray exited with a one-run lead as Baldelli turned it over to Pagán, who entered with a 2.16 ERA over his previous nine outings. But Teoscar Hernández tied the score with a solo homer off Pagán ahead of a Bo Bichette double. Lourdes Gurriel Jr. then rifled a single to right to put Toronto ahead for good. Whit Merrifield also had an RBI single off Pagán.

Leading by a run, Toronto broke through against Megill and Duffey in the eighth, tallying six runs. Guerrero’s three-run homer off Duffey was the big blow.

“There are very few pitchers in baseball who have missed as many bats as Pagán,” Baldelli said. “That’s generally about as good a sign as you’re going to get from a pitcher. The damage he’s given up has been there; it’s real.

Miranda went straight down. After his hand was struck by a pitch Thursday, the Twins rookie immediately crumpled to the ground.

Miranda started to have flashbacks to his 2016 season in the Gulf Coast League, when he was hit in the same neighborhood and suffered a fracture. But after the Twins training staff checked him out for several minutes, Miranda managed to stay in the game. He even acknowledged to Manoah that he was OK.

Miranda remained in the contest, though he was removed when the game was deemed out of reach. Afterward, Miranda said the Twins didn’t think he suffered a fracture and instead was dealing with a contusion.

He also said the team might have him get an X-ray Friday.

“I was kind of a little worried,” Miranda said. “I thought it was going to be worse, but they checked me out; it’s not broken. I was feeling all right playing.”

#MNTwins take the lead but DON’T HIT OUR ROOKIE 😡😡 pic.twitter.com/pAbbrL9zLx

“We may have dodged something there because it was a scary moment,” Baldelli said. “It hit (Miranda) pretty squarely. It was loud. In those instances a lot, you end up walking away really disappointed. But he continued to play on. We wrapped it. It’s a little swollen and a little sore, but normally guys are coming out in excruciating pain. Luckily, he did not, at least to this point. We’ll take it.”

To remain on schedule and start Friday, Mahle had to throw a bullpen session early Wednesday evening. He arrived at Target Field several hours after the Twins closed out a series win over Detroit on Wednesday to participate in the session.

“As soon as I landed, I kind of felt like this was where I needed to be,” Mahle said. “I texted my wife and everything. I was like, ‘I think you’re going to like it here.’ We’re excited.”

Mahle has to be thrilled to get as far away from Great American Ball Park as possible. In his career, Mahle has a 5.02 ERA at Cincinnati’s home park with 61 home runs allowed. By contrast, he has a 3.74 ERA and only 28 homers yielded on the road.

After the Reds made offseason trades to deal away Gray and Tucker Barnhart, among others, Mahle had a good idea he’d be dealt, too. That it was the Twins who acquired him didn’t surprise him.

“I kept in the loop, you know, on who was trying to trade for me and everything,” Mahle said. “I knew this was a real possibility, and probably the highest possibility, so I’ve been prepared for that for a while.”

Max Kepler hasn’t played since he suffered a broken toe July 24 in Detroit.

“The pain that I was dealing with for the first week was not very bearable for me, personally,” Kepler said. “But yeah, it’s not going to heal until the season’s over, so I’m going to have to deal with it and play through it.”

Though Kepler struggled at first, he said the swelling in his toe finally has subsided. He’s running, throwing and hitting, and he also worked in the outfield Wednesday and Thursday. The biggest challenge left for Kepler is his ability to move from side to side. But don’t be surprised to see him back on the field this weekend.

“Kep seems like he’s in a good place,” Baldelli said. “He’s able to do basically everything he needs to do in a workout setting. Combining that into a three-, three-and-a-half-hour baseball game and doing it for a full night and then doing it the next night is really probably the final question that you have to answer. At some point, you’ve just got to move forward and go for it and see if you can do it. … I don’t really know when he’s going to be back, but could he be back this weekend? I think it’s possible.”