A fully fit and in-form Tyrone Mings is still the strongest centre-half at Aston Villa.

So perhaps that’s the biggest issue right now. Not losing the captaincy — Mings is relaxed about that and has addressed it publicly. Or Steven Gerrard’s quotes about “looking me in the eye and showing that he’s ready to play”. (We’ll get to those shortly because they are not as damning as they sound.)

Getting Mings back to his best is key.

The question, if he isn’t playing, is how is that going to be possible?

Does Mings, out of the team for the first time since Gerrard was appointed in November against Bournemouth in last weekend’s season opener, have to work hard in training and wait for his chance?

As a wholehearted, committed leader who genuinely loves the club, he is not the type to sit on the bench, hoping the team fail to win without him so he can return to the side on the back of such adversity.

Could there be a place in the team for him alongside Saturday’s two central defensive starters Diego Carlos and Ezri Konsa? The chances of such a radical switch to a back three happening so early into the season appear slim.

It’s also unlikely Gerrard decides to make a change to his chosen centre-back pairing — the one he believes at present is the strongest — so early into the season, despite the disappointing 2-0 defeat on the south coast.

The smart money, therefore, is on Mings being among the substitutes again when Everton come to Villa Park on Saturday, a situation that will take some getting used to. The 29-year-old has been at the heart of Villa’s team for four seasons and has played a big part in the club’s successes in that time.

He will be aware of the errors that appeared too often last season. To get back to the best version of himself as a player, he has to cut them out.

Yet Mings has shown, week in and week out, that he’s brave, committed, a leader and able to read the danger.

Without the mistakes, he is Villa’s most assured defender and as Paul McGrath, the Irishman widely regarded as the club’s greatest ever at that job, says: “In my opinion, he ticks all the right boxes…get him in the team.”

Having watched Mings in claret and blue from his first appearance in February 2019 against Reading in the Championship, this writer still believes Villa are a better and more organised side when he plays. But one can also understand that, after a poor end to the last campaign, Gerrard wants to have a look at a Villa team without him in it.

It’s not as if Mings has been made the sole scapegoat here, either.

Konsa was taken out of the firing line last season after underperforming and Calum Chambers, who hasn’t done too much wrong in a Villa shirt since arriving from Arsenal on a free transfer in January, has also had to wait patiently for opportunities.

Now it’s Mings’ turn to have to win his place in Gerrard’s team back.

“When Tyrone is back at his best… he’ll get opportunities,” the manager says.

As for that “look me in the eye” quote, it can be discounted slightly because it’s a turn of phrase Gerrard often uses.

To the neutral it sounds brutal and as if Mings is not fully committed. That’s not the case. To The Athletic’s understanding, there has been no bust-up.

This demotion to the bench would still have taken him by surprise, though, and it’s understandable if he’s feeling a little confused. 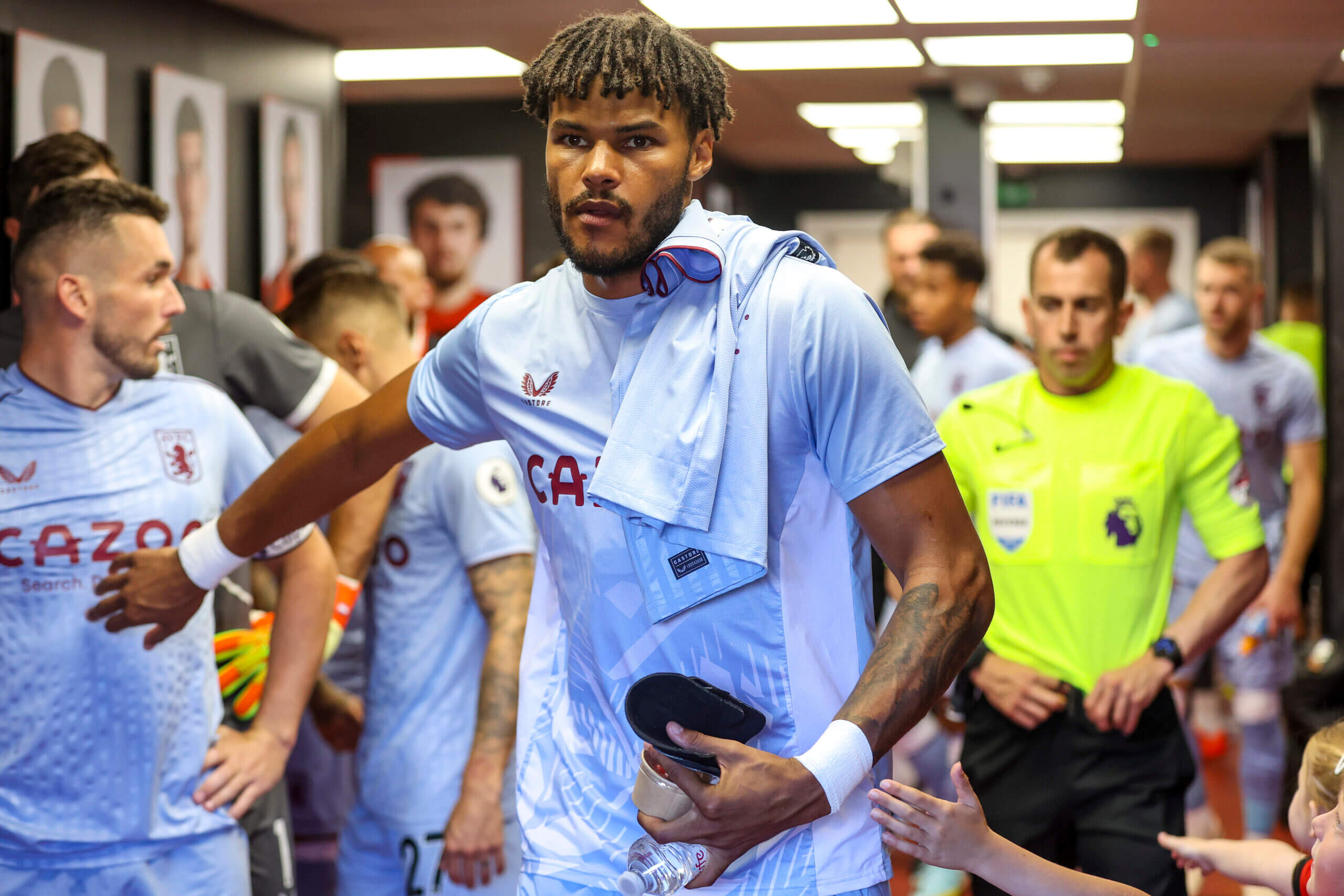 One of Gerrard’s reasons for changing captain (it had been made clear the position would be reassessed this summer) was to take the additional pressure off Mings, freeing him to focus on sharpening up his individual game.

It’s why the player did not react in a negative way when the news was delivered to him, not only in advance of a public announcement but a day before new skipper John McGinn was told.

Mings, who is close to the Scotland midfielder, tweeted his support when the change was made public. In the days that followed, he was said to have been a little quieter at training but certainly not sulking or downbeat.

He welcomed the chance to place a greater focus on getting back to his best — not that he was too far off it.

For a large period of most games last season, he was in good form. Minor lapses in concentration began to creep in, though, and perhaps that was the reason why he also lost his place in the England squad, despite holding a formidable record at international level. In Mings’ 17 games, England have kept 14 clean sheets.

But was he focusing too much on the collective or on monitoring others around him in a Villa shirt, and did that cause his own form to dip?

Mings is loud on the pitch, and not afraid to pull up team-mates if they underperform. Many of his colleagues over the years at Villa praise his work as captain. And the off-field work he did in his role as skipper to shine a positive light on the club was exceptional.

That chapter has passed now, but there is no bitterness.

How he is supposed to sharpen up his game when he is not playing is another story, though.

Whether he was dropped too soon is up for debate. Only time, and future results with or without him in the team, will tell us that.

A groin strain — not deemed serious enough to have prevented him playing against Bournemouth if selected — adds another layer to a complex situation. He has missed some training time and will need to be assessed throughout the week and before Villa host Saturday’s early kick-off.

It’s the chain of events over the last few weeks that have set up the widespread discussion over his place in the team.

Before the transfer window opened, he knew Villa were targeting another centre-half. Burnley’s James Tarkowski was considered at length as a Bosman signing before Carlos signed from Sevilla for £26million ($31.4m). Tarkowski ended up joining Everton.

Villa are very proud of that deal and believe they got a bargain — especially as clubs who have qualified for this season’s Champions League were also interested in the 29-year-old Brazilian.

For some time afterwards, it looked like Carlos and Mings would be the centre-backs to start the season. But, days after the captaincy news broke, a clear sign of further change occurred.

As what turned out to be the starting back line — Matty Cash, Konsa, Carlos and Lucas Digne — for the opening day of the season prepared for the final “public” pre-season game away at French club Rennes on July 30, Mings missed out.

Then came the omission from the starting XI a week later at the Vitality Stadium, the scene of so much frustration for Mings when he suffered an injury-ravaged spell as a Bournemouth player.

He was able to raise a smile as he held lengthy conversations with familiar backroom staff on the south coast before the warm-up; then, standing alongside McGinn, he went through the routine drills out on the pitch before taking a seat next to Chambers on the bench.

From that unusual vantage point, he watched on as Villa conceded an early opener and then again with 10 minutes to go.

Konsa and Carlos were not individually to blame for the two goals, or the defeat, and it’s impossible to say whether Mings’ presence would have reversed the result. Gerrard said the loss was not caused by the absence of his now former captain.

But as ever, questions are asked after you get beaten and, often, changes made for that game are debated.

Tyrone Mings Is good enough for Aston Villa, in my opinion he ticks all the right boxes, so how do you lose the Armband and your place in seconds . You don’t, so who said what to who, No one cares get him in the team. Respect. ☘️👍🏼. UTV.

McGrath’s take is that dropping the England centre-half was the wrong call.

He tweeted: “Tyrone Mings is good enough for Aston Villa. In my opinion he ticks all the right boxes, so how do you lose the armband and your place in seconds? You don’t, so who said what to who, no one cares. Get him in the team.”

Again, it’s understood there has not been a falling-out — not that it will stop the discussion around this topic.

The only thing that will do that is a run of Villa victories, and they haven’t been forthcoming for some time now.

A moment that changed me: a rebel fighter who risked his life for love was murdered, and part of me died too