It’s the usual process for Watford fans when they hear news of a new signing. Who’s his agent?

More often than not, it’s Mogi Bayat, who was involved in eight of last season’s deals (acting for either the club or player or both) for the 2021-22 season, as outlined by the FA.

So when news that Vakoun Bayo was joining filtered through, it was no surprise that Bayat was the man involved in the deal. The association with the name Bayat and this impending transfer goes deeper though and his move from Charleroi to Watford follows an intriguing pattern. The Belgian club’s managing director, who is also the former president of the Belgian FA, is Mehdi Bayat, the brother of Mogi (that’s his nickname — his real name is Arnaud).

The striker had just been signed officially by the Belgian side. On May 16, Charleroi said they’d “exercised an option to buy” the Ivorian from Gent following a six-month loan. “The staff, the management, the players and the whole big Sporting family are delighted with the extension of Vakoun Bayo’s stay under our colours and wish him every success for the rest of his adventures,” a statement read.

That “adventure” lasted less than a month and included no further matches for Charleroi.

Bayo has agreed a five-year contract at Vicarage Road and has begun training with Rob Edwards’ squad after passing a medical — all after Charleoi made the decision to sell the striker, who’d scored 11 goals in 19 games in Belgium’s Pro League during the 2021-22 season straight away to Watford.

It’s not the first time Charleroi have done this. It’s effectively their business model and ultimately the hope at every club that can’t write blank cheques: buy cheap, sell high. It’s just that some clubs might try and style it out a little more subtly.

Back in 2019, Charleroi pulled off virtually the same manoeuvre with Nigerian striker Victor Osimhen. They took him on loan initially from Wolfsburg, activated an option in the region of £3 million, then sold him to Lille straight away for £12 million. It’s understood they included a sell-on clause which meant they were paid when he then went on to sign for Napoli in 2020 for a reported fee of €71.3 million plus add-ons.

Watford fans will also remember the profit made on Dodi Lukebakio, who followed the same path at Bayo. Charleroi took him on a year’s loan from Anderlecht in 2017, exercised their option to buy, and he was then sold to Watford halfway through the season. He played 15 minutes for Watford against West Ham in February 2018, was then sent on loan to Fortuna Dusseldorf in the summer, and by 2019, was sold to Hertha Berlin for a fee in the region of £20 million. Watford had signed him from Charleroi for approximately £3.5 million and made £16.5 million profit. 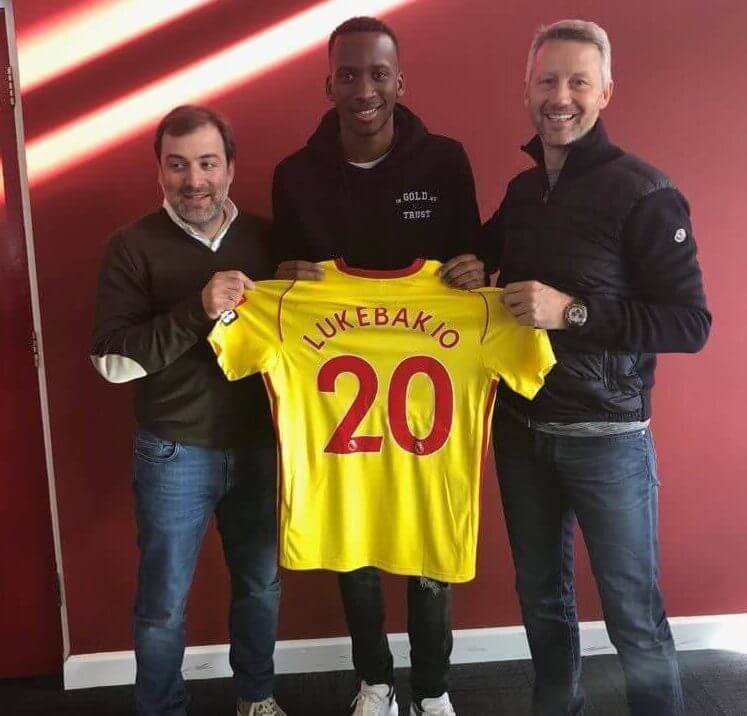 In Charleroi’s statement when they announced the permanent signing of Bayo, they said he’s become an “essential element” of their attack — yet not so essential that they were unprepared to move him on immediately.

Watford’s view was that Bayo fitted the profile of striker that head coach Edwards was looking for and once again, agent Bayat, who also has strong ties at French club Nantes, from where Watford signed Imran Louza last year, was able to deliver that player. The club felt the 25-year-old striker may be more suitable to the physicality of Championship football than the departed Cucho Hernandez.

“Rob was clear he wanted a different type of player who will occupy this non-homegrown place in the forward line,” explained Cristiano Giaretta as he outlined the club’s determination to not exceed their foreign player quota to ensure squad harmony. EFL rules stipulate you’re not allowed more than 11 non-homegrown players in any match-day 18.

The financial figures involved in the Cucho/Bayo situation are also a significant sub-plot to that. It was considered the best time to sell the Colombian to MLS side Columbus Crew for a fee understood to be in the region of £12 million. Bringing in Bayo for a fee less than half of that, approximately £5 million, appears sensible if he’s able to help Watford’s overall offering more.

Benik Afobe was a transfer target with a direct link to Edwards as they’d worked together at Wolves but he chose an alternative offer from Club Bruges where he’ll play Champions League football. Losing out on Afobe has switched Watford’s attention to other targets, which include Swansea’s Joel Piroe. It’s understood initial exploratory discussions have taken place over a deal for the 22-year-old Dutchman. Watford also hold an interest in Aston Villa’s Cameron Archer, as explained here.

Bayat brokered the deal that brought Emmanuel Dennis from Bruges to Watford for a fee in the region of £3 million last summer and the Nigerian is likely to leave for around £20 million. Bayat is known to have held discussions with at least one club regarding an onward path for Ismaila Sarr, which is less driven by pure profit and simply trying to get a fee as close to what Watford bought him for from Rennes at £28 million in 2019.

Earlier this month, Watford CEO/Chairman Scott Duxbury said that Bayat “doesn’t have exclusivity” to do deals for the club.

“There are many, many other players we have signed that he wasn’t involved in,” Duxbury told the Watford Observer. “But it’s natural that Gino (Pozzo) will build relationships with agents who deliver good players.”

So what sort of player are Watford getting in Bayo to try and replace some of those that are on their way out? Eight of his eleven goals last season, all for Charleroi, were scored within the width of the six-yard box inside the area. Two weren’t far from that, just out to the left-hand side of the pitch, along with one a long-distance effort. 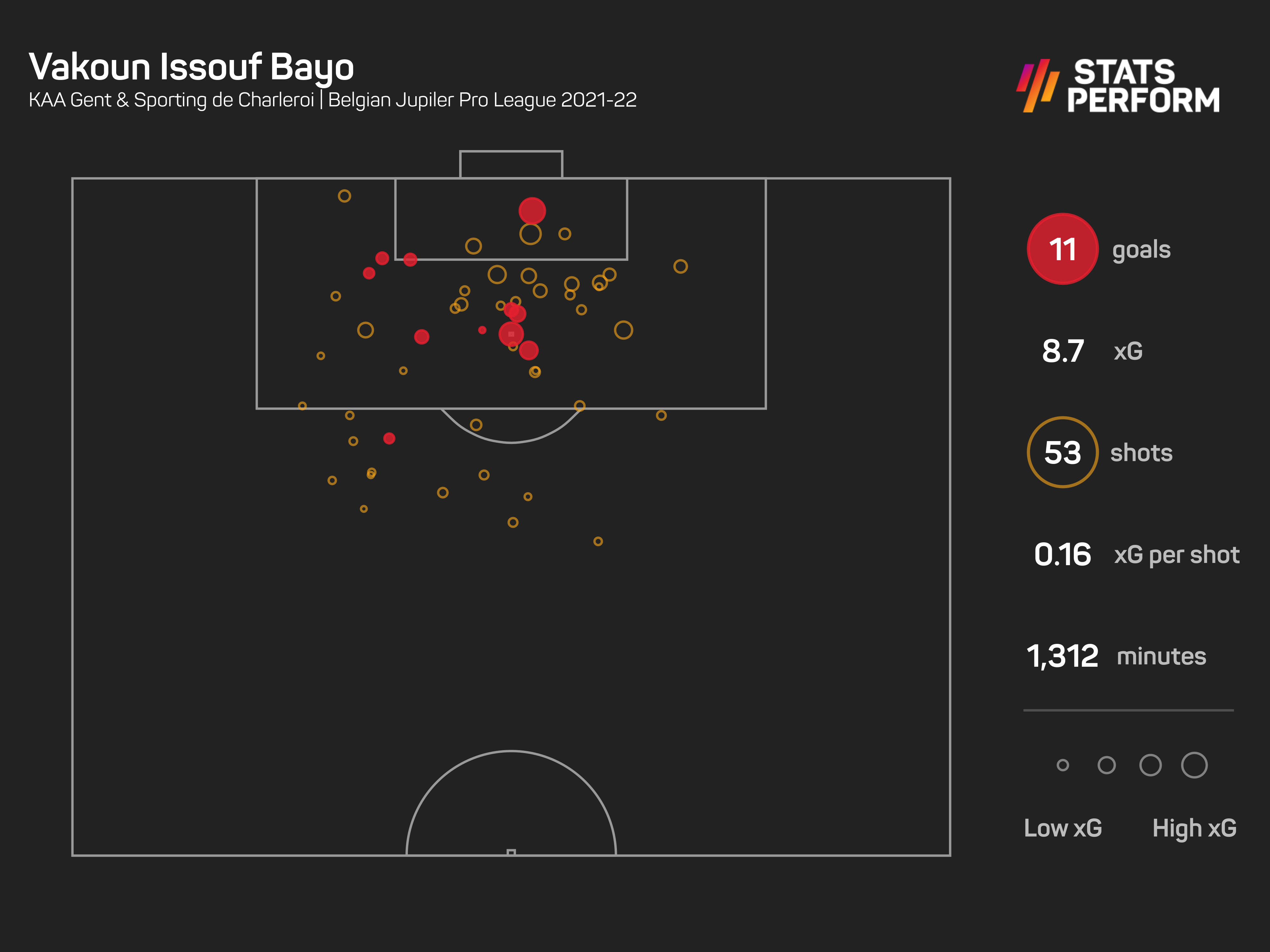 Watford appear to have acquired an in-form poacher, who has an aerial threat as he stands 6ft tall. He scored twice in a game four times last season within the space of seven matches and outperformed his expected goals (xG) by 2.3 (11 goals from an xG of 8.7), which comes down slightly to 2.1 (10 goals from 7.91) when you include the penalty he scored in a 2-2 draw at Mechelen.

Either way, Bayo made an impact which often exceeded expectations last season. He ranked fourth in the Belgian Pro League for minutes-per-goal among players to have scored at least five, averaging one every 119 minutes, behind Bas Dost (93, Club Bruges), Shamar Nicholson (103, who left Charleroi mid-season to join Spartak Moscow) and Sargis Adamyan (118, also Club Bruges).

Bayo’s previous experience in British football at Celtic didn’t go to plan. He signed from Slovakian side Dunajska Streda in January 2019 for £2 million after another rich run of form (18 goals in 23 games), and after making his debut for Ivory Coast (he now has two caps).

The club’s new No 10 was introduced to the crowd at half-time of the game that month against St Mirren but only made a brief cameo appearance away at Kilmarnock before the end of the season due to a serious hamstring injury that ruled him out for the rest of the season.

Under new manager Neil Lennon (who succeeded Brendan Rodgers), he started the following pre-season with some bright glimpses, including a well-taken half volley against Austria’s Wiener SC, before suffering a hamstring injury. In a 3-1 win over Hearts, he did show his worth. Although both of his strikes were credited as own goals, he lived up to the expectations placed on him that afternoon at Celtic Park.

The Athletic’s Kieran Devlin wrote at the time: “The initial impression of him as a conventional target man, though reductive, also rang slightly true, with his hold-up play and aerial battling proving hugely problematic for the Hearts centre-halves.”

“His defensive work was especially impressive. Not only did he press well but he tracked back habitually, spearheaded the defensive block during Hearts’ infrequent spells of possession, and was imperious in clearing set-pieces – often heading the ball far into the pitch’s middle third. That intensity and composure from a defensive striker could be invaluable.”

He received a standing ovation that day but competing against Odsonne Edouard and Leigh Griffiths, he only played 13 more games and scored two goals, also picking up a red card for two yellows in a Europa League tie against Rennes, who’d just sold Sarr to Watford. Allowed to go on loan to Toulouse in August 2022, he scored eight goals in 24 appearances but the French club didn’t take up the option they had to sign him before Gent seized the opportunity and he went onwards to Charleroi.

Now it’s time for the Watford chapter in his story.

The Fisherman’s Hut: inside the luxury Russian dacha linked to Vladimir Putin

Monaco in talks over loan move for Leicester’s Boubakary Soumare