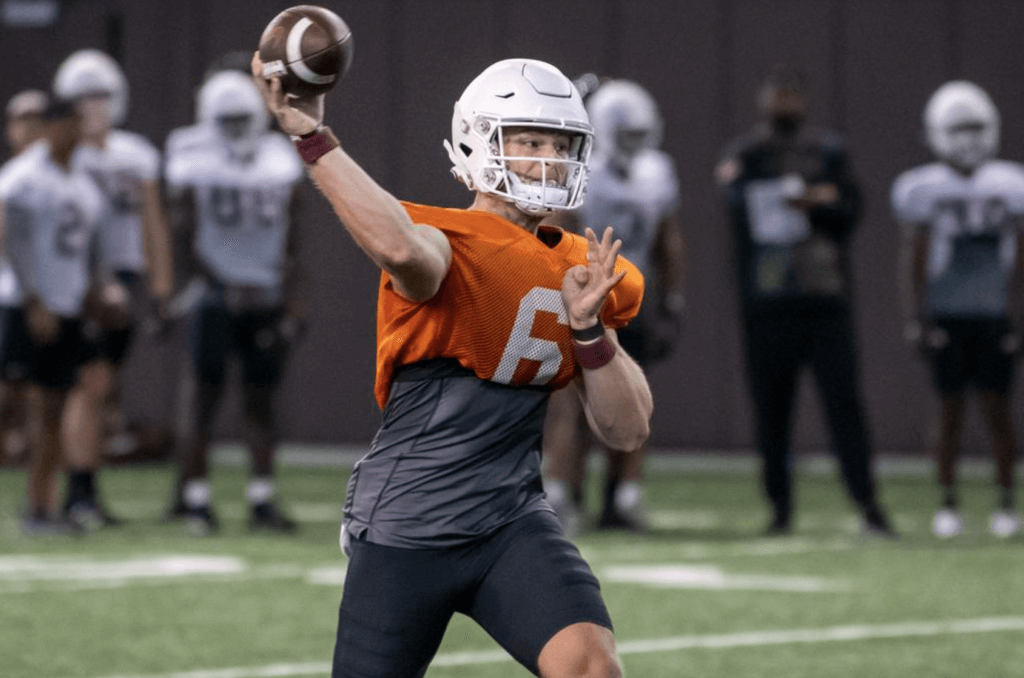 BLACKSBURG, Va. — Grant Wells has won a battle between transfers to be Virginia Tech’s starting quarterback. Head coach Brent Pry announced Wednesday night what had been assumed since the end of spring practice: Wells, who transferred to Virginia Tech from Marshall in the winter, will be the Hokies’ starting quarterback when they open the season Sept. 2 at Old Dominion. He beat out South Carolina transfer Jason Brown.

Pry also said that Malachi Thomas, the favorite to start at running back, is “week-to-week” with an injury. Thomas rushed 93 times for 440 yards and three touchdowns as a freshman last season.

WR Dallan Wright has had a season-ending injury, Pry says.

RB Malachi Thomas suffered an injury and is “week-by-week.”

Wells, a redshirt junior from Charleston, West Virginia, started two seasons at Marshall, throwing for 5,623 yards and 34 touchdowns with 23 interceptions and earning first-team All-Conference USA honors as a freshman in 2020. He threw for 3,532 yards last year as a sophomore, and his average of 270.9 passing yards per game ranks fifth of the ACC’s returning quarterbacks this season. He has eight 300-yard passing games in his career.

The 6-foot-2, 208-pounder was the frontrunner for the job coming out of spring ball, which he capped with an 11-for-21 for 178-yard effort in the spring game, with two long touchdowns to Kaleb Smith.

Brown, a redshirt senior from Fredericksburg who joined the Hokies from South Carolina after previously playing for FCS Saint Francis (Pa.), will be Wells’ backup. He began last year as the Gamecocks’ third-team quarterback but started the final four games of the regular season, guiding them to wins against Auburn and Florida and finishing with 721 passing yards, eight touchdowns and six interceptions.