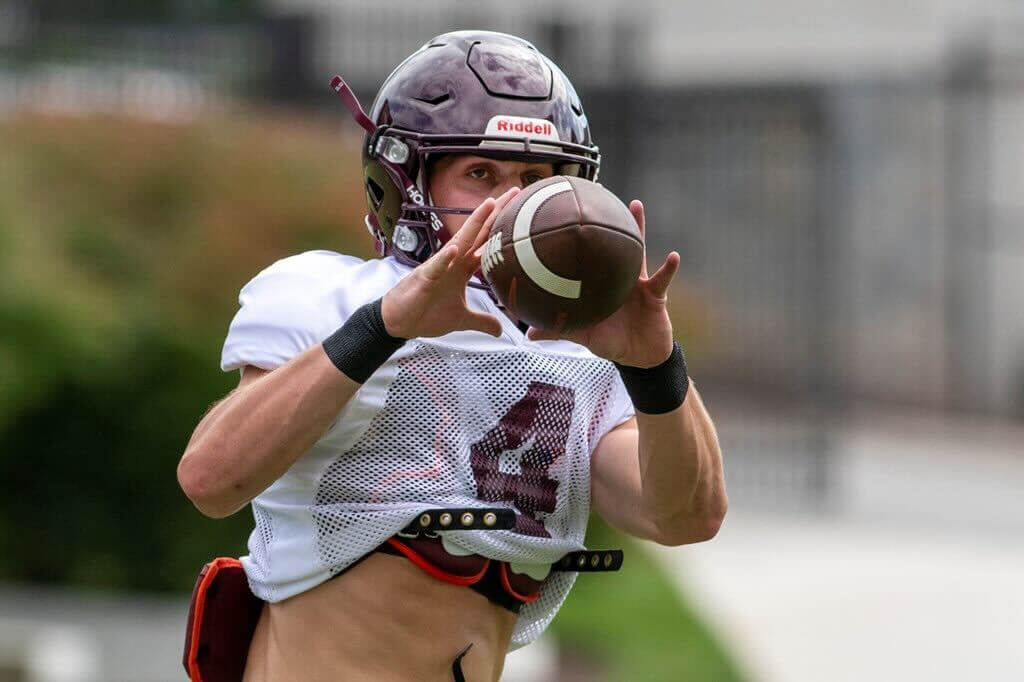 BLACKSBURG, Va. — Connor Blumrick knew instantly he’d made the cardinal sin of a pass-catcher, turning upfield before securing the ball during a passing drill at Virginia Tech’s practice Friday.

As the ball fell to the ground, he clapped his hands, walked over to the back of the line and went again, this time bringing the pass all the way in before turning and plowing his way through two defenders holding blocking pads to finish the drill.

This is the former quarterback’s role now: sometimes a tight end, sometimes a receiver, sometimes a running back — shoot, sometimes a quarterback still, at least according to the coaches in the spring — and the sixth-year senior is enjoying taking on this new challenge since making the position switch last winter.

“I just trusted my coaches and I’m going with it,” Blumrick said, sporting a black-and-orange “Hokies vs. All Y’all” sweatshirt after Friday’s practice.

It’s unclear exactly how much use Blumrick will get in his new role, but it’s one the Hokies thought was worth a shot once they went with transfers Grant Wells and Jason Brown as the top two quarterbacks last winter.

Blumrick’s dabbled with a slash role before, working some as an H-back when Kellen Mond was entrenched as Texas A&M’s quarterback at his previous stop. This feels more involved, though. The Hokies’ staff loves Blumrick’s athleticism, which helped him rush for 242 yards and three touchdowns last year as a running quarterback.

What they’re asking him to do now is a bit more far-reaching.

“He’s got a unique skill set,” offensive coordinator Tyler Bowen said. “He’s played receiver before. Obviously he’s played a lot of quarterback over his career. So it’s been fun to figure out how to utilize him and package him in in different personnel groupings.”

Blumrick has added some size in anticipation of more blocking duties. He’s officially listed at 222 pounds this August, up seven from last fall. He’s still found blocking the most challenging of his new roles, particularly when the defender is linebacker Dax Hollifield, who has a good 20 pounds on him.

Blumrick thinks quarterbacks have the best hands on the team to begin with, so he doesn’t think the catching part of his new gig will be too big of a hurdle. To that point, after his drop earlier in practice, he made a nice toe-tap of a catch on a high ball near the sideline against air in a different drill.

With Nick Gallo and Drake De Iuliis as veteran tight ends likely to get the most snaps, Tech shouldn’t have to ask Blumrick to have to do too much, which could lead to a niche role. Whatever it is, he’s up for it.

“I want to be in as many plays as coach will put me in,” Blumrick said. “I want to be involved in the run game and pass game, whatever I can do to help the team.”

Here are a few notes, quotes and observations from the Hokies’ fourth August practice:

• Tech finished up its first four-practice block and will have a day off Saturday before getting back on the field Sunday, presumably in pads. The Hokies have been in shells the past two days (helmets and shoulder pads), but Bowen thinks that still allows for a significant amount of physicality.

“When we’re in uppers, that’s pretty much full-tilt boogie as well,” Bowen said.

“Been up and down,” he said. “We’ve got to create some consistency right now on offense, but I’ve been appreciative of how the guys have worked. … Just (inconsistency) across the board. Just little things that we can control. Just discipline things. It all starts to me with not beating yourself, and we’ve had some of those errors early on here. Not overall. But we’ve got to clean up those things.”

• Here were some personnel groupings the Hokies had during a hurry-up drill at the start of practice:

Tech utilized the two veteran tight ends, Gallo and De Iuliis, in a number of ways with that first group, playing them in the slot or even out wide in a bunch set with Smith, suggesting you’ll see them in various roles next month.

“I think they’re pretty good all-around guys,” said Bowen, who coaches tight ends in addition to his coordinator duties. “I think you can utilize them in a variety of ways, deploy different formations, so that’s been fun to play around with here over the spring and over the summer of fall camp.”

• The quarterback order has been pretty much the same in the two practice sessions media has seen so far, with Wells first, Brown second, some combination of Farrell and Tahj Bullock next and walk-on Ben Locklear last.

Bowen said Tech has “got a good battle going on right now,” not giving a timeline for naming a starter, even though quarterbacks coach Brad Glenn said in June that Wells is likely the guy.

• For what it’s worth, this was the running back order during one mesh point drill Friday: Holston, King, Thomas, Chance Black, Bryce Duke and Kenji Christian.

King has worked some at receiver, with coaches thinking it could be a way to utilize his speed. Bowen said the top two backs are probably Thomas and Holston right now.

• Thomas said he’s up around 203 pounds after coming in at 190 last summer as a true freshman and playing most of last year at 197.

It was still enough for him to rush for 440 yards, with 324 of that coming in a mid-year breakout stretch against Syracuse, Georgia Tech and Boston College, but that workload (59 carries in three weeks) took a toll on him.

“I notice you’ve kind of got to have size up here in the big leagues,” Thomas said. “Because you’ve just got to take care of your body. And I’ve got to be able to take on some tough hits. I can feel a difference. Whenever I take contact, I notice I’m able to stand up and not go down as easily.”

• Virginia Tech partially updated its heights and weights, though the accuracy of those numbers remains very much in doubt, particularly during an August session when weights can fluctuate daily.

A player who is noticeably bigger, especially compared to his lean spring self, is Keli Lawson, who moved from receiver to sam linebacker and went from 200 to 212 pounds. More interestingly, the Hokies are acknowledging his actual height, bumping him up from 6-foot-4 to 6-foot-6 (which seems accurate). Receiver Kaleb Smith also added two inches to his officially listed height, going from 6-2 to 6-4.

Among the biggest gainers? Center Jack Hollifield added 29 pounds to go from 271 to 300, an expected bump considering he made the move from tight end to offensive line shortly after arriving at Tech in 2021.

Defensive tackle Wilfried Pene went from 253 to 286, a 33-pound increase. Last year was his first on the defensive line after he arrived as a tight end. Defensive end CJ McCray added 16 pounds, going from 221 to 237, an important addition after arriving at Tech from Marshall as an outside linebacker and moving down into the trenches last fall.

Looking for a quick-gainer? Freshman tight end Dae’Quan Wright arrived in the low 210s this summer but is up to 231, Bowen said.

• Sam linebacker Keonta Jenkins continues to get attaboys from the coaches during practice. In a recognition drill, where coaches wanted two defenders to react to a runner and stand him up without going overboard with contact, Jenkins reacted quickly and gave a defender a good pop under the shoulder pads, drawing an energetic response from coaches and teammates watching.

They kicked us out right before inside run and WR-vs.-DB drills. You know, the interesting stuff. #Hokies pic.twitter.com/TLvRU0Rw7z

• Rain came into the area right toward the end of the media viewing sessions Friday, forcing all of Virginia Tech’s players into the indoor facility for a stretch of practice. Practice picked up pretty quickly after the adjustment.

As the media was being escorted out of the building following the end of Period 6, the next workout period was announced over the speakers: inside run and wide receiver vs. defensive back one-on-ones. So the most interesting part of practice is still just out of reach to us reporters.

Florida’s Nay’Quan Wright is back, ready for larger role in Gators’ backfield