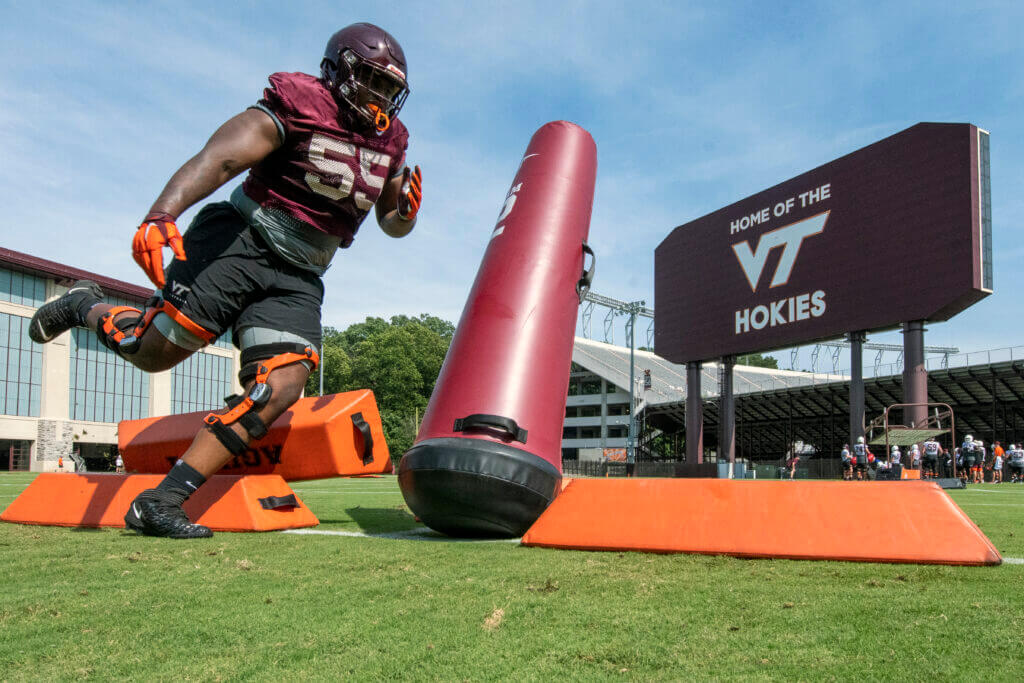 This was the defensive position group he’d coached forever in his assistant days, so old habits and an energetic streak took over. He dished out critiques both ways but showed some extra bravado when a linebacker knocked a pass away for an incompletion.

“Go back to the drawing board with that one!” he yelled, his distinct Southern drawl unmistakable. “You telegraphed that! That was EASY!”

The hope in Pry’s first camp is that the Hokies emulate that energy. Pry was a little disappointed in Day 1 on Tuesday but thought things looked better on the second go ’round.

“Two days in and a roller coaster,” Pry said. “A lot of things (Tuesday) that weren’t good enough, that were disappointing a little bit, and the entire team, particularly the defense, battled back today and had a good day. But I just talked to the guys, there’s adversity in Day 1 for certain guys and certain units, there’s adversity in Day 2. That’s what camp’s all about. And they’ve got to keep preparing and keep working through the adversity for the improvement.”

Pry didn’t see on Day 1 the competitive nature he thought the team fostered in the spring, allowing catches to be made without a challenge — “Just the will and determination to win the rep.”

That’s a focus early in camp, particularly in the first two days, before the team is allowed to wear pads. Pry liked the retention he saw from the work the Hokies did in the spring and summer, particularly on offense, where he thought the quarterbacks were in tune with the receivers and threw the ball well.

But it’s the mentality that’s important to establish in the early going.

“I think seeing competitive days like today,” Pry said. “Competitive periods. The defense really got after them in the first skel, and I was so glad to see the offense battle back in the second skel. Those are things I’m looking for — and individual growth and development. Guys you hope are taking that next step and can factor in for you. You want those guys to emerge in Week 1 so you can start getting the reps that are necessary.”

Here are a few notes and observations from the Hokies’ second spring practice:

• Tech is practicing in the late afternoon/early evening for the duration of camp, a departure from the morning practices the Hokies did late in the Justin Fuente era. That decision was made purposefully.

• Looking for a key player to watch on defense? Pry has repeatedly brought up Keonta Jenkins, who moved from safety to sam linebacker in the spring and has continued to impress in the hybrid position.

“He’s a long guy,” Pry said. “Really good speed. Particularly when you move him from safety to linebacker, he’s got a lot of DB qualities. And he’s learning the linebacker traits that are going to be necessary, but the spot he’s playing for us is kind of a hybrid. He’s got to have both sets in his toolbox. He’s a guy I’m most excited about as far as position changes.”

Jenkins also switched numbers, going from 33 to a much more revered number at Virginia Tech: No. 7.

• Another youngster who appears to be pushing for time is linebacker Jaden Keller, a redshirt freshman who worked at the will linebacker spot with presumed starter Alan Tisdale. Given the way Pry’s talked about Keller, that might not be so automatic.

“Right now he’s certainly in competition for the will linebacker spot,” Pry said. “He’s a beautiful-looking young man. He’s really had a great summer just changing his body, looking lean and fast. He plays, when he knows what he’s doing, he plays as fast as anybody on the defense. He’s got a real shot.”

• Pry liked how the receivers have handled themselves in the early going, particularly with creating separation. They had a strong showing in 1-on-1s with the defensive backs Wednesday.

“I think they have made strides,” Pry said. “I think coach (Fontel) Mines has done a great job. There’s talent in that unit. They’ve just got to start checking boxes in areas that they’ve got to get better at. There’s talent, and I do think they’re improving. That group needs to have a great camp.”

• The offensive line got some reinforcements when the freshman class arrived fully this summer, replenishing the ranks and giving coach Joe Rudolph a few more options. Here’s how they lined up for one full-offense drill Wednesday, from left to right:

Freshman Johnny Dickson also worked out at center, making it five freshmen (Dickson, Braelin Moore, Garrett, Chaplin and Meadows) who are at least getting a look in the early going.

“I think those young guys do bring some depth,” Pry said, “and as they continue to grow and develop, maybe it’s not for the beginning of the season, but maybe it’s Week 4 or Week 6 when all of a sudden you need somebody. And if they keep growing and developing, they’ve got a chance.”

• The freshman class has some beef. Chaplin (6-foot-6, 355 pounds), Lemar Law (6-5, 280) and Malachi Madison (6-3, 310) look every bit of their listed height and weight. Size, at least, won’t be a disqualifier for them seeing the field this year, as it is for many freshmen linemen, though Pry said there are lots more considerations than that.

• Pry said the Hokies still have one scholarship they can play with under the 85 limit. There are two internal candidates for it and two from outside the program Tech is still pursuing. Pry thinks that’ll play out sometime in the next week.

“It’s a daily discussion,” he said.

• If you happen to walk by or into the Hokies’ locker room, you might notice something different: It’s brighter. Tech slapped on a fresh coat of white paint and put in brighter lights in the hallway by the locker room and inside, turning what was previously a pretty drab corridor into an area that’s more vibrant.

That was intentional. Pry and chief of staff Mike Hazel pushed for it after getting feedback from Virginia Tech that the much-anticipated locker room renovation could be done in either 2023 and ’24. It was a relatively cheap fix that they thought could make a difference. The athletic department obliged.

“When you walk into a room you get a feel, those guys are in there all the time,” Pry said. “Maybe at one time, it felt like new and it was great, but for us now, we just felt like it needed a change. …

“Right now, I feel a ton of support. When we have concerns they are always addressed and talked about, it never falls on deaf ears. They want to see us do this as much as we do.”