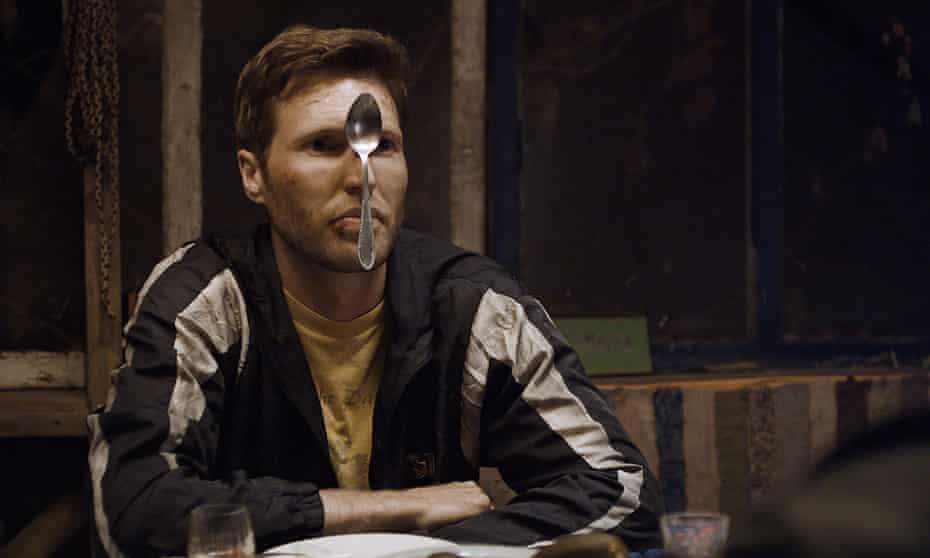 “That’s our wandering buoy. It slipped its anchor near the dam. It appears and disappears at will.” A light, unfathomable absurdity governs this 2018 fiction debut by Ukrainian documentarian Roman Bondarchuk, set in the area around the city of Kherson; a sun-roasted steppe north of the Crimea where Organisation for Security and Cooperation in Europe (OSCE) interpreter Lukas (Serhiy Stepansky) becomes stranded. He’s escorting an SUV full of foreign delegates when it breaks down and he wanders off in search of a mobile signal. On his return, both car and foreigners have vanished.

Hitching a ride, Lukas is invited to stay with Vova (Viktor Zhdanov), a middle-aged potterer living with his mother and daughter in a capacious ramshackle construction on the banks of the Dnieper river. So begins Lukas’s initiation – like a milder Ukrainian version of Wake in Fright – into the local anomie. Vova enjoys sticking spoons to his forehead using the supply of glue that was his severance payment from the Soviet fish farm he worked for; then Lukas gets an invite to a listless student party where someone nicks his jacket and wallet. Constantly slipping sly details into the frame, Bondarchuk handles the whole farrago with a lovely deadpan poise. Incensed by the theft, Lukas heads to the police station to make a complaint. Cut to him in the cells.

This heap of eccentricity makes Volcano an oblique cousin of the vitriolic satire of Sergei Loznitsa’s 2018 film Donbass. Taking place in a weird demilitarised zone between the present conflict and a deeper Soviet hinterland, Lukas’s adventure feels post-historical, post-democratic and – with everyone comically flailing for their bearings on this disorientating new frontier – almost post-ironic. Perhaps in its second half, Bondarchuk lets the drama get a little directionless, and the direction he does pick – Lukas’s fling with Vova’s daughter Murushka (Khrystyna Deylyk) – is a bit obvious. But combining roving vérité-style long takes with grand compositions such as the opening overhead cargo-ship shot, Bondarchuk is able to both immerse and surreally startle en route.

Volcano is released in cinemas on 12 November.

If Biden doesn’t pass the climate bill, it will be the betrayal of a generation

Cardinals top prospects Nolan Gorman and Matthew Liberatore have arrived. Why ‘it was time’