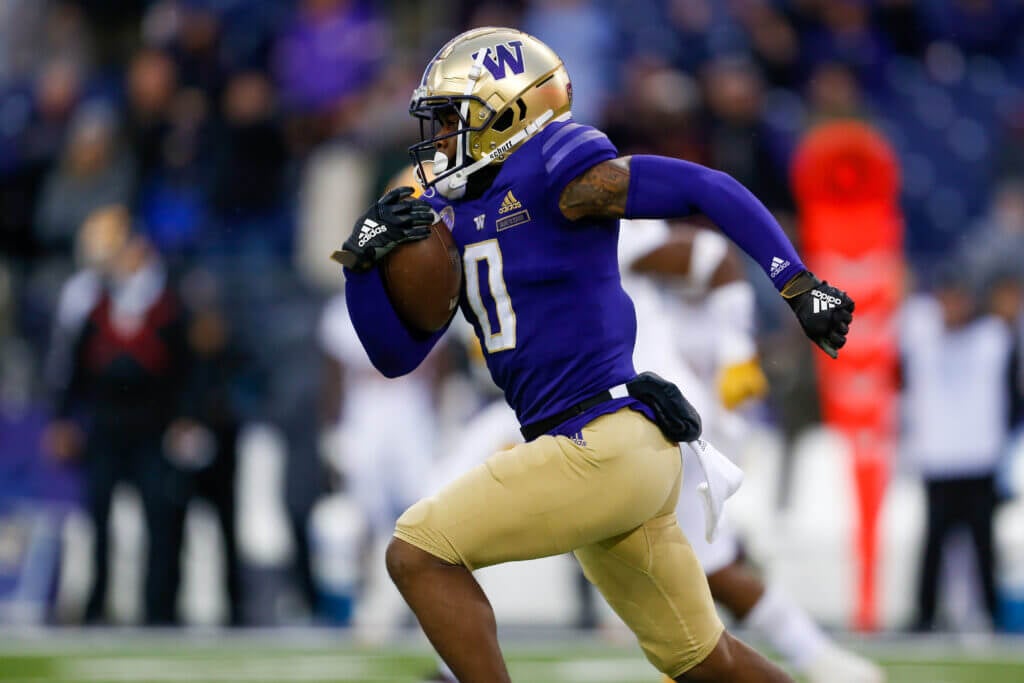 SEATTLE — If you happened upon Washington’s first preseason football practice at the right time, you could have believed the Huskies have only two quarterbacks.

Was this a reflection of what to expect come September? Is it already a two-man race? May we derive conclusions from this snippet of early-August practice data?

Nope, coach Kalen DeBoer said. The plan still is to give all three passers a fair shake. Expect a different script Friday and each day after, until Washington’s first camp scrimmage next Saturday (Aug. 13).

“We’ll change up the reps day to day over the first week, and closer to the first scrimmage we’ll see who will go with the 1s in the scrimmage, then we’ll reassess,” DeBoer said. “There’s going to be a day off after the first scrimmage, then we’ll keep going from there. I know everyone wants to know timeline and things like that. We would love to make a decision as soon as possible. But we also want to make sure we’re giving each guy the proper number of reps.”

There are four or five days of heavy install, DeBoer said, and he wants to give Penix, Morris and Huard each a chance to take reps with the No. 1 offense on one of those days.

“We’ll definitely keep rotating the guys,” DeBoer said. “Today we kind of went one route, and tomorrow we’ll transition to another. There will be a little bit of playing it by ear as we get into the end of the first and into the second week.”

Still, the Day 1 delineation did little to quell the notion that Penix and Morris remain out in front after separating themselves during the spring. Penix, the fifth-year transfer from Indiana, began his preseason camp with a couple of highlight throws, including a 45-yard touchdown to Ja’Lynn Polk amid tight coverage from cornerback Mishael Powell, and a deep ball up the right side to Rome Odunze that he fit between safeties Alex Cook and Asa Turner. Morris threw the day’s only two interceptions, at least inside the stadium. Second-string cornerback Davon Banks snagged one during a team period on a deep ball Morris underthrew to Jabez Tinae, and freshman safety Tristan Dunn grabbed one on a short pass during 1-on-1s.

Huard did return to the stadium for the final 11-on-11 period, taking some reps behind the No. 1 offensive line, though against the No. 3 defense. He completed a nice ball to Lonyatta “Junior” Alexander, and Giles Jackson made an outstanding catch of another Huard pass against the left sideline.

Just don’t expect them to take it much past Aug. 20 or so.

“I think the last two weeks are key (to) that quarterback getting into the feel,” DeBoer said. “They’ve all been in that moment where they’ve been the starter. Now they’ve got the reins of the team, kind of fitting back into that mold of being a leader and the juice that you bring being the starting quarterback. That’s the No. 1 thing, and then obviously the reps. But I think the last two weeks, that’s kind of what I’ve always felt.”

Here’s what else you should know about Washington’s preseason camp opener.

With sixth-year senior Jaxson Kirkland approved to return for his final year of eligibility, there was some question as to where Fautanu, who practiced at left tackle all spring, would play on the line.

The answer, at least after one day: left guard, right next to Kirkland. Corey Luciano was at center, Henry Bainivalu was at left guard and third-year freshman Roger Rosengarten was at right tackle. The right side, in particular, looks different than in the spring, when Bainivalu was limited by injury and Matteo Mele often took the No. 1 reps at right tackle.

Geirean Hatchett, who has practiced at both center and guard, also took some first-team reps at right guard in Bainivalu’s place. Victor Curne, who started every game at right tackle the past two seasons, manned that spot with the No. 2 O-line, which also consisted of left tackle Julius Buelow, left guard Nate Kalepo, Mele at center and Hatchett at right guard.

A move on the D-line

The Huskies didn’t move Ulumoo Ale from offensive guard to defensive tackle just for him to stand on the sideline, apparently. Ale was the No. 1 nose tackle when the first-team defense took the field Thursday, and it’s obvious coaches are trying to bring the 6-foot-6, 340-pound junior along quickly.

“We’re just really pushing him out there and helping him try to reach his ceiling as fast as possible,” DeBoer said. “His growth I think is supported by how hard he has really pursued this. It wasn’t just a test the waters thing. When this decision was made to move him over, he was all in from the beginning. He’s been rewarded because he deserves it. We put him out there with the 1s quite a bit today. If he can keep that growth happening, he can be a difference maker.”

Ale lined up alongside Tuli Letuligasenoa with the No. 1 defense while Voi Tunuufi and Kuao Peihopa worked with the 2s. Faatui Tuitele, sidelined during the spring while wearing a boot and using a scooter, appears to be available and should also figure into the rotation as camp progresses.

And he stepped right into the second-team defense at linebacker, another sixth-year transfer now at the Huskies’ disposal. He took snaps alongside Carson Bruener while Cam Bright and Alphonzo Tuputala ran with the 1s. Can Tuputala hold off Bruener and Moll over the next month? The coaches love him.

The impressive catch near the sideline wasn’t Jackson’s only contribution Thursday, as DeBoer singled him out unprompted as a practice standout. The former Michigan transfer also excelled in the spring and appears in line for regular duty this season. He also was one of five players I spotted catching punts, along with Nebraska transfer Will Nixon, Jalen McMillan, Julius Irvin and walk-on receiver Brennan Holmes.

Another transfer, Wayne Taulapapa from Virginia, took the very first reps at running back with the No. 1 offense, and Nixon was the next player on the field. Cam Davis also mixed in after sitting out the spring due to injury (Richard Newton was present but wearing a yellow no-contact jersey, easing into things as he practices for the first time since October). New Mexico transfer Aaron Dumas was present and suited up, but I didn’t see him take any reps. Sam Adams II carried the ball some. Jay’Veon Sunday was present, but not sure I saw him get any carries with the 1s or 2s.

“I think we’ve upgraded a lot there,” DeBoer said. “It’s obviously going to be a very competitive group because there’s a lot of guys that want to step on the field.”

DeBoer said he thinks you can play as many as three running backs consistently, but acknowledged it’s “easiest when it’s two.”

Nothing has changed since the spring: Turner and Cook still are the starting safeties, with Dom Hampton at the “husky” spot (and now listed at 6-3 and 221 pounds) and Powell and Jordan Perryman at cornerback. The second team looked familiar, too, with Irvin and Cam Williams at safety, Kam Fabiculanan at husky and Banks and Elijah Jackson the cornerbacks.

Hampton made a nice play early, bursting through unblocked to pop McMillan on a quick pass in the flat. Also, one note on the long Penix-to-Odunze completion: In a live setting, Turner would have had a clean angle on a big hit from his safety position to potentially break up the pass. Those are the kind of plays the Huskies need him to make once the pads come on.

Jeremiah Martin and Bralen Trice continue to take the No. 1 reps at the edge positions, with Zion Tupuola-Fetui still repping mostly with the No. 2s. DeBoer has been clear he sees those players as a clear-cut trio heading up that position, but we’ll see which two end up playing the most come September. Martin had a “sack” on the first series Thursday.

He’s said it before, but DeBoer reiterated that he thinks the Huskies are better stocked at edge than he might have originally assumed.

• Again, don’t count on linebacker Edefuan Ulofoshio returning before late October or so. DeBoer repeated that Ulofoshio will miss “half or more” of the season.

• Ulofoshio was present, at least, as he was throughout the spring, watching and helping from the sideline. Only two other scholarship players were sidelined by injury: linebacker Demario King and defensive lineman Armon Parker.

• Former linebacker Keishawn Bierria attended practice and addressed the team afterward. DeBoer emphasized that alumni are always welcome around the players, any time of year.

• DeBoer is scheduled to throw out the ceremonial first pitch prior to Monday’s Seattle Mariners game. Will he climb the mound and throw from the rubber? “We’ve got to go all the way to the top — there’s only one way, right?” he said. “I’ve thrown out a couple and we’ve always gone to the top.”