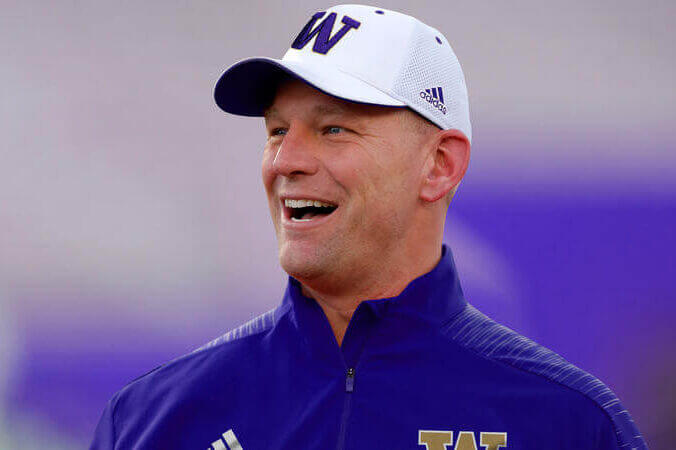 SEATTLE — Don’t look now — or do, it’s honestly fine — but there are more August days behind us than in front of us, and Washington’s opener against Kent State is fewer than three weeks away. The Huskies closed practices to the press after their first six (plus a seventh, on picture day, that was open to the public), so we won’t see them in action again until they begin the Kalen DeBoer era on Sept. 3.

Here are five things I learned from watching the final few open practices and talking with players and coaches the past week.

Washington scrimmaged behind closed doors on Saturday, though DeBoer said the coaches continued to divide reps evenly between Michael Penix Jr., Dylan Morris and Sam Huard. “Everything that you guys have seen, it’s been the same, rotation, equal reps across the board all day and all week,” he said.

Will they try to keep the starter’s identity secret through game week, a la Jimmy Lake in 2020 (Morris) and Chris Petersen in 2015 (Jake Browning)? Not likely. Expect an announcement at some point, perhaps next week, after Washington’s second scrimmage on Saturday, though DeBoer certainly left himself some wiggle room.

“I think we’ll just roll with it,” he said. “You could say there’s a competitive advantage (to not making an announcement), but I don’t even like the distraction. In my mind, we’ll probably release it at the right time.”

The number of repetitions might be equal, but DeBoer said Saturday’s scrimmage was a chance for offensive coordinator Ryan Grubb to tailor his calls to whichever quarterback was in the game.

“Now you’re just trying to do certain things to their strengths and seeing how that works,” DeBoer said. “Now it isn’t a scripted deal. He’s calling the offense now for what he would do with that guy to see how he responds and what type of production we get out of the quarterback and that unit when they’re on the field. This will be a good stepping stone from a scrimmage standpoint to evaluate that.”

My money still would be on Penix, though the current lack of resolution suggests there hasn’t been significant separation. Huard made a couple of nice plays during the open scrimmage on picture day. The one that stood out most to me: He evaded a blitzing Dom Hampton and completed a long pass up the sideline to Jalen McMillan after flushing left. Not sure we’ve seen him make a play quite like that yet. You can see Huard’s growth from last spring and fall, but Morris looks sharper, too, and Penix has been about what you probably thought he would be — which I’m still assuming will be enough to make him the guy.

Jordan Perryman could be ‘next’

If the new coaching staff were to pick MVPs for training camp, Perryman, a sixth-year transfer from UC Davis, would be a strong consideration on the defensive side. Co-defensive coordinator Chuck Morrell raves about his strength and speed as a veteran player, and Perryman puts both to use as a physical cornerback. I’m not sure I saw a single pass easily completed against him during the open practices — if UW’s receivers caught the ball with Perryman in coverage, it was usually a pretty tough play.

Nothing about him indicates any apprehension about moving up a level from FCS — he’s as confident as they come, and he plays like it. He wasn’t a big name in the transfer portal and UW fans might not have been immediately familiar with him, but I do think Perryman has a chance to parlay a big senior season into a pro career.

A name to watch at safety

Morrell volunteered, in response to a question about safety depth, that the staff is making an effort to bring redshirt freshman Vincent Nunley along. That’s been obvious from the division of reps during the practices we witnessed, as he’s seen plenty of action with the No. 2 defense.

“Young guy, hasn’t been on the field yet, but it’s his time,” Morrell said. “He’s been in the program for a couple years, and we need to get him on the field.” Morrell also said Makell Esteen, a 2020 signee and also a redshirt freshman, is “quietly having a solid, consistent camp for us.”

Alex Cook and Asa Turner still are the likely starting duo, but there could be more competition here than one might believe, with Morrell also praising Cam Williams’ camp performance.

Morrell and co-defensive coordinator William Inge have talked about playing an attacking, aggressive style defensively, but what exactly does that mean — more importantly, what do they think it means? More blitzing? Tighter coverage?

“It’s not just live and die by the sword all the time,” Morrell said. “You’ve got to pick your spots. We just want to make sure we’re limiting explosives, attacking when we have opportunities, and playing hand-in-hand with our offense and special teams.”

Washington’s defensive coaches talk a lot about their own offense, which I find interesting. I haven’t heard Morrell use the term “complementary football,” but that’s what he’s talking about — playing in a way defensively that aligns with the way it plays offense and special teams.

“I think the biggest thing is being able to fit with our offense,” Morrell said. “I feel very confident in our offense moving the ball up and down the field. I always look at our job defensively (as) to go out there and make plays and set our offense up in great field position to score. That means we’re going to be aggressive at times.”

What kind of defensive vibe should you expect come Sept. 3? What does Morrell want observers to think of the Huskies’ defense?

“I know this is super cliche, but I want everybody in the stands, I want the officials, I want the opponents to know that we play hard,” he said. “I know every coach in America says that, but there’s a different level of recognition after the game. If people can recognize how hard we play, then I’ll be pleased.”

I asked linebacker Cam Bright the same question. What response does he want Washington’s defense to evoke? “‘Dang, them boys blitzin’ every play,’” he said, “and (when) we’re just in base calls, flying around.”

Relief on the D-line

The way Ulumoo Ale left the field last week — on a cart with his left leg in a cast or brace — suggested a serious injury, but DeBoer had a far more encouraging update on Saturday, saying Ale will only miss a couple of weeks and should be able to play against Kent State. “Very, very fortunate,” DeBoer said, recalling the scene that brought practice to a standstill.

With Ale recovering from his injury, I’d guess Kuao Peihopa continues to take reps alongside Tuli Letuligasenoa, but Voi Tunuufi is going to play a lot this season, regardless. I chatted with him for a few minutes after Tuesday’s practice, and was a little surprised when he said his offseason goal was to get bigger and stronger, considering the roster lists him 17 pounds lighter (258 now) than last season (275).

“I knew I had the speed. I knew I played different,” he said. “I think the one thing I have to do to play at the next level I want to play at, is my strength. I really focused in on that and my technique. Even with those big guys, I can use my technique and my speed to be able to overpower them.”

Getting stronger, he said, also entailed making himself “more leaner, losing fat. Our nutrition staff and our weight room and coaching staff, they do a really good job of feeding us and reducing our fat down and getting more muscle on us.”

Tunuufi tied for the team lead with three sacks last season and has been a productive player during training camp. He said he likes playing three-technique, lining up between the guard and tackle and using his speed to get into the backfield. “I’m very unorthodox. I’m not big,” he said. “I try to use what the lord has blessed me with, and the lord apparently blessed me with speed, so I use that to my advantage.

“I think I just want to be that second guy — whenever people are going down, I want to be able to be there for my brother. When the time comes and my name gets called, I’m sure I’ll be ready.”