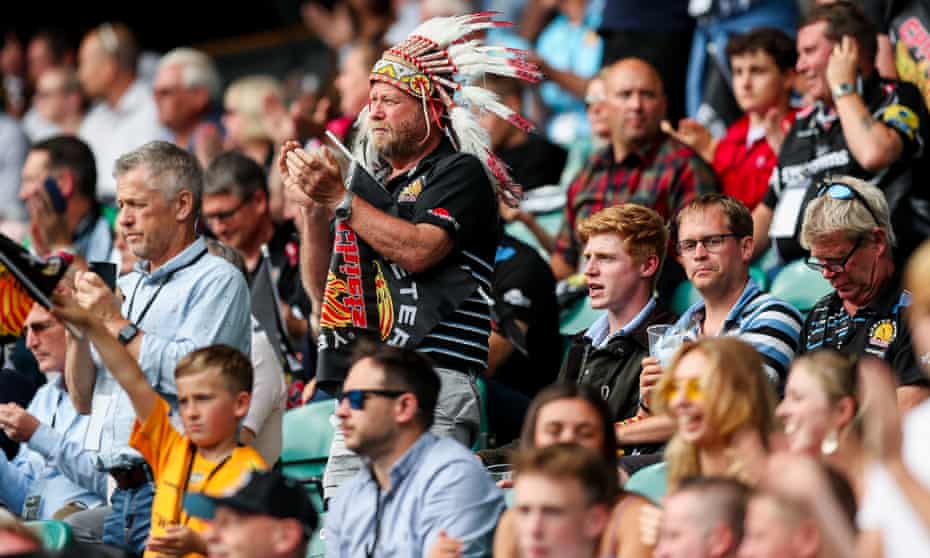 Wasps have asked Premiership Rugby and the Rugby Football Union to consider imposing a nationwide ban on the wearing of Native American headdresses by fans of Exeter Chiefs, arguing that visiting supporters who do so when the sides meet in Coventry on Saturday will potentially “cause offence”.

While Wasps have stopped short, for now, of imposing an immediate ban they have called on the authorities to “formally address” the issue across the entire league.

“Many topics and behaviours which were once tolerated, such as cultural appropriation, are no longer acceptable,” said Wasps. “Just because something isn’t offensive to you, doesn’t mean it isn’t offensive.

“Even though we do not want to create a professionally offended society, we do need to recognise that times and opinions change.”

The issue has gathered increasing attention after the decisions of some sporting organisations in the United States, such as American football’s Washington Redskins and baseball’s Cleveland Indians, to rebrand themselves.

Exeter argue their “Chiefs” moniker has been used to denote the first XVs of many local Devon clubs for more than a century but their reluctance to redesign their badge and associated branding has prompted an increasingly heated debate.

“At this current time, we will not be issuing an arena-wide ban on the wearing of faux Native American attire, as one club acting in isolation has the potential to cause further division and uncertainty,” Wasps said.

“However, we do not support the wearing of such items, discourage supporters from wearing them and will be revisiting this decision in due course.

“We at Wasps believe that cultural appropriation – the act of taking or using things from a culture that is not your own, especially without showing that you understand or respect this culture – and, therefore, the wearing of faux Native American headdresses has the potential to cause offence and doesn’t align with our values.

“Wasps want to be part of positive equality, diversity and inclusivity change, and will continue to encourage the entire rugby community to take action against inequality and other forms of discrimination. We are committed to doing more to tackle racism and to championing diversity in sport.”

Meanwhile, Sale may be forced to do without their influential Springbok Faf de Klerk for an extended period if a London specialist decides the scrum-half needs surgery on a hip flexor injury he initially sustained during the Lions series.

“There are concerns that it could be months but we need confirmation,” said Sale’s director of rugby, Alex Sanderson. “There are three options – rehab, surgery or crack on – but we haven’t had the decision yet.”

De Klerk continued to play through the recent Rugby Championship but Sanderson rejected any suggestion the injury had been poorly managed. “It is frustrating when someone comes back injured but surely there can’t be any coaches or organisations out there that set out to deliberately injure people?”

World Rugby, meanwhile, has announced that players at all levels can wear tights or leggings for matches with immediate effect. Currently permissible for women, the announcement has been made on welfare and accessibility grounds, not least to prevent players suffering nasty abrasions on artificial surfaces that are now commonplace in the sport.

‘Not good for us’: Bayer Leverkusen CEO on Premier League’s spending power

Who is Nemanja Bjelica? Get to know Warriors’ new X-factor

If you’re Penn State’s James Franklin, do you pick LSU or USC?