It was after Saturday’s draw with Wigan Athletic at Carrow Road that Dean Smith did what every manager has to do following a Championship game. He filed his report on the match officials’ performance to their bosses.

This time, Smith submitted his views to Professional Game Match Officials Limited along with a request: for some feedback on the challenge from Tom Naylor that left Max Aarons with a gash across his shin but which referee Matt Donohue decided was not worthy of a card of any colour, nor a penalty or even a free kick.

“I asked because, for me, that’s not good enough,” Norwich’s head coach told The Athletic earlier this week.

A few days had taken the edge off Smith’s initial anger, but it was clear there was still plenty of it bubbling underneath.

“It worries me the referee saw that and didn’t do anything and thought it was a legal challenge,” Smith continued. “I suppose some people will talk about him (Naylor) getting the ball, but he got the top of the ball and then went over the top of it.

“It’s a reckless challenge. He’s got a straight leg. He is out of control. You only have to look at Max’s shin. The fact he was actually striking the ball and hadn’t got his foot planted is probably what saved him from serious injury.”

Aarons’ anger was also obvious after the game, calling the situation “a disgrace” and the tackle worthy of a red card; never mind a penalty. He also said Naylor had later apologised for the challenge.

Have a watch and make up your own mind.

Do you agree? ⤵️ pic.twitter.com/t30eNP3GBW

Norwich’s reaction was predictable, especially when a penalty could have earned them their first victory of a faltering start to the Championship season (one point from the opening two games) and forgiven their profligate return to Carrow Road, with all the baggage they are still carrying from last season’s Premier League failure.

The pressure and expectation around the club are tangible.

More interesting, however, is how the scenario was viewed beyond Norwich’s gaze.

Sky Sports’ live coverage of the game in the UK saw co-commentator Don Goodman take in replays of the tackle and vocalise that he could understand why it was not given as a foul by Donohue.

After the game, Sky pundit Michael Brown said it was a “borderline” decision. Even former Norwich manager Chris Hughton, his fellow analyst, took a bit of time before eventually saying it should probably have been a penalty.

The Wigan view of the incident was as predictable as Norwich’s, of course.

After spending the past two seasons scrapping in League One to get back to the Championship, a strong challenge that caught the ball first in a game against what could be deemed as a soft, recently Premier League side is the narrative of EFL dreams.

It also ignores how the laws of football are currently implemented across most elite competitions.

That was underlined come Monday in Sky Sports News’ regular Ref Watch segment with former Premier League referee Dermot Gallagher, who felt it was a penalty and a red card.

It is hard to imagine VAR would have decided on anything but the same result had there been such resources in the Championship.

The challenge could be shared across social media with relative ease afterwards because the game was covered live by Sky with a multi-camera setup. It is worth bearing in mind that most EFL fixtures are not recorded by much beyond a single camera, usually located high up in a gantry.

The fewer the TV cameras, the more a game preserves the post-match mystery surrounding key moments and controversy that would have prompted supporters’ discussions for decades. It also usually avoids wider media scrutiny — can there be any without being able to view the incident properly? 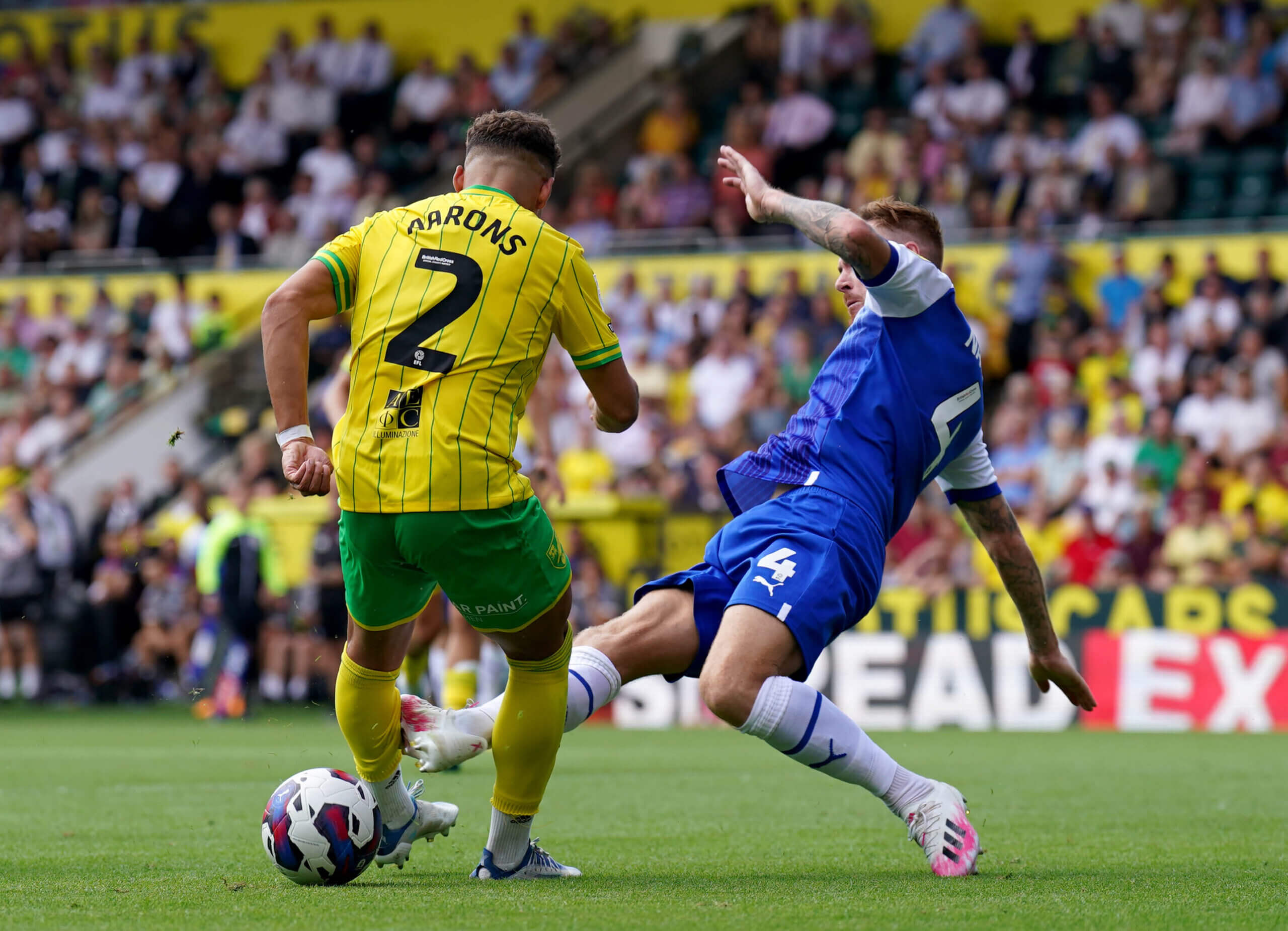 This is just one example, and far from being a definitive one. Some Norwich supporters remain glad there is no VAR in the Championship to interrupt their goal celebrations (assuming they see some goals in the weeks and months ahead), even if it increases the chance of a perceived injustice slipping through.

But it also emphasises a significant cultural difference between the top flight and what goes on further down the domestic footballing ladder.

“There shouldn’t be a difference (between the Premier League and the EFL) because it’s the same sport; the same laws,” Smith said. Yet by the very nature of the two divisions’ respective levels of public exposure and scrutiny, never mind how they are being officiated, the reality is that there is one.

Norwich’s task from here will be to deliver what is expected of them, regardless of the cultural switch they are currently experiencing once again. They have no other option but to take responsibility for any result and respond to it positively.

They head to highly hopeful Hull on Saturday, looking to avoid a third game without victory to begin their bid for a fourth Premier League promotion in five seasons.

Daniel Farke’s team experienced such a barren run three times during their 2018-19 title-winning season: their opening three games, four from Christmas to mid-January and then another four in April on the run-in.

There were three-game stretches without a league victory twice when they went up two seasons ago: immediately after their opening victory at Huddersfield and from January into February.

That should encourage a degree of patience among Norwich supporters they may not otherwise have held. But what they won’t get, whether controversial refereeing decisions or anything else, is any sympathy outside their own (non-COVID) bubble.

Most clubs look at Norwich’s resources with envy. Equally, each team they have faced so far back in the second division — Cardiff, Wigan and Birmingham (in Tuesday’s all-Championship Carabao Cup first-round tie) — have relished the opportunity to get at Smith’s men physically to see how they react to the rougher stuff.

That said, when asked about Norwich by The Athletic after beating them in a penalty shootout at Carrow Road on Tuesday, Birmingham head coach John Eustace denied sensing any psychological weakness or relegation hangover that his side could exploit.

That response may in part be due to the fact the two clubs will meet again in the Championship at St Andrew’s before the end of the month.

By that game on August 30, with four more league fixtures played, there will already be a clearer picture of what Norwich’s reality will look like over the coming season and how this current squad under Smith are going to deal with their unique Championship challenge.

Smith may even have received the feedback he requested on Saturday’s refereeing decision, too.

Welcome back, Norwich – in the Championship, no one can hear you scream