When Steve Bruce walked through the door at West Bromwich Albion’s training ground, he expected to have the Grady Diangana who tore up the Championship in 2019-20 ready and waiting to build his squad around.

But Diangana was not the same player who had thrived under Slaven Bilic. After two difficult campaigns, the 24-year-old was bereft of confidence, and people inside the club worried if they would ever see the thrilling winger who fired Albion to promotion alongside Matheus Pereira.

Of all the players who started 10 or more Championship games in 2019-20, Diangana completed the most dribbles per 90 minutes. His tally of 3.52 was more than second-placed Said Benrahma (3.28) and well ahead of sixth-placed Eberechi Eze, who, along with Pereira and Diangana, were considered among the elite attacking players in the second tier during that campaign.

Last season, the number dropped to 1.79, ranking him 26th among players who played 15 or more matches. This followed a poor individual and team campaign the season before under Bilic and Sam Allardyce, where he could not replicate his form in the Premier League despite moments of early promise. Two goals and one assist in 41 league matches last season demonstrate just how far his star had fallen.

But, for the third consecutive match of the new season, Diangana has proven he can reach those heights again and perhaps surpass them. In front of controlling shareholder Guochuan Lai’s son in the directors’ box, he assisted the second — a left-footed drive from summer free-agent signing John Swift — marking his third goal contribution in four matches. It is the first time in three years that the Congolese-born forward has delivered output to this standard, and all signals point to him finding his feet again under Bruce.

There was plenty to savour in Albion’s 5-2 thumping over Hull City on Saturday afternoon. With the concerns regarding the squad’s ability to convert chances, scoring five against one of the Championship’s form teams will settle nerves within a fanbase that is dreaming of promotion back to the Premier League. Still, Diangana’s willingness to heed the crowd’s calls and go one-v-one with opposition defenders again remains perhaps the most exciting part of the team’s comprehensive display. 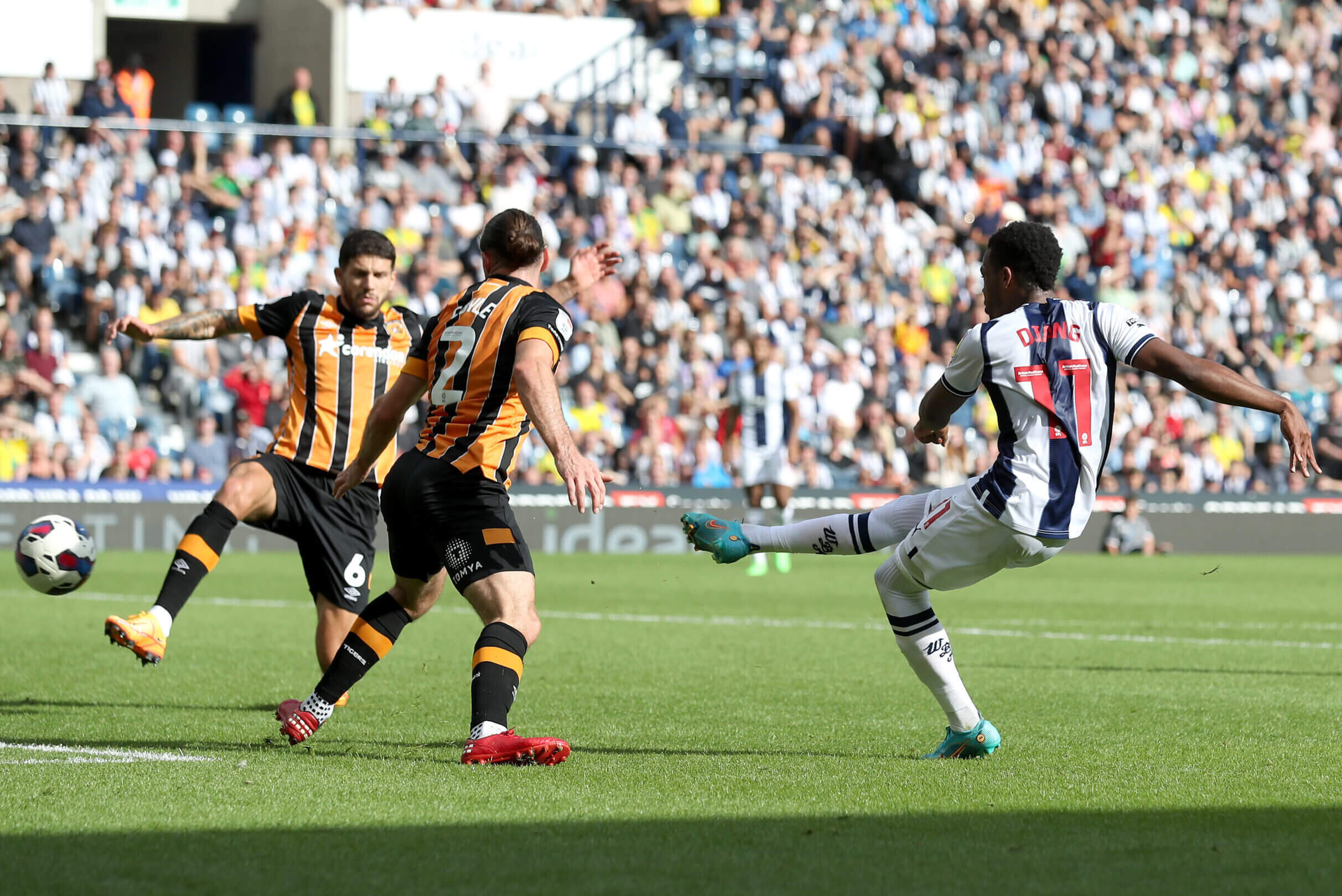 Grady Diangana may not have scored against Hull but he did run the show (Photo: Getty Images)

He created the most chances (four) in the match, had 59 touches, recovered the ball twice and hit the woodwork once, to add to his assist. When he was taken off on the 84th minute by his manager, The Hawthorns crowd stood to applause and chanted “Diangana, baby” to the tune of ‘Don’t You Want Me’ by the Human League.

Before Saturday, the manager was cautious about piling too much pressure on him. He started Matt Phillips in his place in the first match of the season and noted that his consolation goal against Blackburn Rovers resulted from a heavy deflection. When a player has flattered to deceive for an extended period, you cannot blame the manager for exercising some restraint. But as one match turned into two and then three, it is clear that he believes Diangana is on his way back.

“Diangana, that’s the best I’ve seen him play since I’ve been at the club,” said Bruce. “You come here today and purr at some of the stuff he did.

“He gets you on the edge of your seat, what supporters want. Not many people can do that. He just does it by his natural ability. When he does it well, we are a bigger threat when he is like he is today.”

While there is a clear correlation, it is perhaps reductive to suggest it’s down primarily to a switch in position. More than anything, he now looks confident, buoyed by a manager who believes in him and a crowd singing his name again. The metaphorical arm around his shoulder from the manager — who has joked he tries to speak to him in Croatian to get through to him — has brought him back to his best.

“He’s played three games in six days. Arguably, he’s been our best player in all of them,” Bruce said. ”We have to keep him there, keep him right. We’ve got a player again, which when you speak to a lot of people, they’ll say they haven’t seen him for 18 months, from what he was. Good for him.“

To watch Diangana in recent matches is to witness a player who has refound his mojo. With the departure of the talismanic Pereira, Albion fans naturally assumed that their £12million ($14.2m) signing from West Ham United would inherit the mantle. It took longer than initially expected, but if his recent performances are anything to go by, Albion are now entering the era of Diangana.