Caleb Taylor has a favourite video clip from his father’s successful career.

“There’s one I really like, when he’s defending one on one against Cristiano Ronaldo,” says Taylor Jnr, the captain of West Bromwich Albion Under-23s. “I watch that all the time, because it’s crazy to think he did that.

“He gets ripped! But it’s Ronaldo, so I can’t blame him. No one gets on top of Ronaldo, do they?”

It is clear Caleb enjoys ribbing dad Martin, the former Blackburn Rovers, Birmingham City and Watford defender, about being beaten by a football legend.

It is equally clear that his respect and love for the “old man” is huge.

In years to come, perhaps the 19-year-old will grow weary of fielding questions about his father, as other footballing sons have done. For now, though, the subject is very much welcomed.

“It definitely doesn’t get annoying,” Taylor says. “My dad was a very good player. He played for Premier League clubs and England youth teams, so to be compared to him is a good thing in my opinion.

“But I still want to create a name for myself and do even better than he did. That’s my inspiration. I want to get to the very top.”

Caleb has some way to go to match or surpass the achievements of his dad — a Premier League regular in the late 1990s and early 2000s.

But this week has been a huge step in that direction with Caleb making his Championship debut and last night lifting the Premier League Cup as captain of Albion’s under-23s, who beat their counterparts from local rivals Wolves 5-4 in a sudden-death penalty shootout on a raucous night at The Hawthorns. 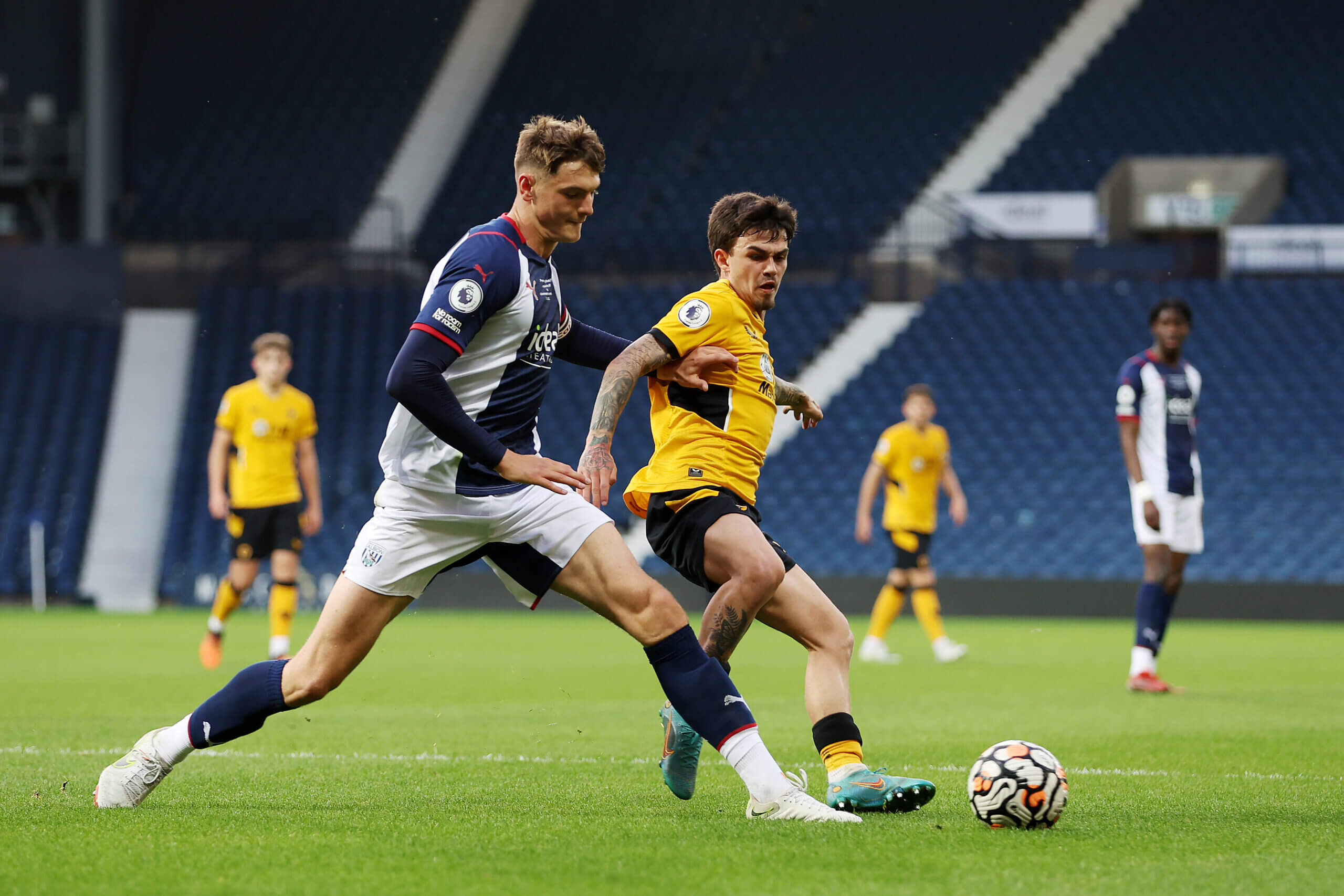 Whether the Taylors like it or not, the comparisons are inevitable.

Martin, now 42, was a centre-back who experienced football’s highs and lows, making more than 300 league appearances in a 14-year pro career, playing for England Under-21s in 2001 and hitting the national headlines in 2008 when he was criticised by then-Arsenal manager Arsene Wenger for a challenge on Eduardo da Silva which left the striker with a broken leg and dislocated ankle that kept him out of action for almost a year.

Caleb, the second of three sons for Martin and wife Victoria, plays the same position, having been converted from midfield soon after joining the Albion academy ranks at the age of 10.

Martin stands at an imposing 6ft 4in tall. If Caleb, whose height is given as 6ft 2in but appears taller than that, is yet to inherit his dad’s ironic dressing-room nickname of “Tiny”, it must only be a matter of time.

The teenager has also inherited a little of his father’s renowned composure in possession — one of many reasons he is now regarded by many at West Brom as the most promising member of a talented group of players who have taken the club to Premier League Cup final victory.

Taylor made his EFL debut last weekend, playing the last half-hour of a 4-0 win over relegated Barnsley in the final game of a disappointing first season back in the Championship for Albion after relegation a year ago.

Then last night he gave a colossal display at centre-back as Albion repelled intense Wolves pressure to claim a 2-2 draw after extra time, before slotting home his side’s penultimate penalty to allow Ethan Ingram to net the decisive spot-kick.

Taylor will probably be loaned out to League One or League Two next season as West Brom look to provide the broadest possible education ahead of what they hope will be a long, successful career with the club.

After just shy of a decade at the club, Taylor does not believe he’d have got as far as he has without his parents’ influence.

“That has helped me massively, because they just have so much experience in everything. They just give me loads of good advice about the football world and what to expect. So I’m not shocked when things happen.

“I remember quite a lot from when my dad was at Birmingham (for six years from 2004). I went in the changing room with him a couple of times at the end of the season.

“I’ve got a couple of pictures of me being carried around the pitch. It was funny because the other day there was a lap of appreciation and I saw other players carrying their kids around the pitch. I thought, ‘Not that long ago, that was me being taken around by my dad’.

“I’ve been playing football since I could walk and I’ve always just had a ball at my feet. I loved tennis, swimming, basketball. I enjoyed cricket as well. I just loved every sport but football was always my main one.

“Around 10 or 11, when I had to pick a sport, football was always the one I wanted — because my dad was doing it but also because I just loved it.

“I joined West Brom from Solihull Moors’ under-10s team. Previously other clubs had been interested from around the West Midlands but my parents didn’t want to put me into an academy system too early, because it’s quite serious and they wanted me to enjoy my football.”

Since joining Albion’s academy in 2013, Taylor has been part of a successful age group.

It did feature Tim Iroegbunam, who made a Premier League debut for Aston Villa in February, and Louie Barry, who has also moved to Villa via a brief spell with Barcelona and spent the second half of this season helping Swindon Town make the League Two play-offs. And it still includes Zac Ashworth, Taylor Gardner-Hickman, Tom Fellows, as well as Taylor, all of whom have played in the Championship this season for Albion.

“Some of them joined when they were six and are still here, which is crazy,” Taylor says. “We’ve all stuck together throughout the whole academy journey, and now it’s coming to an end.

“It’s really special, sharing these moments with these players. They will be my friends for life.”

Several of that group, including Taylor, were given a first-team baptism of fire in a 6-0 Carabao Cup loss to a strong Arsenal side last August; an experience, the defender says, that rather than killing them has made them stronger.

“It was a real eye-opener, and you could really see the level these top players are at compared to myself and where I was at,” he says. “It motivated me to improve myself, and it was a really good experience for me to improve from.

“At the start of the season, I would have been thinking I was definitely ready to play in the Championship. But when you come up against first-team players, you realise just how different it is and how much you’ve got to learn.

“I think it’s been really important that I’ve been exposed to the environment of first-team players. I’m a lot more ready at the end of the season than I was at the start to play in the Championship.”

Taylor captained Albion Under-18s and is now the man with the armband for their under-23s, having signed his first professional deal last summer.

Being skipper is another string to his bow, which might help him turn clear teenage promise into a quality Hawthorns career in the coming years. 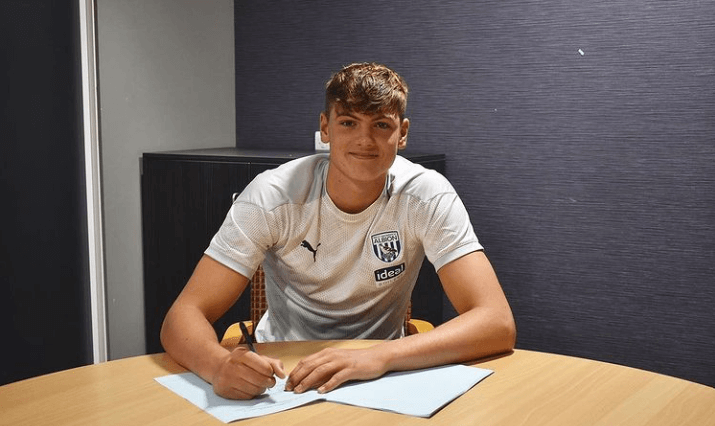 “It’s been drilled into me by my parents,” Taylor says. “They’ve made sure I have the characteristics of a leader and I just really want to help everyone in my team get to where they want to be and where I want to be.

“So since I’ve been young I’ve tried to be a leader.”

Now, after the biggest season of his life so far came to an end at The Hawthorns last night, Taylor is preparing for a summer of maintenance and fitness training in a bid to make an even greater impression on first-team manager Steve Bruce in pre-season.

If he needs advice, he has the perfect mentor on hand in his father, who was signed for Birmingham by Bruce in February 2004. But he would expect a light-touch approach to any post-season debrief on his performance from the man he wants to emulate.

“He’s very good at giving me advice but he’s never too hard on me because he knows where I am, he’s been in my shoes,” Taylor says. “He knows there are always coaches telling me that I need to do this better or I’m doing that wrong.

“He is there for me as a dad. He will give advice when I need it or when I ask for it, but he’s generally just there to support me with my mum.

“They support me no matter what, which gives me reassurance.”