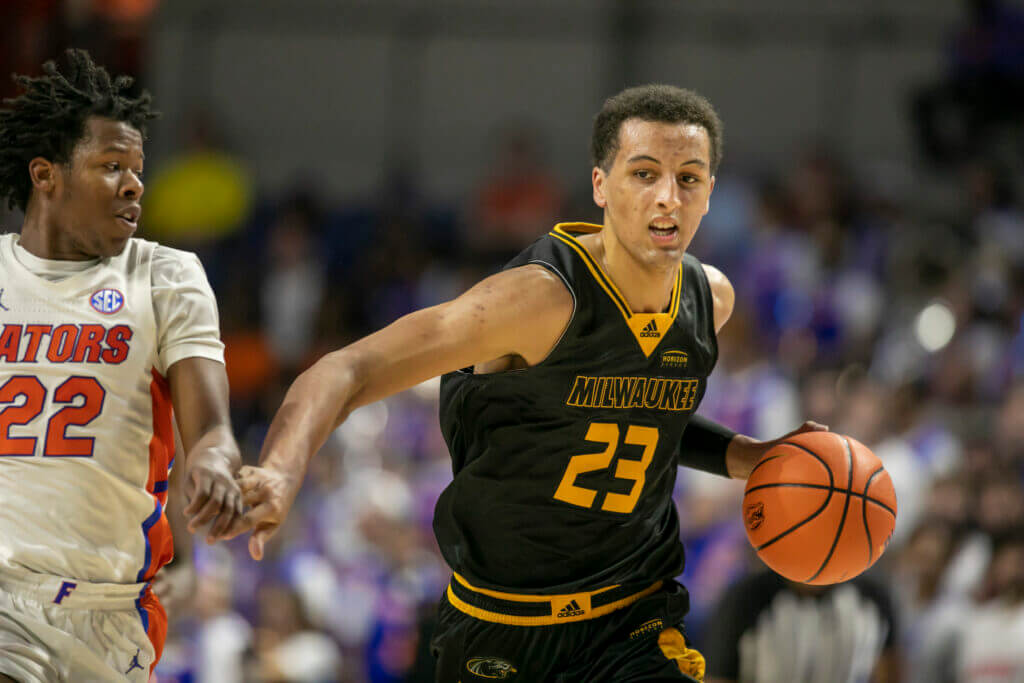 SAN FRANCISCO — Patrick Baldwin Jr.’s high school career ended because of a dislocated left ankle in the second game of his senior season. Before that point, he was considered among the upper echelon of prospects in his class, next to Paulo Banchero, Chet Holmgren and a few other names who went high in the 2022 NBA Draft on Thursday.

But Baldwin’s ankle trouble sent him into a two-year tumble that left him available for the Warriors at the 28th pick. They jumped, gambling on the upside that once had Duke desperate for his commitment, ignoring the 11 games of inefficient UW-Milwaukee tape that cratered Baldwin’s stock.

The Warriors brought him in for a private workout earlier this week, but the unsettled status of that healing left ankle didn’t allow him to go through anything strenuous. Baldwin took some stationary jumpers and watched tape with the front office. Director of basketball operations Bob Myers said, while conversing over film, Baldwin acknowledged that the hobbled left ankle affected his performance. He only played 11 underwhelming college games before being shut down.

“We think it affected him quite a bit,” Myers said. “We asked him when he injured himself (in high school), was he able to get it back? He said no. He was battling it most of the time.”

Rick Celebrini will check out Baldwin’s ankle once he arrives this week before giving any clearance for Summer League play. It’s possible he is limited or won’t compete at all. Myers preached patience. The Warriors will need a whole lot of it with Baldwin. This is a project Myers deemed an “upside swing for a guy who was highly touted but probably underperformed in college.”

Baldwin’s appeal is his size and theoretical skill. He’s 6-foot-10 with a 7-1 wingspan and has a mechanically pretty jumper. At his best, in cherry-picked moments from his freshman season, you see the flashes. Watch him trail in transition and rise up for this pure 3 from NBA range to go up two against a good Colorado team in the second half. This looks like a league-ready stretch big.

Baldwin turned away better offers and went to UW-Milwaukee because his father was the head coach. Myers mentioned the coach’s son aspect of the pick a few times in his post-draft news conference. It’s clearly an appeal for the Warriors, considering their established, complex offensive style.

“Size. Skill. IQ,” Myers said of Baldwin. “We watched some film with him. You can tell he’s a coach’s son. Our system requires pretty high-level thinking. He’s versatile. We think he can play with some of our guys. He’s what you might call a shooting big. But he can also pass, handled it a bit in college.”

Again, there are sparkles of potential beaming from the basket of bad college tape. He had 23 turnovers and only 17 assists in 11 games, but a few of the passes were high level. This is a slick right-hand snag into a perfect bounce pass for a transition layup.

Sixteen of Baldwin’s college possessions ended in cuts. Those led to 16 points. He does have an off-ball awareness, which will be essential in this system and on this roster, where he profiles only as a complementary piece, now and even in the future. Jordan Poole and Jonathan Kuminga are the high-usage on-ball scorers of the next decade.

Here’s the type of Baldwin play that would appeal to Myers and Steve Kerr. Baldwin hits it ahead in transition and eventually finds a cutting window for a posting big, who hits him for a rim attack.

Baldwin moved into the correct spot and drew the foul at the rim on the play, but he didn’t finish. He’s a long wing but not a bouncy one. His 26.5-inch vertical leap was one of the lowest in combine history, and he also ranked near the bottom of his class in lane agility testing. That lingering ankle issue could have plenty to do with those numbers, but it’s still a pre-draft red flag.

So are his efficiency numbers. Baldwin has a clean-looking jumper, but he didn’t make it much. He shot 26 percent on his 5.8 attempted 3s per game, 41.8 percent in 2-point range and 10-of-43 on catch-and-shoot jumpers, per Synergy.

His 21 post-ups resulted in only 13 points. His 16 pick-and-rolls resulted in only 12 points. His 20 isolations resulted in only six points. Those are all far below average marks for any college player, let alone a first-round pick. Baldwin struggled, especially when trying to generate his own shot against higher-level defenses. Here are three bad misses against Colorado and Florida, the two toughest opponents he faced.

Myers said Baldwin isn’t arriving to an expected rotation spot. He will be brought along slowly on the back end of the roster, probably ticketed for plenty of time in Santa Cruz as a rookie. It’s more likely that Ryan Rollins, the second-round guard they selected at No. 44 out of Toledo, has a clearer path to a possible role. Joe Lacob let the Warriors front office pay $2 million to go up seven spots and snag him.

“We talked about can (Rollins) play with Poole?” Myers said. “But at the end of the day, we saw a talent. We didn’t think he’d be there at 51 and, thankfully, Joe agreed and said we could spend the $2 million and go get him. The gap between Rollins and the next guy we had was pretty high, and that’s why we made the move.”

Rollins is expected to fill a roster spot. Gui Santos, drafted at No. 55, is a stash candidate. Myers said the Warriors will decide that in the coming days as the rest of the 15-man roster comes into greater focus.

But the drafting of Baldwin is the highest-leverage decision of the night. The Warriors just won the title, in part, because they hit home runs on Kevon Looney at No. 30 and Poole at No. 28 in previous drafts. Looney took two seasons to get healthy, and Poole took nearly two seasons to show an NBA pulse. So expect patience with Baldwin. It’s a project.