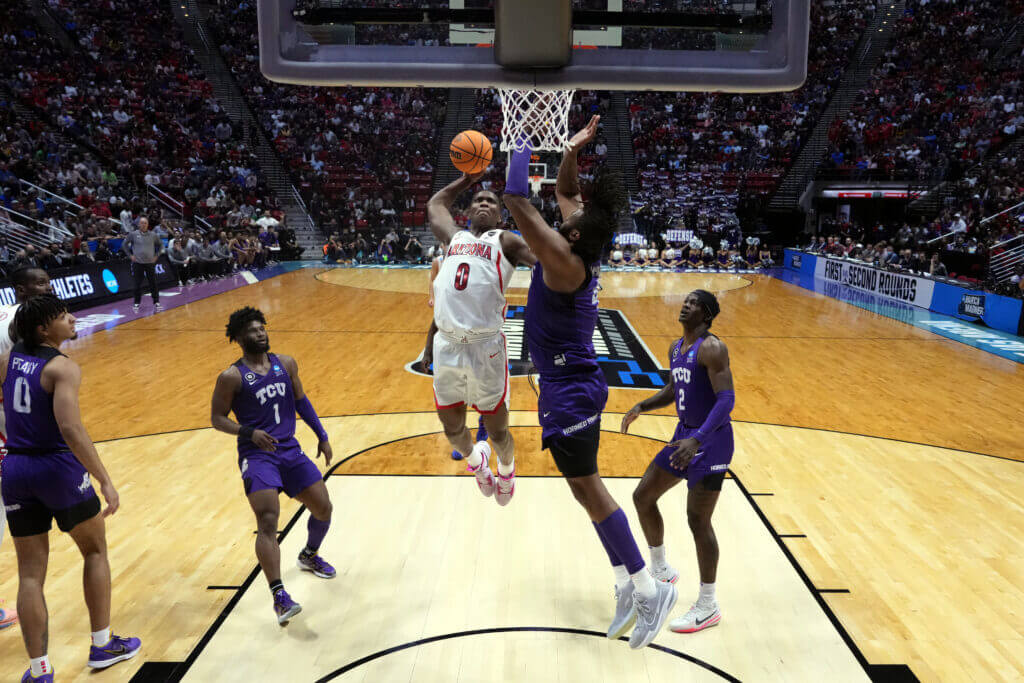 Andy Enfield is about to enter his 10th season as the head coach at USC, and he’s not shedding any tears knowing that next season his Trojans will avoid dealing with Bennedict Mathurin when they play Arizona. “He might be the best guard we’ve had in our league since I’ve been here,” Enfield says. “He’s an elite athlete and scorer, and he’s very competitive. Every possession he was coming at you. And he learned how to score in big moments.”

Indeed, it is not just Mathurin’s eye-popping talent but also his heart-stirring mindset that propelled him into the sixth pick of the 2022 NBA Draft, where he was selected by the Indiana Pacers. All of that was readily apparent on March 20, when Arizona faced a three-point deficit against TCU with just over a minute to play in the second round of the NCAA Tournament. Mathurin converted a dunk off a backdoor cut and then a deep 3-pointer with 13 seconds remaining to force overtime. He made the game’s biggest play late in the extra session when he grabbed an offensive rebound and converted an and-one amid four purple jerseys to guide the Wildcats to an 85-80 win. Even though Mathurin started the game shooting 2 of 9 from the field, he finished with 30 points (on 11 of 13 free-throw shooting), eight rebounds, four assists and two steals. “Benn’s not afraid of the moment,” Arizona coach Tommy Lloyd said afterward. “He’s a special player who has an ability to rise up another level when needed. He has that clutch gene.”

So, yeah, it’s easy to understand why Enfield and the rest of the Pac-12 are happy to see Mathurin take his talents somewhere else. In many ways, he is better suited to succeed in the NBA, where the game is more open and up-tempo. Mathurin has long possessed strength, speed and power, but during his time in Tucson he also developed ball skills, decision-making and defense. Mathurin is one of those rare prospects whose work ethic exceeds his potential. If his progression keeps trending upward, he could end up being an NBA All-Star.

“I like guys that get better,” one Western Conference scout says. “I love his motor and his physical dimensions.” Adds an Eastern Conference general manager: “He just looks the part. He’s not an elite playmaker/passer/ballhandler yet, but he does all the things you like at his position, including defend. He’s going to be an effective two-way player in this league for a long time.”

Mathurin developed his competitive edge the hard way. He grew up in an underserved neighborhood in the borough of Montreal-Nord, Quebec. Benn never met his father, and his mother struggled while raising three kids as a single mom in an area that was plagued by violence and drugs. Benn was heavily influenced by his older sister, Jenn, who ended up playing basketball for NC State, and his brother Dominique, who took Benn to play pickup basketball in local parks when they were young and did his best to keep his brother on the straight and narrow.

Dominique, however, was hit by a car and killed when he was 12. Mathurin moved in with Jennifer’s grassroots coach, but he was hard-headed and rebellious, and it took time for him to learn to trust others. The pivotal moment came when Mathurin was 15 and was discovered by a coach at the recently-opened NBA Academy in Mexico City. The structure, coaching, competition and access to first-rate facilities were a perfect sparks for Mathurin’s inner fire. He chose Arizona over Baylor, but even though he was good enough to log a lot of minutes as a freshman, it took some time for Mathurin to feel like he was part of the team. “He was very guarded and very, very quiet,” former Arizona coach Sean Miller told The Athletic in January. “He was so young, and we knew he came from some tough circumstances.”

Mathuin moved into the starting lineup in mid-January his freshman season — he scored 31 points in a win at Oregon that night — and never looked back. He averaged 10.8 points and 4.8 rebounds, and though many players in Mathurin’s position would have tested the NBA Draft waters, he never put his name into the pool. “I didn’t want any weaknesses,” he told The Athletic.

There weren’t many of those to be seen last winter. Mathurin was an easy choice to be named Pac-12 player of the year after averaging 17.7 points, 5.6 rebounds and 2.5 assists, and he was the biggest reason Arizona went from being unranked in the preseason to a No. 1 seed in the NCAA Tournament. This time, there was no doubt as to whether turning pro was the best move.

Now, Mathurin needs to move forward without forgetting all the things that got him to this point in the first place. “He’s stuck a little bit right now between being a spot-up shooter and a straight-line driver, and he has to make more progress as a playmaker,” Lloyd says. “But he’s one of the hardest workers I’ve ever had, and he has a lot of room to get better. He was very coachable, and he definitely has a plan. When he’s faced with clutch moments in the NBA, I have no doubt he’ll be ready to deliver.”

Russia-Ukraine war: what we know on day 121 of the invasion

Greek state TV broadcasts advice on how to siphon gasoline