The lack of central defenders in the squad has been a well-documented bone of contention for supporters and manager Scott Parker following promotion from the Championship in May.

But with an eye for a defence-splitting pass from his own third, combined with an aggression that seems tailor-made for the Premier League, Senesi could prove worth the wait.

The Argentina international has been playing as the left centre-back in a back four at Dutch club Feyenoord, but The Athletic understands he’s been signed to operate in the middle of a back three in Parker’s preferred 5-3-2 formation.

In the season-opening 2-0 win over Aston Villa on Saturday, Parker used defensive midfielder Jefferson Lerma as the right-sided centre-back rather than risk James Hill, who although a specialist defender is just 20 years old and has started one game for the club.

Although the 30-cap Colombia international was awarded man of the match and even scored the game’s first goal, his strengths are better suited to midfield, and Senesi’s arrival should allow him to return to more familiar territory.

At Feyenoord, Senesi saw plenty of the ball and played almost as a deep-lying playmaker, an aspect of his game which led Bournemouth’s recruitment team to believe he would make an ideal addition operating between two other centre-backs.

When watching Bournemouth’s latest recruit in action, the first thing you will probably spot is his penchant for sending raking passes from defence up to his team-mates in the final third.

That directness in attack goes hand-in-hand with the style of football Parker wants Bournemouth to play over the next nine months as they try to avoid an instant return to the EFL.

The middle defender in his back three is tasked with setting the tempo and initiating attacks, so they generally see more of the ball than any other Bournemouth player. Chris Mepham had that role against Villa and completed more passes (38) and took more touches (69) than any of his team-mates.

Also, if Parker wanted to switch to a back four, there is a feeling within the club that Senesi adds variety as a left-footed centre-back — the team would then not miss captain Lloyd Kelly so much, should he pick up an injury.

Now for some deeper analysis.

Smarterscout is a tool that allows us to analyse a footballer’s attributes and highlight their strengths and weaknesses using data.

The pizza chart below gives Senesi’s play in the Dutch Eredivisie last season — where they finished third behind Ajax and PSV Eindhoven — a rating from zero to 99 in various metrics, based on either how often he performed a certain action or how effective he was at it compared with others playing in the same position.

While the ratings here might make him look like the best defender in the world, there are a few caveats to unpack.

His high ratings for defending intensity (94 out of 99) and disrupting opposition moves (98 out of 99) show Senesi is very active in his defensive work and effective at regaining possession for his team. 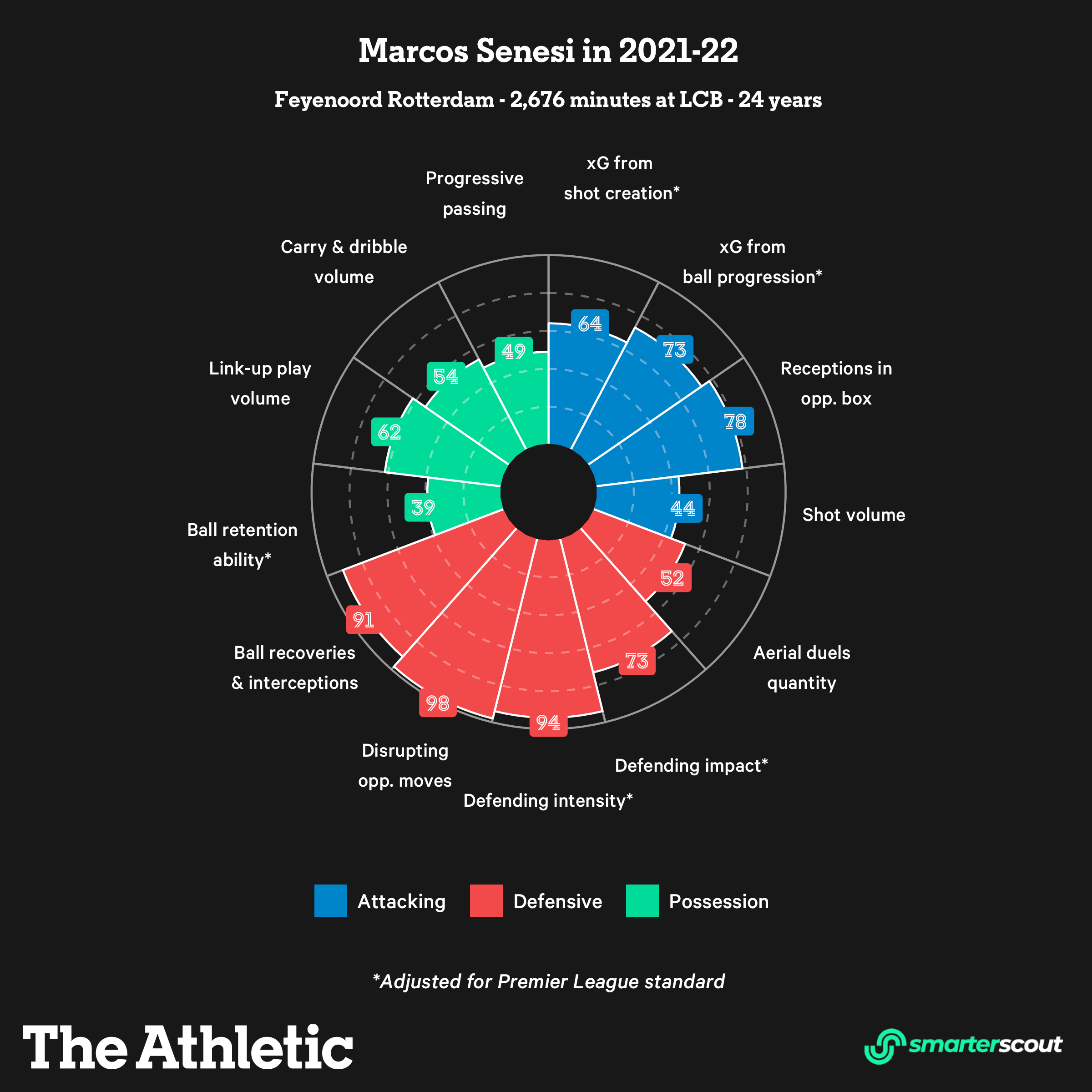 But being rated in the 90s in these areas is not necessarily a good thing.

The implied aggression in defensive duels means he could be caught getting too tight to his opposite number. As the Premier League is played at a much quicker pace than the Eredivisie, the 25-year-old would be wise to try to use anticipation and timing to mark the space rather than the man.

Fortunately, his high rating for ball recoveries and interceptions (91 out of 99) shows an ability to read the game and be able to cut out passes in key areas of the pitch.

Senesi’s on-ball strengths are also reflected in his pizza chart. That 73/99 rating for expected goals (xG) from ball progression tells us there is only a 27 per cent chance another Premier League centre-back does a better job of propelling the team upfield. 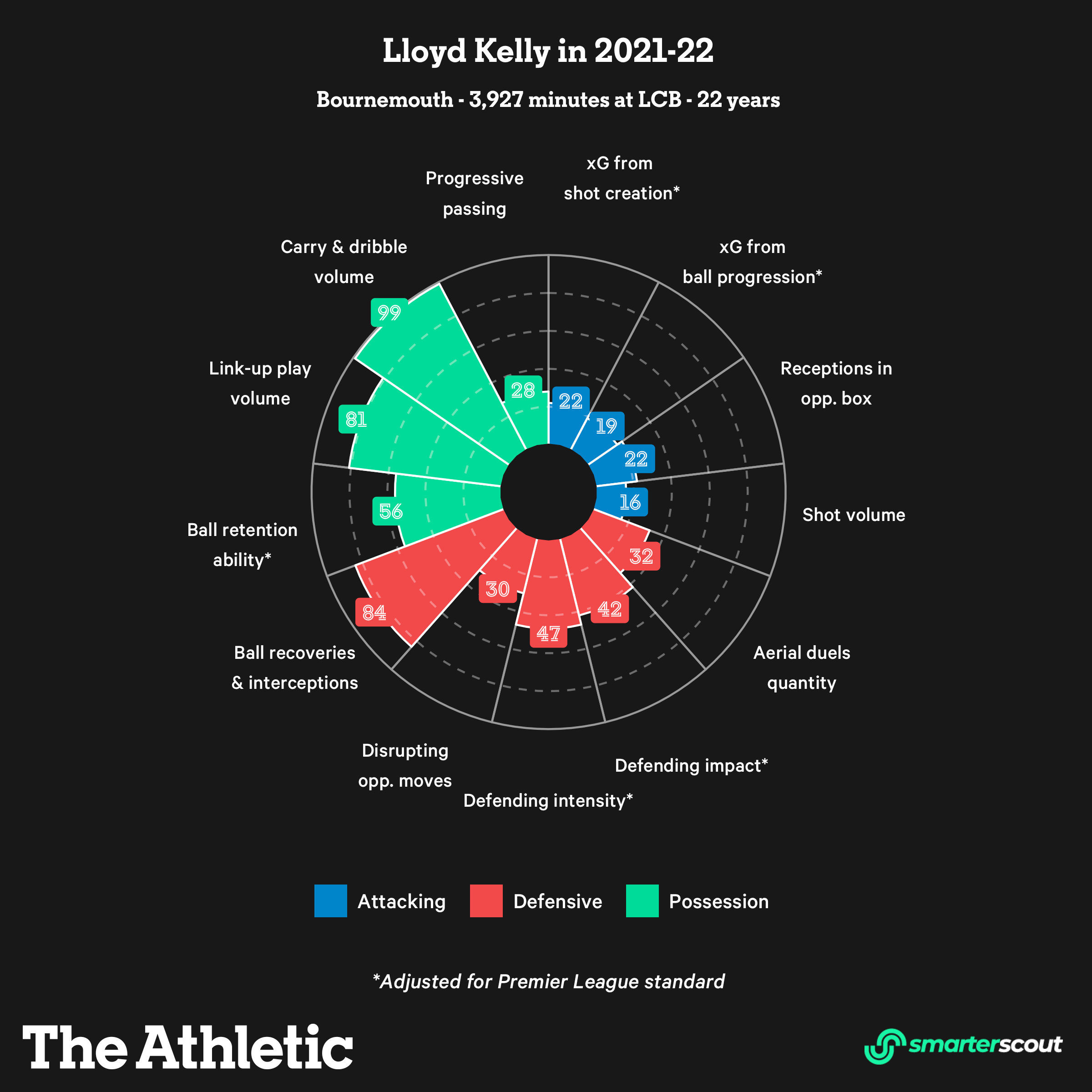 As for Kelly, Bournemouth’s most progressive centre-back last season, his possession ratings outweigh virtually every other part of his pizza chart. This is mainly because Bournemouth dominated the ball in the 2021-22 Championship on their way to automatic promotion, and Kelly did more of his work with it than when the opposition had it.

The 23-year-old’s maximum rating for carry and dribble volume shows his preference for progressing the ball by dribbling it forward, as opposed to Senesi’s inclination to spray quarterback-esque passes about from deep.

Such variation in breaking lines and kickstarting transitions gives Bournemouth another dimension to try to catch teams off guard. 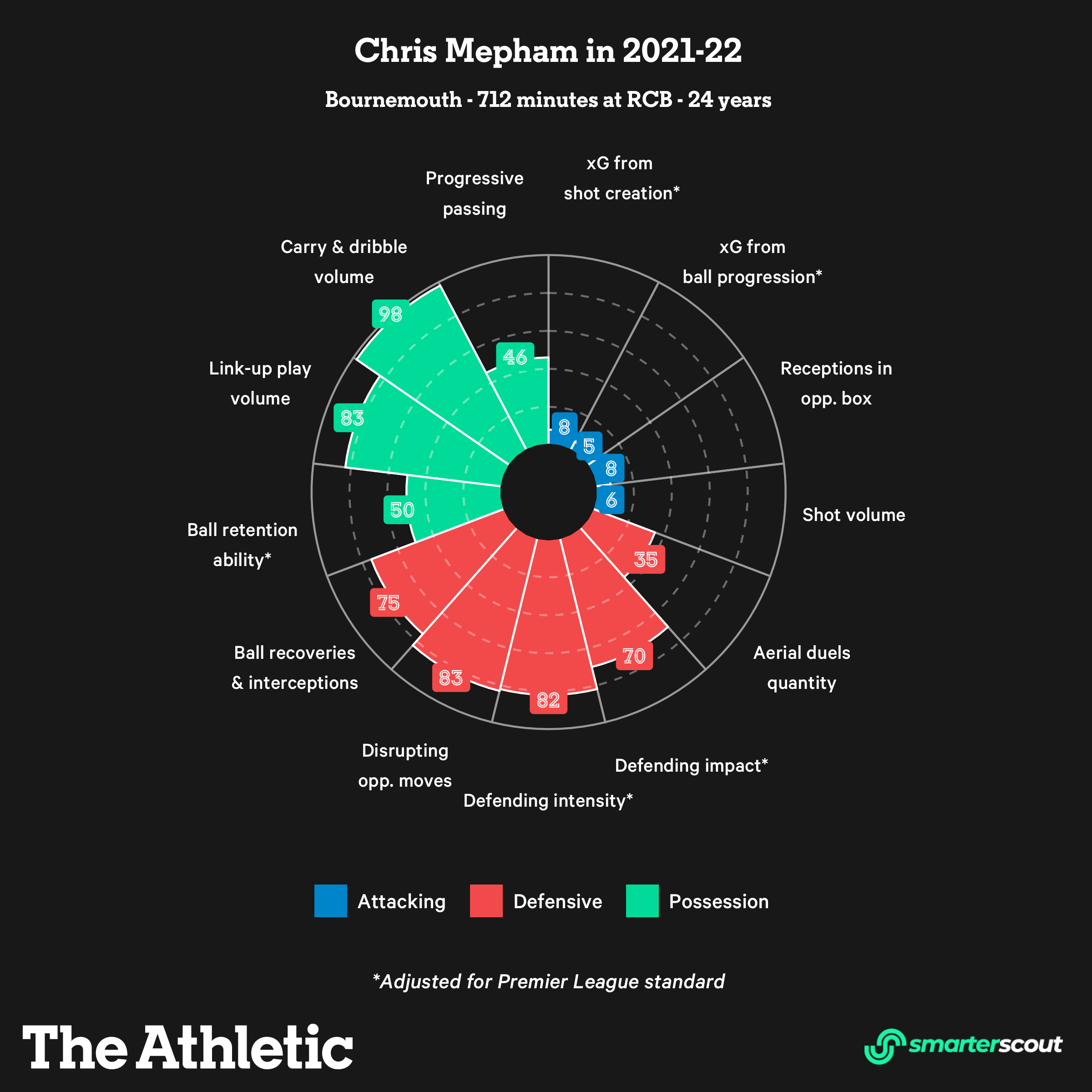 Mepham’s pizza chart for last season compares him with other right-sided centre-backs so he cannot, therefore, be assessed like-for-like up against Kelly and Senesi, who both played left centre-back. However, it still gives us an indication of his style.

The Wales international was usually used as a substitute to help consolidate narrow leads and make sure they turned into wins so he largely had a more defensive remit than Kelly, which explains why his numbers in those areas of his game look better.

In the heart of the back three against Villa at the weekend, Mepham showed more of that aggression — also winning the most aerial duels (five) and making the most clearances (13) of any Bournemouth player.

That Senesi plays with a similar defensive intensity to Mepham, as shown by smarterscout’s ratings, suggests a player who won his first senior cap against Estonia in June (coming on for Manchester United new boy Lisandro Martinez) should slot into the middle of Parker’s back three as easily as Mepham did.

Senesi is one of a growing number of modern defenders who rarely go to ground when winning possession.

Instead, he uses his strength and awareness to usher opponents off the ball. By recovering the ball in this way, he is already on his feet, which makes it easier for him to play forward as he is less prone to the counter-press.

The Europa Conference League final between Feyenoord and Roma in May pitted Senesi against Tammy Abraham — a good chance for Bournemouth’s scouts to assess his strengths up against a Premier League-level forward. His signing indicates they were happy with what they saw, even though Feyenoord lost 1-0, but it is worth examining how he handled Abraham’s speed on the night.

The first screengrab below shows the former Chelsea striker dropping into his own half to receive a pass from Bryan Cristante.

With Senesi looking to pounce after his initial touch, Abraham lets the ball go across him, then tries to run beyond his marker. 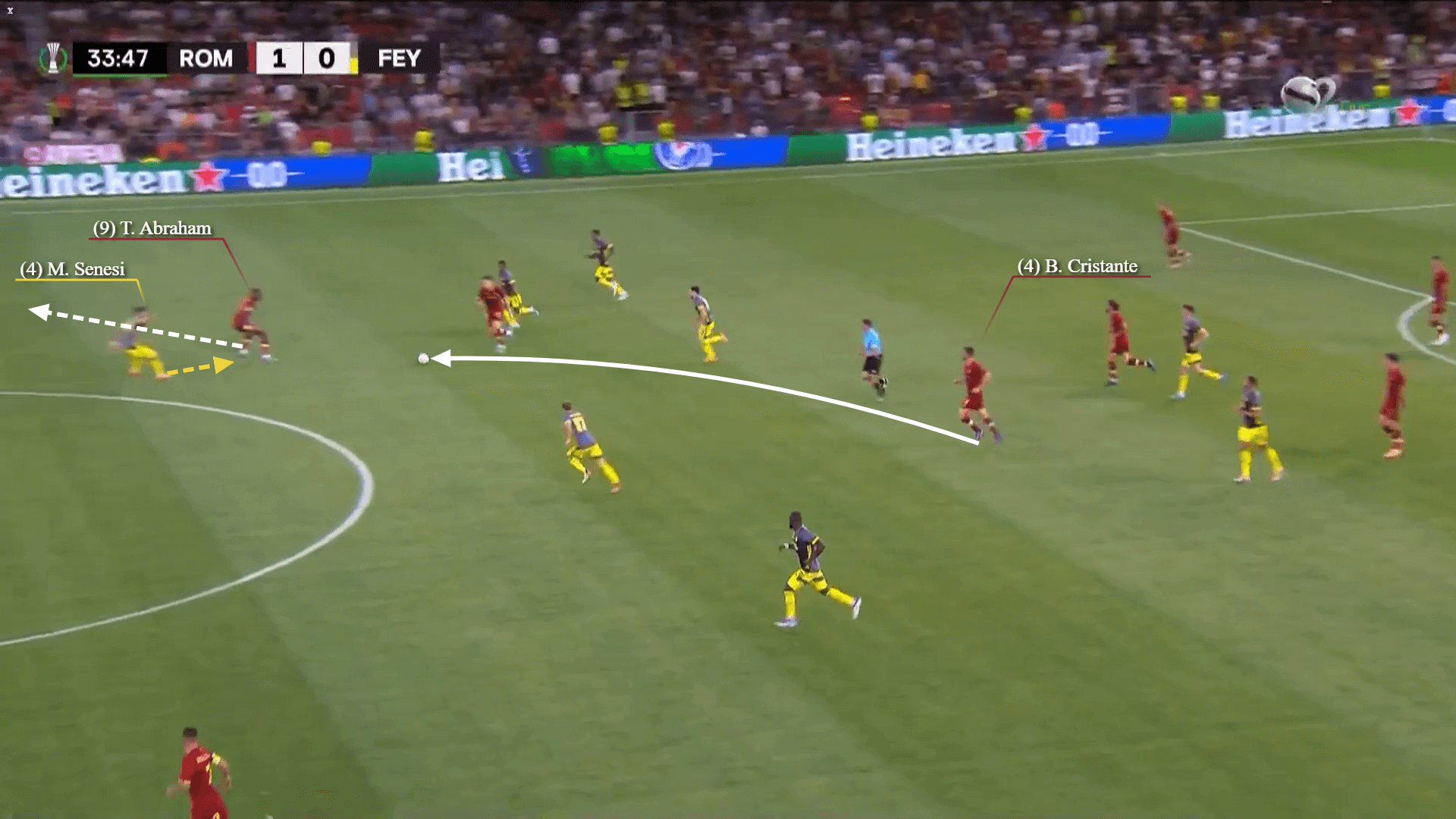 While he is not the quickest and stood to lose a foot race between the two players, Senesi relies on his defensive nous and refuses to let the 11-cap England international, who scored 27 goals last season in all competitions, reach full speed — allowing him to stay shoulder-to-shoulder with Abraham. 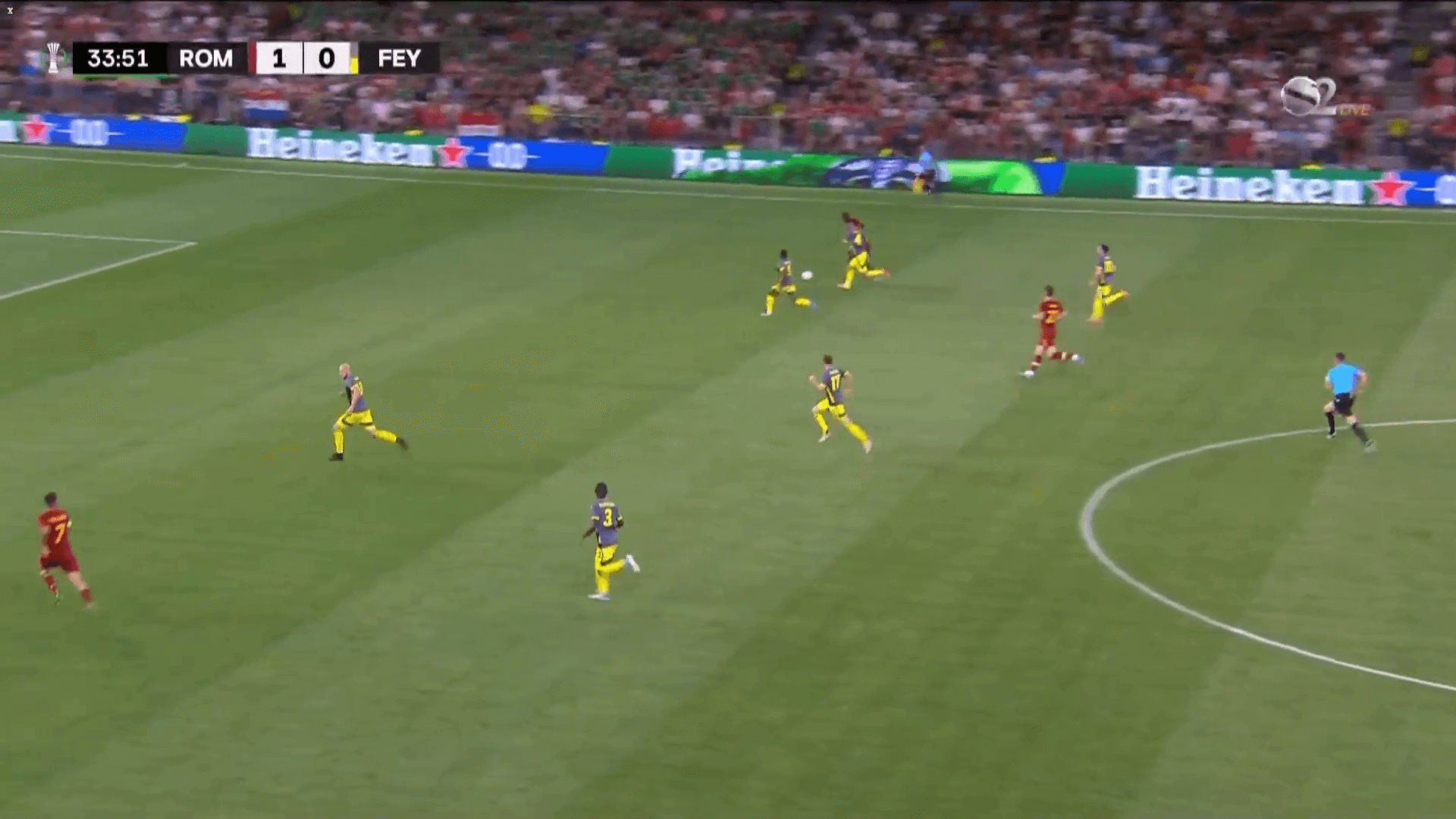 As Abraham nears the penalty area, now-Manchester United left-back Tyrell Malacia goes to ground in an attempt to prevent a cross. But one never comes — because Senesi remains composed and wrestles Abraham off the ball cleanly. 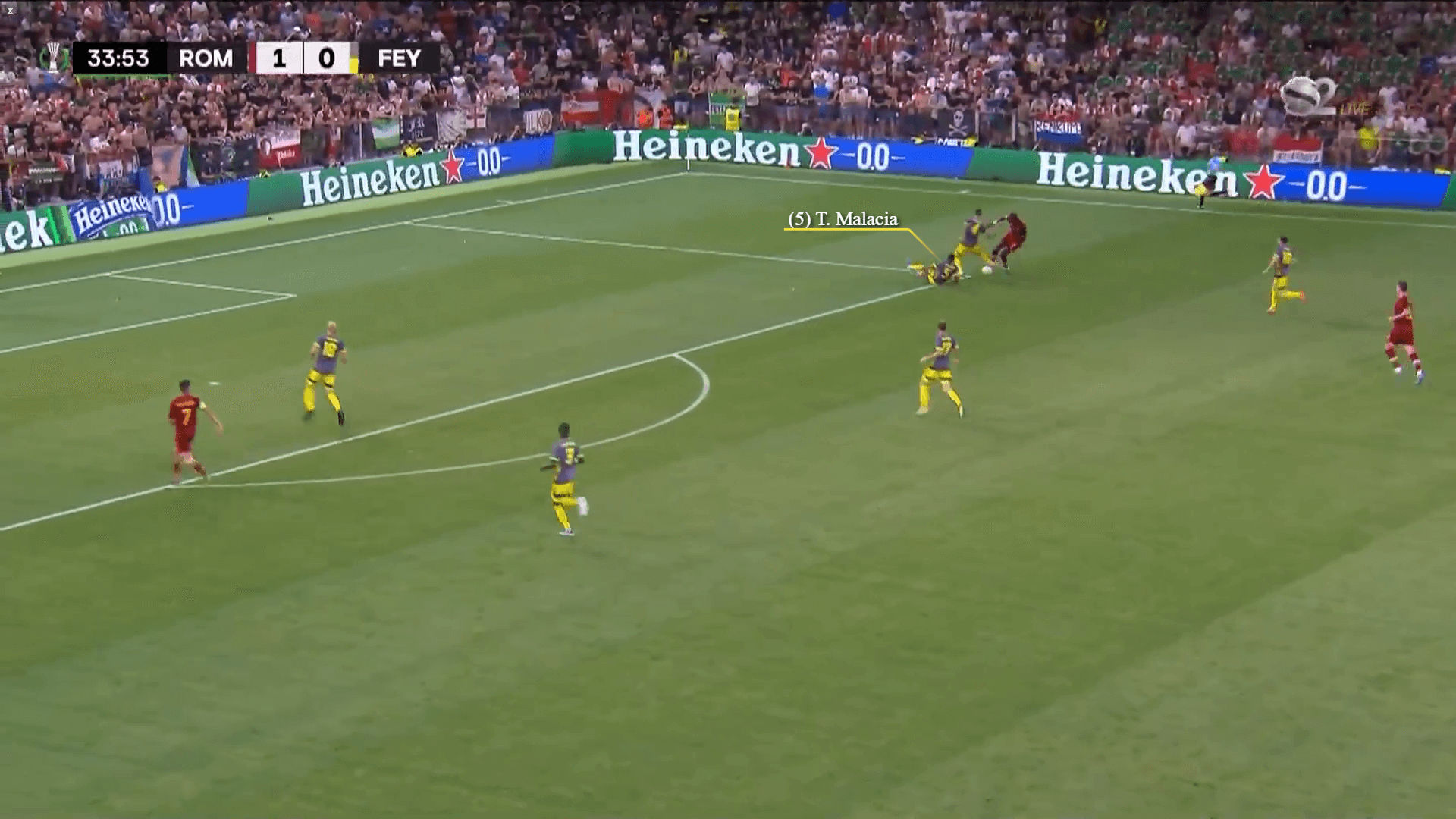 It is understood Bournemouth’s scouts were impressed with Senesi’s ability to get the better of such an athletic forward in one-on-one scenarios like that. His awareness that Abraham wanted to beat him for pace and having the nous to make just enough contact to ensure that didn’t happen without giving away a foul were qualities that appealed to them in particular.

While he might not be familiar with the Premier League, his duels with Abraham that night suggest Senesi knows how to deal with quick and physical attackers — skills he will have to call upon to make that transition to English football.

On the ball, Senesi is a very cultured passer for a central defender and has developed a trademark pass out from the back to team-mates making runs in behind.

With Jordan Zemura, Dominic Solanke, Kieffer Moore and others all looking to stretch opponents, he could provide the perfect release ball for Bournemouth to break at speed.

Against NEC Nijmegen last September, Senesi worked the ball from back to front in five seconds with a delightful long pass for winger Luis Sinisterra, now of Leeds United, to score. Note the two Feyenoord midfielders pointing towards the Nijmegen goal in the grab below, encouraging Senesi to go long. 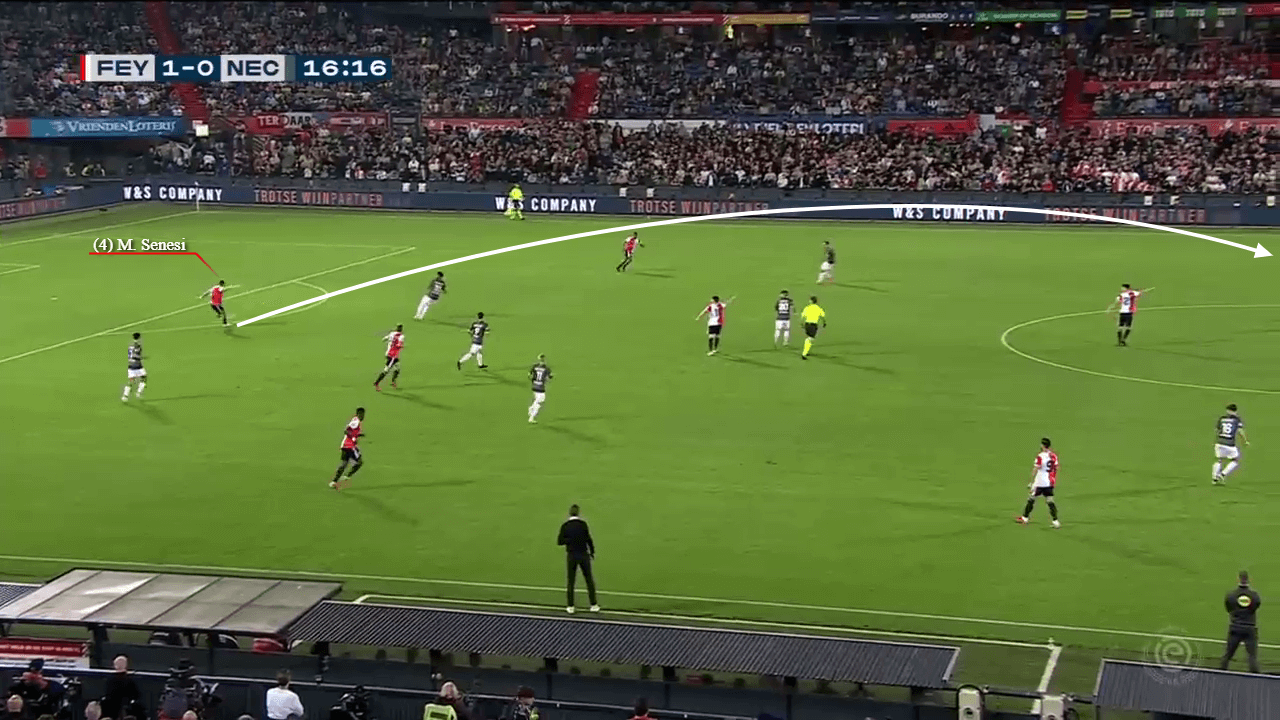 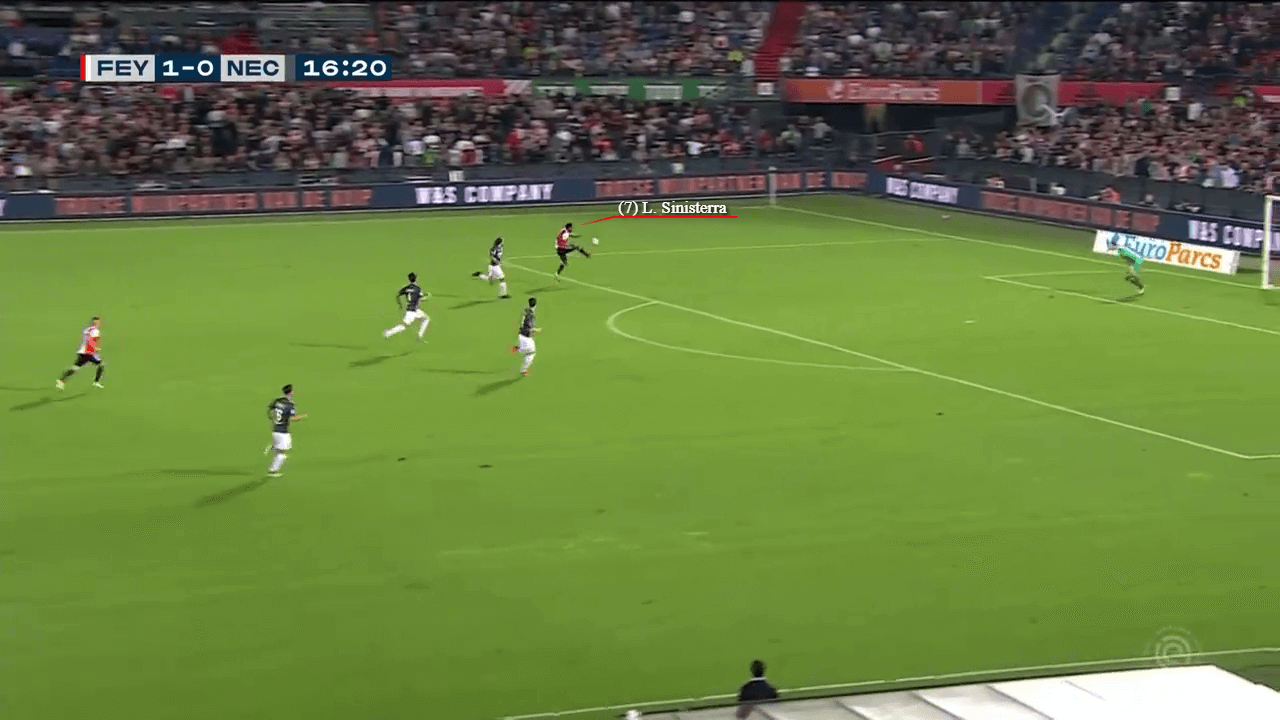 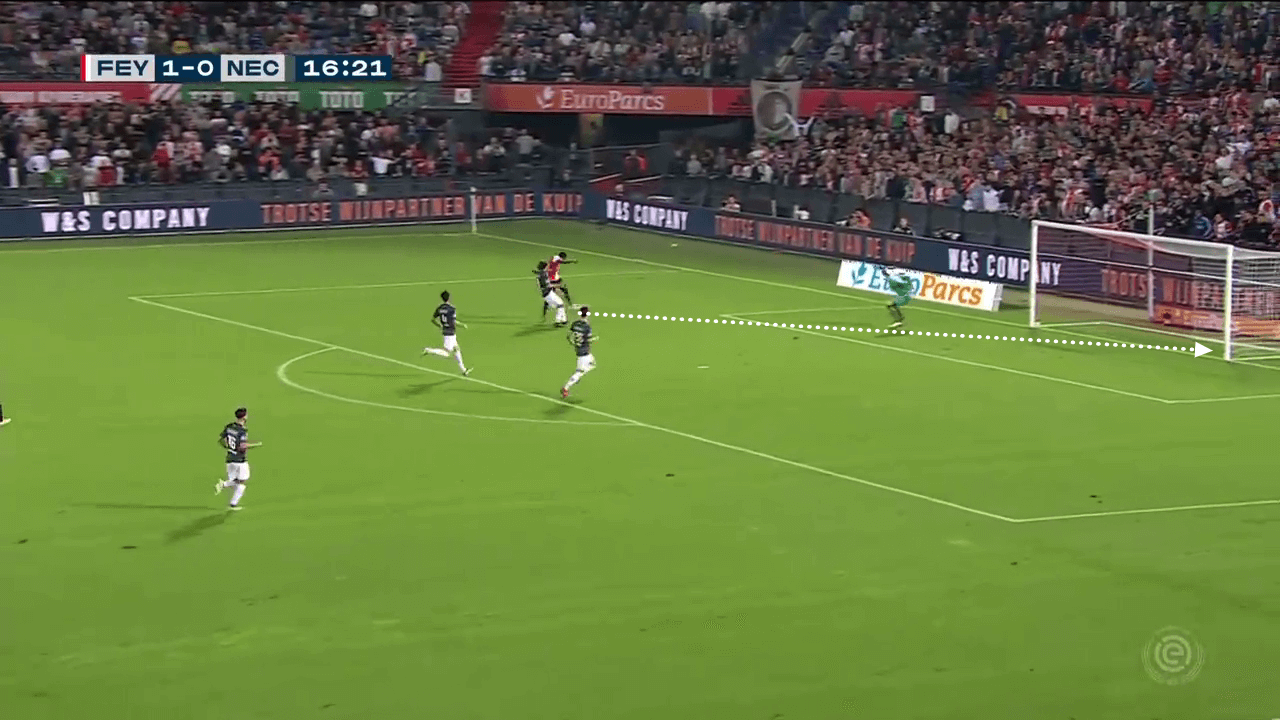 Of course, Senesi is unlikely to get as much time on the ball in England as he did in the Netherlands. But, as seen in Bournemouth’s clever kick-off routine against Fulham last season, Parker and his coaching staff are more than capable of manufacturing quick passing moves to get their team close to goal.

Signing Senesi means Bournemouth finally have the centre-back they need.

His proficiency on the ball and his controlled aggression when attempting to win it back should give the team more defensive cover while also allowing them to build play in a variety of ways.

Britain faces crisis upon crisis, and our leaders are absent. This is how a country falls apart