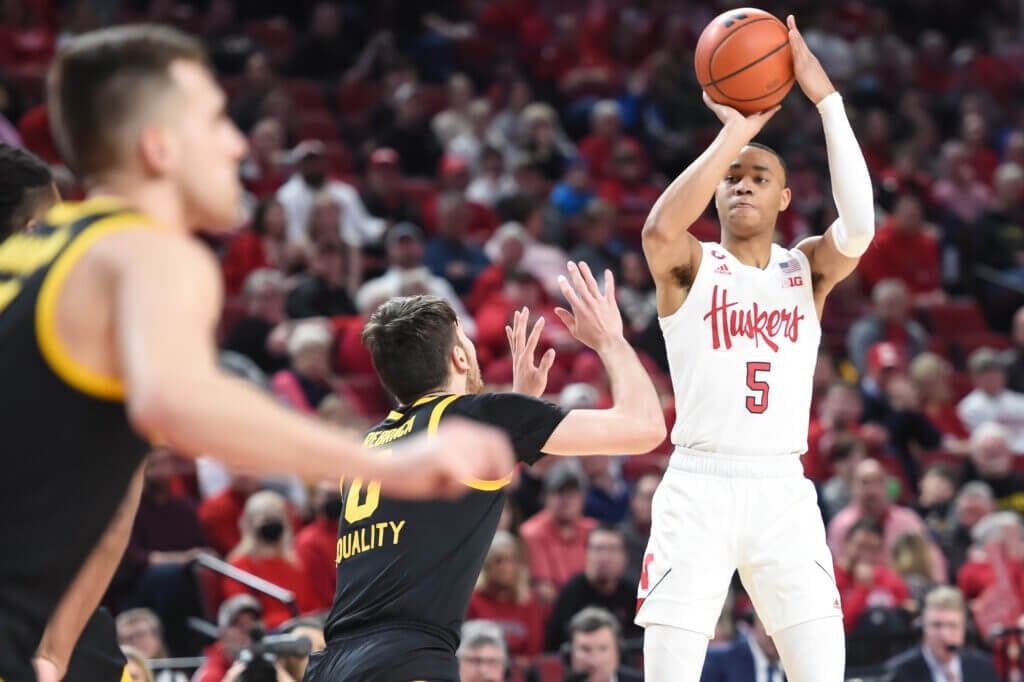 If there was a wall, Bryce McGowens never hit it as a freshman at Nebraska this year.

The highest-rated signee in school history as a five-star prospect out of Pendleton, S.C., McGowens, a 6-foot-6, 180-pound wing, factored heavily in the Huskers’ late-season surge to escape the basement of the Big Ten standings. With hopes long dashed of a turnaround season, Nebraska won consecutive road games at Penn State, Ohio State and Wisconsin to close the regular season.

McGowens ignited the push with a 25-point effort against the Nittany Lions, then scored 26 against the Buckeyes, dominating on the offensive end for stretches.

His season-long improvement signals a bright future for McGowens, Nebraska coach Fred Hoiberg said. McGowens is headed to Charlotte, which acquired him in a trade with Minnesota, who picked him 40th overall in the 2022 NBA Draft.

“He’s got a ton of upside and is a much better shooter than his percentages showed,” said Hoiberg, coach of the Chicago Bulls from 2015 to 2018. “He struggled with physicality early in the year, but at the end of the year he was really doing a great job of playing through contact.

“In our win at Ohio State, he was unbelievable. He’s a three-level scorer, that’s for sure.”

McGowens ranked third nationally among freshmen in scoring at 16.8 points per game. His 17.3-point average in Big Ten games was the highest by a freshman in the league since D’Angelo Russell’s lone season at Ohio State in 2014-15.

McGowens shot 40.3 percent from the field and 27.4 percent from 3-point range. He connected on 83.1 percent of his free throws, hitting more shots from the line than any other freshman in the country.

The versatility in McGowens’ offensive approach will translate well to the NBA, Hoiberg said.

“His ability as the season went on to play through contact is a direct correlation to his work ethic in the weight room,” Hoiberg said. “And he’s only going to get stronger. He has a great frame. He will add size very easily as he continues to develop.”

In fact, Hoiberg said, McGowens’ dedication at age 19 to improving his strength level most impressed the coach. At the height of the college season, McGowens continued to work to find time for at least five sessions in the weight room per week.

“It showed his understanding of what he needed to do to take his game to the next level,” Hoiberg said. “He transformed his body over the course of the season. It’s sometimes hard to get (young) guys to buy into that. He saw how beneficial it was, so you’re not going to have to get him to understand the importance of the weight room.”

Both of McGowens’ parents played college basketball. Older brother Trey played two seasons at Nebraska and shared the court with Bryce in 2021-22. The younger McGowens, named the Big Ten newcomer of the year by the Associated Press, was voted eight times as the league’s freshman of the week in 2021-22.

“He’s a world-class kid,” Hoiberg said. “There’s not going to be any issue with Bryce. You never have to worry about him off the floor.”

The biggest question? His defense.

McGowens possesses the athleticism and physical tools to grow into a strong defender. Hoiberg saw signs of it in his one-and-done season at Nebraska.

“That’s an adjustment for everybody who gets to (the NBA),” Hoiberg said. “You’re playing against the best athletes in the world, especially at his position. That’s something he’s going to have to continue to work and grow to do.

“But he was a lot better at the end of the year than he was at the beginning.”

It was a theme that applied to McGowens’ full arsenal of skills.