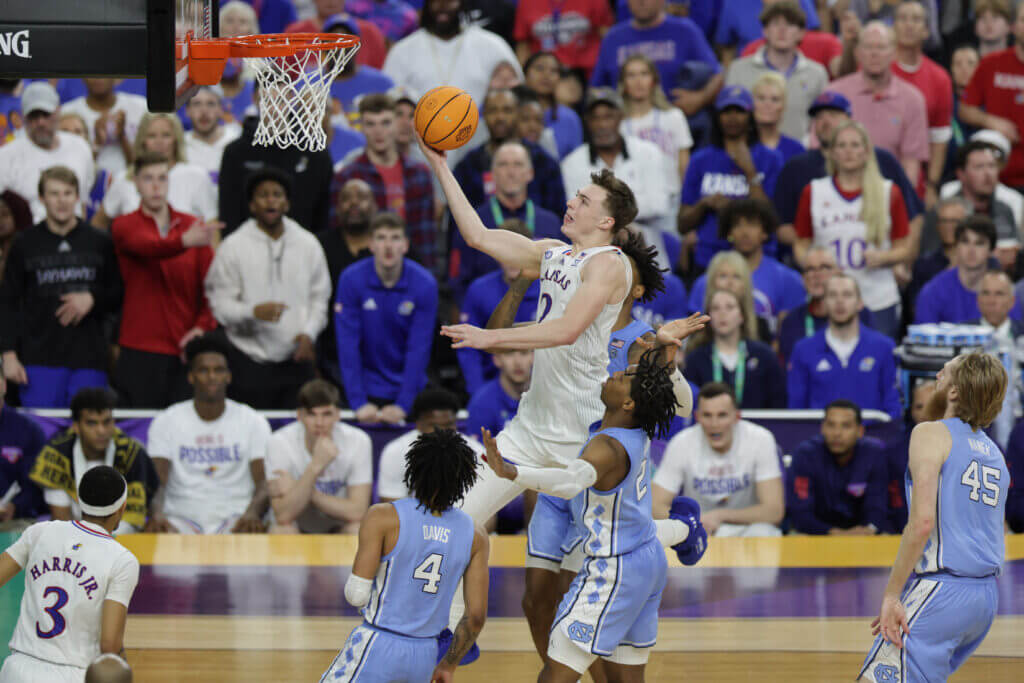 During Final Four weekend in April, Kansas wing Christian Braun was asked about a tweet he’d sent out the previous week that read “that’s a lot of trophies for a team that needs to get more athletic.”

The tweet came in response to a comment Bill Self made the previous March, after the Jayhawks suffered a blowout NCAA Tournament loss to USC, about how Kansas needed to get more athletic. Braun never lets a slight pass, even if it’s from his coach. He always keeps score. It’d be easy to view this as cocky and combative. If you don’t know him, you might see him shouting an expletive at the crowd and think he’s a wee bit crazy. Maybe even a showboat. But, really, he uses something somebody says or a possible slight in-game as fuel. It never distracts from his goal of winning and doing so in the team structure. And the essence of who Braun is was reflected at the end of a long, thoughtful response he gave about why he’d sent that tweet: “It was all all about winning. Nobody’s talking about personal accolades. You see Ochai (Agbaji) deflects everything to his team. And I think it’s really cool to see, especially guys I grew up with, accomplish those things. And then to say it’s all about the team. … You see everybody talking about the team. And I think that stems from being together for so long.”

This is the politician side of Braun. Much like Self, he knows the right things to say, but he’s fiery between those lines. “Bro,” Agbaji said when asked about on-court Braun, “he’s a whole different guy. He’s like an asshole.”

This is the guy the Denver Nuggets fans are surely to fall in love with. Braun was one of Self’s all-time favorites because of his combination of competitiveness, basketball intelligence, hustle, toughness and athleticism. This isn’t just a guy who plays the right way, although, yes, he is well-schooled and does play a smart game. Braun has proven himself to be an athlete, especially at 6-foot-7, as evidenced by his 40-inch max vertical at the Combine.

Braun is at his best in the open floor in transition. He’s a good rebounder — averaging 6.5 rebounds per game as a junior — and Self calls him the best player he’s ever coached at chasing down 50-50 balls. He grew late and was a point guard at the youth and high school level, and that shows in grab-and-go situations. He plays with his head up and is good at finding his way into little creases in the defense. He uses long strides or Eurosteps to confuse defenders, and he’s mastered goofy-footed finishes once he gets to the paint.

Early in his career at Kansas, Braun’s role was as a spot-up shooter. That’s how he found his way onto the floor as a freshman when KU’s stars were Devon Dotson and Udoka Azubuike. Braun was motivated that season by message board fodder after he’d committed to Kansas speculating that he’d redshirt as a freshman. Instead, he shot 44.4 percent from 3, averaged 18.4 minutes per game and started five games for the team that was considered the national title favorite in the COVID-19-shortened 2020 season.

Braun was always more slasher/playmaker than shooter growing up, and he showed that and his athleticism as a junior. It took him only 11 games to make more 2s than he’d made his first two seasons combined. He had impressive shooting splits his final season, making 54.5 percent of his 2s and 38.6 percent from 3. With the ball in his hands, he often looks to get downhill. He’s also a smart cutter and gap filler in transition. Lose him off the ball, and he’ll take notice.

Self always wanted to see Braun take more 3s. He quickened his release through the years, but he still has a dip. He doesn’t hunt for his shot, and he turns down more good looks than he should, but given time and space he’s a good shooter. He seems to have a sense for the moment, and those are the times when he’s aggressive with his shot. When he’s willing, he’s dangerous. This past season he made 46.7 percent of his jumpers when dribbling off a ball screen and 48.1 percent on dribble hand-offs. When a defender goes under, he’ll make them pay.

Gaining confidence in his shot and continuing to quicken his release are the next steps for Braun.

What will get Braun on the floor early on is probably his defense and the fact he’s not going to make many mistakes on either end. He rarely ever gambles defensively and is usually in the right spot. He’s smart off the ball. Kansas would zone up on the weak side. Watch as he does his job covering two opponents and then giving a good contest on a long closeout.

Braun is also effective on the ball containing the dribbler and keeping his chest in front of the ball. He’s not going to gamble or reach. He does a good job switching up when he’s involved in a ball screen, always staying on the handler’s strong hand with the goal of forcing a tough shot, where his length helps him contest.

Braun is the type of player who will fit into whatever role makes sense for the Nuggets. He’s dependable too. He broke his hand during the summer before his freshman year of high school and refused to have surgery — which required the insertion of a screw — until the end of the summer season. He never missed a game at Kansas and played the final two months of his sophomore season with a sore wrist he refused to have examined.

“I don’t know that the dude has taken two possessions off since he’s been here in practice,” Self said midway through his junior season. “He gets hit in the mouth, he gets a knee to the thigh, he gets the wind knocked out of him, and he won’t even think about going to see a trainer.”

Braun’s upside depends on whether he ever becomes the knockdown shooter Self wanted him to be. But it’s a good bet he’s going to figure out the essentials to survive in the NBA game. And if he has some doubters along the way, then he’ll be an even better bet to succeed.