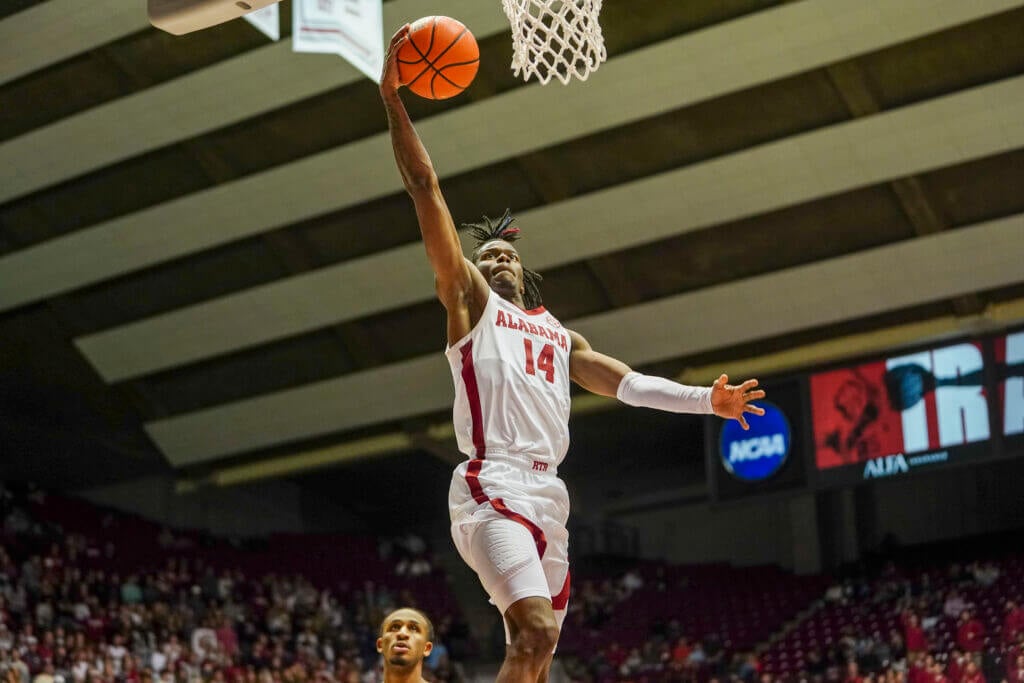 When Keon Ellis arrived from junior college two years ago, Alabama was fairly loaded with wings. The Crimson Tide had a pair of pros, Joshua Primo and Herb Jones, on that SEC championship-winning roster. Primo became a lottery pick and regular rotation player for the Spurs as a rookie, while Jones was the SEC Player of the Year and started 69 games in Year 1 with the Pelicans. The fact that Ellis still somehow carved out 17.5 minutes per game and became a key role player on that team was telling.

“He figured out how to get himself on the floor,” Alabama coach Nate Oats says, “which is exactly what you have to do in the NBA. We had two guys playing his position who are really, really good, and he ended up playing a bunch for us anyway. Because he’s a two-way guy who really takes pride in his defense and can make shots. He’s your classic 3-and-D guy.”

That’s what the Sacramento Kings got when they signed Ellis to a two-way deal night. After Primo and Jones moved on, Ellis moved up. He started all 33 games for the Tide last season, averaging 12.1 points, 6.1 rebounds, 1.9 steals and 1.8 assists. He made the SEC All-Defense team, led the league in free-throw percentage (88.1), ranked fifth in steals and true shooting percentage (61.4) and sixth in box score plus/minus (+9.5). In two years at Alabama, he made 37.1 percent of his 3-pointers.

“He’s a good kid, really into doing what the team needs him to,” Oats says. “He’s a way better help defender than he is a lockdown guy. He was an unbelievable defender when we had Herb. You could kind of match those two and pair them and we had a good system. He wasn’t quite as good when he had to be the primary defender this past year, but still a very good defender. He’s got really good defensive instincts, recovers from mistakes, quick and long. If he gets beat, he can come from behind and block your shot. That became his calling card for us, the way he found his way onto the floor for us that first year, playing defense.”

There are some valid concerns, though. He was listed at 6-foot-6 while at Alabama but only measured 6-3 1/2 without shoes — and had a just-OK 6-8 1/2 wingspan — at the combine. Despite plenty of time to fill out in college, the 22-year-old only weighed in at 167 pounds. That raises questions about whether he’s strong and sturdy enough to last in the NBA. Ellis also isn’t great with the ball. He had almost as many turnovers (86) as assists (93) in two seasons for the Tide.

“You’re not going to put him in pick-and-roll right now. He’s not good enough to do that,” Oats says, frankly. “He’s not a point guard at all. He’s a two in the NBA, a straight two. Maybe he eventually gets to where he can handle it and play in pick-and-roll better, but right now he’s your 3-and-D who can attack a close-out. He’s got to get stronger. He got a lot stronger with us, but he’s got to get even stronger now.”

On the bright side, he rose to the occasion in some big spots for Alabama. That first season, in just his third SEC game, Ellis seized a chance he got to stick it to Florida. He’s from Leesburg, Fla., just 70 miles from Gainesville, but the Gators didn’t offer him a scholarship. “That was kind of his breakout game,” Oats says. “Like, OK, these guys never wanted him and he was going to show them.” And Ellis certainly did. After scoring a total of 23 points in his first nine games for the Tide, he went off for 16 points, eight boards, two assists, two steals and a block in 24 minutes against Florida.

In the SEC title game later that season, with Alabama protecting a one-point lead in a shootout with LSU, Ellis stalked All-SEC guard Javonte Smart from halfcourt all the way to the bucket and swatted his shot with 7.3 seconds left. “That was a championship play,” Oats says. This season, Ellis showed off more of his offensive ability. The game of his life came at Rupp Arena, where he scored 28 points and sank 7 of 10 3s against a top-five Kentucky team. That’s the thing Oats is confident will translate in the NBA.

“I think he’ll make kick-out 3s,” Oats says. “He’s got range. I think he’s definitely going to be a shooter. When you’re not on the floor much, playing limited minutes, it’s hard to be a great shooter. But once he got the defense figured out and could stay on the floor for extended minutes, then when he got called upon, he made shots at a high clip. So yes, he can shoot.”