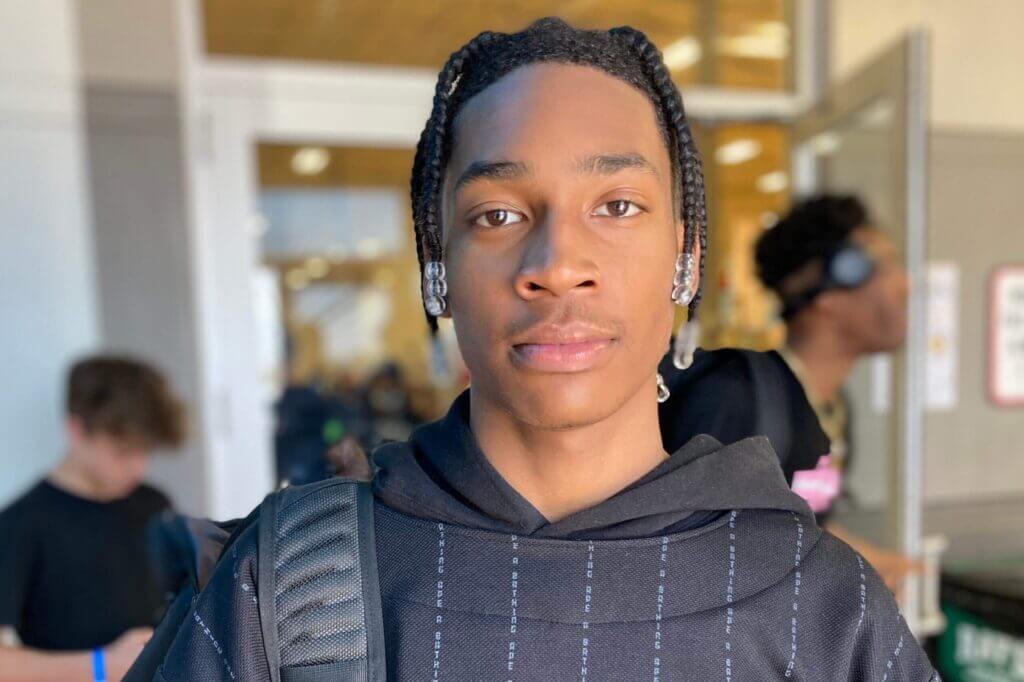 If you were searching for just one word to cover what Kentucky is getting in its latest five-star commit, Robert Dillingham, something like sizzle would work. Or maybe style. Perhaps flash. One might even say panache. Pick a word, any word, that says: You’ll want to watch what happens next. Point being, the 17-year-old human highlight reel who announced his (second) college decision Friday with the help of Kanye West commands attention. Blink and risk missing the show.

His former high school coach, longtime NBA player and UNC alum Jeff McInnis, and his current grassroots coach have both repeatedly compared him to Allen Iverson. Steve Shelton, director of Nike-sponsored Team CP3, disagrees. He thinks Dillingham, a 6-foot-2 playmaker ranked the No. 7 overall prospect and No. 1 point guard in the Class of 2023 per the 247 Composite, plays more like Kyrie Irving. Either is a good comparison. Bottom line: He plays with the ball on a string, shaking and baking to the bucket for a circus finish or rising up out of a killer crossover into a deep 3-point swish.

“He can just really put the ball in the basket in so many ways. He is a creative scorer,” Shelton says. “I’m not saying he’ll be on Kyrie Irving’s level, because I think Kyrie is one of the best layup-makers in the game, flips it in from all different angles, but Rob is very similar in that way. He can finish with both hands, twisting, reversing, so many different angles around the rim. Our head coach says it’s Iverson, the way he moves. Now, is he Allen Iverson-quick? I don’t know, but he’s very quick, gets to his spots, gets his shot off any time he wants to and shoots it great off the dribble. You need one, he’ll get you one.”

Through 13 games this spring and summer, Dillingham ranks third on the Nike circuit in scoring. He’s averaging 19.9 points, 3.2 assists, shooting 52.9 percent from the field, 38.4 percent from 3 on 5.6 attempts per game, and 79 percent from the free-throw line. He led USA Basketball to a gold medal last summer at the FIBA Americas U16 Championship, where he averaged 15.7 points, 6.2 assists and 3.2 steals, scored a U.S.-record 31 points in the championship game and won MVP.

Dillingham first committed to NC State in December but reopened his recruitment in March. Kentucky assistant Chin Coleman, who tried to land him the first time, immediately reached out.

“Just saying he wasn’t going to lose this time,” Dillingham said this spring. “When I went on my visit, they showed me all the guards that went there, all their highlights and stuff, and they were all elite guards. I’m guessing, hopefully, (John Calipari) wants me to be one of those.”

This time, Dillingham chose the Wildcats over fellow finalists Auburn, Louisville and USC. His father, who loudly, publicly objected to him transferring to Kanye’s new Donda Academy in California last year, is in full support of this college decision. Donald Dillingham worried that his son, born and raised in Hickory, N.C., wouldn’t get the same level of education, coaching or competition at a rapper’s start-up school all the way across the country. Donald shares custody, so the decision was not his alone, and he was estranged from Robert for months after his son made the move. But they’re talking again now, and the father is newly hopeful about his son’s future.

“Kentucky is a good fit for him,” Donald says. “I think he’ll do great there with that style of play and coaching. They’re getting somebody real special, a great basketball player, and I think Calipari is a great coach, a great person and mentor for these kids. I think once Calipari gets him under his wing, I’ll feel a lot better about the situation, because he’ll develop Robert into the best version of himself.”

Everyone around Dillingham seems to agree that playing with — and practicing every day against — other great players will be good for him. He joins homegrown five-star guard Reed Sheppard in UK’s 2023 class, and now the Wildcats will try to secure the most talented backcourt in America by adding DJ Wagner, a combo guard ranked as the No. 1 player in the class. Wagner’s father, Dajuan, played for and loves Calipari. But his grandfather, Milt, played at rival Louisville, where he just joined his best friend Kenny Payne’s staff. Some will view Dillingham’s commitment as a sign UK knows it won’t get Wagner, but Calipari remains confident he can land both.

He can point to several examples of ball-dominant, five-star guards not only coexisting but complementing each other in the same backcourt at Kentucky, starting with John Wall and Eric Bledsoe in his first class. Calipari has talked to both Dillingham and Wagner about how they fit together, and Dillingham has said publicly he would welcome that tag team.

“I can’t speak for Wagner, but Rob’s not opposed at all to playing with other talented guards,” Shelton says. “He and Aden Holloway (a top-40 point guard) wanted to play together with us. I think it’ll be good for Rob.”

And if Wagner came and wanted to play point guard, “I think Rob is more of a two guard anyway. He played up with our U17 team a couple times last year and we didn’t have a point guard. We asked if he could and he said, ‘I’d rather slide over to the two.’ I just think he prefers to be off the ball. He still wants it in his hands, of course, but he’s a natural scorer who likes to play from the wings.”

Dillingham picked up the game very early and quite naturally, tagging along with his aunt, who worked at a local recreation center, and an older cousin who was a hooper. Before he was even old enough for kindergarten, he’d play all day against older kids and come home bragging to his father about the ways in which he dominated the big boys.

“I remember saying, yeah, OK, my son tells fantastic lies,” Donald says. “But then in his first game at the YMCA, he scores 16 points. Next game, 16 points. Next game, 30 points. Those little kids score like four, five, six points and that’s big for their age. But Robert was just blowing them away, and I knew something was different, that he was special. I coached him from about 5 until 11 or 12, then I had to take my hands off him and let someone else take over. He was doing stuff I’d never seen before, and at that point, a father can hurt a kid. You can get tunnel vision coaching your own child. I had to let someone else take him further.”

But first, an unforgettable road trip. One of the last times Donald coached Robert — he also coached older brother Denzel, who became an all-conference player at Division II Paine College — their team drove in a van all the way to Miami for a youth tournament. During that long ride, other coaches and teammates told stories about what a legendary trash talker young Robert already was. Donald refused to believe it. “My son don’t talk no junk,” he kept insisting. After all, he would’ve noticed that from the sideline while coaching.

But why? Well, when you’re as naturally gifted as Dillingham is, sometimes you get bored. With a little bit of sizzle, a dash of flash, a pinch of panache, you create your own excitement. If that means jawing at some poor kid you’re already humiliating, so be it.

“The madder he gets, the better he plays,” Donald says. “He doesn’t lose control, but he likes to feel challenged. If the game is too easy, he can’t play. But if he thinks you’re trying to outdo him, he won’t let you. Even if he’s just making that up in his head. He’s just got that edge, that killer instinct in him. Whenever Robert is focused, can’t nobody stop him.”