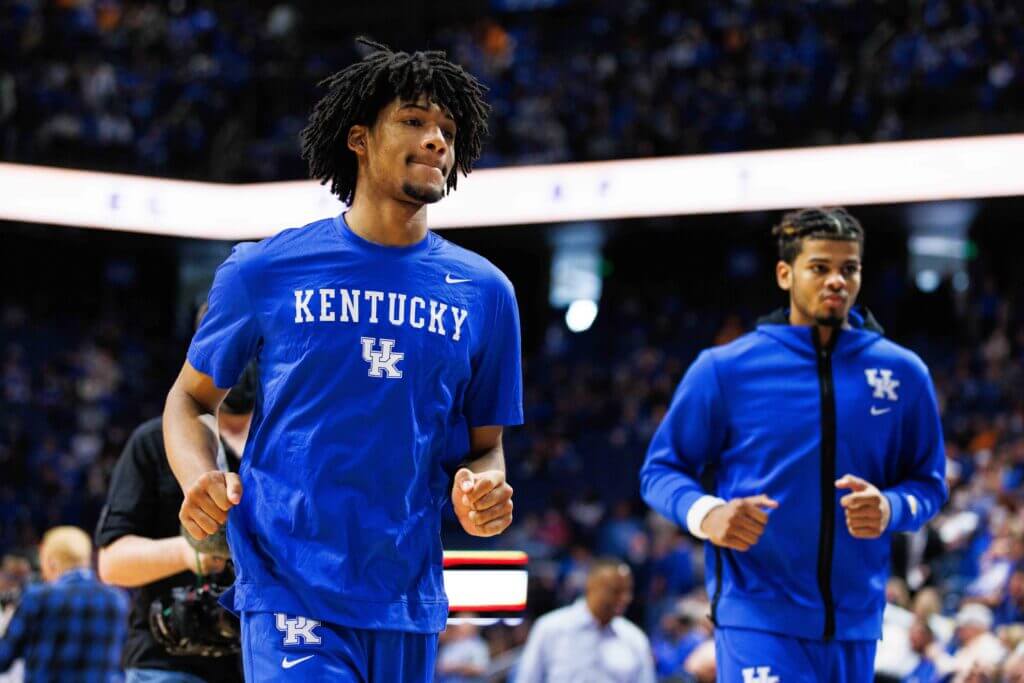 Back when John Calipari was still holding out hope — even in the face of mounting evidence to the contrary — that Shaedon Sharpe and his camp were sincere in their months-long insistence he would play at Kentucky next season, the Hall of Fame coach made a bold prediction.

It’s true that Calipari has coached No. 1 picks: Derrick Rose, John Wall, Anthony Davis and Karl-Anthony Towns. It’s also true that Sharpe, before reclassifying and enrolling midseason at UK in January, was the No. 1-ranked high school player in the Class of 2023. So it’s not exactly far-fetched, and Calipari wasn’t just blowing smoke, his top assistant swears now.

“Just being fortunate and blessed to be around a few guys who had those elite attributes and became No. 1 picks, when you see it, you go, ‘OK, yep, that’s what it looks like. We’ve seen that here before,’” Orlando Antigua says. “Shaedon is really that talented. He’s got unbelievable ability. He’s athletic, he’s explosive, he can really shoot the ball and I think he can be an elite defender. He’s legitimately talented, man.”

Antigua is saying it that way — like a guy who got the advance screener and is reassuring the masses that this super-hyped movie nobody has seen is actually good — because Sharpe is the biggest mystery in the 2022 NBA Draft. What did the Portland Trail Blazers get when they picked Sharpe seventh on Thursday night? Maybe a future star, or maybe a guy who was afraid to play and expose himself for a reason.

Sharpe’s rise was rapid, from fringe top-100 prospect to No. 1 in his class in the span of a year. The last time anyone saw him play competitively against other high-level prospects was on the Nike EYBL circuit in the summer of 2021, and Sharpe was terrific. He averaged 22.6 points, 5.8 rebounds, 2.7 assists and shot 36.4 percent from 3-point range on a high volume. The 6-foot-5 guard with a 6-11 1/2-inch wingspan, 4.8 percent body fat and a 40-plus-inch vertical was an elite shot creator against fellow high school-aged players, leading the EYBL in points off pull-ups and rating as the league’s second-best finisher at the rim.

Back then, everyone felt like they had a pretty good handle on Sharpe and his trajectory. But then he pulled a surprise, announcing in November that he planned to enroll early at Kentucky, practice with the team but not play in the second half of last season, then lead the Cats as a redshirt freshman. The company line was: He’s only 18 (he turned 19 in May) and needed time to get in shape and acclimate to college. Then came buzz that he was doing eye-popping things in practice and might play after all, if Kentucky needed him. Then official word came that no, in fact, he wouldn’t — even as UK did need him with a backcourt decimated by injury. It was a hard pill for fans to swallow when the Cats limped to a first-round NCAA Tournament exit while a healthy Sharpe sat on his hands (after a few windmill dunks in warm-ups).

The silver lining all along the way, though, was Sharpe and his advisor, Dwayne Washington, never wavered on their public commitment to him playing for Kentucky in 2022-23. Saying that while simultaneously assuring NBA front offices he planned to be in this draft did not do Sharpe any favors with Big Blue Nation, but it also created a cloud of doubt in NBA circles. The lack of actual five-on-five basketball he played in the pre-draft process since then only added to the uncertainty. What’s he hiding? Does he love to compete? Is he a good teammate? Can we trust him?

“There is mystery,” Sharpe acknowledged recently, “just because I haven’t played for about a year now. The last game was high school, so I feel like there is curiosity and mystery for me. But I’m just in the gym getting ready.”

At least Sharpe is finally speaking for himself, but maybe that’s not a good thing either. A shy, quiet young man, he happily let others do the talking for him while he was at Kentucky, which actually afforded him some cover. Maybe Washington was pulling all the strings and this poor kid is just getting bad advice. Or maybe not.

“It was my decision not to play,” Sharpe said last week. “Everything happens for a reason, so I really don’t regret not playing. I’m working out for NBA teams now, so I guess I did something right.”

Well, then. And it got bolder. In his estimation, the learning curve in jumping from high school to the NBA versus college to the NBA is “about the same.” Asked to envision how his career will unfold: “I see myself being one of the greatest players ever to play the game of basketball.”

Strengths include extreme confidence, it seems. The issue there, of course, is that becoming one of the greatest to do it will require Sharpe to actually do it. To play. Those lucky few who’ve seen glimpses of him in the last year swear that he can. Now we’re all about to find out.

“Some of the dunks are going to be crazy,” Antigua says. “And he can really shoot that thing — with range, brother. It definitely would’ve been good for him to come back. It would’ve really helped him get ready to make that jump. But you understand why he felt like he had to go, so at this point you’ve just gotta root for him and wish him the best. He jumped in the deep end. Go swim, kid.”

Greek state TV broadcasts advice on how to siphon gasoline