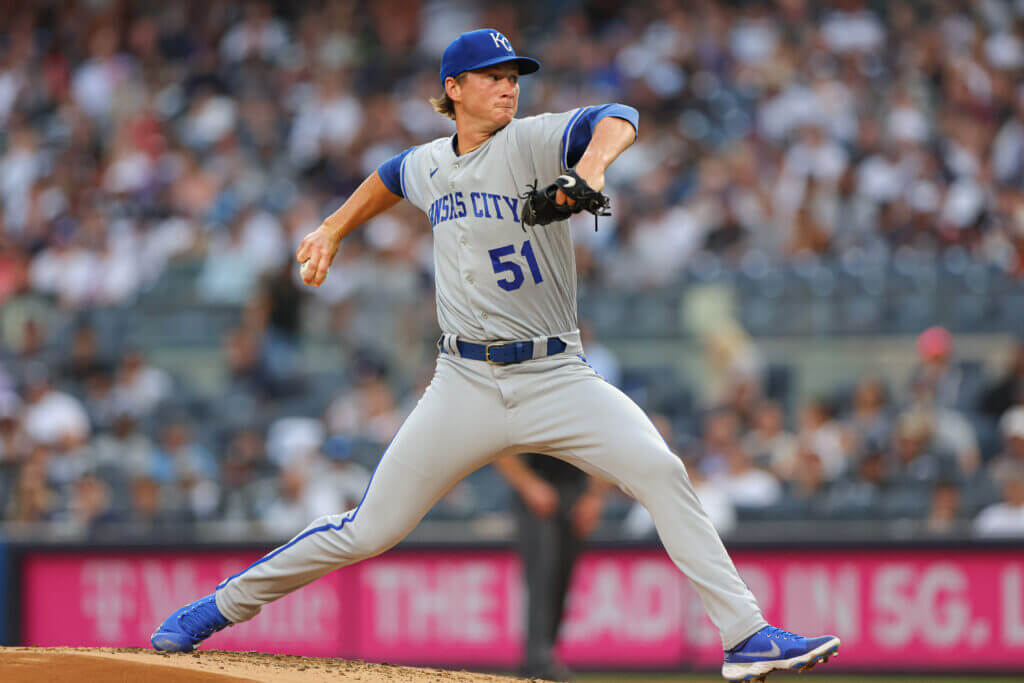 The images of two young Royals pitchers emitted two distinct vibes — one assured, another unsure. The images, in a way, define the Royals’ July.

The month offered a bevy of reasons to believe in what might be possible in 2023. It also evoked uncertainties.

We’ll get to both sides of the coin shortly, what is evident right now and what is not, but first, here is what manager Mike Matheny had to say before Sunday’s 8-6 Salvador Perez-put-the-team-on-your-back thriller of a victory to avoid a Yankees four-game sweep.

“We focus on what the overall look is,” Matheny said. “The overall style of play. We made some mistakes (this weekend) that have hurt us. But, for me, I always just want to keep making sure I keep pointing out things that guys are doing right. And in the meanwhile, what are the things that are keeping us from being a winning club overall?”

To use Matheny’s verbiage, nothing has been more “right” recently than Singer’s spectacular stretch. Before his historic outing Thursday night at Yankee Stadium, he had put together one of his career-best months, posting a 2.66 ERA (2.91 FIP) in 23 2/3 innings. He himself attributed his consistency to an aggressive mindset, unlocked with the help of pitching coach Cal Eldred, who identified a fix with the tilt on his fastball. Singer’s success has also been boosted by his comfort throwing a third pitch: the changeup.

His performance, in general, provided the most overwhelming indication this season of an objective Royals president of baseball operations Dayton Moore discussed before the season: “It’s time for a lot of our (young pitchers) to start taking some steps forward.”

How sustainable are Singer’s results? Any skepticism surrounding that answer dissipated after Thursday night’s stupefying outing. That night, dotting his sinker and slider, Singer became the eighth pitcher ever with seven-plus shutout innings, one hit or fewer and 10-plus strikeouts against the Yankees. He did so within the electric swirl of a more-than-40,000-person crowd, and against a lineup of veteran hitters such as all-world talent Aaron Judge, who spent the postgame praising Singer’s showcase.

From a macro perspective, only 25 other starters this season have matched Singer’s more than nine strikeouts per nine innings and fewer than 1.2 walks plus hits per innings pitched. Some of the other names who made that list: Gerrit Cole, Dylan Cease, Corbin Burnes … and you get the point. Singer’s stuff has been ace-ish, and for a team desperately needing to see progress from their homegrown starting pitchers for a successful 2023, this has been a beautiful sight.

Sticking with the rotation before we get to the bullpen and the lineup and the leadership, it makes sense to shift to Kris Bubic, who, similar to Singer, has established a recent sample size of steadiness. In 35 2/3 innings in July, Bubic posted a 3.28 ERA (4.80 FIP). Notable in Bubic’s alterations is his curveball usage, specifically against righties with the first pitch and in even counts. He has also improved the command of his fastball as well as its shape, meaning its ability to carry its plane and not drop, making it harder for the hitter to correctly angle their barrel.

For a visual, here’s the fastball Bubic struck out Yankees catcher Kyle Higashioka with Friday night:

Unlike Singer, however, some of the advanced metrics seem more skeptical about how capable Bubic may be at continuing this current run of impressive outings. In July, for example, hitters had a .248 batting average on balls in play against him (MLB average is .294). Left-handed hitters, in general, also posted a 1.006 OPS against Bubic during the month, hammering both his fastball and changeup. Still, Bubic’s ability to navigate the Toronto Blue Jays, Tampa Bay Rays and New York Yankees in three consecutive starts offers another reason to believe for next season.

Among the remaining young starters, Royals left-hander Daniel Lynch is tracking toward a return. His July was marred by two different blisters on his finger. Right-hander Jackson Kowar was recently optioned. “I want him to continue to develop to the point of having confidence in his other pitches,” Matheny said, “and realizing he’s going to need all three.” Right-hander Jonathan Heasley was also optioned. “There were a couple of things mechanically that Cal Eldred and (bullpen coach) Larry Carter wanted to see him do that are going to help him,” Matheny said.

The Royals’ bullpen for 2023 should feature many of the current faces, though, per multiple sources, opposing teams have been eyeing many of the Royals’ relievers. The group as a whole posted a 4.02 ERA in July (4.36 FIP), but as has been an issue all season, the group ranked 29th in walks per nine innings. Adding reliability in the form of development and acquisitions will be essential for the club to make strides next season.

If it sounds like there is a major onus on the pitching, that’s because there is … and has long been.

Meanwhile, as Sunday’s outpouring at Yankee Stadium confirmed, the lineup has morphed into a formidable shape. The Royals have damage-oriented hitters in Perez, Bobby Witt Jr., MJ Melendez, Vinnie Pasquantino and Nick Pratto, some of whom also possess elite plate discipline characteristics. (See: Melendez’s 10-pitch walk late in Sunday’s game against changeup-extraordinaire Ron Marinaccio.) Others such as Michael Massey and Maikel Garcia have also debuted and impacted games with their bats. In July alone, without Perez, arguably their most threatening hitter, the lineup posted a 103 wRC+, ranking 16th in MLB.

Ahead of next season, the major questions with the lineup revolve around the positional fit for each player. Who will play third base daily? How about left field and right field? And, if center fielder Michael A. Taylor departs ahead of the deadline or this offseason, who will fit that bill?

Of course, there is also the question of leadership within the clubhouse. Once Alex Gordon departed, Royals two-time All-Star Whit Merrifield ascended to be that voice. With the deadline looming, it feels fair to ask: If Merrifield is moved, who will the group follow? Can the boisterous Nicky Lopez slide into that role? How about the personable Pasquantino? Regardless, it’s a question the club’s executives must weigh, even if general manager J.J. Picollo said recently: “Just being in that clubhouse and being around it, it didn’t feel different to me; there was no concern on our end.”

As the final day of July proved, Perez’s presence should aid any transition period.

With 2023 forthcoming, and July 2022 simultaneously offering up questions and answers, it’s easier to lean positive when a team has a warrior as its franchise cornerstone; a player who already knows what it takes to win in Kansas City.

Ceremony and celebration at the 2022 Garma festival – in pictures