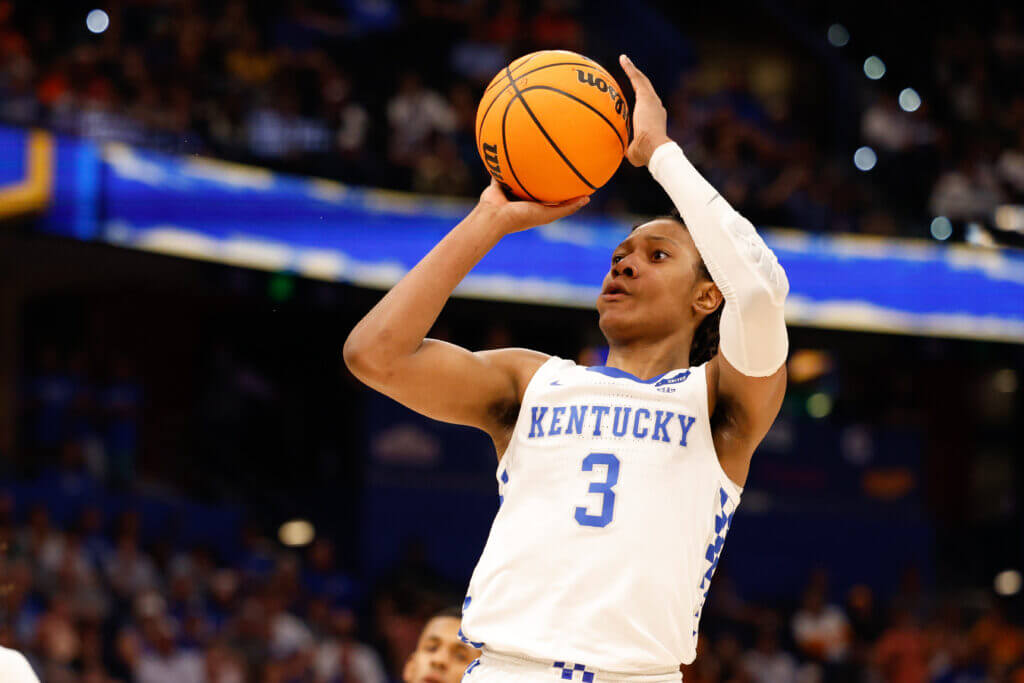 On the eve of the SEC tournament in March, TyTy Washington’s father shared a secret that he didn’t want revealed until the season ended.

“He’s still hurt,” Tyrone Washington said then. “I can tell. He stands up and kind of gallops when he’s not OK. I can see in my child that something ain’t right. He plays off adrenaline, but you can tell it’s a gimpy ankle. I know he’s not going to sit, though. As long as he’s helping the team in some way, he’s going to play through it. We ain’t built to sit down. We ain’t built to say, ‘Well, the NBA Draft.’ I don’t care about that. You came here to win a championship.”

But with Washington playing on a bum ankle, functioning at what his dad estimated was about 80 percent, and with the rest of Kentucky’s backcourt similarly banged up, the Wildcats did not win a championship. Washington managed one last gasp, scoring 25 points in the SEC quarterfinals, 17 of them in 12 minutes after John Calipari very publicly challenged him, but the Wildcats lost in the semis. Then they suffered a stunning upset against Saint Peter’s in the first round of the NCAA Tournament, where Washington looked like a shell of himself in a 2-of-10 shooting performance.

The 6-foot-3 combo guard’s first and last impressions in a UK uniform were forgettable — he began the season with a 3-of-14 night against Duke at Madison Square Garden — but Washington did a lot of really impressive things in between. And the fact that he played at all those final few weeks earned everlasting respect from the Cats’ coaching staff.

“It speaks to his toughness, because he worked through a lot to make sure he was out there to compete for his boys,” assistant Orlando Antigua said. “I don’t think he ever got back to being himself. You look at his balance, see how he started almost shooting off one leg, never coming down on two feet, just the small things we started to realize and go, ‘Man, he’s just trying to gut it out for his teammates.’”

That’s the kind of guy the Houston Rockets are getting after picking Washington 29th in the 2022 NBA Draft on Thursday night. But what kind of player are they getting? His injuries make that a little tougher to say for sure.

Here’s what we know: He rolled his ankle for the first time in a loss at No. 1 Auburn on Jan. 22 — where Washington and Kentucky had gotten off to a roaring start and looked like the better team until he went down — then rolled it worse in a win over Florida on Feb. 12. He tried to rush back for a huge game at Tennessee three days later, only to crumple to the court in Knoxville and be helped off in considerable pain. That finally forced him to shut it down for 10 days, but he was back again for that doomed stretch run.

“I want to show everyone in the world that I’m a winner first,” he said, “that I’m a team guy always.”

When healthy, Washington gave us glimpses of his best self. He stepped in for injured point guard Sahvir Wheeler against Georgia and casually dropped 17 points and 17 assists, breaking John Wall’s single-game UK record without really breaking a sweat. A week later, he torched Tennessee at Rupp Arena with 28 points on 10-of-13 shooting against the top-rated defensive team in the country. A week after that, the first ankle roll.

“If people stopped buying his stock after the injury stuff, they’re going to be really pleasantly surprised,” Antigua said. “You’re getting a really good guard who can play on the ball or off, has a great IQ, great feel for the game and has the ability to go get his shot off. One of the things people are going to see is how good he can shoot the 3. He can space the court, he can deliver the ball, he can run your team and he’ll defend, but people in his workouts have been blown away by how well he shot it. That was the comment we got back from everyone who brought him in.”

Washington isn’t a great athlete and doesn’t have any freakish measurables. What the 20-year-old does have is craftiness, a polished midrange game and just enough doubters now to achieve sleeper status. It’s hardly unheard of, by the way, for a one-and-done guard from Kentucky to blow up in the NBA after modest college production. Devin Booker, Shai Gilgeous-Alexander, Tyler Herro and Tyrese Maxey have all been much bigger deals as pros than they ever were in Lexington. The common thread was a fire to prove themselves.

“TyTy has that inner drive,” Antigua said. “Like, he’d get mad at us about the matchups, wanting to defend the other team’s best. That’s something we usually charged Sahvir with, but TyTy wanted to be that guy. He’d raise his hand and say, ‘Let me.’”

Malaki Branham scouting report: Meet the Spurs pick at No. 20

What Caleb Houstan brings to the Orlando Magic: ‘I can play with a lot of people’