A degree of persistent uncertainty hung over the Red Sox in the days leading up to the trade deadline.

Would chief baseball officer Chaim Bloom keep his word and not trade Rafael Devers or Xander Bogaerts? What about the other pending free agents? Would the club sacrifice the present to add for the future? Or would help be on the way to boost this roster’s chances at a wild-card spot?

What was worth it?

After shaking the Magic 8 Ball for the last several days, the answers finally appeared as Tuesday’s 6 p.m. ET deadline passed.

The Red Sox shipped out left-hander Jay Groome, once the organization’s top pitching prospect yet one who’d been derailed by injuries, in the Hosmer deal. And they added four mid-level prospects in return in infielders Enmanuel Valdez and Max Ferguson and outfielders Wilyer Abreu and Corey Rosier.

On the monetary side, the Red Sox were able to get out of the two-year deal they’d signed with Diekman in the spring by sending him to the White Sox in exchange for McGuire. More significantly, the Padres took on $44 million of the remaining $46 million of Hosmer’s salary, giving the Red Sox an upgrade at first base on offense and defense for essentially the cost of Groome.

Bloom had argued he wasn’t going to sell just for the sake of it, hinting that there were deals the front office considered for both J.D. Martinez and Nathan Eovaldi, but not ones that made sense in the context of each player’s worth.

“If you had asked me last night I would’ve thought we would’ve made more moves than we did,” Bloom said on Tuesday evening. “The way the day unfolded, the way we looked at opportunities in front of us, at the end of the day we didn’t want to force anything.”

Manager Alex Cora seemed pleased with the overall outcome, and perhaps a bit relieved, after a stressful few days. Despite losing Vazquez, a key leader in the clubhouse and productive bat in the lineup, the team remained largely intact.

“For how down we were yesterday (about Vázquez), there’s a lot of people excited in the clubhouse keeping some of these guys to make a push,” Cora said. “We know where we’re at, we know how we played in July but to turn the page to get this over with and just go out there and perform, I think we’re going to be OK.”

So what does all this mean for the roster going forward?

In addition to the trades, the Red Sox made a series of roster moves on Tuesday. Rafael Devers returned from the injury list after missing 10 days with a hamstring strain. Pham and McGuire joined the team in Houston and catcher Ronaldo Hernandez and first baseman Franchy Cordero were optioned to Triple-A Worcester. Outfielder Rob Refsynyder was placed on the injury list with a right knee sprain retroactive to July 30. Hosmer is expected to join the Red Sox when they begin a four-game series in Kansas City on Thursday.

Hosmer, a left-handed batter, hit .272 with a .727 OPS in 90 games for the Padres this season and will offer an upgrade both offensively and defensively at a position the Red Sox have struggled at all season. The 32-year-old four-time Gold Glove winner has seen his defense slip the last few seasons, but his -1 DRS (defensive runs saved) at first base should solidify the spot over Cordero (-3 DRS) and Bobby Dalbec (-5 DRS). Hosmer figures to get a majority of the playing time at first, with Dalbec coming off the bench.

Bloom noted that acquiring Hosmer, who has three years remaining on his deal, doesn’t change anything about how the organization views first base prospect Triston Casas. Casas returned after the All-Star break from two months on the injury list with a high ankle sprain. Casas, who’s also a left-handed hitter, got off to a slow start in his first week back at Triple-A Worcester, but over the last four games he’s gone 6-for-17 (.353). Still, the Red Sox have maintained they want Casas to develop via consistent playing time at Worcester after his season last year was interrupted by playing for Team USA and the lengthy injury stint earlier this year.

“Triston’s timetable is going to be determined by Triston,” Bloom said. “Especially in a place like Boston, but really anywhere, you never want to have to bring a prospect to the major leagues out of desperation, or because of a need. You want it to be because a player is really ready … This doesn’t mean anything as far as how we feel about him or his future and what he can accomplish. We think he’s going to be a huge part of our future. Just one more thing that allows us to do right by him and let him develop at his own pace.”

Meanwhile, in addition to Hosmer, Pham could offer a different element to the Red Sox lineup over the next two months. Cora highlighted Pham’s patience at the plate; his 42 walks on the season would put him ahead of any current Red Sox hitter. Primarily a left fielder, Pham will stick in left field with Alex Verdugo moving to right field, where he played for roughly half of the shortened 2020 season. Jackie Bradley Jr. and Jarren Duran will share time in center and the club is hoping Kiké Hernández will return some time in August after he has started ramping up activity following hip inflammation and a PRP injection.

As for the catching situation, McGuire will share catching duties with Kevin Plawecki. But Bloom admitted it will be a difficult transition for a pitching staff that relied heavily on Vazquez.

“That is a concern,” Bloom said. “It’s something we talked about a lot, whether contemplating moving either of our catchers that we had or bringing new guys in from the outside. It is a concern. I think we tend to underrate that in this business of how important that aspect of catching is.”

Bloom added he thinks Plawecki’s consistency in knowing the staff will help McGuire while also noting game planning coordinator Jason Varitek plays a significant role in preparing the staff as well. Still, Vazquez’s knowledge of the staff and their tendencies could be an important absence down the stretch as the Red Sox ramp up Plawecki’s playing time and get McGuire acquainted. 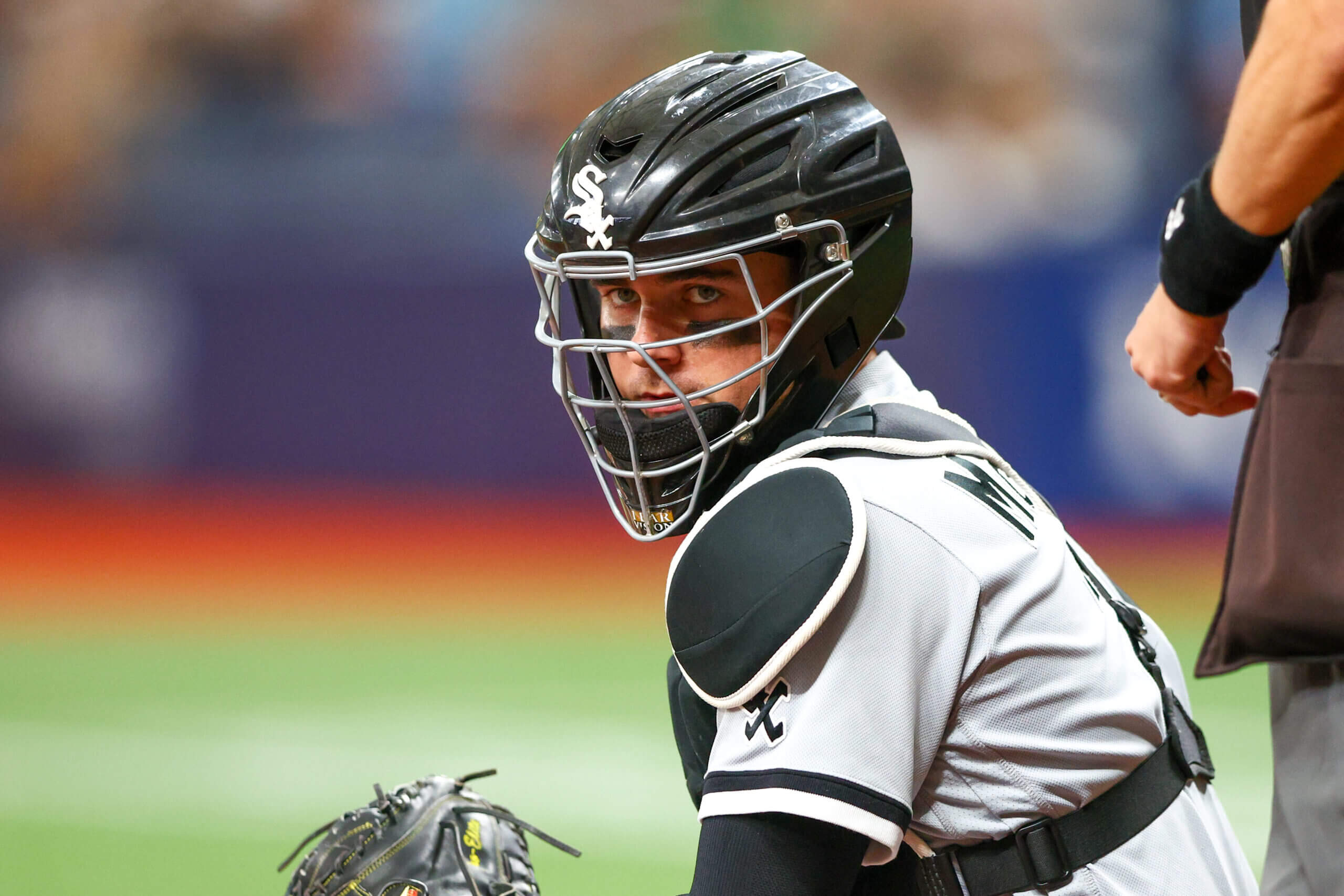 As far as the prospects the Red Sox acquired, the four players offer some intriguing upside and add more depth to the system, but aren’t big-name prospects. In the Vazquez deal, the Red Sox got a pair of left-handed hitters in Enmaunel Valdez and Wilyer Abreu. Valdez ranked No. 12 in the Astros system, according to Baseball America, but The Athletic’s Keith Law was more bullish on Abreu, saying he is “by far the better of the two”. Abreu hit .249 with an .858 OPS along with 23 stolen bases in 89 games in Double A this season. It’s likely he’ll report to Double-A Portland.

Valdez, who has already reported to Triple-A Worcester, hit .327 with an 1.016 OPS, powered by 21 homers and 26 doubles in 82 games between Double A and Triple A this season. A bat-first player, there are questions about his long-term defensive positioning, but he’s spent a majority of his games at second and third base this season, while also logging innings in the outfield.

In the Hosmer deal, the Red Sox acquired infielder Max Ferguson and outfielder Corey Rosier. Baseball America ranked Ferguson the No. 23 prospect in the Padres system in their midseason report.

Rosier, a left-handed hitting outfielder, was drafted in the 12th round in 2021 by the Mariners and was traded in the offseason to the Padres as part of a deal for Adam Frazier. Another player with significant speed, Rosier had 33 stolen bases in 85 games at High A this season while hitting .263 with a .777 OPS, 14.5 percent walk rate and an 18.2 percent strikeout rate.

Even with so much roster maneuvering, Bloom did confirm that the Red Sox are “trending to be over” the $230 million luxury tax threshold at the end of the year. If it had been a priority to dump salaries to get under the threshold, Bloom undoubtedly would have done so.

Bloom maintained his goal was to add to the current group for a playoff push while still building for the future, and it seems like he did both, even if the outcome wasn’t perfect. Whether or not he made the right decisions? Well that remains to be seen.

“We wanted to give this group a chance at the postseason,” Bloom said. “I do think they have that chance. People who felt this group was good enough to make a run at it a few days ago, in my opinion, should still feel that way. This group looks a little different, but I don’t think it’s any less talented. Depending how you look at what we did, you could say it’s more functional, especially with the stability we hope now to have at first base. At the same time, we always need to make sure we’re not walking past opportunities to add young, impactful talent that can be part of our core to the organization.”