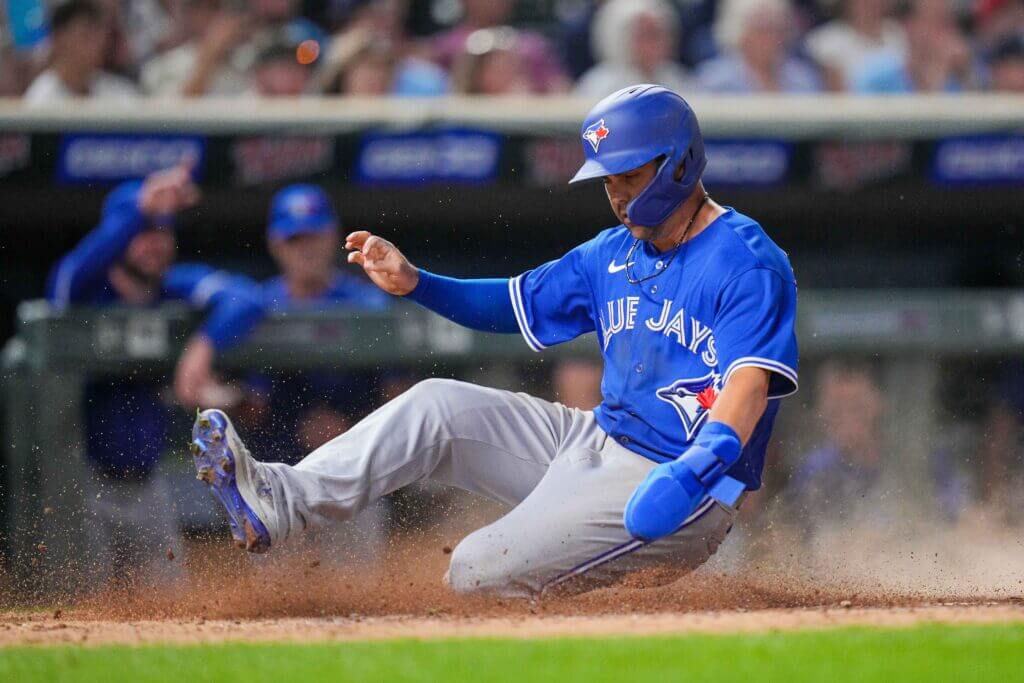 MINNEAPOLIS — Sitting in the visitors’ dugout at Target Field, Whit Merrifield knew the question would be coming.

Last month, Merrifield was one of 10 Kansas City Royals players who did not make the trip to Toronto because he hadn’t received the COVID-19 vaccine, which is required for visiting travellers entering Canada. (The same rule applies to the United States). That’s why when he was acquired by the Blue Jays minutes before the trade deadline on Tuesday, there was some initial puzzlement about the trade. Would the Blue Jays’ newest utility player even be eligible to play in Toronto?

When asked about Merrifield’s vaccination status following the trade, neither Blue Jays general manager Ross Atkins nor manager John Schneider divulged details, choosing to let Merrifield speak on it when he reported to the team.

So, on Thursday in Minneapolis, wearing his new Blue Jays threads, the question was asked.

Have you received the vaccine?

Can you tell us when you had it just so we have a general timeline of when you will be able to come to Toronto?

“I’ll be in Toronto when the team gets to Toronto,” he said.

So, that settles that. When the Blue Jays return to Toronto for a series against the Cleveland Guardians on Aug. 12 at the Rogers Centre, Merrifield will be there with his new teammates.

“It was something that I probably could have handled a little better, but what’s happened happened,” he said when asked about the backlash he received when he didn’t travel to Toronto with the Royals. “I’m excited to be a Blue Jay, I’m excited to get to Toronto and play in the Rogers Centre as my home.”

Merrifield went 2-for-5 in his Blue Jays debut in the team’s 9-3 win over the Minnesota Twins at Target Field. Blue Jays starter Alek Manoah pitched six innings, battling some of his command with four walks, but limited the damage to two runs on two hits and, yet again, avoided serious injury when he was caught in the arm with a comebacker for the second start in a row. A six-run eighth inning from Toronto’s lineup busted what had been a one-run game wide open, with the lineup batting around and capping it off with a three-run home run from Vladimir Guerrero Jr.

Along with Merrifield, all the other trade deadline additions joined the Blue Jays on Thursday. Anthony Bass pitched in the ninth inning in the rout, working around a home run to retire the side.

“I think they’re gonna fit right in perfect and we have a really fun team and a really good clubhouse, so hopefully that environment will allow them to feel comfortable and obviously they’re all studs,” Manoah said.

But back to Merrifield. With his vaccinated status out in the open, we can now turn to other subjects concerning the 33-year-old, such as after years of his name swirling in trade rumours with the Royals, how did he react to actually getting dealt from the only team he’s ever known?

“I didn’t expect it to be as tough as it was,” he said. “But saying goodbye to a lot of those guys, a lot of players that I spent the majority of my career with, it was more emotional than I thought it would be, for sure. But it’s part of the game. It’s part of the business. But it doesn’t mean it’s easy.”

As hard as it was to leave Kansas City after 13 years with the organization, Merrifield also couldn’t hide his excitement about joining a Blue Jays team that’s been one of the hottest in baseball since mid-July. They are in the top American League wild-card spot and the expectation is they’ll be in the postseason race till the end of the season.

“When you play against certain teams from the outside, there are teams that come in that you just feel the energy from. This is one of those teams just from top to bottom, it’s just exciting baseball and I’m excited. I said ‘excited’ a lot, but I’m excited to be a part of this thing.”

On his first day with his new team, Merrifield was thrust right into the action, playing centre field and batting eighth. George Springer was back in the lineup, but as the designated hitter, which left Merrifield patrolling the centre of Target Field. While he’s only played the position six times this season — and 76 previous games over his career — he said it was actually the position that “came the most natural to me,” explaining he played it while in college.

With Springer continuing to manage a sore right elbow, the Blue Jays may utilize Merrifield’s athleticism in centre field often, but the expectation is that he’ll also move around the diamond, playing the infield as well.

His speed, which he displayed a few times Thursday, is also expected to be an asset for a Blue Jays team that’s looked far more aggressive on the base paths since Schneider took over as manager.

Added Merrifield: “I feel like this is a ball club that kind of fits into my game — action, excitement, versatility. Guys out there like to hit, like to swing the bat … and feel like that’s sort of my game. So hopefully they welcome me and hopefully, I can step right in and help us win games.”

It’s been a strange season for Merrifield. Normally a high-contact hitter, he’s put up some of his career-worst numbers. Entering Thursday, he was hitting .240/.290/.352. But he at least had a strong month of July, hitting .286/.345/.481 in 20 games. Following news of his trade, his former teammate Zack Greinke sent Merrifield a text of a tweet that looked at how Merrifield’s statistics compared to his expected numbers, suggesting he should have better results. At first, Merrifield was a bit confused, but when he saw Greinke later, the starter explained the reasoning behind his message.

“I was like ‘Zack, I got your tweet, what’s up?’ He goes, ‘Yeah, man, I just want to let you know that you’re a good player even if sometimes the numbers don’t show it,’” Merrifield said.

With the Royals, Merrifield enjoyed seasons of individual success — he was a two-time All-Star including in 2021 when he played in the game with several of his new Blue Jays teammates — but he’s never played in the postseason or even been part of a playoff chase down the stretch.

“I’m so excited about it,” he said. “It’s not something that I’ve been able to be a part of this late in the year. And I don’t honestly know what that’s like, I don’t know what to expect. Just talking to Bradley Zimmer in there, I’m so excited. I don’t know what to expect. It’s going to be a lot of great energy, great enthusiasm, playing games for a purpose to win and to further the season into the fall is something I can’t wait for.”

Shortly after Merrifield learned he was heading north, he texted his friends and former Blue Jays players Ryan Goins and Justin Smoak, who told him that he’d love his new home, which he’ll arrive at next week.

“I love the city, couldn’t love the city more. The first time I went there, I’d heard people talk about how much they loved it, it’s an incredible city,” he said. “I’ve only been on the opposing side and had some choice words thrown my way, and so I’m excited to be on the other side.”