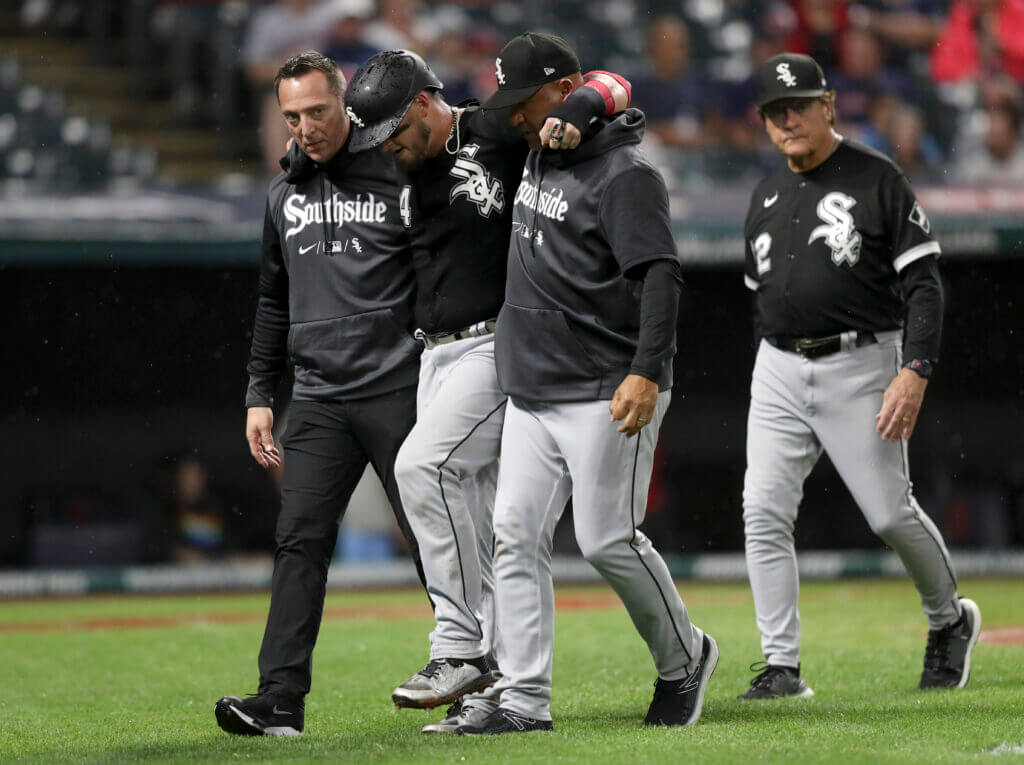 Further examination of White Sox catcher Yasmani Grandal’s left knee revealed no acute damage to the ligament, tendons or cartilage around the knee. He is dealing with inflammation caused by hyperextension and will progress as tolerated. Grandal is projected to return to play in 10 to 14 days.

Grandal was helped off the field with an injured left knee in the seventh inning of the White Sox’s 2-0 win over the Cleveland Guardians on Saturday. He was on crutches after the game.

Grandal looked Saturday night like he might have suffered a major injury with a lengthy rehab process that possibly would have forced the White Sox to revisit the future of their catching depth chart as he enters the final season of a four-year deal. Instead, their starting catcher is on track to return in two weeks. Obviously, that’s great news for Grandal and less of a jarring blow to the franchise and their current core, but its immediate impact is harder to figure.

The Sox are bringing up catcher Carlos Perez from Triple-A Charlotte to Cleveland for Sunday’s series finale against the Guardians. Perez will back up Seby Zavala.

Grandal, one of the slowest runners in the game, was on second when third base coach Joe McEwing waved him home on Elvis Andrus’ first hit as a White Sox. Cleveland centerfielder Myles Straw’s throw was off the mark but catcher Luke Maile lunged down the third base line to tag Grandal. Grandal was hurt trying to avoid the tag. He lay on the dirt clutching his left knee in pain.

There were no outs when Grandal was waved home by McEwing. Manager Tony La Russa spoke on McEwing’s decision postgame on Saturday.

“I don’t think you can blame Joe.” La Russa said. ” He got hurt, so you can say ‘ I shouldn’t have sent him.’ And he’s kicking himself. We all went individually when we found out, and I talked to (McEwing) too: ‘ You had to send him, that’s just a freak thing that happened.”

Grandal is having one of his worst seasons slashing .203/.307/.259 with three home runs in 79 games.  Statistically, Grandal is being outplayed by his backup, Zavala. He has attributed his offensive struggles to slow progress in getting his legs up to full strength after offseason surgery on his right knee and back spasms in June.

For a Sox team that’s fighting for their playoff lives, it’s already been a complicated matter to give Grandal regular at-bats in the hope of eventually seeing his offensive potential realized, while trying to give themselves the best chance to win games. Now that project will begin anew two weeks later into the season they are trying to salvage.

It is better that Grandal did not suffer a career-altering injury. How that will affect the White Sox win-loss record is hard to precisely square.

The rise of vertical farms: could indoor plant factories be the norm in 10 years? | Environment

'We lost it in the first 20 minutes': Tuchel rues Chelsea errors in defeat by Leeds – video