England are European champions. It will take some time before the nation comes down from the high of a first major tournament win since 1966 and for the fact to properly sink in.

But football never sleeps and in a matter of weeks, the Women’s Super League will begin to whirr into life for a new season that is likely to be more competitive than ever. Arsenal and Manchester City will be on a mission to knock champions Chelsea off their perch, Manchester United will look to break into the top three and those below will hope to close the gap on the big guns.

As 20 of England’s 23 triumphant players return to the domestic league for the new season, they will hope to do so having changed the game for the better with their historic win under Sarina Wiegman.

Change has been gradual but steady since the inaugural WSL in 2011 and improvements to facilities and accommodation have started to come organically from clubs — but the picture is not perfect just because England have won a tournament.

The big talking point to stem from the European Championship, and indeed every surge in interest that has followed England’s progress at major tournaments in the last seven years, is how big crowds are likely to be when players line up on the opening day of the WSL season on September 10.

Interest on big occasions is clearly there — the 87,192 attendance for the Euro 2022 final against Germany and the 49,094 fans who watched May’s FA Cup final between Chelsea and Manchester City is evidence of that — but will last season’s average attendance of 1,931 fans be obliterated?

The FA and players will hope so and a trickle-down effect will be essential to boost the second-tier attendance average (553 last season). In the Women’s Championship, the largest crowd of the season was 5,752 in a match between Bristol City and Blackburn Rovers at Ashton Gate.

Bigger crowds are likely to be the most noticeable marker of change from the outside and were one of the first things Lionesses captain Leah Williamson called for after the Euros victory on Sunday. The reasons are simple: more fans in stadia means more interest and more interest means more investment. Most of all, more tickets sold means more opportunities for these elite athletes to thrive on the stage they deserve. They are European champions, after all.

The early signs are that it will happen. More than 7,000 tickets have been sold for Arsenal’s north London derby against Tottenham Hotspur at the Emirates Stadium in September while Chelsea’s season tickets have sold out for the second season in a row.

At Brighton & Hove Albion, there has been a 249 per cent increase in season ticket sales. Manchester City have sold a record number. News of England’s upcoming international friendly with the US at Wembley prompted ticketing chaos, with nearly 40,000 people in the ticket portal queue once general sale became available.

There are plans for Liverpool and Manchester City to play at Anfield and the Etihad Stadium, part of the FA’s ambition for the growth of the league alongside increased exposure on TV following a landmark deal between the league and Sky Sports and the BBC last season.

A stumbling block could come in the timing of fixtures over the coming months. Manchester City host Arsenal at their Academy Stadium on Sunday, September 11, at 7pm for example — a far-from-ideal slot for TV or in-person spectators.

“That’s been one of our key strategies for the WSL to grow — having these big tentpole moments and then adding more and more of those to it,” said FA chief executive officer Mark Bullingham. “Playing in a big stadium is critical. I’m sure we’ll have more and more games at Wembley as well — we really want to get the Lionesses there and have those good moments like the Euro final.

“That’s how you reach new families, and you give them a great experience, and then they want to come back. We’ve had about 575,000 people come to this tournament and that has blown all records out of the water. But we now need to transfer those numbers to the WSL. That’s the challenge and we think they’ve had such a good time that they will. That’s been our strategy and the clubs have been really supportive.

“It’s an economic challenge for them but in the long term, it’s going to be an economic benefit and they all know that. They’re getting behind it and the clubs are investing more and more coming on the journey.”

When it comes to attendances and finding the right venues for matches, the WSL is learning as it goes and there will be debate about whether smaller sold-out grounds versus men’s stadia not full to capacity will be the right step forward. And the link between the women’s game and Premier League men’s outfits affects the behind-the-scenes reality of life as a professional for players at WSL level. 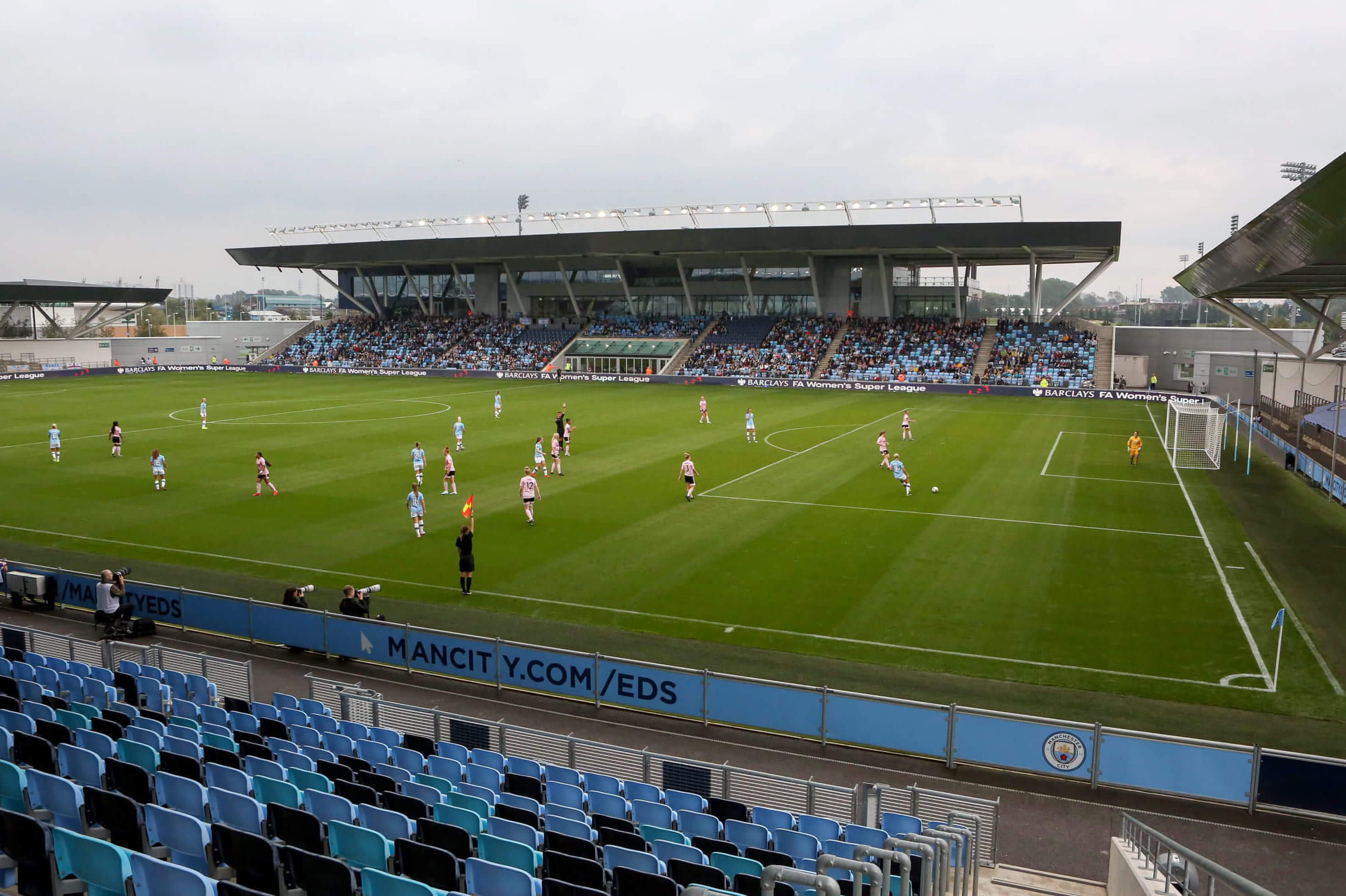 This season, every WSL team is now linked to a male Premier League team following Birmingham City Women’s relegation and the promotion of two-time WSL winners Liverpool Women. Criticism had been levelled at Liverpool following their relegation in 2019-20 regarding the working conditions and the standard of accommodation provided for players — and they are not alone.

Last summer, Manchester United Women were in the spotlight as The Athletic reported players had grown exasperated at the quality of facilities they used at their Carrington training ground and the accommodation provided for them, as well as expressing confusion over a lack of direction at the club.

This week, United appointed Brighton’s general manager Polly Bancroft as their first head of women’s football in a role that will see her work with football director John Murtough and allow head coach Marc Skinner to focus on matters on the field.

Players returning to WSL clubs from the winning England team this summer are likely to have greater value and more power than ever to demand higher wages, too.

Super-sub Alessia Russo is known to have turned down a new contract at United before the tournament and she, along with team-mates Ella Toone and Mary Earps, who have one year left on their contracts, will be able to demand more from the club if they want to keep her.

The same is true at Liverpool having recently re-signed Dutch winger Shanice van der Sanden, who sought assurances that standards had improved at the club before returning last month. During her previous spell in the 2016-17 season, Liverpool were training on artificial pitches in Widnes but have since moved to the Solar Campus, which is also home to Tranmere Rovers and has a better standard of facilities with grass pitches monitored by specialist ground staff.

Accommodation provided for players has drastically improved, too, with apartments on the Merseyside waterfront proving popular with players, while the appointment of Russ Fraser as women’s managing director has eased the lines of communication for head coach Matt Beard.

Manchester City train and play at the club’s Etihad campus. The club have been praised for their backing of the women’s team since they joined the WSL in 2014 and have since won one league title and three FA Cups.

Two of the three England players not to be returning to the WSL this summer have recently left the club, however, with Georgia Stanway joining Bayern Munich and Lucy Bronze sealing a shock move to Barcelona this summer. Rachel Daly is the only other player who plays overseas for Houston Dash in the NWSL.

The relationship between Premier League clubs, their WSL counterparts and the FA will be an interesting one if the league is able to enter the next stage of its growth. Investment from the Premier League in women’s football exists at the grassroots level and in funding women’s teams but it remains to be seen how that relationship will evolve given the WSL is a separate entity.

“We’ve had open conversations before with the FA about change and we haven’t changed much because it wasn’t the right moment,” said Premier League CEO Richard Masters. “All the stakeholders have got to decide if things change and that’s the FA, the clubs and Premier League. But at the moment, it is a moment of national celebration.”

As the third interested party in the growth of the league, the FA is keen to ensure it remains involved as a key voice in the future of the WSL, in part to allow the elite game to remain connected with grassroots levels but also to ensure joined up thinking between clubs and the national team.

In the 11-year history of the WSL, there have several landmark moments. With a short turnaround between this summer’s Euros and next year’s World Cup in Australia and New Zealand, the hope will be that 2022-23 proves to be another step forward for players and the organisation of the competition.