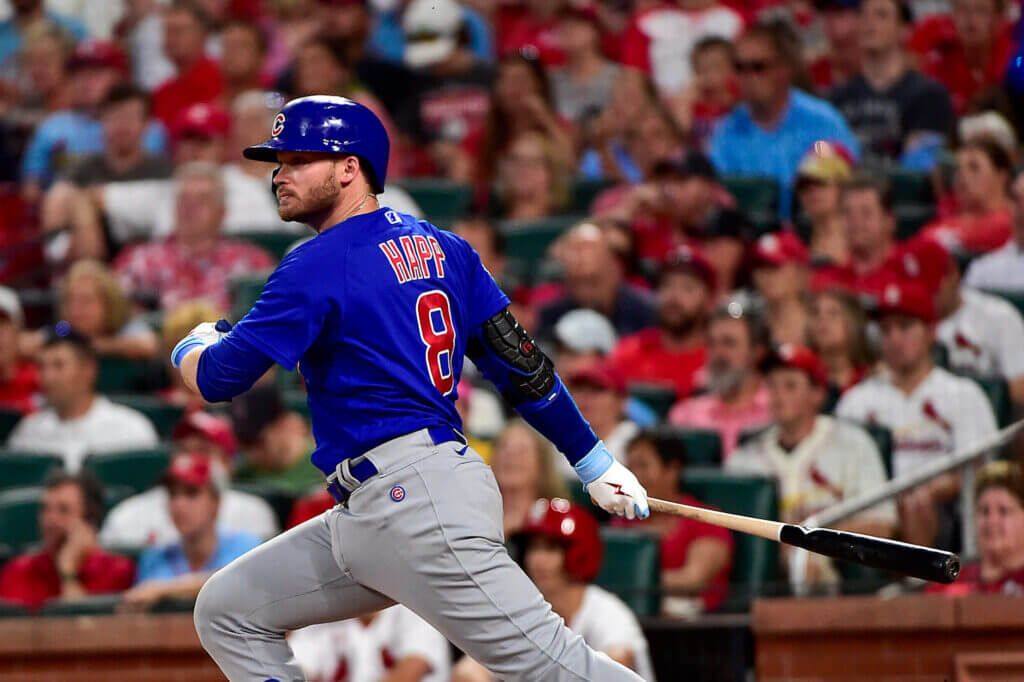 ST. LOUIS — It was a strange scene early Tuesday evening at Busch Stadium as the clock ticked closer to the 5 p.m. trade deadline. Most of the Cubs roster spilled onto the field — pitchers working in the outfield grass, and position players taking grounders and batting practice on the dirt.

Reliever Mychal Givens checked his phone, put it away after a quick conversation, then started getting his arm warm. Minutes later, he’d get back on the phone and take a slow, calm walk back to the dugout and into the clubhouse. It was Jed Hoyer on the line, letting him know he’d been traded to the Mets in a deal netting the team pitching prospect Saúl González.

Media members lined the dugout wall, noting the conspicuous absence of Willson Contreras and Ian Happ. A player safe from the rumors came by and asked, “Hearing anything?” before quickly returning to the field. No whispers yet, but the safe assumption was Contreras was sure to be traded, Happ likely as well.

But the deadline came and went and there they were, standing next to each other along the left-field line minutes before first pitch, donning the only uniform they’ve known in their professional careers.

“We’re still here,” a beaming and relieved Contreras told members of the media after Tuesday night’s 6-0 loss to St. Louis.

Shortly after the deadline had passed, manager David Ross stepped into a near-empty clubhouse and gave Happ and Contreras the news: They were not being traded. The two hugged each other and then their manager, then eventually went and joined their team on the field. During the game, Happ stole a would-be home run in left field, adding to his already improved defense this season. Contreras legged out a triple, looking at the dugout as he reached third and pointing to the name on the back of his jersey.

As Contreras stepped in front of reporters after the game, a big smile spread across his face. Sure, he was happy to stick with the only team he’s known, but the sense of relief was hard to miss.

“I feel like there was a lot of weight off my shoulders,” Contreras said. “Today was a long day. I was really anxious to see what was going to happen. I got to the clubhouse and I was still a Cub. But I was aware of (the deadline), and when 5 o’clock came and once the news told me I was still a Cub, it was amazing. I’ve done nothing but do the best I could to help this team win. Now that this is over, I just need to keep my focus on baseball, and that’s it.”

“It was a lot of weight off my shoulders.”

After last summer’s sell-off, team president Jed Hoyer talked about not letting a crisis go to waste and how it didn’t make sense to go halfway. So of course it made sense to believe Contreras — a free agent at the end of the year and a player the Cubs have shown little motivation to try to extend — would be moved by the deadline. After declaring to reporters he “just want(s) this to be over” in San Francisco, Contreras acknowledged he expected to be moved.

“I’m happy it’s over,” Contreras said. “Even if I got traded, I’d be happy that it’s over. Now, it takes a lot of weight off my shoulders. I assumed a lot of things because it happened the year before. I probably made a mistake assuming, but I did it. Now I’m really happy to stay here.”

Contreras’ face told the story, from emotionally exhausted over the weekend to total joy and a seeming sense of ease. Happ said the last two days were the toughest — Monday’s off day and the long hours before 5 p.m. on Tuesday as they waited to learn their fate.

“Those are times that are the toughest, when you’re not preoccupied with work,” Happ said.

Both players appreciated the applause they received as they emerged from the clubhouse and headed out onto the field before the game. This wasn’t a packed Wrigley or even a hotly contested road game for a team in the thick of the playoff race. The Cubs are a bad team that was expected to sell off its best players once again, and still there were enough Cubs fans at Busch Stadium for Contreras and Happ to feel appreciated.

“The fan base is unbelievable,” Happ said. “They travel well; they’re always here — in St. Louis, and they’re always everywhere. In a road stadium, to come out and get that ovation was cool.”

But with the drama of the deadline over, what’s next for this group? The players will tell you it’s about the next game. That’s their focus, as it should be. They can’t overthink things; they’ve done enough of that already, as circumstances have forced them to.

Happ wants to continue to better himself and help a young team grow and improve for next season.

“Still a lot of work to do for me personally,” Happ said. “Every day there’s things to tweak, things to learn, things to work on. As a team, there are a lot of guys in this group that are going to be here next year and have a chance to make a huge impact and learn a lot. We can go out there as a team every day trying to compete, but trying to learn and get better as a group.”

As has become the norm, looking toward the future is what makes the most sense for the Cubs. The next two months will be a similarly drawn-out process of long good-byes for Contreras, who is almost sure to walk in free agency — unless the Cubs give him a qualifying offer and he accepts it. The trade rumors are likely to come right back to the forefront for Happ this winter as well.

Overall, in the moves the Cubs did make, outside evaluators see quality upside added, and many within the organization were thrilled to add Ben Brown and Hayden Wesneski (in deals that sent David Robertson to Philadelphia and Scott Effross to the Yankees, respectively) in particular. The Cubs view both as starting pitchers, with Brown having significant upside and Wesneski looking like he’s on the verge of arriving in the big leagues. The Cubs’ system is in a better place today than it was two days ago, and certainly leaps and bounds above where it was when Hoyer stepped in for Theo Epstein in the winter of 2020.

Happ and Contreras are Cubs for 2022, that much is known. Now the question is whether they’ll be a part of the next great Cubs team Hoyer keeps promising fans.