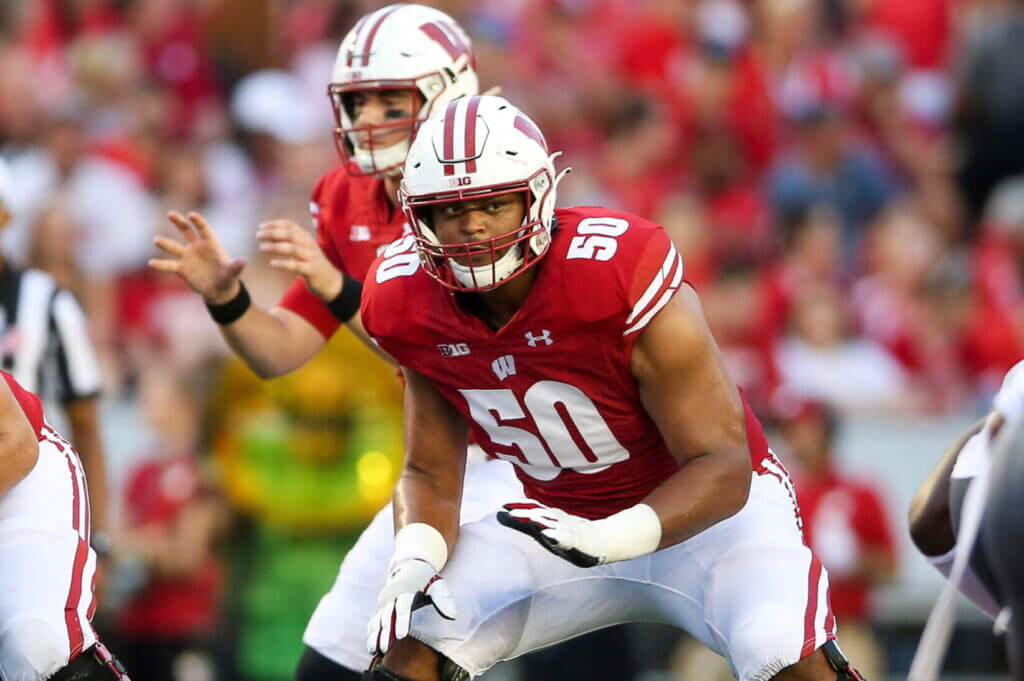 MADISON, Wis. — Logan Brown has a single tattoo located on the inside of his left wrist. Someday, when the 6-foot-6, 313-pound Wisconsin offensive lineman loses his playing weight, he says maybe he’ll choose to get another one on his body. But any future decision he makes will come with one caveat.

“I’ll probably never put anything else on that arm,” Brown said.

Inscribed there in dark lettering are three words: Type 1 diabetic. Brown, a redshirt junior who has positioned himself for Wisconsin’s starting right tackle spot to open this season, said he was first diagnosed with diabetes two days before his 13th birthday when his mom noticed some changes in him and sought a blood sugar test. One week after he turned 16, Brown received his tattoo to essentially serve as a medical ID.

The experience remains particularly meaningful to him. His grandmother, a Type 2 diabetic, accompanied him to the shop where they both got identification tattoos, each their first tattoo of any kind. Brown said his mom, uncle, grandmother and grandfather all lived with diabetes.

“I had people around me to help and support me,” Brown said.

Now, Brown also receives that support from Wisconsin through his coaches, teammates and the athletic training staff. Diabetes is a chronic health condition that impacts how the body breaks down food into sugar and releases it into the bloodstream. Typically, when blood sugar rises, the pancreas releases insulin to create energy for the body’s cells. Brown, as a Type 1 diabetic, requires assistance to create insulin with shots that he gives himself in the gut area every time he eats.

Practices represent their own challenges. Wisconsin’s preseason camp sessions typically run a couple of hours and last 20-plus periods. Brown said he has to step off the playing field to prick his finger for a blood sugar check about every five periods.

“I’ve appreciated what Logan fights through every day, quite honestly, to be out here,” Wisconsin coach Paul Chryst said. “That’s not easy. The one thing that I never question about Logan is what his intentions are. He cares about this team and he wants to do what he can. I think he’s gotten better. It’s a short sample size, but I think he certainly did stuff over the summer and he’s worked. But every day he comes out, he’s got to deal with a little bit more than a lot of guys do.”

Brown said he is aware of a few other football players who live with Type 1 diabetes, including former pro quarterback Jay Cutler, Pittsburgh Steelers defensive lineman Henry Mondeaux and Baltimore Ravens tight end Mark Andrews, who was diagnosed at 9 years old and receives blood checks on his finger about 30 times a game. Brown doesn’t want to make excuses, but he also is realistic about what he faces each day. Consistently checking his levels is critical to ensure that he doesn’t miss an entire practice, and there are some moments in which he simply isn’t physically able to give what he wants.

“It gets frustrating when other people don’t understand,” Brown said. “You can’t make them understand because it’s hard to understand something that you don’t have to go through. People will look up to you and be like, ‘We need you, we need you.’ But at the moment, I’m like, ‘I need me, too.’ So it’s definitely an obstacle and it gets frustrating.”

Brown’s fellow offensive linemen acknowledged that they’re aware of what he endures each day and praised his ability to respond.

“I’ve definitely seen that affect him in certain situations, but I think he handles it well,” Badgers center Joe Tippmann said. “We know that this is not some small thing. This is something he’s got to take care of. I think everybody understands it well.”

Brown said he was thankful to the athletic training staff for helping him stay on top of his health, and he appears to be on the cusp of a breakthrough season that Badgers fans have long awaited. His arrival at Wisconsin in the 2019 recruiting class brought enormous expectations based on his potential. Brown became the first five-star prospect to sign with the Badgers in 12 years, dating back to in-state offensive tackle Josh Oglesby in 2007. He was rated in the 247Sports Composite as the No. 4 offensive tackle and the No. 17 prospect overall in the country.

But playing time largely eluded him early in his career. He missed his first season because of a torn labrum in his left shoulder. Brown initially suffered the injury during the All-American Bowl game while still in high school and then aggravated it during his first preseason camp with the Badgers.

During Brown’s redshirt freshman season in 2020, Cole Van Lanen — an eventual sixth-round NFL Draft choice of the Green Bay Packers — started at left tackle for most of the season. When Van Lanen didn’t play in Wisconsin’s final two games, then-offensive line coach Joe Rudolph moved Jon Dietzen over from left guard to left tackle. Brown did play 38 of his 58 offensive snaps that season during the Duke’s Mayo Bowl against Wake Forest, which gave him confidence.

Brown remained a little-used backup last season because Tyler Beach took over the starting left tackle role. Brown ultimately played 70 snaps in a reserve role and never more than 21 snaps in any game. Rudolph moved on to Virginia Tech in the offseason, and Bob Bostad took over coaching Wisconsin’s offensive line. Bostad immediately moved Brown to right tackle for spring practices, which represented Brown’s first time on the right side in his playing career.

There were occasions when Brown looked tentative and struggled to keep quicker edge rushers from invading the backfield. Bostad made it clear entering preseason camp that Brown had to show improvement to earn the starting spot.

“I need to see him take some further steps to wipe away any issues that we had in the spring and just become more of a dominant player,” Bostad said. “I think there were times where he definitely showed that. He had a really good offseason in the weight room. I think a lot of our guys had a really good offseason. But you’ve got to put it on film at the end of the day. You have to put it on film.”

Brown said Bostad, ever the direct and fiery coach, offered him a simple message to illustrate how important it was to be ready: “Come in with your piss hot.” All indications are that Brown has heeded Bostad’s advice and put together a solid first week of preseason practices. He handled all the first-team right tackle reps during an open practice Monday, while Riley Mahlman worked with the second-team unit. Brown’s comfort level appears to be substantially higher in fall camp compared to spring practice.

“When I got in my stance and took that first set, it felt like it came together,” Brown said. “It felt awesome. Of course there’s always work to do, but it felt great.”

Mahlman, a former four-star prospect in the 2021 class and the No. 1 player in Minnesota, is a 6-8 and 315-pound specimen whose physicality stands out. He has all the tools to challenge Brown should an opening arise. But even he marvels at some of the traits that Brown possesses.

“I see a long, lanky dude with athleticism,” Mahlman said. “Good build, long arms. Those things are crazy. When he really gets a hold of someone and he gets a good strike, they’re his. They’re not getting out of there.”

Brown said he believes he is “a game-changer” in the run game and wants to be known for his consistent pass protection as well. This season and what it could mean for him has been a long time coming. He is determined to ensure that no obstacles stand in the way of him achieving his ambitions.

“I don’t want to say it’s pressure but more motivation,” Brown said. “I have to stay motivated. I think a big thing for me is I haven’t gotten to start a game yet. That’s a big reward if I can maintain this spot for the rest of my career here. That’s the goal.”