Round numbers are almost always arbitrary, but in baseball they’re sometimes useful. They’re guideposts, mile markers, recognizable opportunities to stop and consider a player and his accomplishments. Xander Bogaerts reached such a milestone Thursday.

With a two-out double in the first inning, Bogaerts not only set up an early Red Sox run — a run that proved crucial — but also became the eighth player in franchise history to reach 300 career doubles and 150 career home runs. He’s the 25th player in major-league history to reach those thresholds before his 30th birthday.

The only other Red Sox player to do it at such an early age? Carl Yastrzemski.

The only other shortstop to do it while still in his 20s? Alex Rodriguez.

The only other active players, at any position, to have achieved those numbers at this age: Albert Pujols, Miguel Cabrera and Freddie Freeman.

Bogaerts added an infield single in a 4-3 win against the Orioles, but the Red Sox remain three games below .500 and 4 1/2 games out of the third wild-card spot. Until further notice, their season is what it is, and each game is either a fight for relevance or a countdown to an offseason of potentially tremendous turnover.

And so, every round number for Bogaerts is another opportunity to consider his place in franchise history and to debate his future within the organization.

“Obviously having something personal like this on a night that we win is much better to sleep,” Bogaerts said.

Here’s the list of Red Sox players who have reached Bogaerts’ combination of 300 doubles and 150 home runs. (He has exactly those two round numbers at the moment.)

Nomar Garciaparra was close to making the list (178 homers, 279 doubles), and Dustin Pedroia might have gotten there with two or three more good, healthy months (394 doubles, 140 homers). It’s interesting that for nearly a century, the Red Sox almost always had an eventual 300-150 player on their roster. Since 1937, the only seasons missing such a player are in the early 1990s when Mike Greenwell nearly bridged the gap (130 career homers with 275 doubles). It helps to have two Hall of Famers covering nearly a half-century.

But such consistency in those round numbers is also a hallmark of the Red Sox as an organization. Even when they weren’t winning championships, they pretty much always had at least one standout in the lineup, a player with player with productive longevity. If Bogaerts doesn’t return after this season, it could be a long time before the Red Sox continue that chain (Rafael Devers has 136 homers but “only” 175 doubles). Not that we needed a round number to recognize Bogaerts’ place in franchise history, but it’s a good excuse. Here are eight numbers that speak to Bogaerts’ place with the Red Sox and the uncertainty of whether his career will continue in Boston or somewhere else. 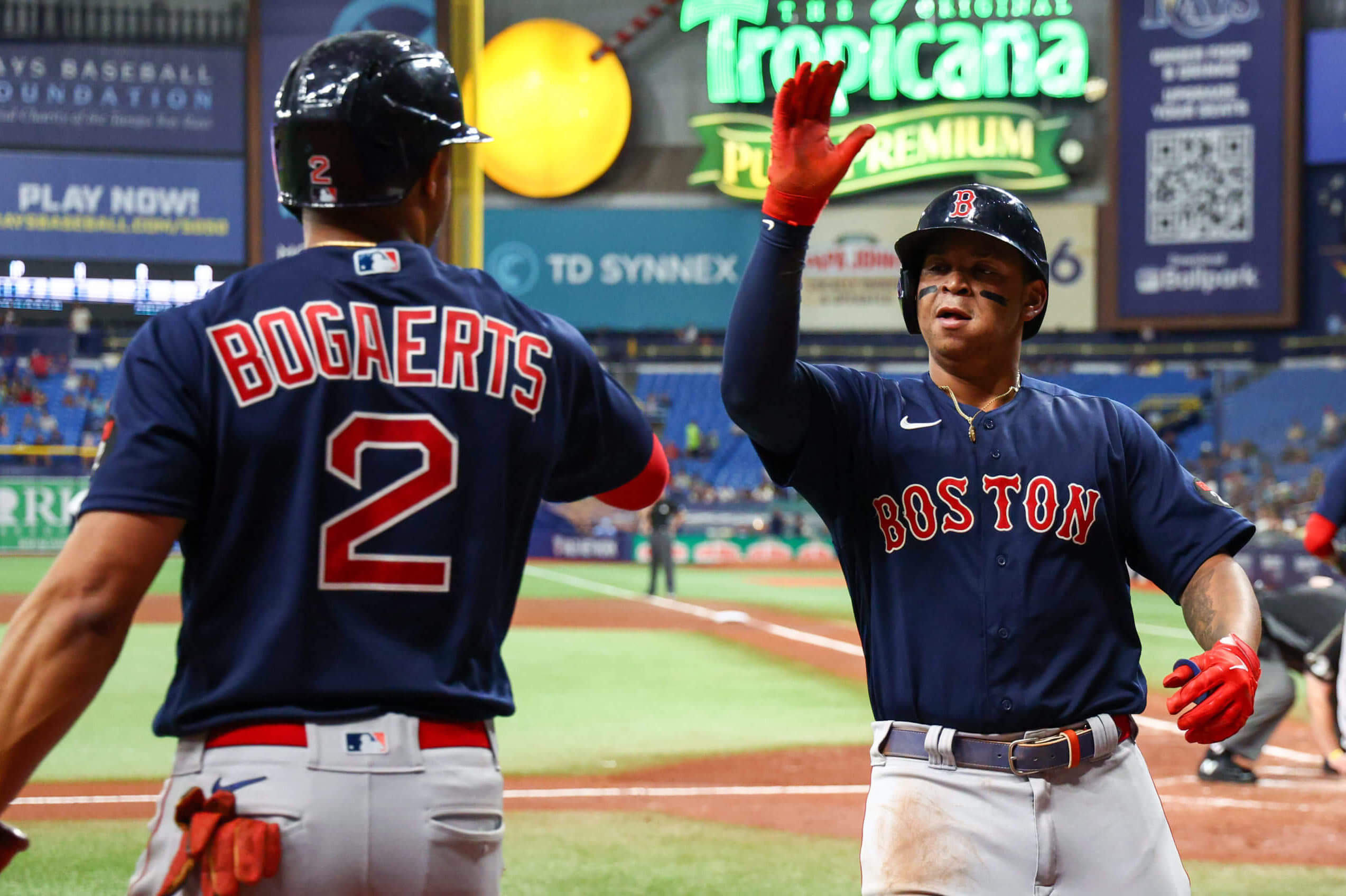 Bogaerts and Rafael Devers are connected both on the Red Sox infield and in their potentially short times with the organization. (Nathan Ray Seebeck / USA TODAY)

1,138 career starts at shortstop — This is Bogaerts’ existing longevity in a nutshell. He set this franchise record in June, moving ahead of Everett Scott — who’d held the record for more than a century — to become the Red Sox’s all-time leader in games started at shortstop. Bogaerts also holds the franchise record for consecutive Opening Day starts at shortstop. He’s done it nine years in a row, ever since he was a rookie in 2014. He has the same number of consecutive Opening Day starts as Jim Rice in left field and David Ortiz at DH. It’s a streak that, quite obviously, would end if he’s not re-signed.

44 playoff games — This is fourth-most in Red Sox history behind Ortiz (76), Jason Varitek (63) and Pedroia (51). It’s one more than Manny Ramirez. It would take a deep postseason run this year for Bogaerts to move any higher on the list, but clearly the playoffs are a crucial part of his legacy in Boston, beginning with his arrival as a 20-year-old in 2013 through the dominant championship run of 2018 and the ALCS last year. Bogaerts has not been an exceptional playoff performer — .691 OPS, more than 100 points lower than in the regular season — but he’s been a vital part of good teams. That, too, gets a player remembered.

150 home runs — Bogaerts reached this milestone last week, one day after the trade deadline (which happened to be one day after he stood in the Red Sox clubhouse and said the trade of Christian Vázquez caused him to question the direction of the organization). This has been an unusual home run season for Bogaerts, because he’s hit only nine after hitting at least 23 in each of the past three full seasons. He hit 11 in 56 games during the shortened 2020 season, but this year he’s played nearly twice as many games (108) while hitting fewer home runs. Career home run No. 150 was only his third home run in two months. That said, the list of Red Sox players who got to 150 homers before turning 30 is undeniable.

Xander Bogaerts is the 17th player to hit 150 HR for the Red Sox, but only the 9th to do so before turning 30 years old:

300 doubles — Before the end of this season, Bogaerts could pass both Varitek (306) and Dom DiMaggio (308) for ninth place on the organization’s all-time doubles list. If he comes back, it’ll take him two or three years to match Rice (373) in eighth place, but Bogaerts is on pace to finish top five in the American League in doubles for the third time in the past five years. He’s even with Manny Machado on the MLB active list. His double on Thursday made Bogaerts the 11th player to hit 300 doubles for the Red Sox, but only the second to do it before turning 30.

Two outs above average — The biggest knock on Bogaerts is surely his defense, but he might have rectified some of that this season. For the first time in five years, the Statcast measurement Outs Above Average rates Bogaerts as a good defender. He was a negative-16 in 2016, and a negative-9 in both 2019 and 2021, but this season Bogaerts is a plus-2, same as noted defender Javier Báez. Defensive Runs Saved basically agrees that Bogaerts has significantly improved in the field. His 0 DRS would be the highest of his career, because every other season he’s been a negative (as low as minus-11 in 2017, and a minus-5 as recently as last year). Bogaerts worked this offseason specifically to improve his defense, which seems to be paying off. It certainly doesn’t hurt his value, and perhaps generates some confidence that he could stick at the position for the foreseeable future.

32.3 WAR — That’s as measured by FanGraphs since 2015, which was Bogaerts’ second full season in the big leagues when he won his first Silver Slugger and solidified himself as a no-doubt everyday player. It’s the 11th-highest fWAR among major league position players during that eight-year span, just ahead of Aaron Judge and Josh Donaldson and right behind Manny Machado and Bryce Harper. Of course, the top two in that time frame are Mike Trout and Mookie Betts, the latter of whose trade to the Dodgers in 2019 seems to be the most compelling reason to wonder about the Red Sox willingness and/or desire to pay what it will cost to keep Bogaerts beyond this season.

$20 million — This is the average annual value of Bogaerts’ contract. He’s in the third year of a six-year, $120-million extension signed in April of 2019, and he’s almost certainly going to opt out at the end of this season. According to Cot’s Contracts, Bogaerts’ current deal pays him the seventh-highest annual salary of any shortstop in baseball history, just ahead of Derek Jeter (on Cot’s list, Alex Rodriguez is counted as a third baseman). That seems pretty good. The problem is, the six shortstops ahead of Bogaerts have all signed in the past two years (Carlos Correa, Francisco Lindor, Corey Seager, Marcus Semien, Fernando Tatis Jr., Javier Báez) which has set a new financial standard at the position. Correa also has the right to opt out after this season, setting the stage for a high-powered free agent shortstop class of Correa, Bogaerts and Trea Turner.

29 years, 315 days — That’s Bogaerts’ age as of Friday. He turns 30 on October 1. At that point, the Red Sox will have only five games left this season. Thursday was further proof that Bogaerts has been one of the greatest 20-somethings to ever play for the Red Sox. He’s already 18th all-time in position player bWAR for the franchise, in between Johnny Pesky (a local icon whose career was limited by World War II) and Manny Ramirez (who burned bright but spent less than half of his career in Boston). Bogaerts is about 10 WAR away from being in the organizational top 10. If he comes back, he could get there. If not, he’ll be another of those players whose name pops up whenever the next superstar reaches a nice round number, and we’ll be reminded of just how good he was before he went away.

With milestone, Xander Bogaerts solidifies place in Red Sox history, however fleeting it might be

Twilight of the A-list: has the 21st century killed off the movie star?