What happens Tuesday night will impact the Washington Wizards’ future. With a lot of luck, the Wizards would find themselves in position to draft a young player who would change the franchise’s fortunes. It all depends on the random bounces of 14 swirling ping-pong balls.

I’m talking, of course, about the 2022 NBA Draft Lottery.

When the 2021-22 Wizards assembled for training camp back in September, they did not expect to be in this position. They anticipated earning a playoff spot, which would have meant staying out of the lottery altogether. But after a 35-47 season left them with the league’s 10th-worst record, Washington finds itself in the same general vicinity of the franchises that strategically tanked away their seasons: Houston, Orlando, Detroit and Oklahoma City.

And now that the Wizards are here, team officials need to make the most of their upcoming first-round pick, wherever their team lands in the lottery.

With their lottery odds, the Wizards likely will end up with the 10th or 11th pick. To draft a franchise cornerstone at No. 10 or No. 11, team officials would have to hope for two things to happen. First, the teams picking ahead of them would have to undervalue a future star. And then, the Wizards would have to correctly identify that player. This scenario has happened before, just not recently for the Wizards. Consider that Kawhi Leonard lasted until the 15th overall pick in 2011, Giannis Antetokounmpo dropped to 15th in 2013 and Donovan Mitchell remained available until the 13th selection in 2017.

How could the draft play out? To help answer that question, I visited Tankathon, a website that can simulate lottery results based on the lottery teams’ odds. I simulated the lottery enough times to eventually hit five of the Wizards’ most likely draft spots. Armed with those draft orders from Tankathon, I’ve mocked each of those five drafts up to the point where Washington would pick.

Let’s not mince words: Any mock draft at this moment is a “guessing game,” as one of my colleagues recently wrote. The Wizards have not yet interviewed the draft’s top underclassmen, reviewed medical records or held individual workouts at the team facility. But I gave it a go anyway.

Before we begin, here’s a rundown of the Wizards’ lottery odds at each possible pick:

I think the Wizards would, and should, choose Jabari Smith Jr., the 6-foot-10 forward from Auburn.

This scenario could not have worked out better for the Wizards. They would select arguably the best player in the draft without burdening him with the expectations that go with being the top overall pick.

Smith is an elite shooter for someone of just about any height. He made 42 percent of his 3s and nearly 80 percent of his free-throw attempts as a freshman, and as The Athletic’s NBA Draft analyst Sam Vecenie wrote, “There are few better 6-foot-10 shooters to have entered the NBA over the last decade.”

Smith also is a very good defender who is agile enough to switch onto many smalls. He turned only 19 years old this past Friday, making him younger than Banchero, Ivey and Holmgren. You can make a solid argument he’s more ready for the NBA right now than Banchero, Ivey and Holmgren — and potentially has more room to improve than any of them except for Holmgren (assuming Holmgren fills out his incredibly slender 7-foot frame).

I’m well aware that power forward is a position of strength for Washington, with Kyle Kuzma established at starter and Rui Hachimura, Deni Avdija and Isaiah Todd also on the roster. Heck, even Kristaps Porziņģis can play the four. And of course, I know the Wizards desperately need a point guard.

But when you’re drafting this high — particularly in the NBA Draft, not the NFL Draft — I think a team should draft less for need and more for realizable upside. Smith has a better upside than either Banchero or Ivey, in my opinion. As for Ivey, he’s more of a combo guard at this stage of his development than a point guard.

If the Wizards are fortunate enough to draft Smith, they could either shift Kuzma down to small forward and/or seek to trade Kuzma, Avdija or Hachimura for point guard help. 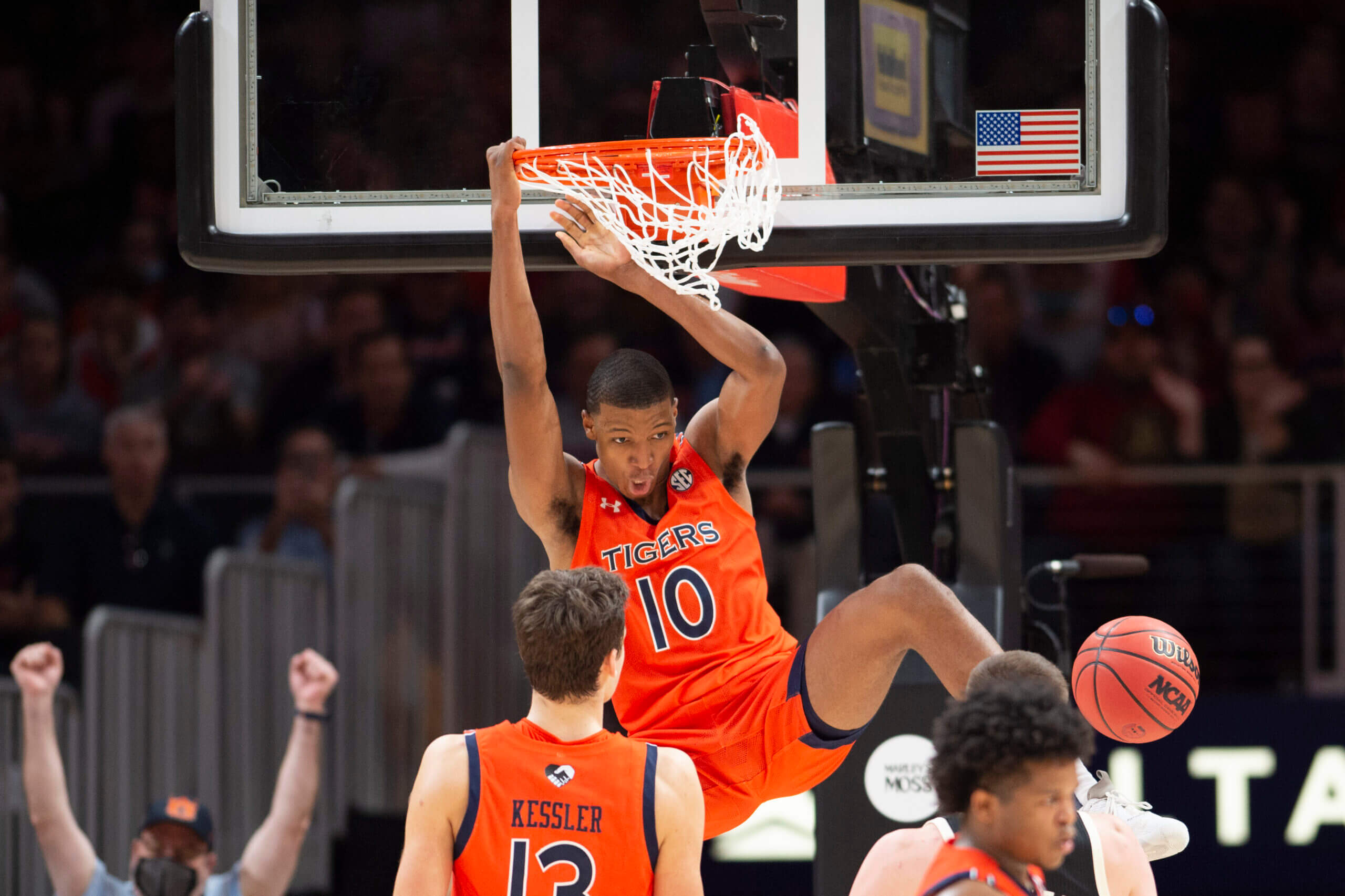 Drafting Jabari Smith Jr. would be a dream scenario for almost any NBA team, including the Wizards. (Hakim Wright / Associated Press)

The Wizards should select 6-foot-9 forward Jeremy Sochan from Baylor here, and it would not surprise me if team officials would be delighted if he were available at 10th overall.

Sochan is a jack of all trades, someone who can fill a lot of roles for an NBA team. Vecenie wrote: “The idea here is he’s a ‘positionless’ 6-foot-9 wing who can attack bigs off the bounce with some hesitation, a guy who can be the screener or the ballhandler out of ball screens.”

I have some concerns about his shooting. He made only 30 percent of his 3s on 2.7 attempts per game. He needs to improve.

But I have to confess I’m not ecstatic about the Wizards’ other options at No. 10 in this scenario. I see some mock drafts have Mathurin falling to 10th — a dream scenario for Washington — but I don’t think it’s realistic to expect him to drop that far, if he drops at all.

I would have drafted Washington here if Sochan was not on the board. 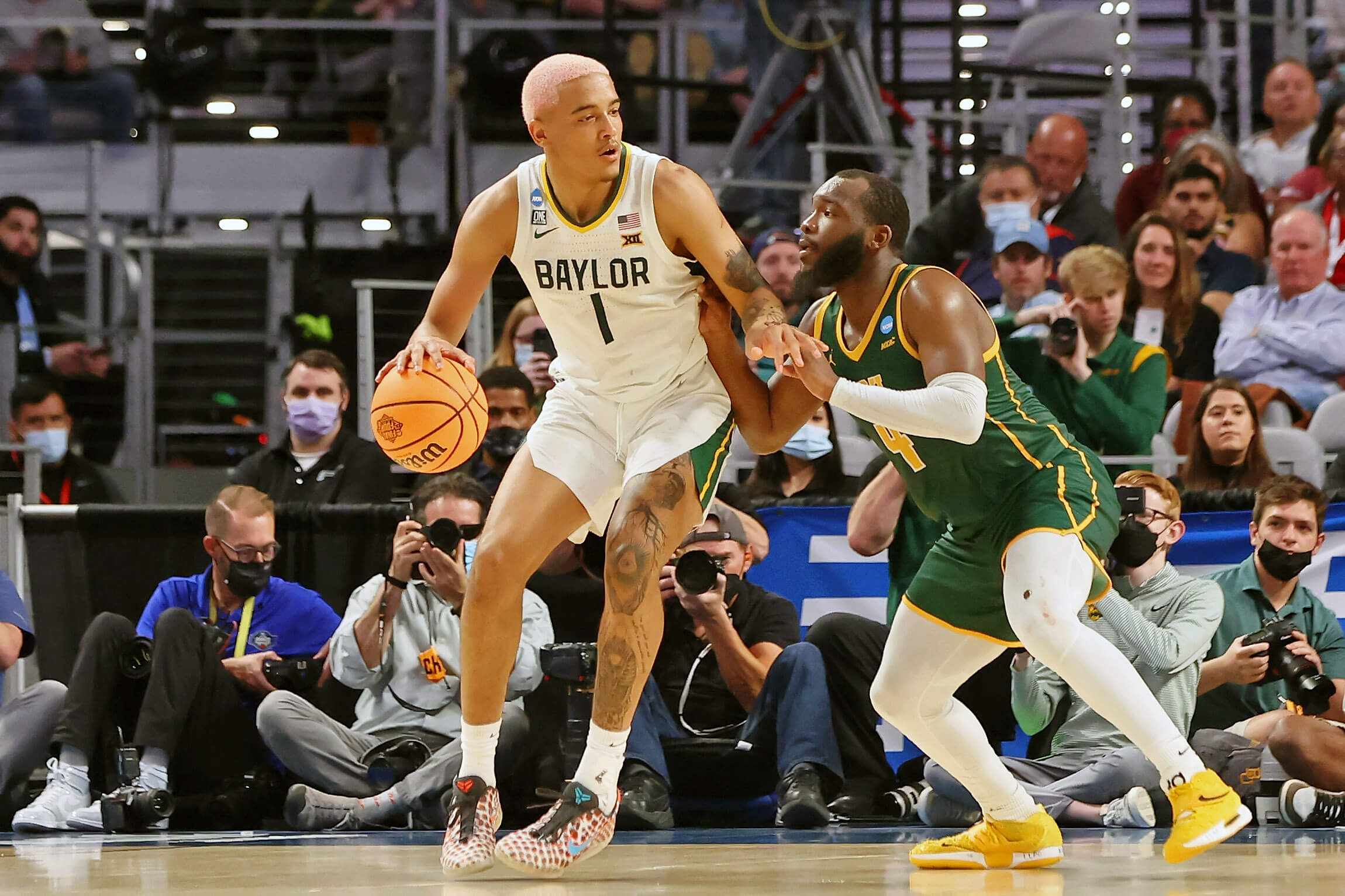 Note that there’s only a 3.0 percent chance of this scenario occurring, but I’m covering it anyway because it addresses the fascinating question of what the team would do if it has its choice of any player in the draft.

I suspect the Wizards’ brass would pick Jabari Smith Jr. here over Holmgren and, as I wrote in the scenario in which they won the second pick, over Paolo Banchero.

It’s not that I dislike Holmgren or Banchero. I love Holmgren’s competitiveness and skill, but I’m concerned about how effectively he’ll put on weight and the likelihood of him realizing his potential. I love Banchero’s playmaking ability and how he performed during Duke’s run to the Final Four.

You could argue Smith has the highest likelihood of reaching his potential among this trio — and that his upside is close to Holmgren’s and exceeds Banchero’s. Certainly, I think Smith would reach his potential faster than Holmgren would reach his. Given that the Wizards appear intent on re-signing Bradley Beal and attempting to win now with Beal and Porziņģis, I think Smith and Banchero would be better options than Holmgren.

This scenario is similar to the scenario in which the Wizards tapped Sochan at No. 10, except that Sochan is off the board this time.

In this case, the Wizards would do well to select TyTy Washington Jr. I know Wizards president and general manager Tommy Sheppard has said he doesn’t anticipate selecting the Wizards’ 2022-23 starting point guard in this draft, but what about the 2023-24 or 2024-25 seasons or beyond? The Wizards could pursue a short-term stopgap for the starting job through the trade market or re-sign Tomáš Satoranský to a short-term deal as the stopgap option. 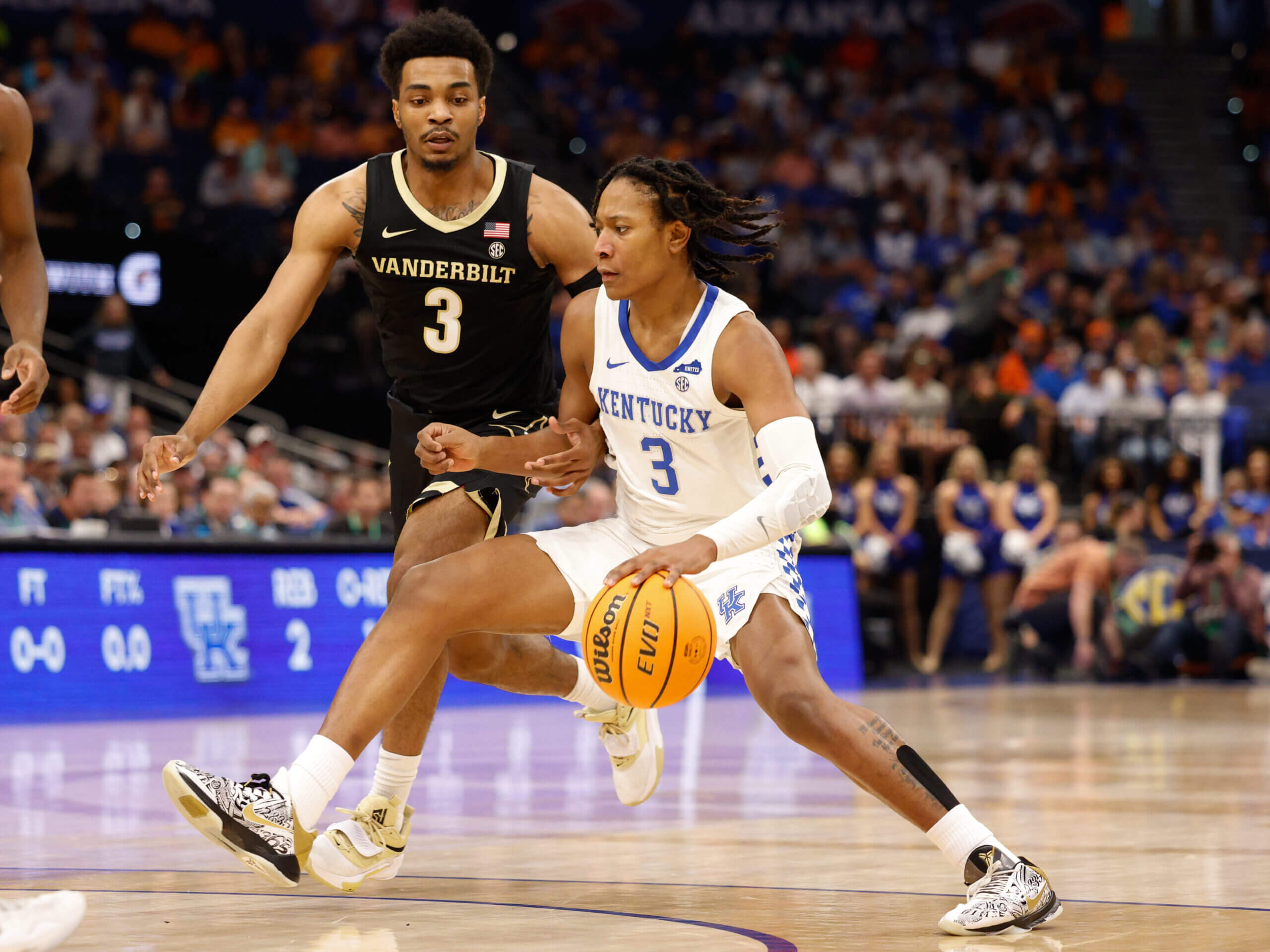 An intriguing point guard candidate, TyTy Washington Jr. should be available wherever the Wizards land in the lottery. (Nathan Ray Seebeck / USA Today)

This is my favorite scenario because it leaves the Wizards with one of the most difficult choices they could have: whether to select Banchero or Ivey.

I’ve gone back and forth on this one. Again, I think highly of Banchero. If the Wizards select him here, he would not be a “wrong” choice.

But he would not be the best choice. Ivey is a tremendous competitor, shot 36 percent from 3 as a sophomore on nearly five attempts per game and is a superb athlete. He would make the Wizards more exciting, for sure.

He isn’t perfect. His flaws include his defense. Also, he would need seasoning and significant improvement to develop into a primary initiator. As Vecenie wrote, “Ivey is a below-average passer as a lead guard right now despite making some awesome flash passes from time to time.”

What separates Ivey from Banchero — and let me emphasize how agonizing the choice is — is that, with a few notable exceptions such as Joel Embiid and Nikola Jokic, it’s a perimeter player’s league.

Obviously, Ivey and Beal would overlap positionally. But Beal can serve as the primary ballhandler at times and play alongside Ivey. Although the Wizards and Beal appear on track to agree to a long-term contract this summer, having Ivey would ensure Washington has Beal’s eventual replacement.

Food protests continue across Iran as one person reported dead