Around a decade ago, two boys became friends in the Lisbon district where they grew up and went to school.

Yet their journeys from Cascais to Wolverhampton and the football limelight have taken very different paths.

Chiquinho, the winger whose Premier League dream has been cruelly placed on hold this summer by a cruciate knee ligament injury that will rule him out for most of the season, was picked up by Sporting Lisbon at the age of nine.

Francisco Jorge Tavares Oliveira, to give Chiquinho his full name, spent a decade with the Portuguese giants, played senior football in the country’s top two divisions for Estoril and was spotted and signed by Wolves in January.

His friend’s story is a good deal less conventional.

Tote Antonio Gomes — or Toti, for short — did not play a proper game of football until he was almost 16 years old. Less than seven years later, he made his Premier League debut for Wolves.

“Normally players start when they’re four or five years old, so I started really late,” Toti tells The Athletic ahead of his first full season in Wolves colours. “I always enjoyed football and I played at school and in the park but I never had the opportunity to go to an academy or to a team.”

Now, just a few months into a five-year contract at Molineux, Toti is intent on making up for lost time.

For a while, it appeared that Toti’s most likely pathway to elite sport would involve an oval ball rather than a spherical one.

His homeland might not be known as a hotbed of rugby union but they love the game in Portugal — they even played in the 2007 World Cup — and, as a young winger with pace and power, Toti was very promising.

“I played regularly for six years,” says the 23-year-old. “There was a place that we used to go after school to study and then after studies they put on some activities like tennis and football.

“But the rugby was more serious. Eventually, they created a team, so I started to really enjoy it.”

But for Toti, football had always been at the back of his mind.

Born in the West African nation of Guinea-Bissau, he moved to Portugal with his family at the age of three and cannot recall a time when he did not enjoy kicking a football.

But things did not fall into place in the same way they did for other Lisbon-raised talents of his age. 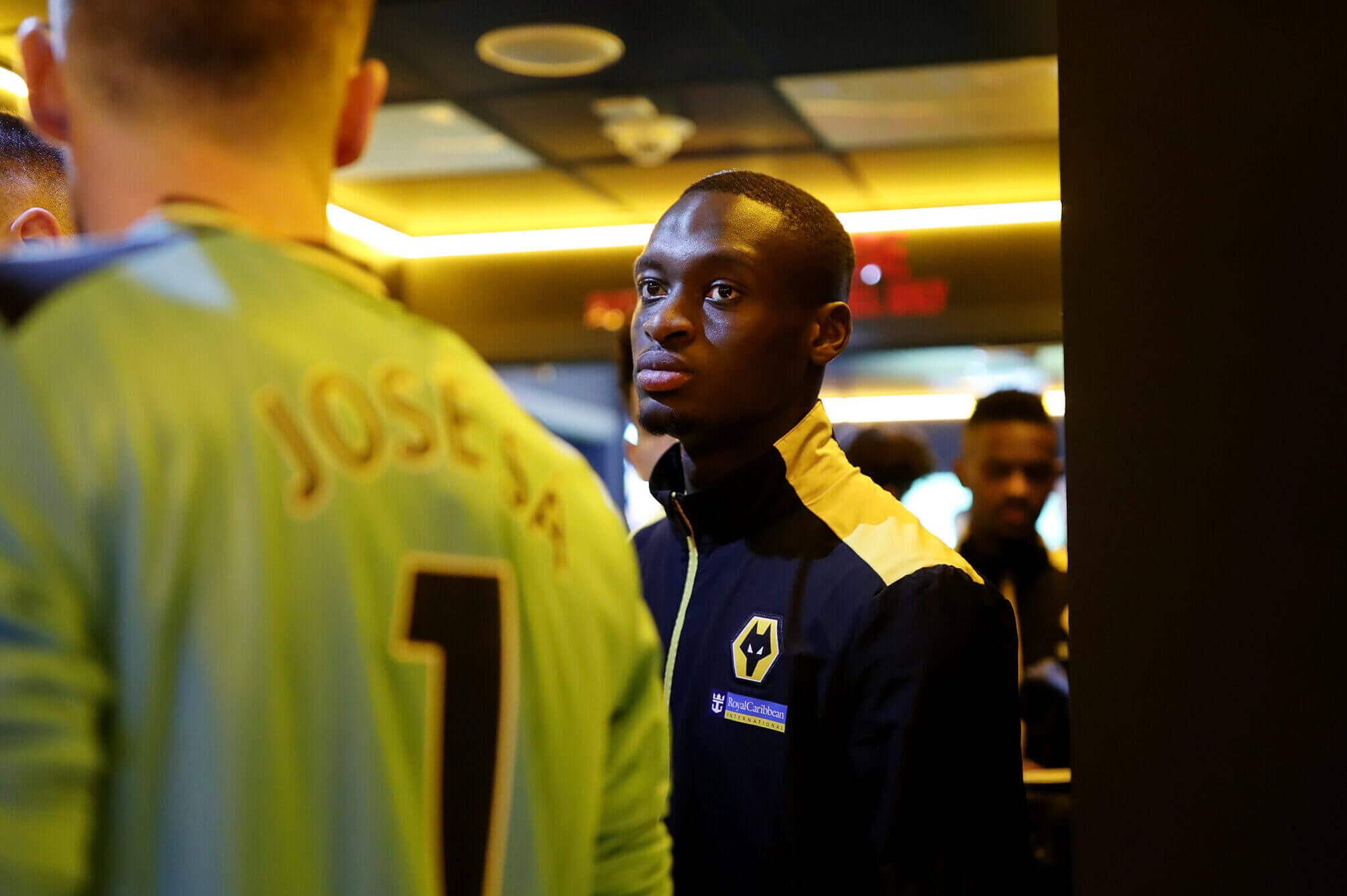 “I always enjoyed football when I was a kid but I didn’t have the opportunity like some other kids to go to a football academy when I was younger,” he explains. “So I started with other sports, like athletics, and I played rugby until a certain age and I only started playing football when I was nearly 16.

“When we moved house we had a football team five or 10 minutes away and I asked my father if it would be possible to put me there to start training. That’s where everything started.”

Finally, aged almost 16, Toti had a team, Fontainhas, but he was still not recognisable as the long-legged, athletic defender that so impressed Wolves fans last season.

“I was playing as a striker or a winger because I wanted to score goals,” he says with a laugh. “Every kid when they start wants to score goals! At that time I wasn’t really focused on having a career. I was not taking football too seriously. I just wanted to play and enjoy it.

“I always believed in myself but in the beginning it was just for fun — then, as time went on, I realised I could do more and I started dedicating more of myself to it.”

After a year and a half at Fontainhas, Toti met the man who changed the course of his career and his life.

Vasco Botelho da Costa was a coach at Dramatico Cascais, a third-tier club in Portugal, who made a habit of making contacts with local teams and being tipped off about the best young talents.

When he went to see Toti he was immediately impressed. But he had a clear message about what should happen next.

“The coach looked at my characteristics and said straight away, ‘You are not a striker’,” recalls Toti. “That season he played me at left-back. It went so well that I soon realised that he was right; I wasn’t a striker.

“At that moment I just wanted to listen and learn because he had more knowledge than me. After all, I had only started to play football a couple of years before!

“It’s not easy to learn tactics quickly, especially when you start as a striker and then change position to left-back or centre-back, but I had the opportunity to get a good coach who really opened my eyes and helped me a lot with those things.”

Toti spent just one season at Dramatico before Botelho da Costa was arranging the next stage of his development.

Using contacts at Estoril, the coach arranged for his young protege to visit the top-fight club’s academy.

It did not take long for him to be signed, and a season with the under-19s was followed by a rapid promotion to the under-23s with occasional chances in the first team.

“We knew each other in school, even before football,” says Toti. “We lived 10 or 15 minutes away from each other so we have known each other since we were 12 or 13 — for a really long time.

“He has played football for a team since he was a kid. I think he started when he was around seven. Eventually, he went to Torre, a small club, and then to Sporting.

“That was when we built a bigger connection.”

Little did the friends know that their career paths were destined to remain roughly parallel for quite a while longer.

By the summer of 2020, less than six years after playing his first organised match, Toti had caught the eye of Wolves’ European scouts.

He was signed by the club in September but loaned out immediately to Fosun’s Swiss club, Grasshoppers, where a successful first season brought promotion to the top division and a return for a second campaign.

In January 2022 he was summoned to Compton Park for a period of training with Wolves during the Swiss winter break, initially so Bruno Lage and his coaching staff could take a first-hand look at a player they had barely seen in the flesh.

His career was about to take a very different course. So, it turned out, was Chiquinho’s.

An injury crisis and the loss of Romain Saiss to the African Cup of Nations led Lage to hand Toti an unexpected debut in a 1-0 home win against Southampton.

15.01.2022 – Delighted and without words to describe this day. 🙏🏿💫
Grateful for the opportunity to make my debout at Premier League but expecially for @Wolves
Great home win, the fans were amazing! 🙌🏿 pic.twitter.com/8t2dcvxT6Z

He impressed and played again at Brentford a week later. His planned return to Zurich was cancelled.

At the same time, Chiquinho’s form for Estoril, who he had joined permanently from Sporting, had also caught Wolves’ eye.

While sitting in a hotel contemplating his own rapid rise, Toti received more welcome news.

“When I found out he was coming to Wolves and he texted me and called me I was really happy,” Toti recalls. “Coming to Wolves was really good because we remembered when we were together at lower levels, dreaming of playing in the Premier League or at another top level.

“We never dreamed it was playing for the same team but it’s really nice that it happened.”

He looked destined for a greater role this season until rotten luck struck him down.

Having scored in a 3-0 behind-closed-doors pre-season win against Burnley, he suffered a serious knee injury that will keep him sidelined for at least six months.

So alongside his own rehabilitation, his duties this season will include supporting his long-time friend.

Toti might still go back out on loan but much more likely is a role in Lage’s first-team squad and, as he discovered a year ago, opportunity is never far away.

“This is the first pre-season for me with Wolves because in my first seasons I went straight to loan in Switzerland,” says Toti, who is settling into life in Wolverhampton with his partner and their six-month-old daughter, Khyara.

He also scored in the behind-closed-doors defeat to Levante in Spain.

“It’s always good to be in the season from the beginning because you have a different perspective of what the coach wants during the season.

“Everything has changed very fast because I wasn’t expecting to stay here in January. I was planning to go back to Switzerland for the rest of the loan but things went well and (Lage) gave me the opportunity to play.

“After my debut, the club spoke with me and that was the moment when I realised that I would stay with the team and I was really happy about that.

“It was like a dream, and like any player, I want to keep improving and play more minutes this season. I will keep working hard for that.”

‘How many litres of blood do we need?’: Ivo van Hove’s ITA on 20 years of shocking theatregoers