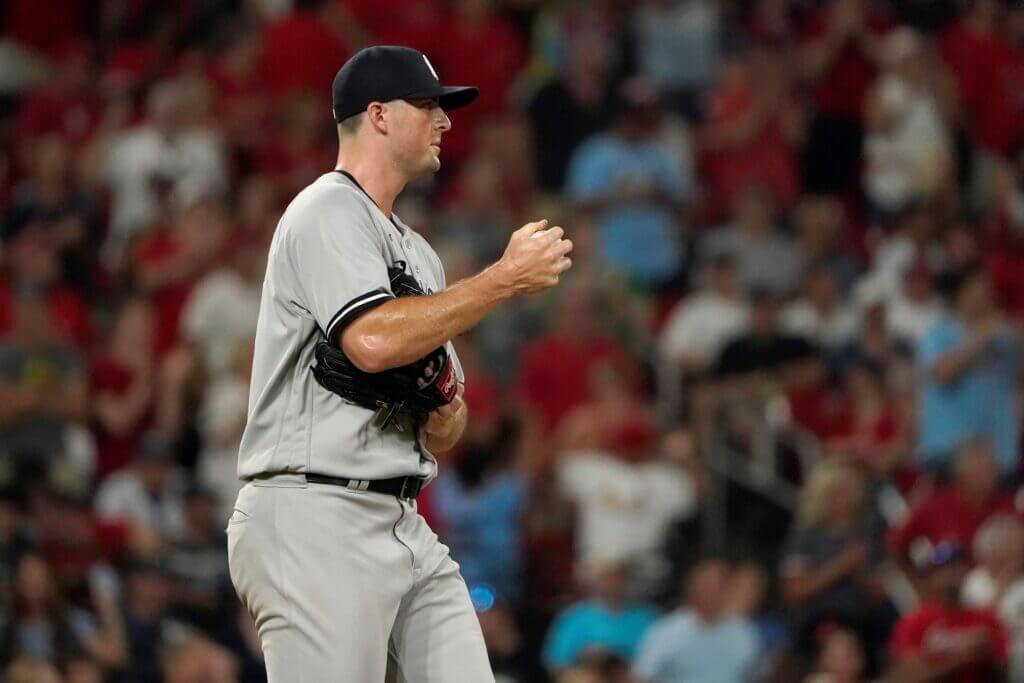 ST. LOUIS — Aaron Boone lamented earlier this week how he felt like All-Star closer Clay Holmes hadn’t been as good as he was in the first half of the season where it felt like every time he was on the mound in a save situation, it was an automatic win for the Yankees.

Holmes had walked just five batters through the first three months of the season, held opponents under a .200 batting average, his WHIP was under 1.00 and he had only given up two runs. In his 11 appearances since the start of July, Holmes has allowed nine runs, 11 walks, 14 hits and three hit batsmen in 10 innings of relief. Put simply, Holmes has not looked like the dominant reliever for a while now.

Boone went to Holmes in the top of the eighth against the Cardinals with a 3-2 lead because they had the heart of their lineup up with NL MVP favorite Paul Goldschmidt leading off followed by Nolan Arenado. Goldschmidt hit a comebacker to Holmes and Arenado hit a weak dribbler to third for an infield single. Tyler O’Neill worked a walk on a 3-2 count then Paul DeJong, who was hitting .137 on the season and was sent down to the minors, laced an opposite-field double to right off a two-seam fastball that leaked over the middle of the plate scoring Arenado and O’Neill.

“I think something that has made me successful all year is limiting the type of contact I’ve given up to righties,” Holmes said after the game. “He was able to — the first pitch there — put a pretty good swing on there and hit a double down the line. That type of contact with runners on can’t happen. I need to make a better pitch.”

“That’s kind of baseball, some days… gotta just be able to make a pitch there.”

Clay Holmes discusses what went down in the 8th inning on Friday night 🗣#YANKSonYES pic.twitter.com/dx0cM6wvYv

When Boone spoke about Holmes’ recent struggles a few days ago, he felt like his delivery had been a bit off, but that wasn’t the issue Friday night. Holmes’ stuff wasn’t the issue; he did what he was supposed to, inducing weak contact from two of the best hitters in baseball, but it just so happened that Arenado hit the ball so weakly that Josh Donaldson wasn’t able to make a play.

Holmes’ recent woes, though, have put more of a focus on the Yankees’ closer position. Boone said after the Yankees’ late-inning collapse that the plan was to go to former closer Aroldis Chapman in the ninth inning to secure the lead. Chapman has pitched four consecutive scoreless outings, allowing just one baserunner and five strikeouts. That’s an incredibly small sample size to glean much from, but it’s encouraging that he’s looked like the Chapman who can be one of the league’s best closers. It’s just when he’s off, he’s wildly ineffective — which he was in May and almost all of July.

There’s been some regression to the mean for not just Holmes recently but the Yankees, too. They’ve been playing just .500 baseball (21-21) since June 19, but because they’ve built such a lead in the AL East, it still feels like the division isn’t in question. But the best record in the league will be in jeopardy if they can’t get back to closing out these kinds of games like they were for the first three months of the season.

• Anthony Rizzo was scratched from the lineup just minutes before first pitch with what the Yankees called “low back tightness.” Rizzo missed four games with the same issue in July, but Boone relayed that the first baseman said it didn’t feel similar to what he experienced last month. Rizzo ended his batting practice session early because of the back pain.

• Donaldson has started to show a little life in his bat of late. He had three hard-hit balls in this game, on one of which he was robbed of an extra-base hit by a diving catch from Lars Nootbaar in right-center field. If Donaldson can get going down the stretch for the Yankees, it would be a huge boost for a lineup that can sometimes feel too dependent on the top three guys (DJ LeMahieu, Aaron Judge and Rizzo) to produce every at-bat.

• Andrew Benintendi secured his first legitimate hit as a Yankee in the top of the seventh with a rope down the right-field line for a double. His only other hit since the Yankees acquired him from Kansas City was an infield dribbler; he was 1-for-23 prior to the double. Boone was asked about Benintendi’s slow start: “He’s the last guy you worry about because he’s such a good hitter and he’s going to barrel the ball up. Right now when he does hit it off the barrel, he’s hitting a one-hopper. He just missed a ball to left field. I thought he hit it pretty good. He’ll be fine. He’ll get it rolling here.”

• Gleyber Torres snapped an 0-for-20 streak with an RBI infield single. His first two at-bats in Friday’s game were particularly wretched; he struck out twice and wasn’t close on all of his whiffs.

• Aaron Hicks is now 0 for his last 29 at-bats. He’s just not getting much hard contact at the plate right now.

• Prior to the game, Boone said Zack Britton threw 14 pitches before the team left for St. Louis. He’s expected to throw more this weekend and another bullpen early next week. That’s good news for a bullpen that has shown some cause for concern.

(Photo of Clay Holmes after giving up a two-run double to the Cardinals’ Paul DeJong in the eighth inning Friday: Jeff Roberson / Associated Press)

The Sandman: ingenious TV that will inspire an entire generation of goths

What do Miss Great Britain 1957 and Ben-Hur have in common? The Saturday quiz